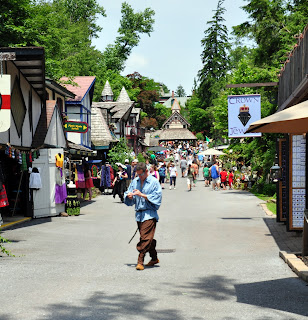 Not that Renaissance festivals really just celebrate the European Renaissance anymore -- if they ever did. Rather, they celebrate American lunacy and (mis)interpretation of the 1500-1600s in Europe. And that's just fine by me. But if women went around with fairy wings strapped to their backs or furry tails attached to their rears back then, well... they wouldn't be doing it for long, or else they'd find themselves strapped to a stake with flames licking their ankles. And despite how most of the women are dressed at these festivals, I seriously doubt it was either so colorful or so boobalicious, except among a certain sort... 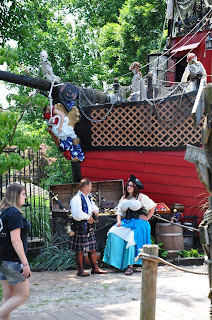 But this is what makes going to these festivals fun -- the joy of life of all those who show up in period costume and just enjoy the day and dressing up and playing make-believe. I keep promising myself that one of these years... 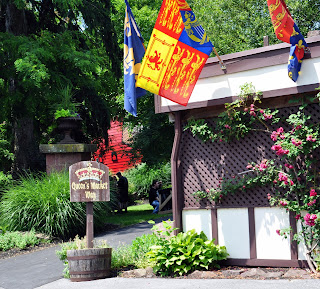 The Celtic Fling, at the Mount Hope Estate in Manheim, PA, occurs late June every year, is likewise visually interesting and fun, and yes, kind of hokey in an "eww, they're old, should they really be wearing that" sort of way. But then, look who's enjoying themselves the most? I think maybe they have a point. Well, maybe next year I'll dress up! The Fling takes place on the grounds of the Pennsylvania Renaissance Faire, which starts in August and runs through October. Folks dress up for the Celtic Fling much like they would dress for the Renaissance Faire, only with more green and men in skirts kilts.

There's plenty to eat, plenty to drink, plenty to buy. There were several booths offering various wiccan accessories, with a plethora of herbs, crystals, and animal skulls -- another anachronism for a festival supposedly celebrating an age of religious absolutism. Foodwise there's plenty, regardless of what you like. The Scottish eggs were tempting, although we settled for the safer fish and chips. 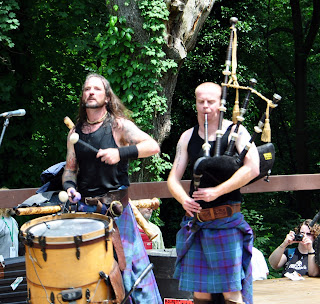 It's a nice place to walk hand in hand around, taking in the sights and the sounds. The games are fun to watch if you're interested in huge men tossing even huger poles like they're matchsticks, and there are a variety of other Highland games. Mostly, we enjoyed the various Celtic music groups playing at various stages in the venue. Our favorite group being Albannach -- a pounding combination of drums and bagpipes played by sweaty men with long hair and gorgeous Scottish accents. (I believe it may be hotter here in Pennsylvania than back home in Scotland.)

Know before you go: If you get there early, it's both cooler and fewer drinkers -- more a time for families with kids. There are weapons and gunfire demonstrations, and a few games geared for kids.