A little bit of local history, a lot of old fashioned storytelling, and almost no scary, a ghost tour is a great excuse (if you need one) to walk slowly up and down the main street of Ellicott City, hand in hand with that special someone, on a summer evening. The ghost tours (there are several to chose from) take about an hour, and are a fine compliment to a nice meal at one of Ellicott City's restaurants. 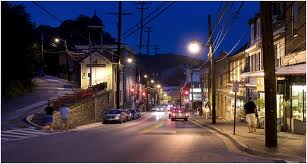 
So are the ghost tours in Frederick, Annapolis, and Baltimore. Not to mention, "Part 1" of the Ellicotty City Ghost Tour. Ellicott City is haunted enough, apparently, for Part 1 and Part 2, as well as a Spirits of Ellicott City Tour -- a pub crawl, where I guess, you can go inside and drink and potentially see for yourself the ghost in the mirrors behind the bar. By the way -- the local establishments cheerfully play along with the ghost tours -- while standing outside one bar, the wait staff flickered the lights on and off, almost on cue, garnering a few nervous laughs. 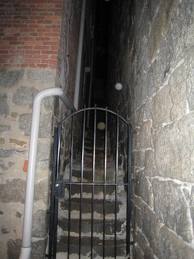 Part 1 and Part 2 Ellicott City ghost tours run on alternating weeks, so when Ed and I decided to go on the tour a few weeks ago, it was Part 2 week. Although interesting -- mostly for the tidbits of local history, such as the fact that Ellicott City used to have an opera house --  the tours are light on scary.  Another piece of history I learned was that Confederate soldiers were often help prisoner in one of the buildings before they were boarded onto the train and shipped off to god knows where. One such Confederate is now a local ghost -- having made the somewhat dubious decision to try to escape, necessitating a flight down a long, narrow stone flight of stairs between two buildings, during which descent he was gunned down by those in pursuit. His body tumbled the rest of the way down. Supposedly you can still hear his footsteps running, the sound of his boots echoing down the narrow stone steps, and then the sound of a body thudding down to rest at the base of the stairs, near the street. Personally, I'm glad there's no need for me to ever climb or descend those stairs.

Fans of SyFy's Ghost Hunters show know that the Confederate ghost is what is known as a residual haunting, versus an intelligent haunting, which would be a ghost that can interact with the living. But thee were some of those mentioned during the tour, including a dinner guest ghost and the ghosts at Kaplans Department Store. 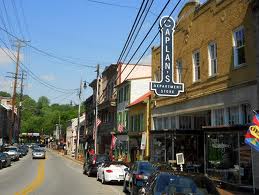 Part 2 included a bit too much about hauntings experienced by former and current ghost tour guides. One wondered whether they're predisposed to be haunted? But nevertheless, I'd like to hear the rest of the tales and decide for myself whether Ellicott City's Main Street is truly the most haunted mile in Maryland.

Getting there: 8267 Main Street in the historical district. Parking behind the building.

Dogs: Well behaved pooches welcomed on First Friday tours! (Although not on the Spirits of Ellicott City Tour.)