My boys are generally not enthusiastic when I announce that we're heading out for another house tour. And if I recall correctly, it wasn't until I was in my 20s that I began enjoying touring old homes. I've often wondered what it is about us -- or maybe about me -- that figures, if our parents did it to us, then we can do it to our kids (at least, when it comes to daytrips). I remember schlepping through colonial homes, plantation mansions, and many a Victorian mansion as a kid. Now it's my turn to inflict this all on my kids....

For the record, mom and dad never took my sister and I to see Fallingwater. 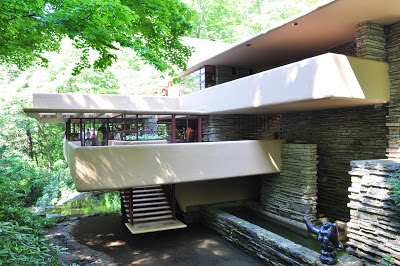 However, Fallingwater was one of those surprises for my boys, when their relatively docile (no, not so much) submission to another one of mom's whims turned out to be interesting, even enjoyable. Certainly, the house engaged their imagination in a way that as their mother, I was quite pleased to see. 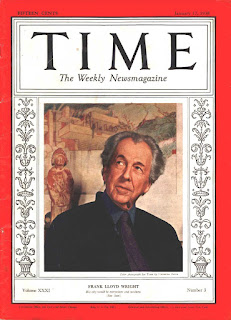 Fallingwater -- possibly rating as one of the top 5 most famous homes in the U.S. -- was the summer weekend home for two decades of the Kaufmans, of Kaufmans Department Store in Pittsburgh, and was designed for them by Frank Lloyd Wright in 1935. Almost forgotten in his late 60s at the time, his work on Fallingwater helped spark Wright's renaissance as a great American architect, and over the next two decades, he'd design another 400 buildings, including the Guggenheim Museum of Modern Art in New York City. (Hmmm, do I sense another day trip?)

The hour-long house tour brings you into every room but the kitchen and servants quarters and moves quite quickly through the spaces, explaining the architecture and Wright's philosophy of architecture, and artistry in the spaces, as well as how the Kaufmans and Wright interacted and negotiated over the design. It is easy to imagine yourself as Liliana Kaufman, getting up in the morning to take a dip in a spring-fed pool, or go relax in the sun to while lulled by the sound of the waterfall below.

I won't go into more detail about the house -- something like 30 books (and maybe more) have been written on the topic. After the house tour, walk around the grounds and grab a photo of the famous "postcard shot." The grounds are lovely in their own right -- well worth a walk in the woods. 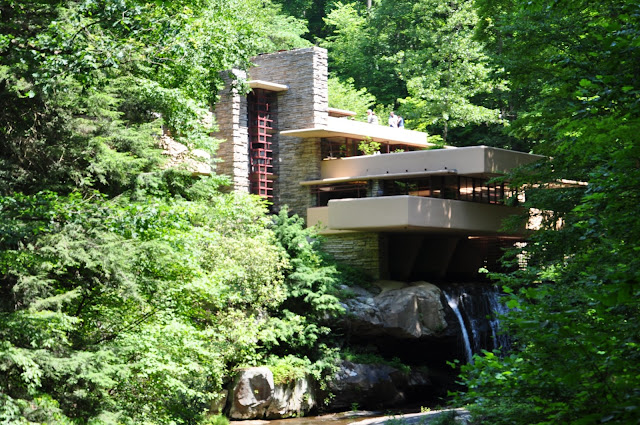 Know before you go: If your kids are older or if it's an adults-only trip, then go out to the other house Wright designed in the area: Kentuck Knob, just seven miles away. You also need tickets for that home. Children younger than 6 not allowed in the house. Children younger than 10 or 11 likely to be bored to tears. Get advance tickets online or by calling 724-329-8501.

Dogs: Leave your furry friends at home for this day trip.

Eats: Food is available at an onsite cafe, with the usual markup for a captive audience. The parking lot has some shade, so we packed a picnic and ate it in the parking lot. Worth noting -- you're just a few minutes away from Ohiopyle, where there are several cute cafes.