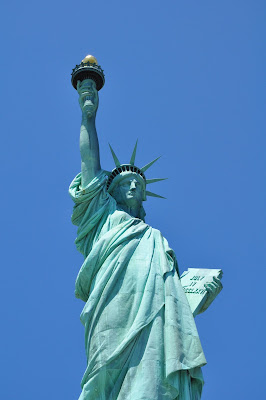 Every once in a while I'm going to throw in some favorite day trips that the boys, Ed and I have taken, like the one we took to Ellis Island and the Statue of Liberty. That was a year ago -- Liberty was being renovated, and unfortunately, we couldn't go up to the top.

Then, a few months later, Superstorm Sandy struck. Sandy made landfall one day after the statue's 126th birthday, flooding most of the 12 acres she stands upon with water that surged as high as 8 feet. Railings broke, docks and paving stones were torn up, and buildings were flooded, according to news reports. The storm also destroyed boilers, sewage pumps, and electrical systems. Lady Liberty itself survived just fine (symbolic, really). The National Park Service only re-opened Liberty Island this past Independence Day.

A gift from France, the statue was intended to symbolize the friendship between the two countries and their shared love of liberty. Although France is hardly this country's best friend -- and one could argue that perhaps we're not a free as we'd like to be-- the statue has endured as a beloved American icon. It was dedicated in 1886 and welcomes about 3.5 million visitors every year. I wonder whether we've ever given another country such a gift as France gave us. 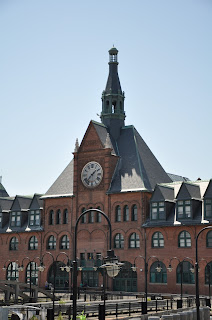 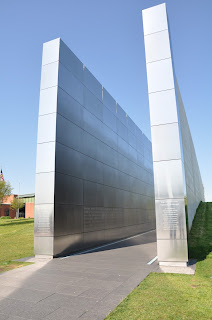 
After we had a quick picnic and boarded the ferry, the spectacular views of Manhattan grabbed our attention -- it's worth just riding the ferry, even if you don't get off! (Well, maybe not, but it's a thought.)

Our first stop was Ellis Island. We toured the exhibits and museum, considered looking up our last names and then gasped at the lines and decided against it. We appreciated the architecture of the building, and the conditions incoming immigrants must have faced -- how crowded and smelly and confusing it all must have been! The exhibits detailed the countries the immigrants came from and what might have prompted them to come, as well as highlighted where they ended up -- not all settled in New York City, although many (most) did. Most poignant? The row of luggage in the main hall.

From there we entered another line -- again, causing us to sympathize with the immigrants and all the long lines they'd had to endure -- this time the line was for the ferry to take us over to Liberty Island. It was a fairly short ride and suddenly, we were there.

Since we couldn't go up into the crown, we walked around the base, taking in the views of New York City and the harbor, as well as looking up at Liberty herself. It was pretty awe-inspiring. Even if you've been there before (say, as a kid), it's worth seeing again. The photo ops will garner post-card images of Manhattan. 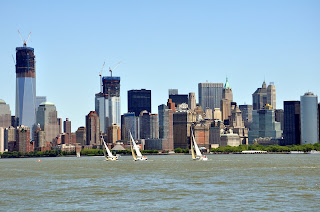 Things to plan for:

Getting there: Liberty State Park, NJ, is at Exit 14b on the New Jersey Turnpike. It is well-signed and easy to find.

Dogs: They're allowed in the park (leashed) but not, obviously, on the ferry or on Liberty Island, and of course, you can't leave them in your vehicle. They'd be happier at home, chewing on your furniture.

Eats: There are concession stands on all the ferries and also concession stands and gift stores on both Liberty and Ellis Islands. There are also picnic tables at Liberty State Park -- so pack a cooler and a picnic basket and eat before you board the ferry.