The plan: bring the boys to one of my favorite spots, Cunningham Falls, in Cunningham Falls State Park, not far from Thurmont, MD. Climb the falls, like I did when I was a kid, tell them the ghost story told to me when I was in 6th grade (for which I can find absolutely no supporting evidence, although there have been "ghostly images" photographed -- not by me -- in and around the falls -- intriguing! But I digress...). The last part of the plan: picnic in some scenic spot and thoroughly enjoy the absolutely gorgeous, 60-degree F August weather. 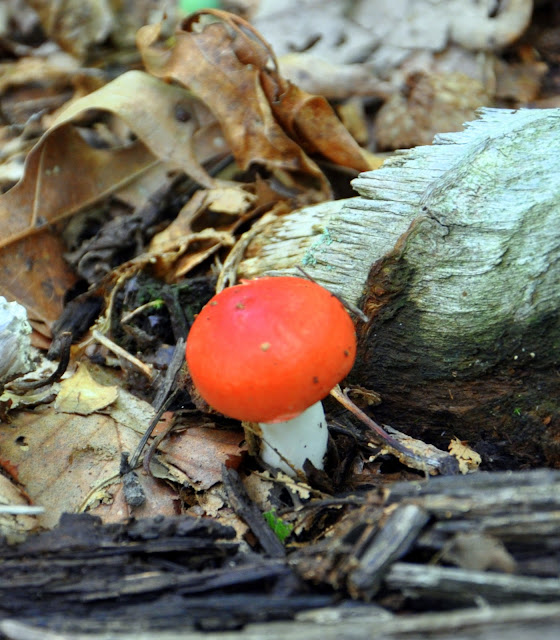 So I packed up the kids, the picnic lunch, and grabbed the two beagles, choosing to leave the greyhound mix behind because we'd taken him hiking the day before and his legs were still wobbly (he'd had double knee surgery as a puppy and never developed great stamina for long hikes multiple days in a row).

I've been going to Cunningham Falls since I was a kid. I've gone on romantic dates there (picnic breakfast on the falls!!), I've brought college friends there... it's just one of those places I love and want to share with people I care about. My mom and I have brought the boys there multiple times -- but not within the past few years. It was time to go back.

I didn't bother to check the state park's website. I knew where Cunningham Falls State Park was and what was there. 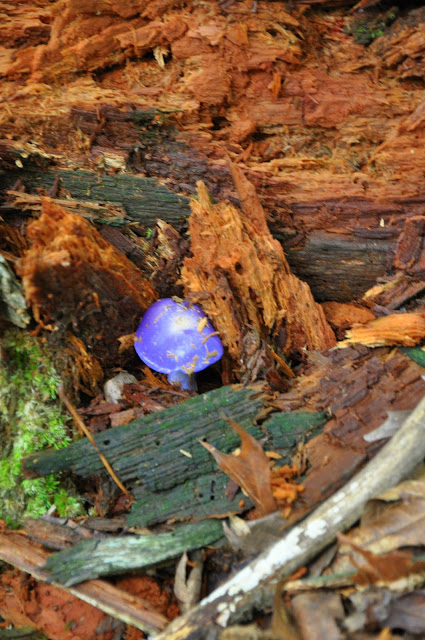 So the anti-dog signs were an unwelcome surprise as we drove up to the gated, manned entrance to pay the minor entrance fee. The beagles helpfully barked hysterically at the gal collecting entrance fees as I tried to determine whether there were any trails in the park that I could bring the dogs along on (the day was too fine not to spend it walking in the woods). She made me turn the car around.

Sigh. Onward to Plan B.Luckily, there was a Plan B, although I was making it up on the fly. You see, Cunningham Falls State Park is smack dab next to Catoctin Mountain National Park. I decided to go to the national park's visitor center, grab some trail guides, and head out on an easy hike.

Sadly, the visitor's center was closed, a victim of sequestration, I bet. We perched on a rock and silently ate our lunches. The boys complained about how cold they were. In August!!! The beagles, left in the car during the picnic lunch, made friends everywhere by continuing to bark and bay hysterically. Several of the other visitors in the parking lot were amused, but some where not. The day was NOT going well. 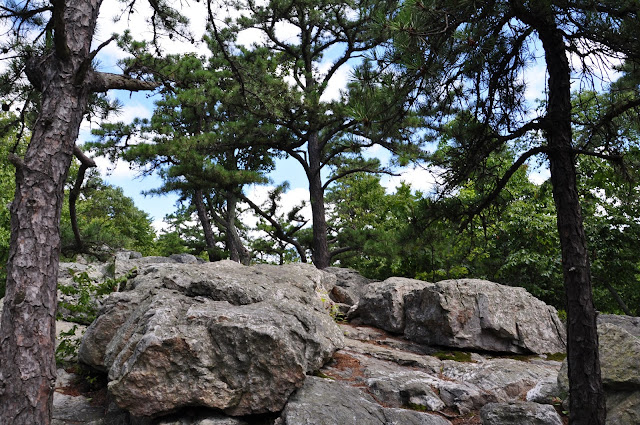 There were some trail head signs at the end of the parking lot. We were in luck! The distances seemed doable -- between 1.5 and 3 miles there (there were several options to chose from, including Hog Rock, Wolf Rock, and Chimney Rock). Well, it was more like, I chose, because the boys were all for going home at that point, although one of them was willing to go to Chimney Rock because the starting trail looked flat, while the others headed straight up the mountain, but that was farthest out and I had an appointment I had to go to later in the day. We opted for a shorter one -- Wolf Rock -- and hoped for the best. 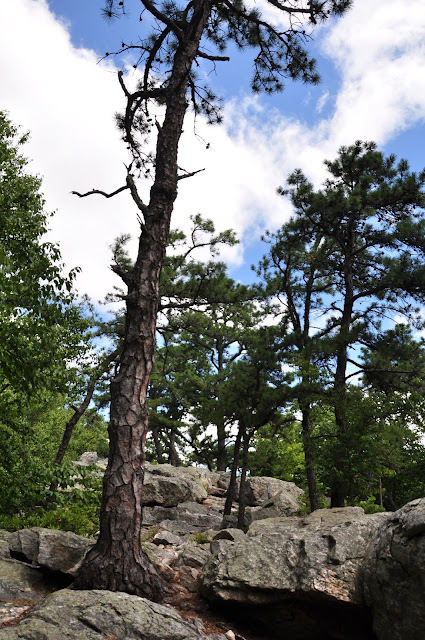 Had I read a description, I probably would never have chosen Wolf Rock. No view. But oh, how magnificent a place, in and of itself -- photographs, at least not ones I'm capable of taking, don't do the place justice. Wolf Rock is a huge rock jutting out of the mountain, that seemed to be the size of the mountain itself. Hardy pine trees colonized the top, but otherwise, it loomed above the treeline a bit. The sense of serenity atop that rock is awe-inspiring.

Wolf Rock is part of the exposed Catoctin Mountain bedrock of quartzite (so it really is the mountain itself). 500 million years ago, this rock was the sandy bottom of some mysterious sea. It was compressed and crystalized from the forces at work when the Appalachian Mountains uplifted 200 million years ago. Quartzite erodes slowly, so it often forms ridges like Catoctin Mountain.

Despite the "no view," the hike -- pretty much straight up the side of a mountain for 1.5 miles -- was deemed "worth it." This from two brothers who'd complained and lobbied to turn around for most the trek there. This would be an ideal place to come back to in the fall for leaf peeping! Hmmm. And after Labor Day, I could bring the mutts along to Cunningham Falls too. 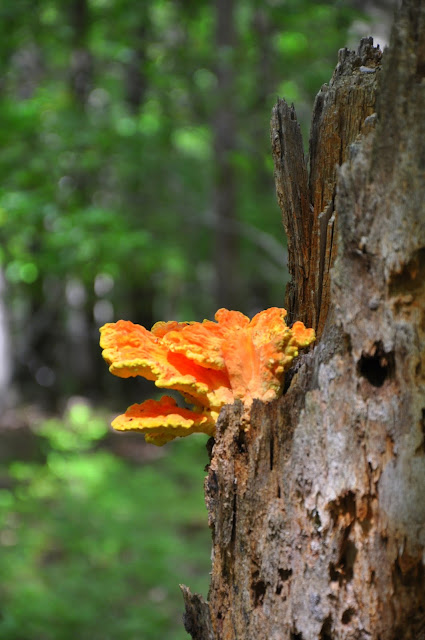 When I got home I finally checked the Cunningham Falls State Park website. Buried in the info is the tidbit about dogs being banned between Memorial Day and Labor Day, which says to me that there is no real reason not to allow dogs, but that's the subject of another blog, perhaps. Anyway, lesson learned: even when I head out to a place I've been many times, it's worth checking the website. You don't know what you don't know!

Eats: Thurmont, just a few minutes away, offers a variety of restaurants, including myriad fast food. But best choice of all: pack a picnic and find a rock to sit on and enjoy your beautiful surroundings in the park! 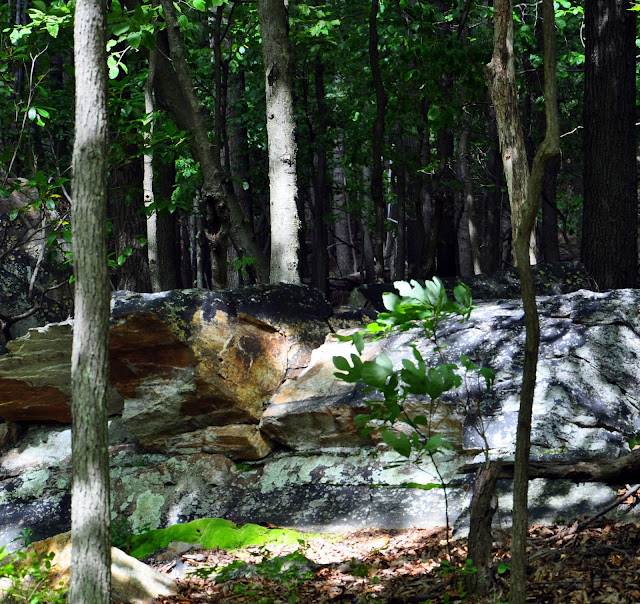