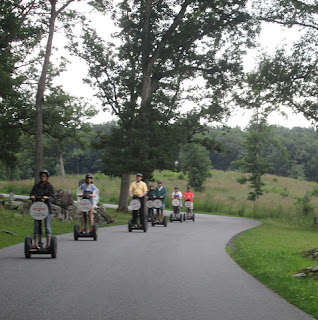 I have been visiting Gettysburg periodically for as long as I can remember. I grew up in Frederick and drove through the battlefields (on route 34) to visit my aunts and uncles and cousins who lived just north of Gettysburg my entire childhood. Even as an adult, I found myself returning there every few years, trying to understand the orders of battle and the significance of J.E.B. Stewart's not reporting in prior to the three days of battle, and exactly why Pickett's Charge was such a bad idea...

I read many books -- from Shelby Foote's trilogy series on the Civil War to Sears' Gettysburg to one of my favorite books on the battle, James M. McPherson's Hallowed Ground. Still, when I got the battlefield, my understanding evaporated in the face of the bouldered Devils Den and the Big Round Top and Little Round Top and the Peach Orchard (where was that, exactly?), and despite all that reading I would wonder, what happened here?

I tried the narrated battlefield tours -- those got me a step closer, but still, I found being in the car was an obstacle to the sort of understanding I sought of the events that raged across those fields 150 years ago.

Last year hubby and I were driving through Gettysburg, on our way home from a family reunion, and we noticed some segways zipping through the battlefield. We looked at each other and decided, right then and there -- we wanted to do that! Fast forward to a couple weeks ago -- when we made reservations with Seg Tours for the Western Battlefield Tour -- three hours riding a segway, with a narrated tour and a guide. 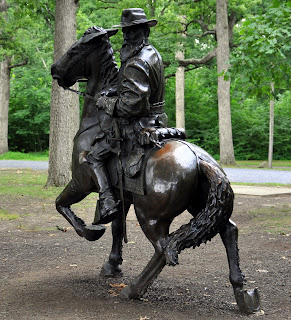 The narration paced with the speed of the segways, with four brief stops, one of which included a delightful mid-morning snack of grapes, cheese and chocolate! SegTours also provided two cold water bottles in the carrying case in the front of the segway, a thoughtful gesture that would make a hot day bearable. 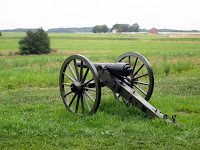 Before we headed out on the tour, everyone spent 30 minutes of training, including both a safety video and individual instruction on an indoor obstacle course, which you must feel comfortable on before they set you loose on the roads and streets of Gettysburg and the battlefield. The segways are quite easy to master (even I felt comfortable after 10 minutes on one), and they are wonderfully fun -- nevermind the battlefield tour, I felt like a kid on my skateboard, except more in control (I never really mastered skateboarding). 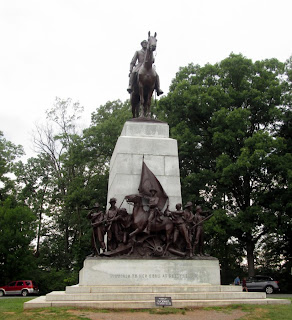 Pickett's Charge started from, and a close-up look at Confederate General Robert E. Lee's statue, overlooking the fields of Pickett's Charge, which ended so disastrously for the South. Interesting to note: Lee's famous horse, Traveler, had thrown him just before the battle and he'd been mad at the horse, so he was riding a horse named Lucy throughout the Gettysburg Battle. Unfortunately for Lucy, she was a smaller, less majestic horse than Traveler, so when it came time to depict Lee upon a horse for a Gettysburg monument, Traveler was chosen, even though he'd not actually been there.

This first part of the tour was beautiful -- traveling down the tree-lined Confederate Avenue and seeing where the Confederate lines had been positioned, and because we weren't traveling as fast as we might have in a car tour, I noticed a beautiful monument, which easily might be my favorite of all: the Louisiana State Monument, on Confederate Avenue, opposite Pitzer Woods. 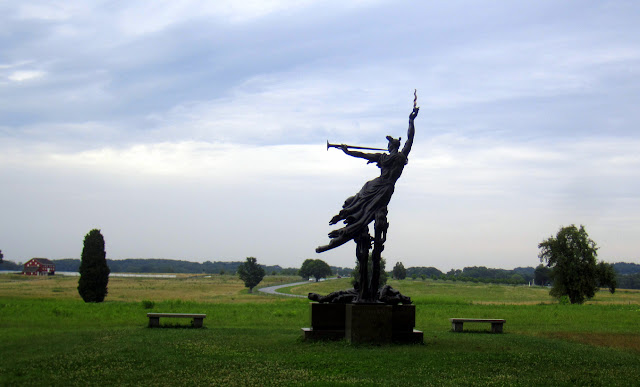 From Confederate Avenue we traveled east toward the Peach Orchard and the Round Tops. We wound our way down toward the rocky Devil's Den (and we saw where Sickles should have positioned his troops but didn't, and how that almost lost the battle for the Union but how it was saved just in time) and then up the hill to Little Round Top, for the second and third stops of the trip.

From there we segwayed to what is often referred to as the High Tide of the Confederacy -- where Picketts Charge, despite the casualties incurred by Southern troops, had come with a dozen or so yards of winning the war for the Confederacy.

After the tour (if you go in the early morning), there is still much to see and do at Gettysburg. Visiting the Park's Visitor's Center and seeing the Diorama is a must-see. Consider visiting the Gettysburg Museum of History, featuring relics from the Civil War and the local battlefields. And don't overlook the nearby Eisenhower National Historic Site, the home and farm of General Dwight D. Eisenhower, 34th President of the United States.

If you get historied out, Gettysburg offers a variety of antique and boutique stores, and walking through Gettysburg is enjoyable in its own right. There are several wineries nearby, as well (Adams County Winery, Reids Orchard and Winery, among others. If you stay until evening, there are a variety of ghost tours offered (Ghosts of Gettysburg, Gettysburg Ghost Tours, Ghostly Images of Gettysburg, among others), including one that takes you back onto the battlefields, which are open until 10 p.m. In fact, I can see already opportunities for future blog entries on Gettysburg! There is enough to see and do for several days spent in Gettysburg, and there are a number of lovely bed and breakfasts in the area.

There are also other ways to tour the Battlefields, if riding a segway doesn't appeal. Several places offer guided horseback rides through the battlefield (Hickory Hollow Farm and Confederate Trails Horseback Tours, among others), and GettyPeds offer moped and scooter tours through the park.

Interesting note: although it was August, it was overcast, cool, and fairly early in the morning. In fact, it was unexpectedly chilly. Had we brought along light wind breakers, we would have been more comfortable. The segways had carry bags on front of them where a wind breaker could have been stashed "just in case." Wear comfortable shoes -- on the segways posture and balance are everything, and it's hard on your feet, ironically.

Hours: Check the SegTours -- or other tour websites -- for tour hours and fees.

Eats: Lots to chose from in and around Gettysburg. Beware the over-commercialized "historical pubs," which are pricey but not anything special. If you just want quick eats, there's plenty of fast food as well.

Learn about the various monuments in advance: http://www.virtualgettysburg.com/

National Parks website for the Gettysburg National Battlefield: http://www.nps.gov/gett/index.htm
The mission of the National Park Service and its partner, the Gettysburg Foundation (http://www.gettysburgfoundation.org/) is to provide each visitor with a quality experience while visiting the Museum and Visitor Center, walking the Soldier's National Cemetery where President Abraham Lincoln delivered his famous Gettysburg Address, and while touring the battlefield park.