Rediscovering a River: Kayaking on the Potomac

One of the reasons living in Maryland is so fun is the proximity to some great cities (Washington DC and Baltimore are in our backyard, Philadelphia is a couple hours away, and New York City is a mere 4 hours away); access to spectacular natural resources (Chesapeake Bay, Potomac River, Deep Creek Lake to name a few), and a state park system that runs the gamut from beaches (Assateaque State Park, Sandy Point State Park) to mountains (Herrington State Park, among many others). If you want large city, small quaint town, water experiences, historic sites, farmland, or forested mountains -- Maryland's got it, within an hour or two drive.

Sometimes we take those resources for granted. I don't know how many times I've ridden over the Potomac River, on I-495, U.S. 15, or U.S. 340, sometimes barely glancing at the water below. 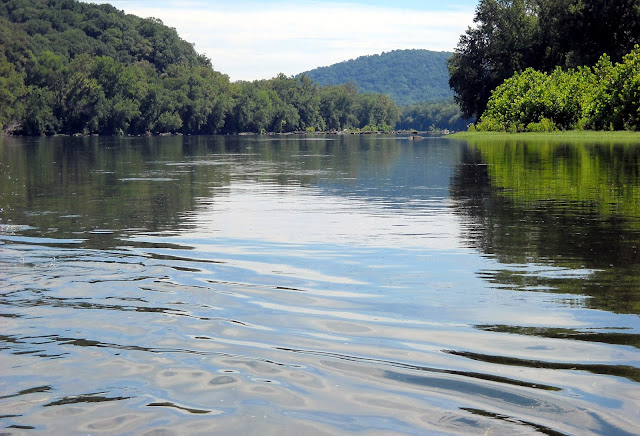 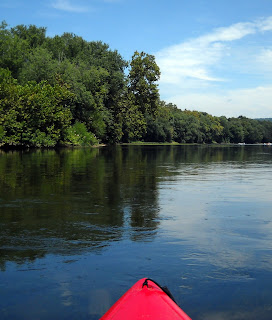 The Potomac River flows into the Chesapeake Bay, running 405 miles from the Fairfax Stone in West Virginia to Point Lookout, MD. "Potomac" is a European spelling of an Algonquian name for a tribe that inhabited what is now Stafford County, VA, in the vicinity of Fredericksburg. The spelling of the name has changed over the years from "Patawomeke" (as on Captain John Smith's map) to "Patowmack" in the 1700s, and now "Potomac."

It's a river rich in history. Flowing through an area filled with American heritage has led to the river being nicknamed "the Nation's River." George Washington was born in, surveyed, and spent most of his life within the Potomac basin. All of Washington, DC, also lies within the watershed. The 1859 siege of Harper's Ferry at the river's confluence with the Shenandoah was a precursor to numerous epic battles of the Civil War in and around the Potomac and its tributaries, such as the 1861 Battle of Ball's Bluff and the 1862 Battle of Shepherdstown. General Robert E. Lee crossed the river twice, invading the North in campaigns climaxing in the battles of Antietam (Sept 17, 1862) and Gettysburg (July 1–3, 1863). Confederate General Jubal Early crossed the river in July 1864 on an attempted raid on the nation's capital. The river not only divided the Union from the Confederacy, but also gave name to the Union's largest army, the Army of the Potomac. 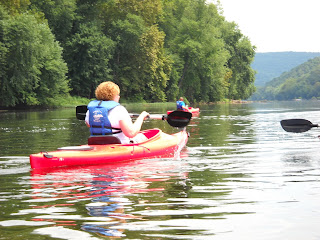 There's nothing like seeing a river from the level of the water itself. Numerous businesses that can bring you closer to the river are spread out along its length. River & Trail Outfitters is just one, offering kayaking, river tubing, canoeing and white water rafting excursions throughout the year. I've been kayaking a few times before and have always enjoyed it. Sort of want a kayak of my own, although ultimately, I think that's impractical unless I'm ready to dedicate myself to going every weekend (and that would make for a boring blog), or if I lived near water and could slide the kayak in from my home. We got started on kayaking when we took the boys kayaking last fall on an introductory lesson on Lake Centennial, in Columbia, MD. Learned basic paddling techniques and how not to tip over. They had a blast, and as a family, we were hooked on kayaking! 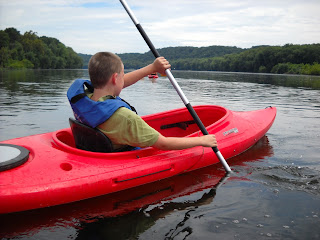 the best shape to be able to enjoy it, I recommend taking beginner lessons if you've never kayaked before. These lessons give you basic paddling techniques -- how not to paddle with your arms, and some paddle strokes that can get you safely going again if you accidentally beach onto a submerged rock. Although I'll never remember the correct names for some of the strokes, the strokes themselves are easy to remember and bear practicing each time you're out kayaking.

If you rent kayaks, it's also good to spend 5 minutes at the beginning of the session just getting used to the kayak and how it handles. The ones we had this time didn't seem as tippy as ones we've rented for an afternoon from the Howard County Parks and Rec -- each kayak model handles just a bit differently, and it's good to know that before you're in the middle of a river or lake.

The Discover Kayak lessons through River & Trail Outfitters began out of Brunswick, MD and took us on a guided excursion 6 miles down river to the landing point at just past the U.S. 15 bridge across the river at Point of Rocks.

The guide for our trip, Travis, was knowledgeable, patient, and understanding when my youngest asked for a "breather," during which we didn't paddle but simply floated down the river, letting the current do all the work. Along the way we saw many heron, a few ospreys as well as cormorants by the dozens.

I'm posting this several weeks after we went on this daytrip adventure, and I realize I'm sad that we're at the end of the kayak season (wet suits don't become me). I can't wait for next spring! 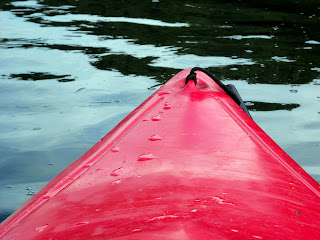 Tips: Even if it's cloudy or even raining, put on sun screen. You never know when the sun will come out and you don't want to be stuck on the river without sun protection. Have sun glasses and a hat as well. (In this case, do as I suggest, not as I did. It was raining as we entered the water. Within 10 minutes, the sun came beautifully out but sunblock was left in my car, useless to us. My lower legs and arms and face are still hurting from one of the worst sunburns I've gotten in the past decade.)

Dogs: Some folks have trained their dogs to ride in kayaks, but unless you're a dog whisperer, leave Fido at home!

Eats: If you're going on a longer trip, bring snacks in water proof bags. Definitely bring water bottles to carry with you in the kayak. 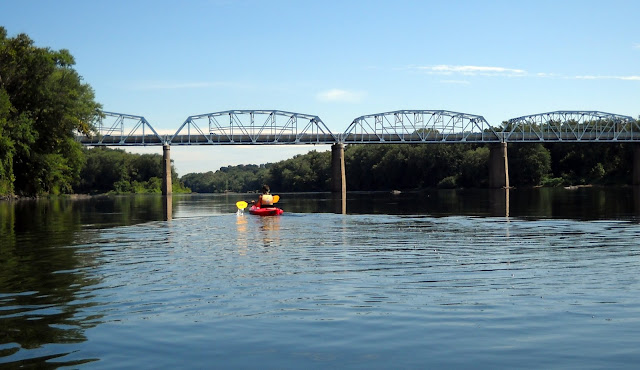 Have you daytripped somewhere interesting? I'd love to hear what you're doing! Email [email protected] if you're interested in being a guest-blogger!
Posted by Jody Arneson at 6:12 PM