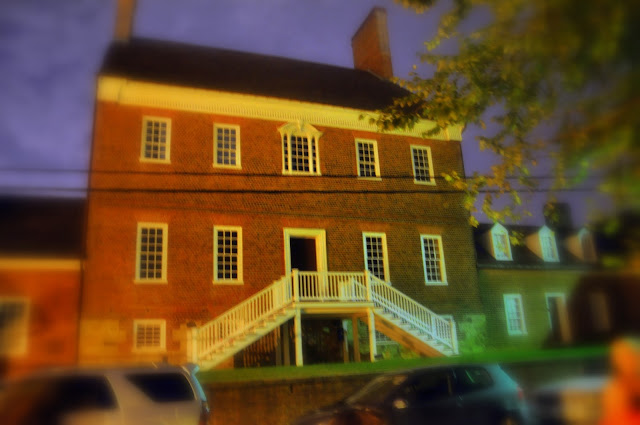 Looking for something low key and romantic to do, I talked Hubby into joining me for the Annapolis Ghost Walk. Annapolis is a frequent destination for us -- just 30 minutes away from Columbia, MD. The historic capital of Maryland's harbor draws us on many a hot summer's night, as nothing is more fun or romantic than having an ice cream and strolling around downtown. 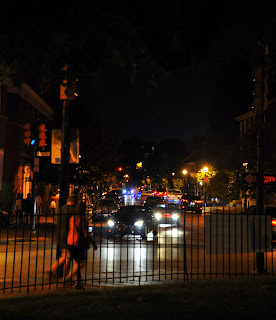 So we grabbed our beagles (yes, well-behaved dogs are welcomed on most ghost walking tours) and showed up for two hours of story telling and local history that you won't get to read about in the history books.

Originally we planned on having dinner in one of Annapolis' many pubs -- maybe the Rams Head, also said to be haunted by ghostly Amy. But friends unexpectedly invited us to join them at Indian buffet at the Royal Taj in Columbia (well recommended, btw) and we were still full from that meal, so we decided to skip dinner and just have ice cream instead.

But back to the Rams Head, as that was featured on our ghost tour: From the 1700s, 33 West Street -- where Rams Head Tavern now is -- has always been the locale of taverns. In the 1790s, according to our tour guide Melissa, it was, in addition to a tavern, a "house of entertainment." A tragic tale of a mother prostituting her own daughter out, weak floor boards, an enthusiastic client, and Amy's occupied bed coming crashing through the ceiling, instantly killing Amy, who's said to now haunt the location. Apparently you can ask the bartender to show you where Amy's bedpost is still embedded in the ceiling. I wish I'd know when we'd been there a while ago! 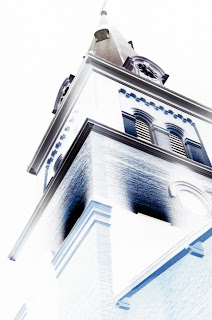 We also heard about the disappointed bride and her sea captain fiance -- both of whom are said to haunt the Maryland Inn. The inn also hosts the Flapper (name unknown), dressed head to toe in the style of the roaring 20s, who's said to run shrieking up and down the hallways on the 3rd floor every month.

From there we walked over to the cemetery in the St Anne's Episcopal Church churchyard, and heard about "Joe Morgue," who is said to haunt the graves he dug and was obsessed with during his life. There was a Monty Pythonesque story about Joe Morgue and his digging a grave for a man in a diabetic coma. The man woke up while being carried in his coffin, and the funeral was subsequently cancelled, to the great happiness of all but Joe. This happened several times, each time Joe dutifully and 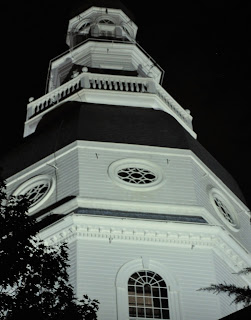 somewhat gleefully digging a grave for him, and Joe became more and more obsessed with the man, stalking him and accusing him of cheating death. Eventually the man died for real, but on the theory he'd already dug him more graves than he's dug for any other man, Joe refused to dig him another grave.

The statehouse sports its own ghost -- that of a man who died before he could be paid for his work, and his wife and children being shipped back to England without being given his tools or payment for his work. He's said to haunt the dome of the capital building.

Finally on to the Brice House -- now a Masonic Lodge. Not one, not two, but 16 ghosts are said to haunt the Brice House -- what an unhappy and unlucky family! From Thomas Brice, who's servant is believed to have clubbed him to death, to a girl-child who starved to death in a secret room, there's a ghost of every size and flavor. It was here that four photos I snapped in rapid succession revealed three orbs. The first and last of the four photos have no orbs at all. I didn't change my position, nor did I change anything else -- so are these orbs evidence of paranormal activity? I'm not a big believer in orbs -- so I will let you decide for yourself! As for ghosts themselves -- I'm agnostic. Having never seen one, I don't believe in them. But I'm pretty sure if ever I do see one, I'll probably pee in my pants. For full disclosure: I am scared of the dark -- my imagination is far scarier than any ghost. 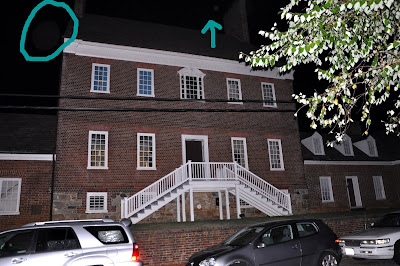 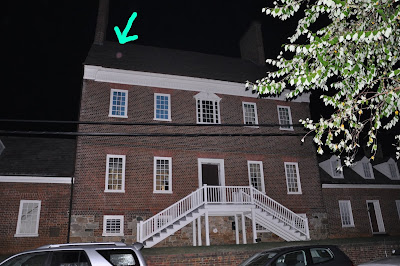 For more Brice House history and hauntings, check out this blog: http://ghostlyfreaknfuzz.wordpress.com/tag/annapolis/page/2/

Getting there: The Ghost Walk leaves from the Maryland Inn, which is located at Church Circle. However, an internet search for "annapolis ghost tours" reveals a variety of options for similar tours. There are also a variety of ghost pub crawls offered as well. Plan on parking in one of the public garages.

Hours: Tours occur on Fridays and Saturdays at 7 pm and 9 pm.

Dogs: Since the ghost walks all occur outside, well-behaved pooches are welcomed.

Eats: Plenty to chose from in downtown Annapolis. Eat first, then enjoy the ghostly tour! 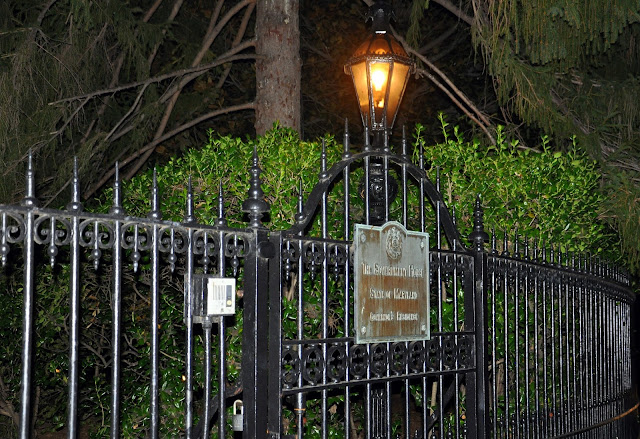