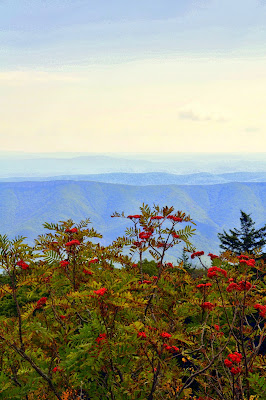 Sometimes the beauty of Dolly Sods Wilderness Area is subtle, sometimes breathtaking. Dolly Sods also serves as an abject lesson for us: it was the scene of one of the worst ecological disasters in the 20th century. Despite that, Dolly Sods has rebounded over the past century and now is truly one of the most special places within 4-hours drive of Washington DC and Baltimore. It is my favorite place.

Named for a German homesteading family who farmed the area in the 1700s -- the Dahles --  and a local term for an open mountaintop meadow — a "sods," Dolly Sods is a U.S. Wilderness Area in the Allegheny Mountains of eastern West Virginia, and is part of the Monongahela National Forest. It offers an exquisite, often stark beauty but it's also a living reminder of the unintended consequences of wanton and thoughtless disregard for the environment. 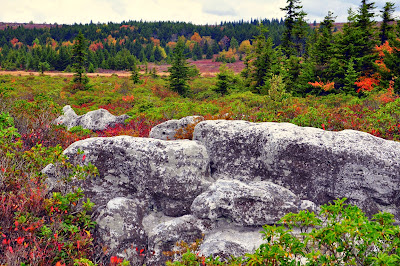 A rocky, high-altitude plateau with plants normally found much farther north in Canada, the landscape of "the Sods" is characterized by stunted, “flagged” trees, wind-carved boulders, heath barrens, and grassy meadows created early 20th century logging and fires, as well as sphagnum bogs that are much older. Parts of Dolly Sods is still densely forested, although not with virgin timber, especially in the canyon excavated by the North Fork of Red Creek. Bear, deer, and other small wildlife, are common. There's also a peculiar grouse-like bird who always seems to try to dart between our tires when we drive on the dirt roads up there (luckily, no animals were harmed in the research or writing of this blog). Larger birds -- hawks and golden eagles and the like -- are also frequently seen.

Once upon a time, Dolly Sods boasted the best spruce-hemlock-black cherry forest in the world, with some enormous trees up to 12 feet in diameter. Then came the loggers, clearing away the virgin forest to feed the voracious lumber mills and line the pockets of greedy lumber barons. As the land was cleared, the 12-foot thick layer of humus covering the ground dried up. Sparks from the locomotives, saw mills, and loggers' warming fires ignited this humus layer and the extensive slash — wood too small to be marketable, such as branches and tree crowns — left behind by loggers. Fires repeatedly ravaged the area in the 1910s, scorching everything right down to the underlying rocks. 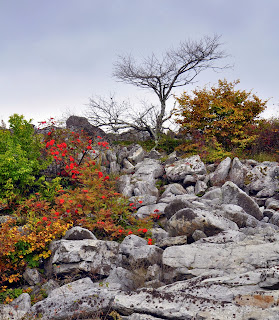 What was left was a lifeless, smoldering mess. All insects, worms, salamanders, mice, and other burrowing forms of life perished and the area became a virtual desert. The destruction was extraordinary. The complete clear cut of this ecologically fragile area, followed by extensive wildfires and overgrazing, exacerbated by the ecological stresses of the elevation, have prevented quick regeneration of the forest, which 100 years later still has not fully recovered. However, as a result of this disaster, the neighboring Monongahela National Forest was created in 1915, in an attempt to prevent the same sort of wholesale destruction that had swept over the Sods. Despite this early effort to protect our natural resources, the Sods underwent further indignities-- becoming an artillery range for heavy ammunitions in WWII. Every once in a while, hikers still come across unexploded ordinance, but usually not near the more well traveled trails. 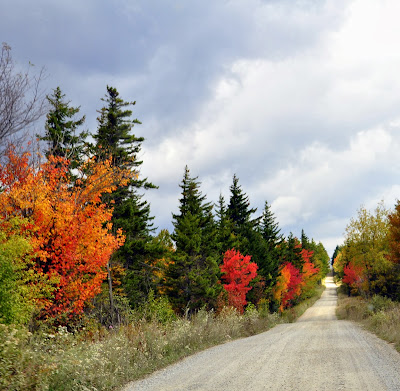 Our goal on that last day in September was leaf peeping. Because of the elevation, we figured that the leaves would be spectacular. We were mostly correct. The leaves had begun turning, but the amazing, breathtaking color of Dolly Sods -- the heather and the blueberry bushes, had already peaked and ebbed. Still beautiful. Still worth it. Still amazing. We breathed the clean mountain air, took in the views, enjoyed a picnic, did some light hiking along Bear Rocks, and headed back home. A wonderful, long, exhausting day trip! 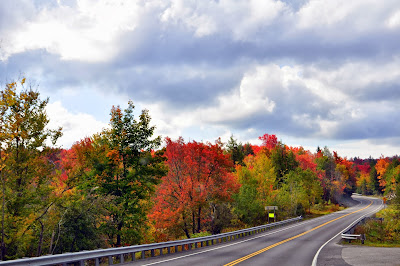 Just getting there was spectacular. As we traveled along MD Rt 219 we worried, needlessly, that the leaves
really hadn't begun turning. We were wrong, because as we climbed in elevation to the little town of Davis, in Tucker County, WV (elevation 3,200 ft), the forest put on its show!

One of my favorite things to do, if we're staying locally in Canaan Valley, is to go up to Bear Rocks (shown above) for the sunrise. On a July summer day, that means getting up at O-darkthirty (4 a.m.) and heading down Lanesville Road and then onto Forest Service Road 19 in the dark. (Scary!!) Once there, we inevitably hear the growls and yawns of bears (also scary) as they rumble around in the (hopefully) distance -- but it is called "bear" rocks afterall! The rocks and cliffs face east, and as the sun peaks over the horizon and spreads glorious color over the valley below, it's easy to lose yourself in the beauty of nature around you. 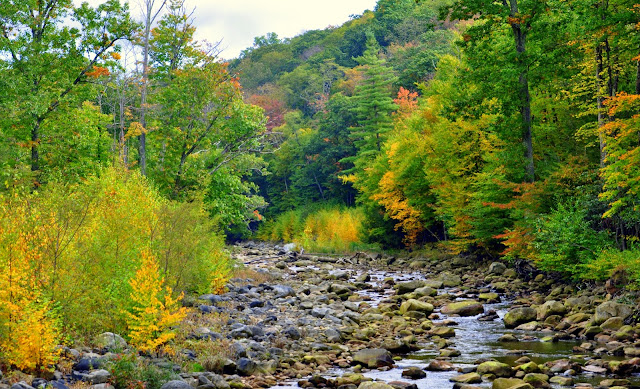 Tip #1: If you're heading up to Dolly Sods, make sure you do so on a full tank of gas. There are three gas stations along Rt 32 between Thomas and Davis. Take adequate clothes and it wouldn't hurt to throw in a blanket in case you find yourself having to shelter over night. It's on average 20 degrees cooler up in Canaan Valley, and probably a few more degrees colder still up in the Sods than in Washington and Baltimore. Bring some extra food and water -- just in case your vehicle breaks down. Four-wheel drives are recommended, but our minivan has made it up there multiple times -- just never in snow, and we try to avoid rainy days, since forest service roads are dirt roads. Cell phone coverage is spotty, so you can't count on calling for help. This is a wilderness, so prepare yourself before going in.

Tip #2: The Canaan Valley National Wildlife Refuge Visitor Center, located  on Rt 32 about 6 miles south of Davis, sells some excellent resources for the area, including hiking and terrain maps for Dolly Sods. You pass it on your way out of Davis toward Lanesville Road, so it's worth a quick stop if it's open.

Tip#3: The Leaf Peepers Festival is usually held the last weekend in September in Davis. Keep an eye on the Canaan Valley National Wildlife Refuge facebook site (https://www.facebook.com/canaanvalleynwr) for exact dates next year! 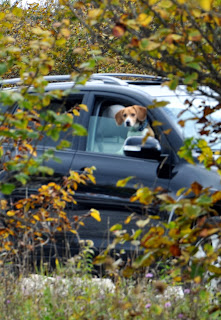 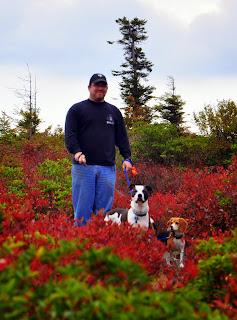 Hours: Dolly Sods-- or rather, the forest service roads accessing Dolly Sods -- is open April through November. If there's snow on the ground, don't even think about going up without a four-wheel drive. There's a camp ground up on top if you're the adventuring kind; no fees except for camping.

Getting there: Set your GPS for 2nd Ave in Davis, WV. Then, fill your tank with gas and head south on Rt 32/Appalachian Highway. After Canaan Valley State Park and Resort on your right, you'll head up a hill and then start down it again. On the left is Lanesville Road. Take that left, and follow Lanesville as it twists and winds through the mountainside. This is not driving for the faint of heart -- Lanesville Road is narrow and has some hairpin curves as it curves along the contour of the mountainside and the locals drive fast. As you look over the side, the flimsy guardrail is not reassuring. No worries -- if your vehicle tumbles over, chances are a couple of trees will stop it before it goes all the way down.

Lanesville Road will deposit you at the base of Dolly Sods at Forest Service Route 19. Follow FSR 19 up the mountain. About 3/4 of the way up on the right, opposite the Rohrbaugh Plains trail head, there's a picnic area and portapotties. This is the last opportunity to use the facilities with any semblance of dignity, so don't hesitate.

At the top of the mountain you have a choice: turn left onto FSR 75 or head back down the other side of the mountain. Turn left! That'll take you along a relatively flat road (some minor ups and downs) along the ridge. You'll pass some trail heads on either side. To the right fairly early on, there's a lovely overlook (short walk out to the rocks). Definitely worth seeing -- and as the sign indicates, take your camera!

Dogs: Dogs don't do well on Bear Rocks themselves (lots of tricky crevices), but bring your dog and go hiking on one of the trails that start along FSR 75. So many good smells! Don't forget to take a bowl and some water for Fido.

Eats: Pack a picnic and some extra food. In Davis there are a couple of restaurants that are okay. No fast food, except for Subway tucked into a gas station along Rt 32. There's a Shop 'N Save grocery store and at one of the gas stations (the same one with the Subway) you can also buy some groceries, very expensively. In Thomas, the town just before Davis on Rt 219, there is a rather famous little restaurant called the Purple Fiddle. Check it out!