Harpers Ferry: Stepping Back in History 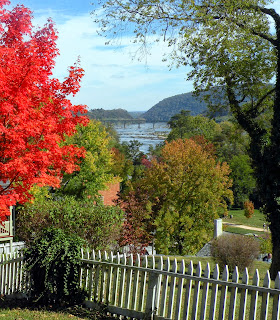 My husband and I probably spend a day or an afternoon at Harpers Ferry at least once a year, generally just walking around and then we'll have lunch. Sometimes, such as on this most recent visit, we'll bring a beagle or two. I've also taken my sons there multiple times -- sometimes focusing more on the history than at other times, or sometimes just dropping in for lunch and a relaxed walk along the canal on the other side of the railroad bridge.

So when the weather turned cooler in mid-September, it seemed like a good pick for a destination--especially since we didn't have all day, having to take some time out to move some furniture from my parents' home to my sister's. 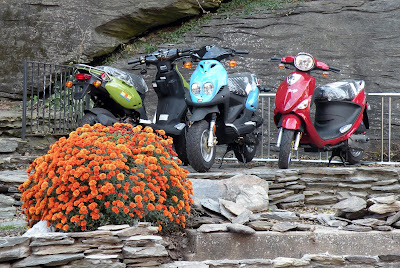 Checking out historic little towns is a favorite of ours -- browsing the shops and exploring the old tow America aspect of it. An ice cream parlor or two and a diner or quaint cafe helps. Having some national history attached to it is icing on the cake. Harpers Ferry is quaint, historic, and has both ice cream parlors and some tasty cafes to check out, along with some art boutiques, an historic candy shop, and a variety of touristy Civil War flavored type places. A bit of a surprise was the Steam Punk shop hidden in an alley! Also a pleasant surprise: several of the boutiques allowed us to bring our dog inside. 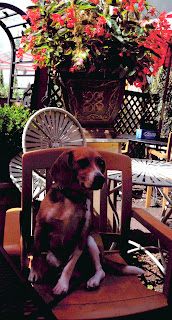 Since it was close to lunch time, we decided to start with lunch outside -- the weather was a cool 70 degrees and perfect and there are several restaurants with outdoor seating that welcome dogs in the outside spaces. At Coach House Grille, the waitress was kind enough to bring us a bowl of water for the beagle. We started with a baked brie with honey and almonds, served with pita bread, but then went for standard burgers. He had the black and bleu burger while I tried the Reuben burger. Both were delicious, although I was disappointed with the fries, and ended up giving them to the beagle. Notably, the beagle seemed quite pleased with the fries.

The lower part of Harpers Ferry is located within the Harpers Ferry National Historical Park. Although on this visit we decided to forego the historical aspect of the town, it's well worth spending a few hours learning about John Brown and how he and his abolitionist group took over the national armory in the town (for which he was hanged afterward) in 1859; that event is what the town is most well known for. 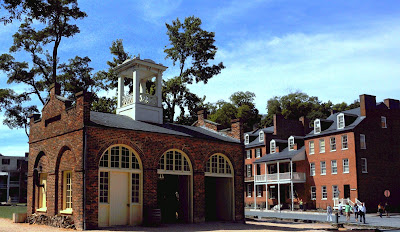 Brown had hoped he would be able to arm slaves and lead them against U.S. forces in a rebellion to overthrow slavery. After his capture in the armory (ironically by then U.S. Army Colonel Robert E Lee), Brown was hanged in nearby Charles Town. Brown's last words predicted the outbreak of the civil war. The most important building remaining from John Brown's raid is the firehouse (pictured here).

Harpers Ferry's importance to national history didn't end there -- so you should also spend some time learning about the part that Harpers Ferry played throughout the Civil War, having changed hands eight times throughout the conflict, including just before the Battle of Antietam in September 1862. Clearly, Harpers Ferry was NOT the place to be during the Civil War, although just as clearly, its factories and mills, and access to two rivers, railroads and an important canal made it a strategic location with much to offer whichever side controlled it. The visitors center offers a very nice presentation on Harpers Ferry explaining the history of the town and why it was so strategically important -- and why it was equally difficult to defend -- that's worth seeing.

This visit was just to enjoy a pleasant lunch, and stroll around town. We had planned to walk along the C&O Canal, on the opposite side of the river, until our beagle refused to go down the steps on the other side of the railroad pedestrian bridge, so that stretch of the C&O Canal will have to wait for a future blog! We could have carried him but we decided just to turn around instead. 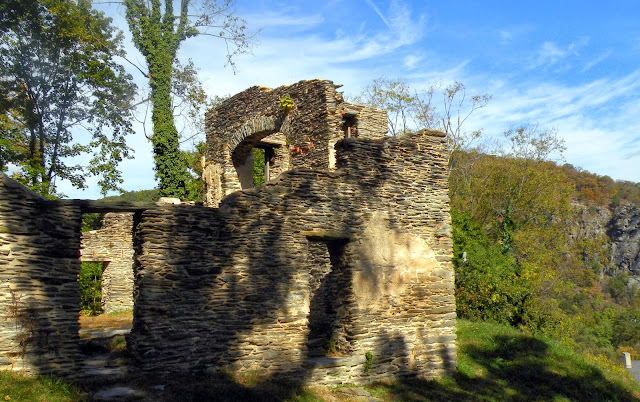 Back in town, we climbed the hill to catch the view of the rivers above the church. If we'd gone a little further, we could have checked out Jefferson Rock, at the top of the hill, overlooking the beautiful Shenandoah River before it joins the Potomac River a little bit further along. Jefferson Rock's claim to fame is that Thomas Jefferson stood on the rock in October 1783 and proclaimed that "the scene is worth a voyage across the Atlantic!" This is one of the places locally that you can hike, however briefly, on the Appalachian Trail. On your way up to Jefferson Rock, explore the ruins of the old church! 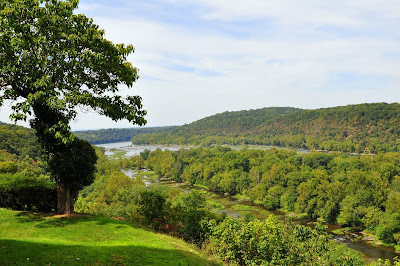 I've included photos from several of our visits to Harpers Ferry over the years -- it's really a spectacular place when the leaves are in full autumn color!

I recommend driving up Washington Street past the obviously touristy and old part of the town to where the current residents live (although some do live in the touristy part) to see the gorgeous Victorian era homes. And if you turn left down one of those side roads toward the old Hilltop Inn (now closed), you can see a gorgeous view of the Potomac River from the parking lot.

Tip: Parking is easiest at the National Park's visitor's center. If you're bringing a dog, you can't park there and take the shuttle in to town -- something I wish they'd change. So you have to go to one of the available parking lots close in to the town or get creative, or drop off 1 passenger and pooch and the driver take the shuttle in. Or park at the visitors center anyway and hoof it in, but it's a couple-mile walk. We got lucky this time: we arrived at 11:30 a.m. on a Sunday and were able to grab the last available spot in the Park's town parking lot. You still have to pay the $10 National Park entrance fee -- but to me, it's well worth it (both for the convenience and to support our national park system). 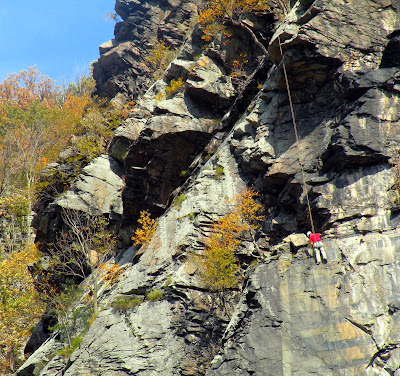 Dogs: Dogs are mostly welcome. Finding a place to park is the hardest part if you're bringing Fido.

Eats: Plenty to chose from in the Historic District. Many offer outdoor seating and welcome well-behaved dogs (and beagles, too).

Check out the blog's FB page for updates and current events for places we've visited and blogged about:  facebook.com/midatlanticdaytrips!

Have you daytripped somewhere interesting? I'd love to hear what you're doing! Email [email protected] if you're interested in being a guest-blogger!
Posted by Jody Arneson at 12:28 PM