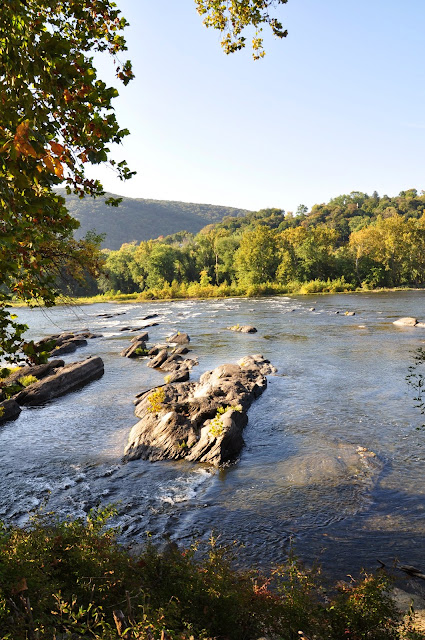 This is sort of part two of last week's Harpers Ferry blog--this is the stretch of the C&O Canal we were trying to reach via the railroad bridge when our beagle categorically refused to go down the stairs. (There is no joy in having to carry a 40lb beagle down and back up several flights of stairs!)

The recent Congressional debacle over the Federal government budget afforded me the opportunity to have some unexpected time off from my job, as I was furloughed with several hundred thousand other Federal workers. My husband and I took advantage of this by completing some "honey-do" projects around the house -- but we squeezed in some time for day trips as well!

Despite knowing that the National Park Service was closed, another victim of the government shutdown, I gambled on a trip to one of my favorite segments of the Chesapeake and Ohio Canal: the segment opposite Harpers Ferry, under Maryland Heights, between Lock 33, which you can access from the railroad bridge at Harpers Ferry, and Lock 34. 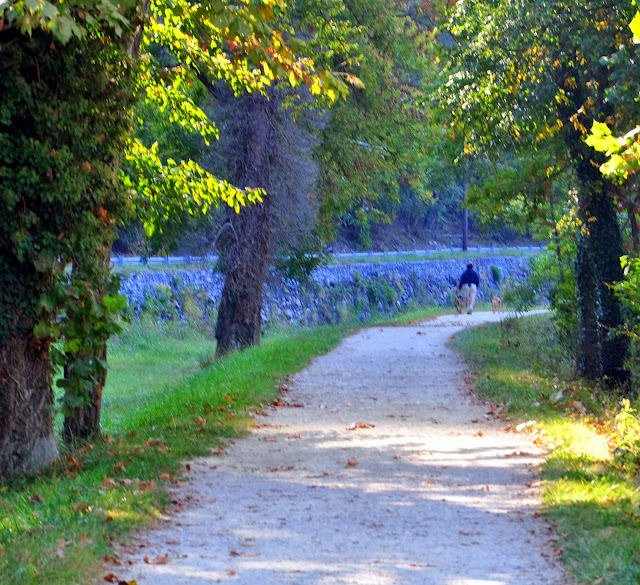 This segment runs close enough alongside the Potomac River to afford beautiful views of the river throughout the walk. Opposite the river, gorgeous homes dot the cliffside. On the other side of the canal and the narrow lane running alongside, rocky cliffs dominate the scenery. It's peaceful and gorgeous and not as well traveled as the segment at Great Falls in Montgomery County. Although the canal doesn't have any water in this segment, it is planted in grass and kept mowed, so you can appreciate the physical space of the canal, and the stonework that went into the locks and the walls. (Other segments are filled with swamp-like muck, or with out-of-control brush and trees that are quickly destroying all recognizable signs of the canal.) 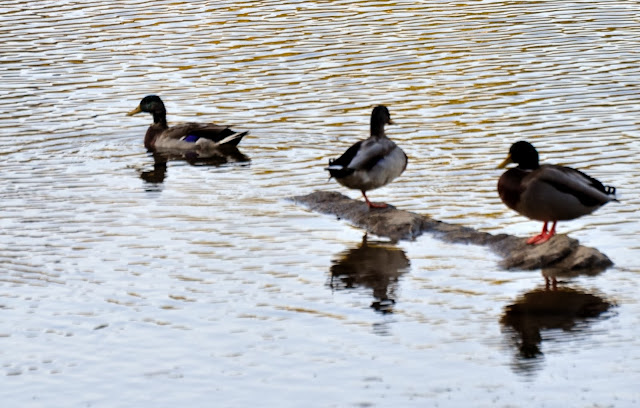 The C&O Canal operated from 1831 until 1924, and runs parallel to the Potomac River on the Maryland side, from Cumberland to Washington, D.C. The canal way is now maintained as a park, with a linear trail following the old towpath, the Chesapeake and Ohio Canal National Historical Park.
It is about 1 mile between the two locks. The path is smooth and appeals to bicyclists, so please share the path courteously. We started our walk near Lock 34. We encountered multiple joggers and walkers, including several with dogs, like us. We noticed a lot of birds along the river -- mostly mallard ducks, but quite a few cormorants and a couple great blue heron as well. We believe we may also have spotted a bald eagle, but didn't get a photo of it and aren't positive. Along the trail, squirrels frolic merrily, taunting all the dogs passing by. 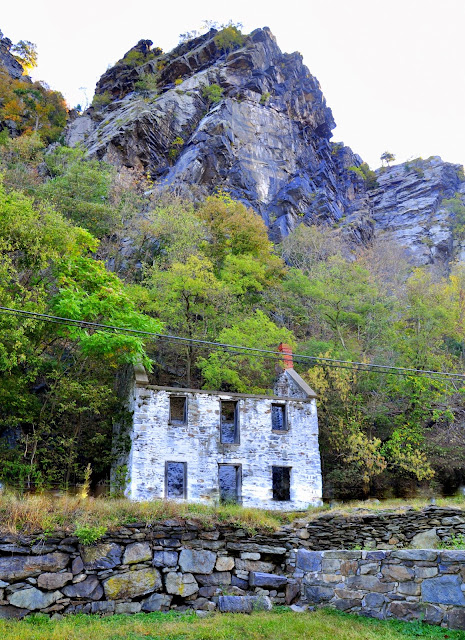 As we followed the towpath down toward lock 33, Harpers Ferry starts coming into view. First to come into view is the railroad bridge that allows access for foot traffic between the C&O Canal and the historic little town, but as you draw closer to Harpers Ferry, the buildings start peaking over the trees. On the left, opposite the canal is the former lock keepers house -- now just a empty shell huddled under the Maryland Heights cliffs.

For the more adventurous, the Maryland Heights Trail Head is right in this area -- and the view from the rocks is spectacular. I know this, because I remember from the time I climbed it about 20 years ago. I really should hike up there again!!

Tip: We accessed this segment along the appropriately named Harpers Ferry Road -- but I don't recommend parking there. Since it was a weekday and the towpath technically closed, we crossed our fingers, hoping that there would be empty parking spaces, and there was. But there are only 20 to 25 spots available, along a very narrow country lane. Best to park in Harpers Ferry and walk over the railroad bridge at lock 33 or park at the Harpers Ferry National Park visitor center and take the shuttle in, or plan on walking a bit further and parking at the parking area in Point of Rocks C&O Canal access point.

Getting there: Follow Rt 340W out from Frederick to Point of Rocks, if that's where you plan on parking. Or following 340 out across the bridge into Harpers Ferry via Shenandoah Street, or go on 340W further to the Visitor's Center at  171 Shoreline Drive, Harpers Ferry, WV 25425.

Dogs: Bring your pooch!! (unless you're taking the shuttle from the National Park visitor's center -- in which case, refer to last week's blog on Harpers Ferry for doggy/visitor center work-arounds.). The C&O Canal towpath was made for them! (Well, no, not really, but bring them anyway!) Also bring poop pick-up baggies. There are no garbage cans along the way, so bring an extra bag for carry out. Or bring your bicycles and kids, not necessarily in that order.