Recently, two friends and I headed over to Sugarloaf Mountain, to check out the park itself, visit the winery at its base, and then eat at a local restaurant. There were some surprises and yes, a disappointment. But more on that later.

Late fall is a fine time to check out the place that was President Franklin Roosevelt's first choice for a presidential retreat: Sugarloaf Mountain, in southern Frederick County in Maryland, right on the Montgomery County/Frederick County line. 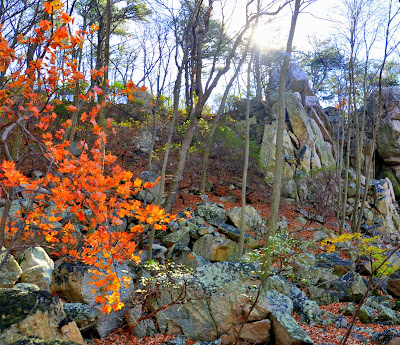 Unfortunately for Roosevelt, and subsequent Presidents, the owner, Gordon Strong, refused to sell the land. Instead, Strong deliberately and systematically bought up all the surrounding tracts of land he could get his hands on -- and then placed it into a private trust so that Sugarloaf Mountain's beauty can be experienced by everyone. Today it is one of the rare private parks that is completely open to the public, at no charge.

Sugarloaf Mountain is an example of a monadnock -- an isolated hill or small mountain rising abruptly from gently sloping or level surrounding land. It appears to be either an outlier to the east of the main mass of Catoctin Mountain. Early pioneers of the area named the mountain Sugarloaf because the rock formations reminded them of the loaves of sugar, which were common in those days. The mountain has watched American history unfold: General Braddock, commander of British troops during the French and Indian War, marched his men past the mountain in 1744. Several battles occurred nearby, and Union troops alternated with Southern troops posted lookouts at its summit during the Civil War. And in a log cabin that still stands at the base of the mountain, wounded and dying soldiers were hospitalized -- that was our surprise find.

The log cabin is not marked in any way -- I initially stopped because it was picturesque and I wanted to snap a few shots of it. It was only after we returned home and I began doing some research that I learned of its significance! 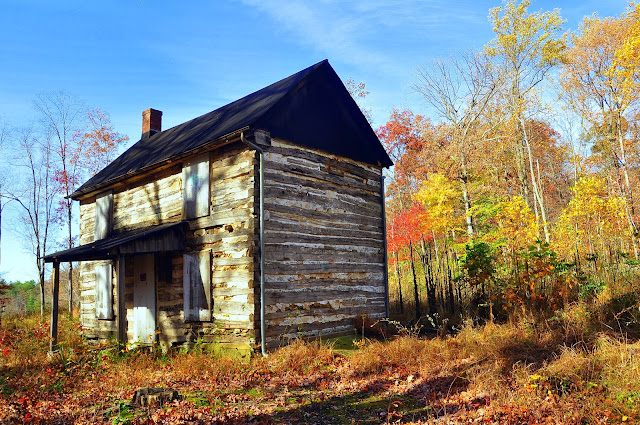 The park offers hiking, picnicking, and a scenic drive around the mountain past views of the Monacacy Valley and the Potomac River. Our goal this November day was to take the short quarter-mile hike from one of the scenic overviews up to the summit of the mountain. We chose the green trail, for no reason other than that we hoped it would be less steep. Hind sight being 20/20, we believe the red trail might offer a more gradual ascent. Hiking up the mountain, even that short distance (quarter mile), can be strenuous. There are several benches placed so hikers could rest; the green trail becomes very steep very quickly, and indeed, there are several flights of steps leading up the final ascent along an imposing rock cliff. 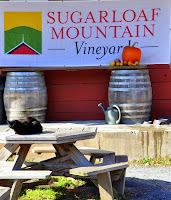 Afterward we stopped at Sugarloaf Mountain Vineyard, at the base of the mountain to sample an array of eight of their wines, including Stomp, Circe, Comus, and their Rose (my favorite of the group). Sugarloaf Mountain Vineyard grows five Bordeaux red grapes (Cabernet Franc, Cabernet Sauvignon, Merlot, Malbec and Petit Verdot) and three white grapes (Chardonnay, Pinot Grigio and Viognier). As you walk into the tasting room, you are greeted warmly and then directed over to one of the tasting stations (I felt like a cow in an efficient milking barn).

Once we were in place, the server quickly collected our $10 and efficiently opened up a bag of oyster crackers into a little bowl and the pouring began -- there is a factory-like assembly line atmosphere about serving the wine samples that distracts from the experience. The server rattled off little blurbs about the wines -- all of which I forgot almost as soon as I heard them -- holding the bottles and pointing to aspects on the labels in a carefully scripted monologue. We were in and out of there in under 10 minutes.

This was the disappointment of the day, as I'd heard good things about the winery, and it seems to be very popular. I wonder how much of its popularity is due to its proximity to DC and the very densely populated Montgomery County?

What I like about this winery: dogs are welcome on the grounds -- nice! Not many wineries welcome your pets, so Sugarloaf Mountain Vineyard gains points there! There are picnic tables on the patio and water bowls set out for your pooches. What I didn't like: you can bring a picnic, but if you want to eat inside, then you have to buy their food. That, combined with the mechanical efficiency of the tasting room makes this one of the few wineries I'm not interested in returning to.

Our last stop was a late lunch at Comus Inn, located on the corner of Comus Road and Old Hundred Road. The restaurant is located in an historic building and farm originally known as the Johnson-Wolfe Farm. The building has been added on over the years from the original two-story log cabin built in 1862 by Robert Johnson. The log core currently is exposed on the inside of the restaurant.

The crossroads of Comus was the site of a rearguard action during the Antietam Campaign of Civil War on the 9th and 10th of September 1862. The Comus Inn property at the old crossroads was the site of Union artillery batteries, as well as a gathering point for Federal forces seeking to capture the Confederate signal station. 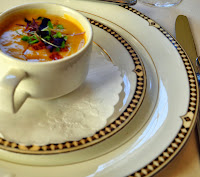 The lunch menu offers a variety of dishes, including crab cakes, a burger, and a catfish dish that was tempting until I heard the special: the Cuban sandwich -- pulled pork and ham with melted (probably provalone) cheese and seasonings. We also tried the soup du jour -- a roasted butternut squash soup with a hint of bacon. Interestingly, the only local wines offered on the drinks menu of the Comus Inn were wines from Elk Run Vineyards, not the restaurant's next door neighbor: Sugarloaf Mountain Vineyard.


If you're there during harvest season, then definitely take a few minutes to check out the Comus Market, right across the street from the restaurant.

Tip: If you avoid purchasing wine and pack your own picnic (and don't eat at the Comus Inn), this is a budget-friendly day trip!

Dogs: Definitely!! Except for Comus Inn.

Check out the blog's FB page for updates and current events for places we've visited and blogged about:  facebook.com/midatlanticdaytrips!

Have you daytripped somewhere interesting? I'd love to hear what you're doing! Email [email protected] if you're interested in being a guest-blogger!
Posted by Jody Arneson at 3:51 PM