Visiting the Ponies at Assateague Island

Visiting Assateague Island isn't just a summer day (or weekend) trip -- the island offers a lot of interest for all seasons. When the ocean-dipping crowds depart, the island really comes alive for me. Cooler weather means pleasant walks along the island trails, and of course, no bugs!

Of course, it is best known for its herds of feral horses* and pristine beaches. The island also offers numerous marshes, bays, and coves. Several different companies offer boat tours and guided kayaking trips to see the horses and other island wildlife (that's on my wish list of daytrips!). The island also offers a taste of the natural seashore that is almost nowhere to be found now. If you need the boardwalk, the arcades, and the pizza joints, then head a few miles north to Ocean City, where all that kitschy beach-town glitz can be enjoyed.

*Because I am NOT horse-knowledgeable, I am using the terms horse and pony interchangably, primarily because it sounds cute to call them ponies. I am aware there is a difference in terms of size and definition between horse and pony. There is a controversy between Maryland and Virginia -- the equines in Maryland are referred to as horses, whereas the ones on the Virginia side of the state line are referred to as ponies, despite the fact there is no discernible difference between the herds.

For me as well, Assateague is a place of memories -- my family went camping there in the 1970s, until a storm almost blew our camper over. (Sunburned and tired, the next day we packed up and headed to the mountains, never to return -- at least, as a family unit.) But despite that, I have many fond memories in Assateague as a child, including the thrill of seeing the wild ponies and splashing in the ocean. Like many little girls, I grew up reading Marguerite Henry's series of children's books about the wild horses, beginning with her most famous, Misty of Chincoteague. 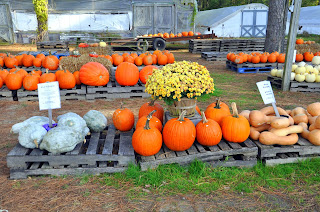 With some time on our hands one recent fall Saturday, we decided to head down to Assateague Island, check out the ponies, have lunch at Berlin near by, stop at one of the farm stands along the way to pick up some apples, and check out any interesting stores we happened to notice as we passed by. We packed up the dogs, grabbed some extra water and a dog bowl, and hit the road.

We soon passed several roadside farm produce stands, and stopped to purchase a variety of apples, some vegetables, and winter squash. After a quick walk for the dogs, we were off again, next stop: Assateague Island. 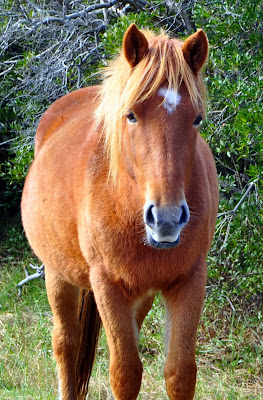 Once over the bridge that connects the island to the mainland on the Maryland end of the island, we were immediately greeted by a welcoming committee of wild ponies. It is not known exactly how these horses came to the island. Local folklore describes the Assateague horses as survivors of a shipwreck off the Virginia coast. While this dramatic and romantic tale of struggle and survival is popular, there are no records yet that confirm it. The most plausible explanation is that they are the descendants of horses that were brought to barrier islands like Assateague in the late 17th century by mainland owners to avoid fencing laws and taxation of livestock.

The ponies struggle to survive on the island. The summer brings mosquitos, horse flies, and scorching heat; the winter brings frigid, unrelenting winds and storms. These are tough little ponies!

Cute as they are -- these horses are WILD; they don’t behave like domestic horses and can’t be treated like the trained, domesticated horses we see in farm pastures, so be cautious, and follow the guidelines provided by the National Park Service:
Before the national seashore was created in 1965, the island was going to be turned into a private resort community called Ocean Beach, Maryland. Some 5,000 private lots comprising what is now National Park Service property were zoned and sold for resort development in the 1950s. However, the Ash Wednesday Storm of 1962 halted the plans for development. The Nor'easter destroyed the few existing structures on the island that had been built and ripped the roads apart. Realizing that the island was too unstable to build upon, the housing development firm sold all of its land to the federal government. 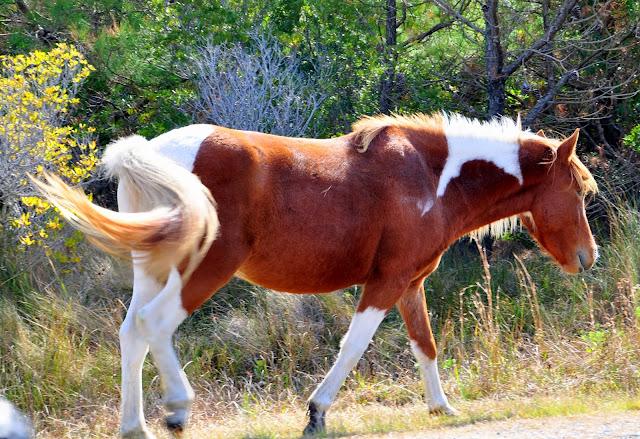 To this day, it is not possible to drive the entire length of the island; one must travel on the mainland to journey between the National Seashore in Maryland and the National Refuge in Virginia. 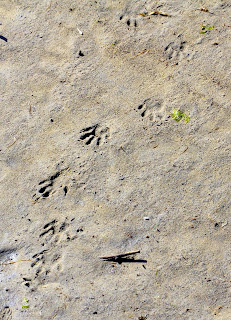 Many other creatures also call this home -- so keep your eyes peeled as you walk the trails and explore the island -- you'll be sure to see evidence! Assateague Island is a priceless seashore ecosystem that deserves our interest and protection.

If you go for just the day, then consider also stopping at nearby Berlin. Less than 8 miles away, this historic town offers quaint shops and small restaurants give visitors the chance to step back in time. Berlin also was the filming location for two major motion pictures, "Runaway Bride" and "Tuck Everlasting."

Tip: If you go between Memorial Day and Labor Day -- beware: dogs not welcomed in the day use areas, so leave your pooches at home!

Dogs: Definitely!! Except for the summer months.