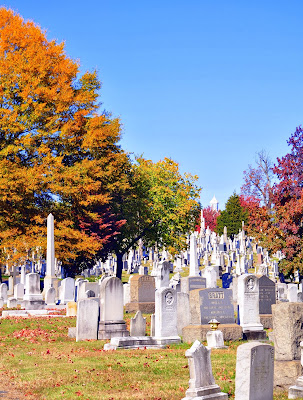 So much of our lives is dictated by chance. By chance, my mother suggested I take the ghost tour through Mount Olivet Cemetery, in Frederick, last summer. By chance, my husband couldn't come, so I invited my friend Barb, a.k.a., Day Trip Pal, instead. Now the two of us have taken up "cemetery photography" -- not in the ghost hunting way, but in the "oh my, that's a pretty statue" way. We've become tombstone tourists. (Although if I ever do see a ghost in a photograph, you can be sure I'll blog about it!)

By chance, I happened to hear something about Loudon Park Cemetery, in Baltimore. So one Sunday morning -- a brilliant autumn day in early November -- when I happened to have nothing better to do, I called Day Trip Pal and suggested we grab our cameras and check out this historic cemetery. 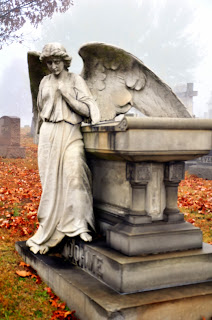 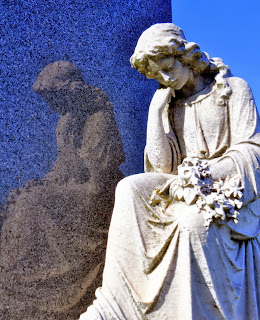 Once we got there and started exploring, we realized we would be going back, several times, and we have, including on a foggy morning that was eerie and quiet and last weekend, in the snow, to photograph the sunrise. It's huge -- 350 acres -- and evidently is where many of Baltimore's rich and famous are buried. There was too much to absorb in one visit -- so many intriguing grave markers and statues to photograph. And that was before we even drove into the older, and really interesting section.

Visiting historic cemeteries isn't for everyone*, but it's not as morbid as one might immediately assume. Cemeteries are surprisingly alive and busy -- at any given time, you'll encounter several joggers or cyclists taking advantage of the well-maintained and peaceful drives. In the newer section, you may encounter funerals (please be respectful). Birds and small wildlife abound in cemeteries. And the historic ones are really quite scenic -- in keeping with the Victorian era's attitude that cemeteries were meant to be -- and were used as -- beautiful parks in which it was quite normal to stroll about and picnic in.

(*Dr Who fans will be weirded out by all the angels!) 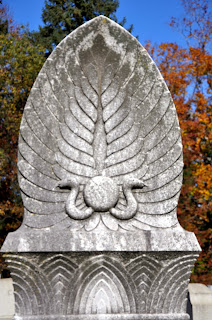 Since the ghost walk through Mount Olivet Cemetery (for more about that, go to http://www.midatlanticdaytrips.blogspot.com/2013/09/mount-olivet-cemetery-more-history-than.html), Day Trip Pal and I have now visited nine different cemeteries between us. This has prompted us to start learning some of the iconography and meanings of what we're seeing on the gravestones and statuary. Now, in addition to cool places like Eastern State Penitentiary and Fort Delaware, I've suddenly added historic cemeteries in Philadelphia, New York City, and Boston to my list of places I hope to visit. 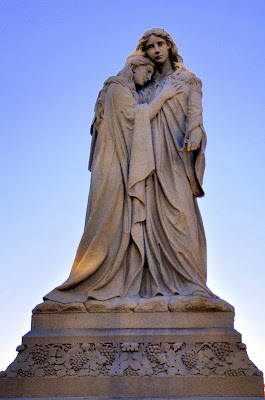 Loudon Park is an old and historic cemetery -- established in 1853 on the grounds of the former Loudon estate. A corner of the cemetery is the Loudon Park National Cemetery, where 2300 Union soldiers are buried. Some distance away, not in the National Cemetery portion, lay about 650 Confederate soldiers, readily identified by the identical stones and the statue of a Confederate soldier.

Loudon Park was designed in the tradition of the Victorian-era "park cemeteries," as a place for families to go stroll about for an afternoon, enjoying nature and the outdoors. They seemed so much more comfortable with death than we do in modern times, I think. As tombstone tourists, Day Trip Pal and I are carrying on that Victorian tradition.

I feel as if we've made a complete circle -- we started our cemetery visits with Mount Olivet Cemetery, where Frances Scott Key, author of the "Star Spangled Banner," is buried with his wife. Now we're here where Mary Pickersgill, seamstress of the flag that flew over Fort McHenry during its bombardment by the British in 1814, is interred. This famous flag inspired Francis Scott Key to write “The Star-Spangled Banner.” (When the main exhibit opens up again next month, the blog will be visiting Fort McHenry and the Star Spangled Banner House.) 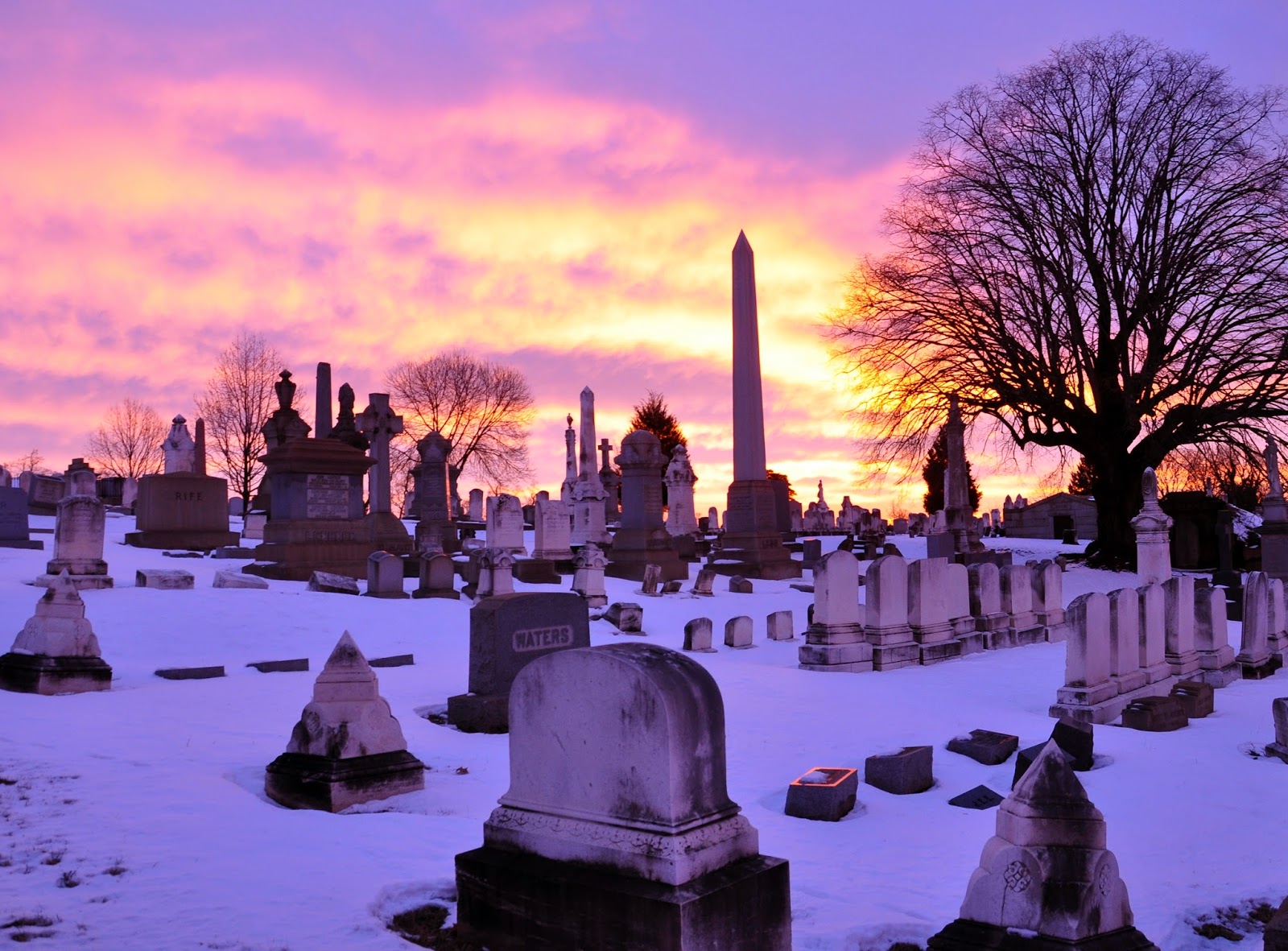 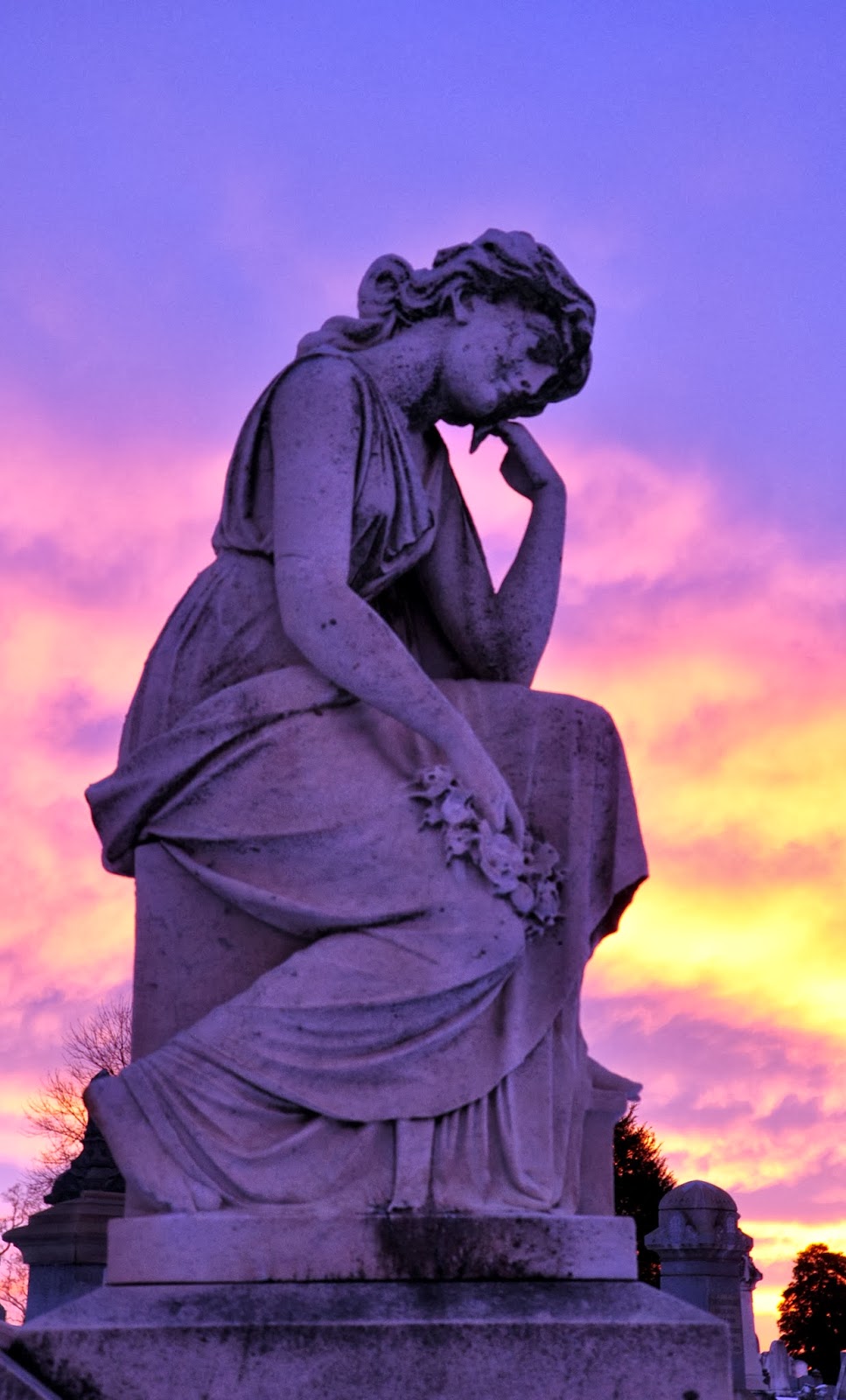 Also of note at Loudon Park is the Weiskittel mausoleum—
constructed of cast iron and painted silver—which is listed on the National Register of Historic Places. The mausoleum is the final resting place of the Weiskittel family, who were manufacturers of cast-iron stoves.

While we were there in November, we met a cyclist who rides the 15- miles of cemetery lanes regularly for exercise (and given how hilly it is, it is, indeed, exercise!). He noted that he often rides through the cemetery at night. "It's spooky, but that's because it's a cemetery," he said, "I've never seen anything -- it's not haunted," except by local area kids who come in to vandalize the headstones and topple them over. He noted that he often encounters local police, who drive through the cemetery regularly. 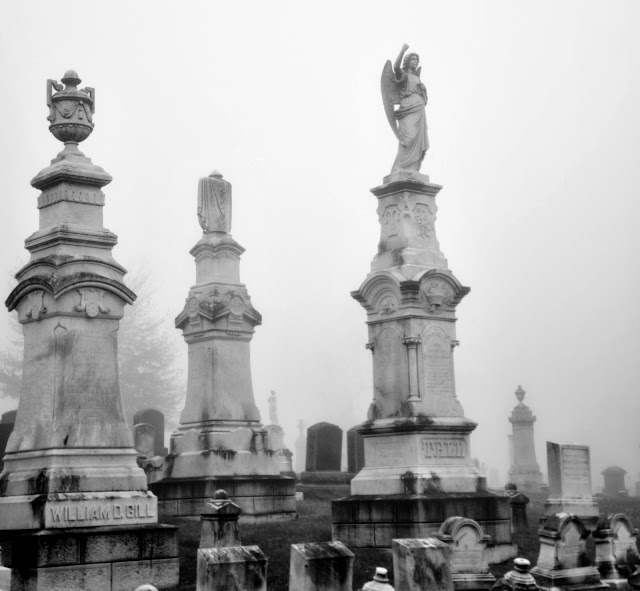 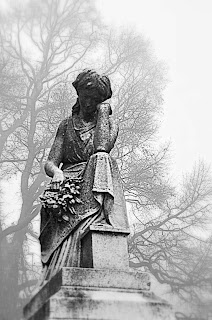 A friend of mine, upon learning of our visit to Loudon Park, disputes the cyclist's assurances that the cemetery isn't haunted. James said his grandparents lived for many years in a row house near the cemetery on Walrad Street and that most of his family had had "experiences" there.

Apparently most of the area hauntings occur not in the cemetery -- so perhaps the cyclist was correct -- but in the homes nearby. James' father told him that many of the houses there had instances of things happening. In fact, pretty much everyone in James' family had an experience in his grandparents old house. He and his brothers would visit his grandparents weekly, often spending a night with them.

He recounted seeing a ghost in middle of the night hovering over a chair in the living room. He and one of his brothers could not sleep one night and thought they heard the TV on downstairs, so they went down and the room was dark except a little bit of light from a street light outside. Hovering over a rocker type chair was a misty greyish white ball (no real form to it), but the chair was rocking back and forth.

His "favorite" ghost, and this one was witnessed multiple times, was a ghost that would come out of his grandparents bedroom closet, go out the door and walk down the hallway. There was only one bathroom in the house and it was upstairs at the end of the hallway. "I was always petrified to go up there by myself. Seriously, I always had the feeling that something was watching me!" he said.

Getting there: The National Cemetery is accessed off of Frederick Avenue. To get into the other part of the cemetery, go to 3620 Wilkens Ave, Baltimore, MD 21229.

Hours: Daylight, although it's open all the time. Still, I prefer daylight, for obvious reasons.

Dogs: Not really appropriate, but if you do bring Fido, bring along baggies to clean up after him. There are several waste baskets located throughout the cemetery for doggie bags.