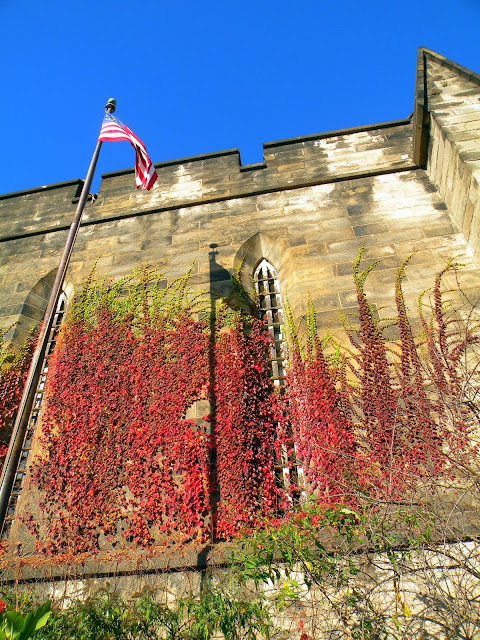 How do you describe a place that is intentionally ugly, intentionally horrible, intentionally built that way? How do I describe a place that having visited a couple of years ago, still haunts me? The Eastern State Penitentiary Museum and Historic Site initially captured my interest in the early 1990s, when I worked at the American Correctional Association (ACA). Despite living just 2 hours away, I ended up waiting almost 15 years to visit Eastern State, which is located in Philadelphia. 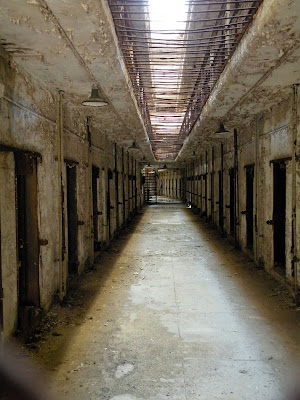 I know that prisons aren't supposed to be pleasant places. But rarely are we confronted with places like Eastern State Penitentiary. (I'd like to note that this was not the first prison I've entered. As a writer/editor for Corrections Today, I'd traveled to several jails and maximum security facilities, including the now notorious Baltimore City Jail and the Women's Correctional Facility in Jessup, MD.)

Opened on October 25, 1829, Eastern State is the world's first true penitentiary. At its completion, the building was the largest and most expensive public structure ever erected, and became a model for more than 300 prisons worldwide. Operational until 1971, Eastern State's revolutionary system of incarceration encouraged separate confinement (the warden was legally required to visit every inmate every day, and the overseers were mandated to see each inmate three times a day) as a form of rehabilitation.

Notorious criminals such as bank robber Willie Sutton and Al Capone were held inside its innovative wagon wheel design, and Al Capone's luxuriously furnished cell has been recreated and is on display, complete with oriental rugs, lamps, and elegant furniture. Ordinary inmates at the time were two to a cell, plain beds and only the most minimal furniture.

It is a severe place. Bare stones. Crumbling concrete. Peeling paint. Abandoned cell blocks give no clue to the lives of the men who did their time there. The Penitentiary was intended not simply to punish, but to move the criminal toward spiritual reflection and change.We wondered whether the initial concept of isolation-induced contemplation yielded the reformative results originally intended? Unfortunately, recidivism statistics were not kept at the time. By 1913, Eastern State officially abandoned the one man, one cell system and operated as a congregate prison until it closed. When it closed, Eastern State was overcrowded, as were most American correctional facilities by the early 1970s. 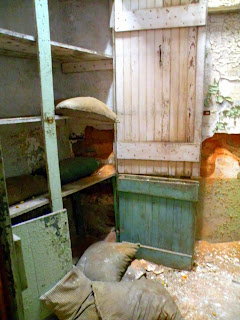 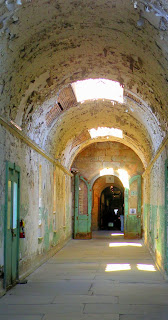 Originally, inmates were housed in cells that could only be
accessed by entering through a small exercise yard attached to the back of the prison; only a small portal, just large enough to pass meals, opened onto the cell blocks. This design proved impractical, and in the middle of construction, cells were constructed that allowed prisoners to enter and leave the cell blocks through metal doors that were covered by a heavy wooden door to filter out noise. The halls were designed to have the feel of a church.


Outside the cell was an individual area for exercise, enclosed by high walls so prisoners could not communicate. Exercise time for each prisoner was synchronized so no two prisoners next to each other would be out at the same time. Prisoners were allowed to garden and even keep pets in their exercise yards. 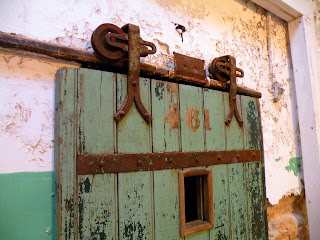 Cell accommodations were advanced for their time, including a faucet with running water over a flush toilet, as well as curved pipes along part of one wall which served as central heating during the winter months where hot water would be run through the pipes to keep the cells reasonably heated.

The original design of the building was for seven one-story cell blocks, but by the time cell block three was completed, the prison was already over capacity. All subsequent cell blocks had two floors. 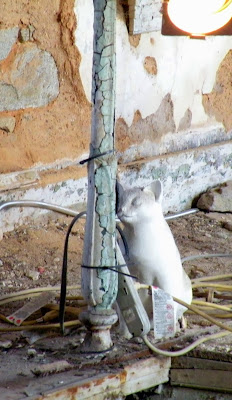 During the abandoned era (from 1971 until the late 80s) a "forest" grew in the cell blocks and outside within the walls. The prison also became home to many stray cats, which are remembered by an art installation that was there at the time we visited: whimsical white statues of "ghost cats" placed throughout the prison grounds. There also are art installations in several of the cells and throughout the buildings.

The modern-day museum is in the process of halting the deterioration of the penitentiary in many places, and restoring it in a few other places so we can better understand the evolution of this country's correctional system.

Visiting Eastern State sparked an interesting conversation on the way home about how we should punish those who break the law, which evolved into a discussion on basic human rights. That conversation is exactly why I dragged my kids to this place! It's been a few years -- and yet, it haunts me, and not just because it's been showcased on several different ghost hunter "reality" shows. I think it's time to go back!

Several ghost tours are offered, and at Halloween there's an extensive "haunted house." These sound fun, and are on my list, but I definitely recommend going for the history and to experience the place itself.

Tip: If you're looking for something to do on a winter's day -- head to Eastern State. Dress warmly as it's not heated. But it's not air conditioned either, so I'd recommend this as a winter day trip.

Getting there: GPS it: 2027 Fairmount Ave, Philadelphia, PA 19130. There is only street parking at the location, so you will have to either find a spot on the street or use the public parking lot next door to the penitentiary. Parking was easy to find mid-morning on a Saturday. 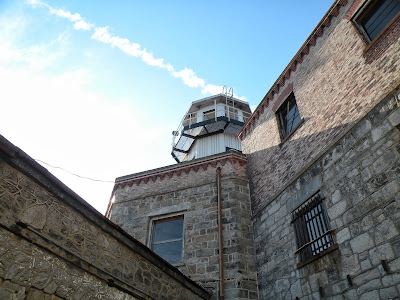 Dogs: Although Pep, a black lab, was given a life sentence in Eastern State in 1924, your dog isn't welcomed.

Eats: Once you're outside the historic site, there are plenty of local restaurants and cafes to chose from.

Have you daytripped somewhere interesting? I'd love to hear what you're doing! Email [email protected] if you're interested in being a guest-blogger!
Posted by Jody Arneson at 2:58 PM