This week's blog will be different than other weeks. Last weekend I didn't do anything worth blogging about, unless you want to hear about replacing bathroom light fixtures (with some really cool 1970 retro lights) and re-organizing my closet...

No, didn't think so.

So over this week and the next, I'll post several blogs, starting with this one, about the Thousand Islands region. Be sure to check out Thursday's post -- a Valentine's Day special -- about a very special place one man created for his beloved wife. Next week we'll explore the sights of a twilight dinner cruise through the Thousand Islands and wrap up the series with a visit to Singer Castle.

Although our visits to see the lighthouses offered in this post weren't part of a day trip from our homebase in Maryland, it was a "daytrip" from our forward-deployed vacation position in Pulaski, NY, where we'd rented a lovely cottage on the shores of Lake Ontario for a week two summers ago. It was during this trip that I first conceived the idea of blogging about day trips. It took me a while to get started!

First off, I should state I don't go on vacation to relax. There are things to see, places to go, and go I do -- I like to see the area, if only driving around the roads (such as in Texas, where truly there didn't seem to be much to see, near Killeen/Fort Hood). Thus, it was with the greatest of sacrifices that I carved out time in a packed week-long schedule in upstate New York for the kids and I just to float and play in the Lake Ontario waters...

We went on several boat tours of the Thousand Islands. The St. Lawrence River is beautiful and clear, and Thousand Islands is definitely on my list of favorite places -- I'd like to go back and explore the area further. I'd love to rent Singer Castle for a night, or stay at one of the lighthouses that are available.

Since traveling to upstate New York, I've challenged myself to visit and photograph all the lighthouses in the United States. For the time being, I'm working on those light houses east of the Mississippi. It's a formidable goal -- I've got some 400 or 600 light houses to see. (Plenty of ammunition for many a blog posting.)

Why lighthouses? When lighthouses were used for safety, they alerted sailors that their ship was approaching shore or unseen hazards in the water. Even though lighthouses are no longer used for their original purposes (thanks to modern technology), the legacy of lighthouses makes them very popular, and they still serve as navigation aids.

Is it the mystery of the sea (or river, in this case) and a way of life long gone by? Or are they merely symbols of a "simpler" and thus perhaps safer time? (No, not really -- I think life is so much easier for us now than when there wasn't indoor plumbing and electric lights and stoves and ovens, dishwashers and clothes washers.) Lighthouses seem to attract, more than any other type of building, legends and ghost stories. I'll leave it to the anthropologists to explain why. I like their solitude and mystery.

On my "wish list" this year is a boat tour of the Chesapeake Bay that will take us to "a bunch" of lighthouses, and of course, that will appear in the blog. But meanwhile...
.
...come with me to visit the light houses in the Thousand Islands region. I think I missed a few... oh well, I guess I have to go back!

Sunken Rock Light is a lighthouse on Bush Island. In 1847, Congress appropriated $6,000 for three beacon lights in the Thousand Islands area of the St Lawrence River. One of these was designated to mark Sunken Rock, a dangerous submerged obstacle located near the eastern entrance to the narrows running between Wellesley Island and the mainland. The rock was built up to provide the foundation for a tower and boathouse. The islet is also known as Bush Island.


In 1882, a new iron tower was erected on a concrete base placed over the foundation of the first light. The new tower was lined with bricks up to the first landing, and wood above that. A new boathouse, measuring twenty-one feet by twelve feet, was built the next year to replace the old one, which was too decayed to repair. For the convenience of the keeper, part of the boathouse was partitioned off and fitted with a bunk to serve as a watchroom.  It was converted to solar power in 1988 and is maintained by the St. Lawrence Seaway Development Corporation.

Rock Island Light, opposite the mouth of Mullet Creek, was erected as one of the three beacons authorized in the St. Lawrence, by the act of March 3, 1853; the other two being Sunken Rock, near Alexandria Bay, and Cross-over Island, in Hammond. Since a beacon existed at Rock Island as early as 1847, the "authorization" of 1853 probably refers to approval for refitting the towers, which eventually happened in 1855.


In 1882, the combination keeper's dwelling and tower were replaced by separate structures. A conical iron tower was erected on a bedrock platform at the center of the island, having the foot of its base approximately 15 feet above mean river level. Similar towers were erected on Sunken Rock Island and Crossover Island, such that today both stand as examples of what Rock Island Light looked like during this period. A few yards away, a one-and-a-half story Victorian shingle-style dwelling was constructed, facing north, and surrounded by a concrete seawall for protection.

After the tower was erected at the center of the island the rate of shipwrecks in the vicinity actually increased, since the house, trees, and other lights from the mainland obscured pilots' perceptions of the beacon. In the fall 1894, the light tower was raised approximately five feet from its position in the center of the island, so it could be seen over the roof of the dwelling. It was set atop a solid octagonal wall of red granite laid in Portland cement mortar beneath.

It was finally thought best to move the light tower to an unobstructed location. At the turn of the century, construction began on a walkway, consisting of masonry rubble coated with concrete, that extended from the north face of the island into the river. At its end was added a partially submerged platform upon which a 15 foot wide conical brick base was built. In 1903, the old iron tower was then taken up from its place at the center of the island and placed atop the brick base, thus maintaining more or less the height of the previous light above water level. It is this "stacked" tower that exists today

The light once held a sixth-order fresnel lens, but following World War II, the station was deactivated and the old lens removed. At one time the lamps were powered by a gasoline generator. In 1988, the station was converted to use solar power. Today, the tower emits a white light, but is no longer officially used as a navigational aid.

Unfortunately, we visited the area in July 2012, and I say unfortunately because in June 2013, the island and all its buildings were reopened to the public as a park maintained by the New York State Office of Parks, Recreation & Historic Preservation. The island is accessible by private boat and local shuttle service, and the grounds are open for touring and picnicking. NYS Parks has partnered with Clayton Island Tours to offer a special "Rock Island Tour" with a one hour stopover at the Island. Contact Clayton Island Tours for tour times and fees at 315-686-4820 or on the web at www.ClaytonIslandTours.com. - See more at: http://nysparks.com/parks/188/hours-of-operation.aspx#sthash.L984orbV.dpuf

Tibbetts Point Lighthouse Hostel is located at the point where Lake Ontario and the St. Lawrence River
meet. After the lighthouse became fully automated in 1976, the Victorian-era lightkeeper's quarters was converted to a hostel. Explore the Lighthouse Museum next door. Built in 1827, the Lighthouse features the only original working Fresnel lens in Lake Ontario. Visitors will enjoy using the provided telescope to survey the Lake and River.

Capt. John Tibbetts of Troy, NY gave 3 of his 600 acres to the Federal Government to establish a lighthouse. In 1827 the first Tower and Keeper's Quarters were built. In 1854 the first tower was replaced by the present circular one. This also marked the installation of the Fresnel Lens -- which is still in operation. A fog whistle was added in 1896. It was replaced with an air-diaphone in 1927 operated by a diesel engine with automatically timed blasts. In 1939 the U.S. Coast Guard assumed lighthouse duties until 1981, when the light was automated and serviced out of Oswego, NY. Lighthouse quarters became a Youth Hostel in 1984. 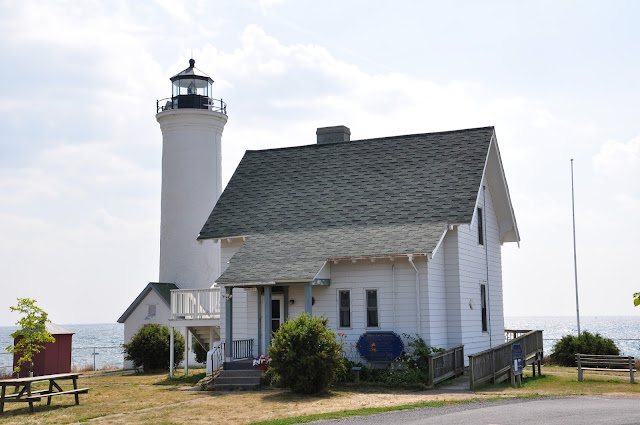 Although not on the St Lawrence River, we visited this light house, located near the cottage we rented in Pulaski. It's one of the more picturesque light houses that I've been to, and when I saw it, I thought that the light house should be haunted. As it turns out, according to web sites, local legend says it is indeed haunted, by not one, but two ghosts! Selkirk Lighthouse is located at mouth of the Salmon River and is one of only four lighthouses in the United States that retains its original bird-cage lantern. Completed and activated in August 1838, it is one of three lighthouses in the North East that visitors can rent for overnight stays.


The original light was a 14" diameter parabolic

faced the lake and two were positioned on each side. This apparatus initially burned whale oil from a 24-hour reservoir

and used a secondary frost lamp in particularly cold weather to warm the main lamp. 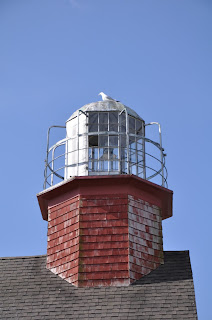 Operating seasonally during the shipping season, the lighthouse keepers were paid $350 per year for 8-9 months of duty, then returned to their normal homes in Pulaski or Richland for the winter. The lighthouse was officially de-activated in 1858,

at the beginning of the annual navigation season on April 1, 1877.

November 1976, and elected to the National Register of Historic Places in March 1979.

bulb-changer and are back on the NOAA charts as a Class II navigation aid.