There once lived a man who, in the early part of the 20th century, built two castles. He was a visionary, for he recognized the importance of preserving items of a fading way of life for future generations. He was a artist, creating tiles that were reknown for their beauty. And he was a bit of an odd duck, because he created medieval castles out of a modern building material, and then let his imagination and whimsy loose on the interiors. 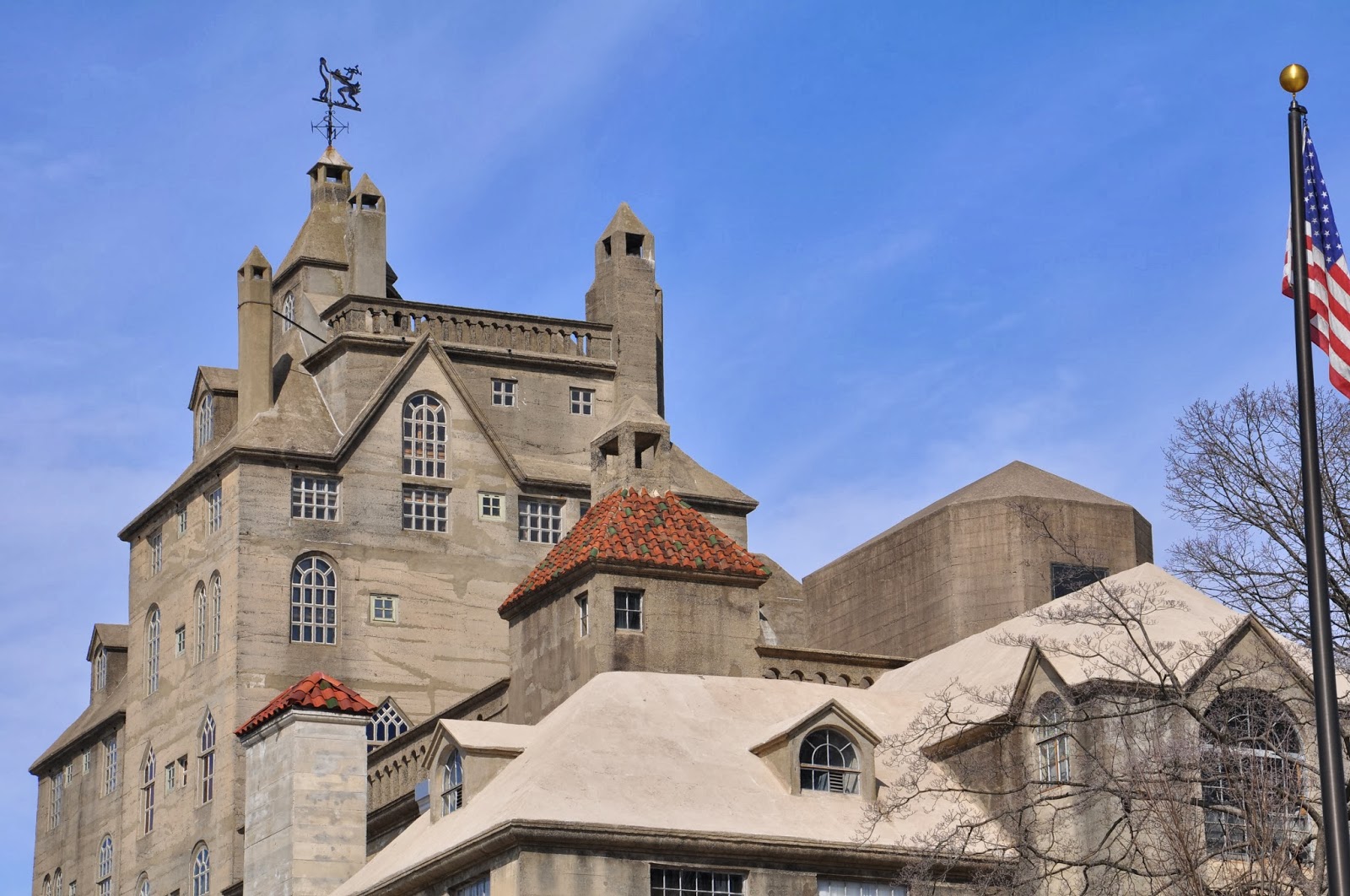 Last weekend, we traveled to Doylestown, PA -- about 45 minutes north of Philadelphia, and a good 2 1/4 hour drive for us, since we live near Baltimore -- to visit the two castles Henry C. Mercer built in the early 1900s. Mercer, who was born in 1856, was a noted tile-maker, archaeologist, antiquarian, artist, and writer.

When he was 13, he accompanied his aunt, who was quite wealthy, his mother, and siblings on a tour of Europe that was to have a lasting impact on him -- it was during this trip that he saw and sketched several castles, which influenced the design of the two concrete castles he built. 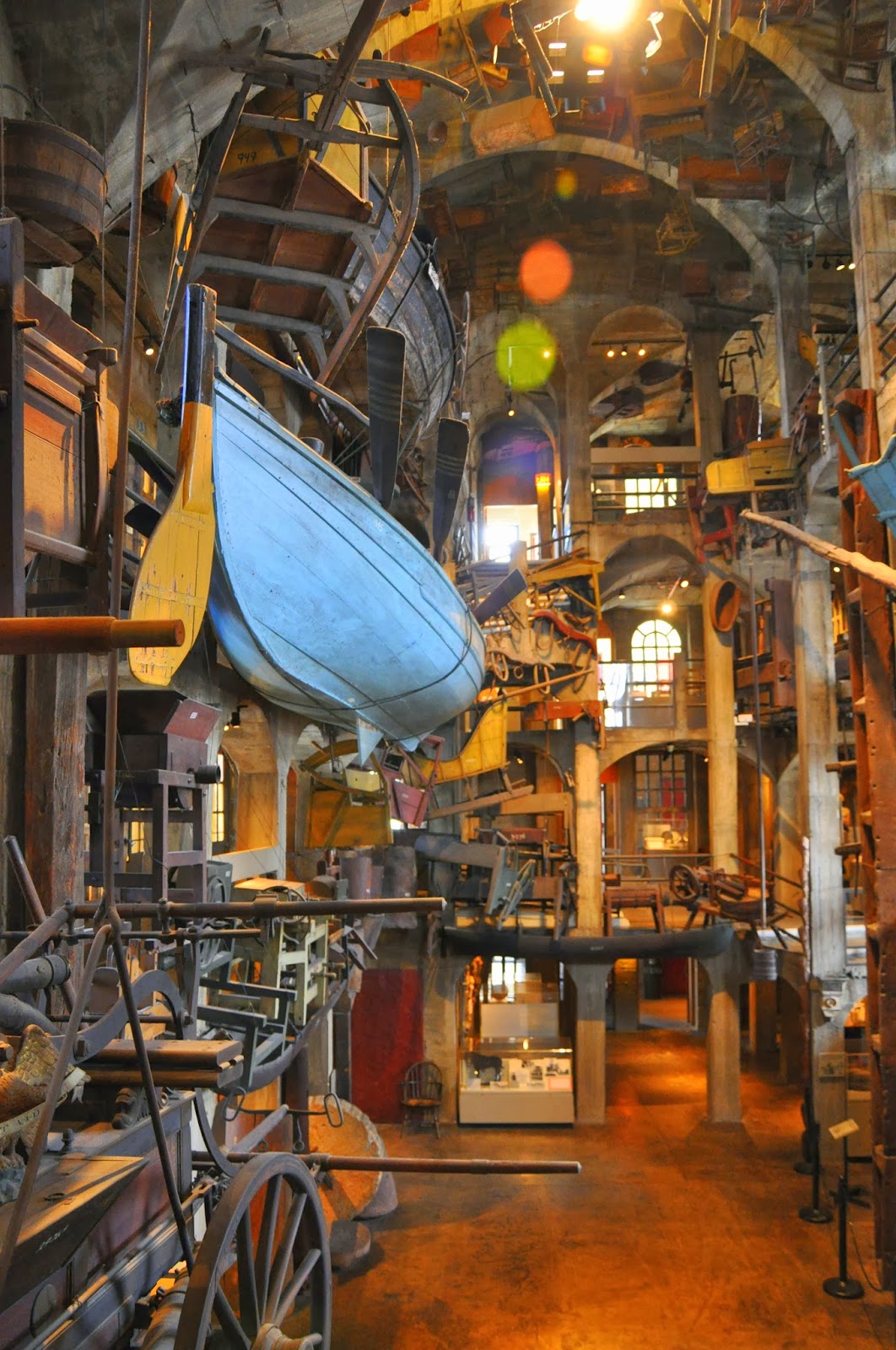 By 1897, handmade objects were being discarded in favor of new machine-made goods. As an historian and an archaeologist, he sought to collect and preserve the outmoded material of daily life in America, before it was swept away by the Industrial Revolution. His aunt left her favorite nephew her fortune, allowing him to start going to country sales and purchasing all the items in "penny lots." He built the museum castle in 1916 to provide a home for all these artifacts. 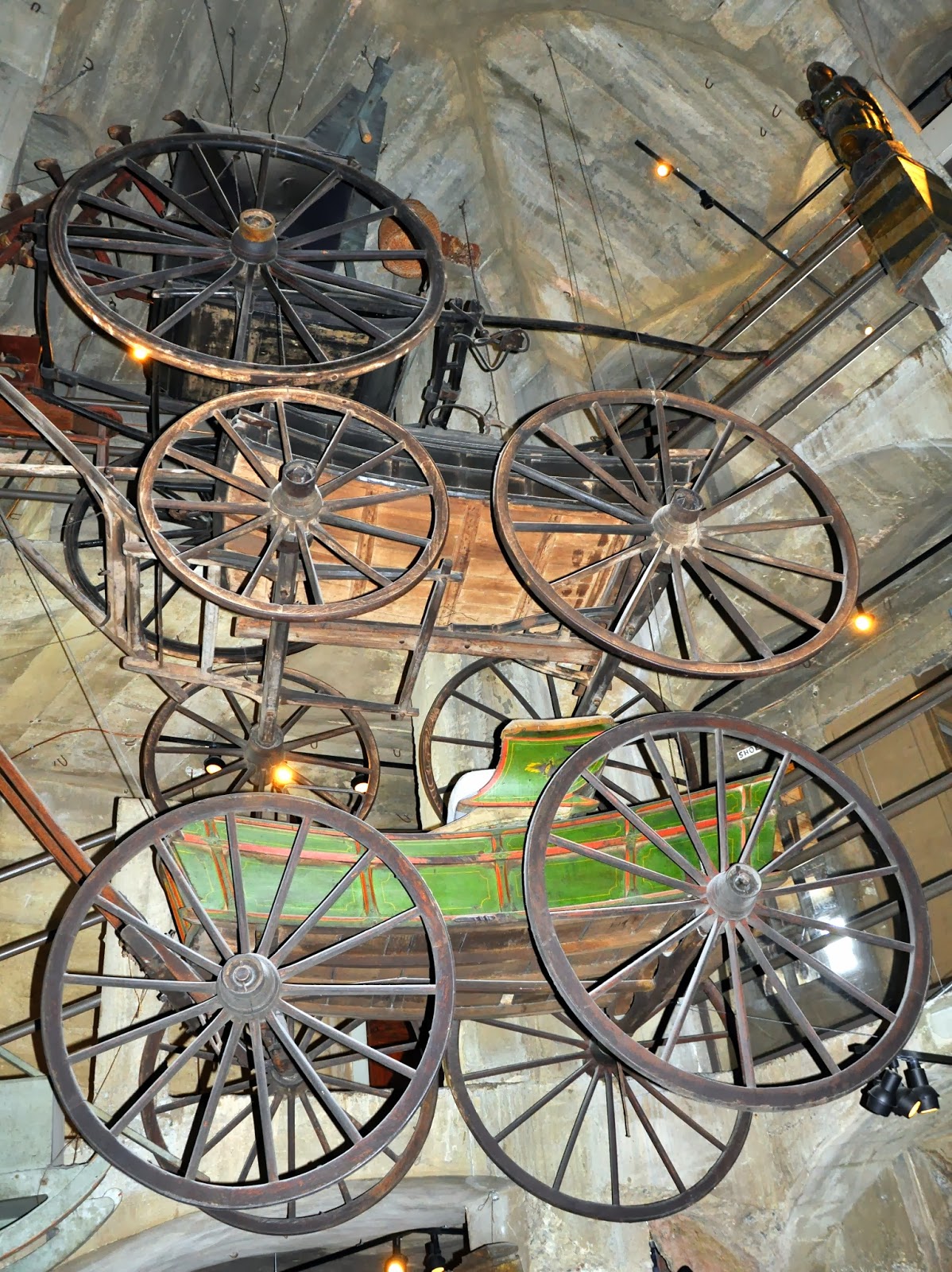 Mercer ended up gathering almost 30,000 items, ranging from hand tools to horse-drawn vehicles, and assembled this collection in a system of his own devising.


The towering central hall of the Museum displays the largest objects in the collection: a whale boat, a stage coach, and a Conestoga wagon. There is stuff hanging on the walls. There is stuff displayed on the floor. There is stuff hanging from the ceiling. Wherever your eye drifts, there is very, very cool, and interesting stuff. Whaling boats, buggies, wagons, old-time horse drawn fire engines, old wooden Indians (not very PC). Tools and chains, yokes and harnesses, baskets and boxes, and just item after item after item is hanging and on display (one wonders whether they ever dust it -- and what a huge chore that must be!). 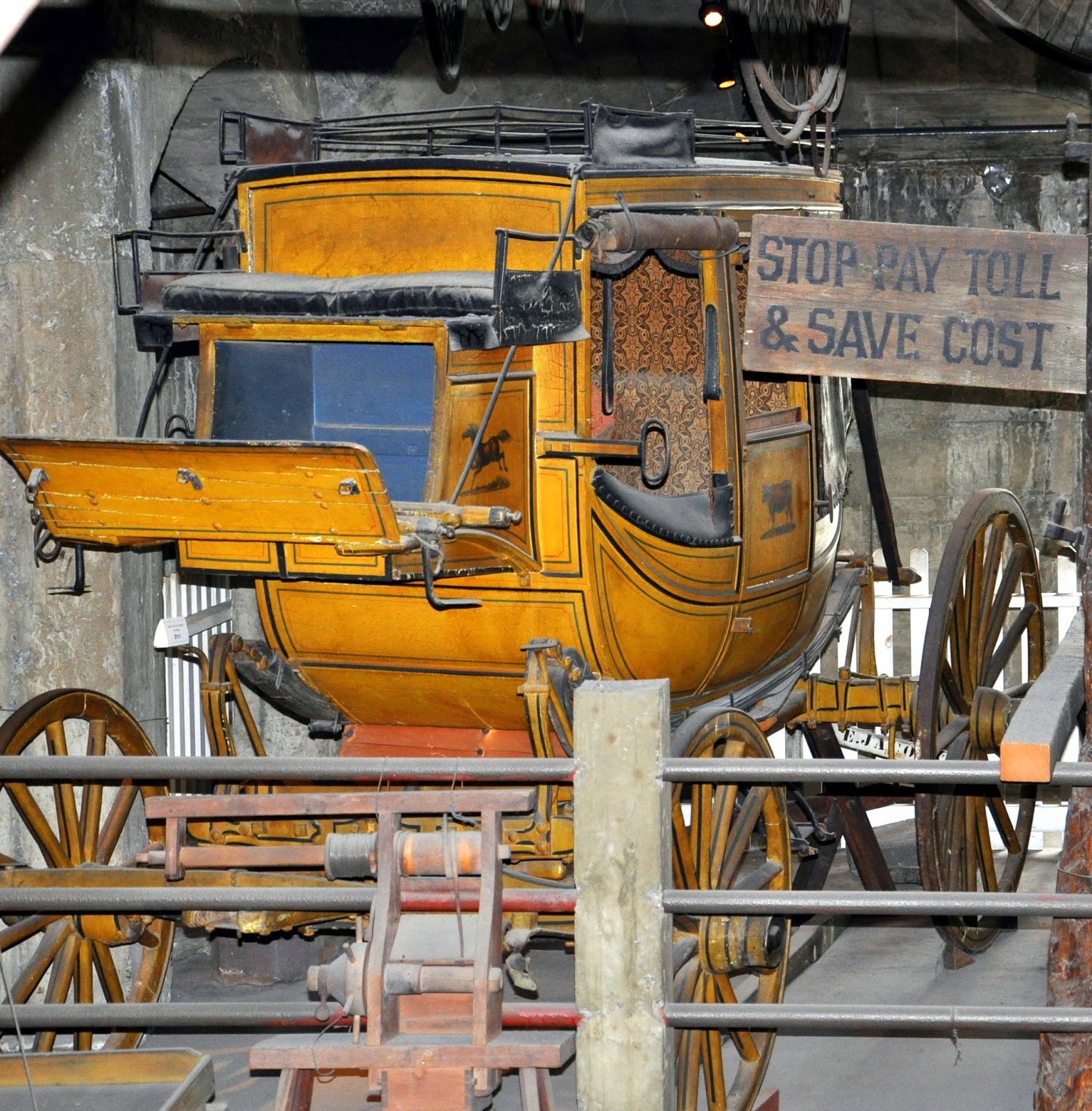 This was how he envisioned the museum, and this is how it continues to be displayed. Apart from saving space, Mercer's exhibit method illustrates a 19th century delight in the accumulation and display of material objects. Mercer had grown to manhood in rooms filled with cultural artifacts. His first ceramic studio was filled with objects dangling from the walls and ceiling. And the very first exhibit of his tool collection in 1897, he hung artifacts from trees. He had other motives as well. Many of these objects were still familiar to his contemporaries. Hanging them forced visitors to see familiar, everyday objects in a new way.

Always with the blog in mind, I wanted to try to capture the experience in the photographs I took. I found it almost impossible. There was too much, it was hard to "frame" or make a photo composition that made sense. It was frustrating and amazing, at the same time.

On each level surrounding the court, he installed smaller exhibits in a warren of alcoves, niches, and rooms, each themed by the objects' purpose: healing arts, tinsmithing, dairying, illumination, shoemaking, candymaking, music making, and so on. The end result of the building is a unique interior that is both logical -- each category resides in its own space -- and provocative (the sheer quantity of artifacts, but separated from the viewer, forcing you to look in, as if you were peeking into windows, which, actually, you are). If you go, plan on spending a good two hours, maybe even more. I felt like I was poking around someone's very cluttered attic -- such treasures! (Thus, why they refer to the Mercer Museum as a "Castle of Treasures.") No, you won't be able to see or absorb everything, but I'm not sure that's even possible, anyway. 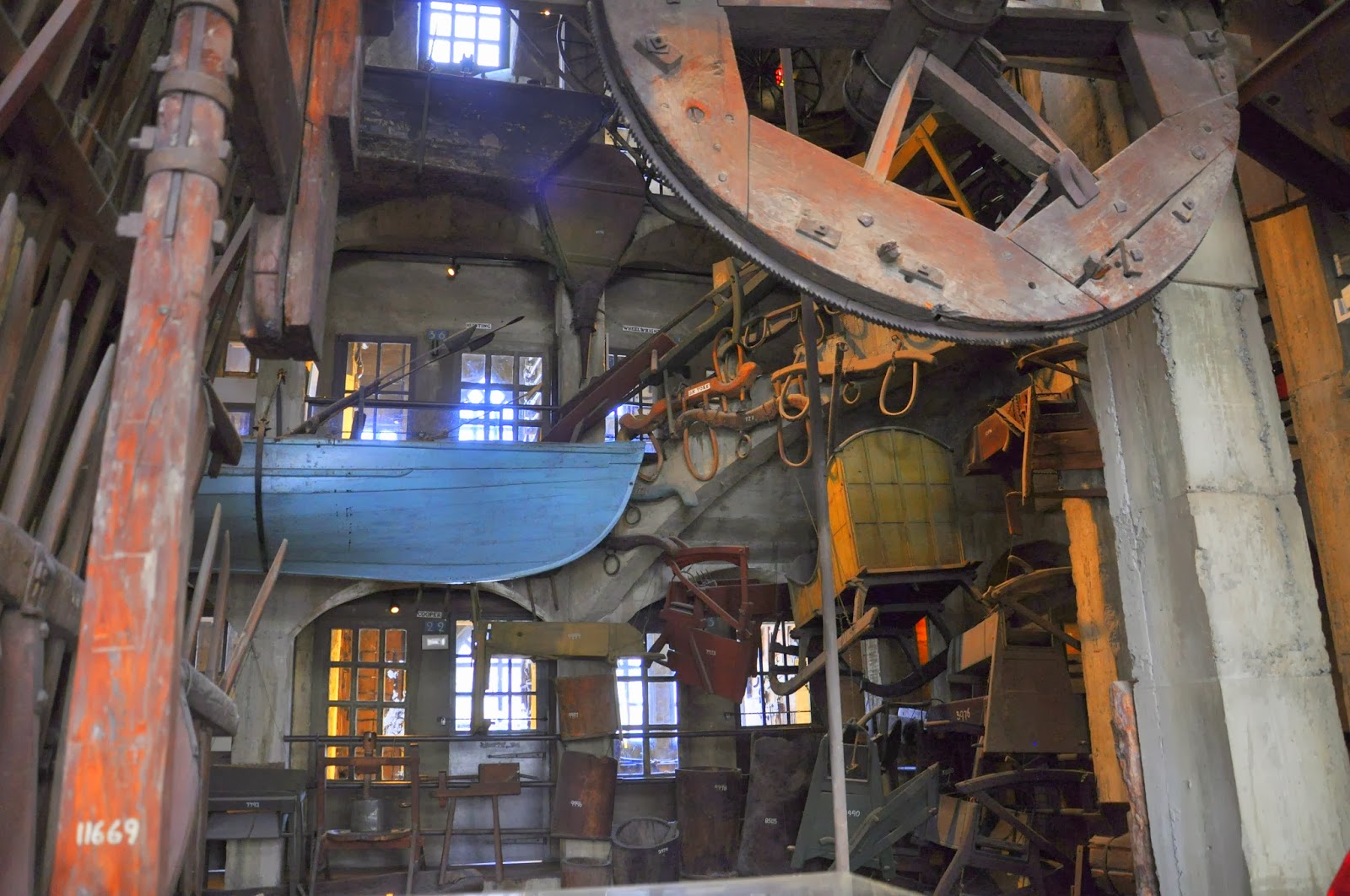 Browsing through the exhibits reminds me of country sales my parents dragged me to when I was a little girl. Like items were placed -- even heaped -- together, but with no or very little explanation. Although the museum identifies the objects, and does occasionally offer explanations of use, it's not enough. Even if they did provide detailed explanations, there isn't enough time to read it all. Since these tools and artifacts -- familiar and recognizable items to a 19th century American -- are mysterious to all except those who study a way of life long since past, it would be fascinating to see demonstrations of how the tools and items were used.

For lunch we decided to walk down State Street in Doylestown -- just a block or two away from Mercer Museum, and only about a mile away from Fonthill Castle. The quaint main-town area offers a variety of lovely restaurants. We followed our nose to Paganini's Ristorante, a delightful little Italian restaurant that specialized in wood-fired pizzas. 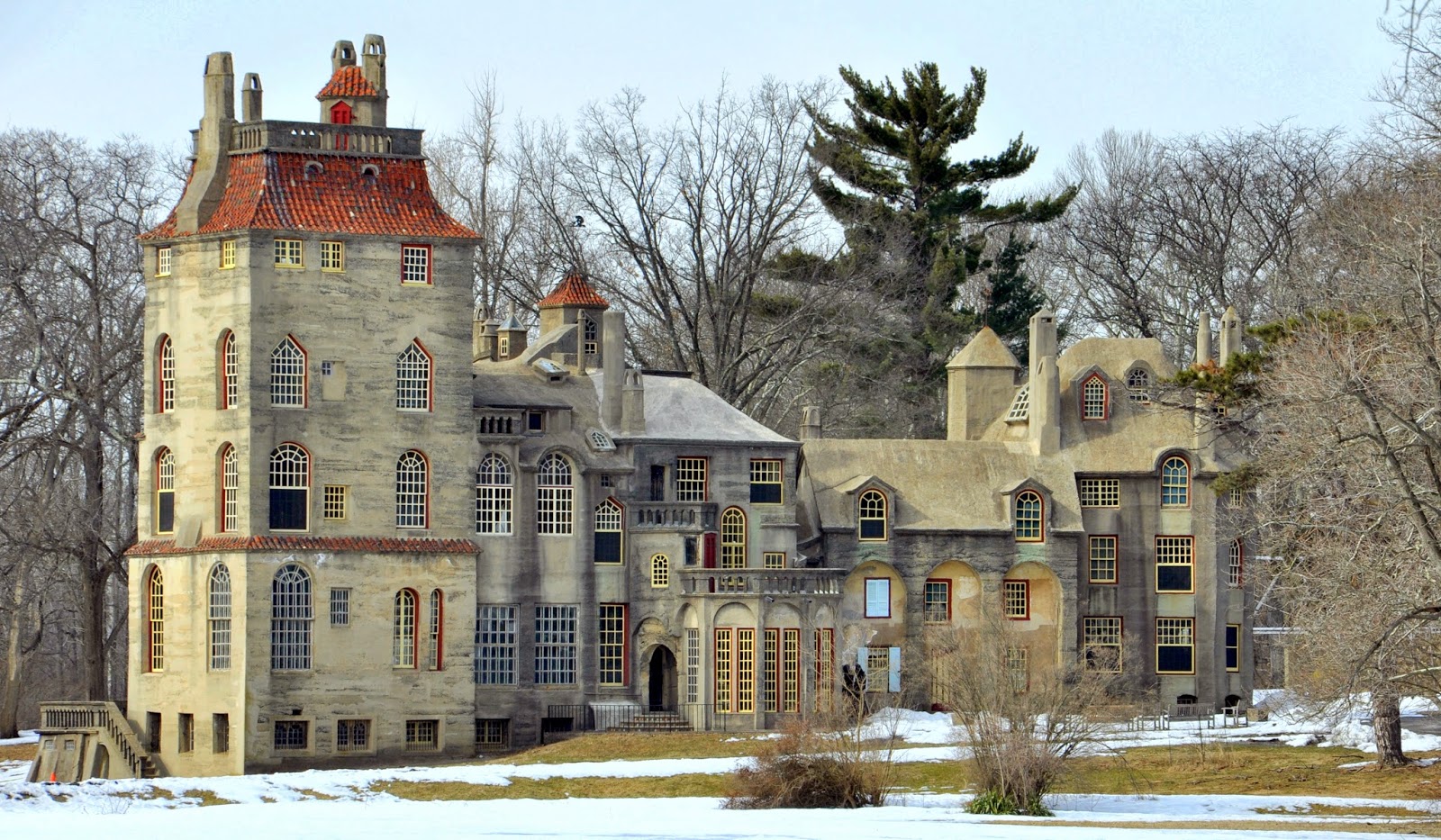 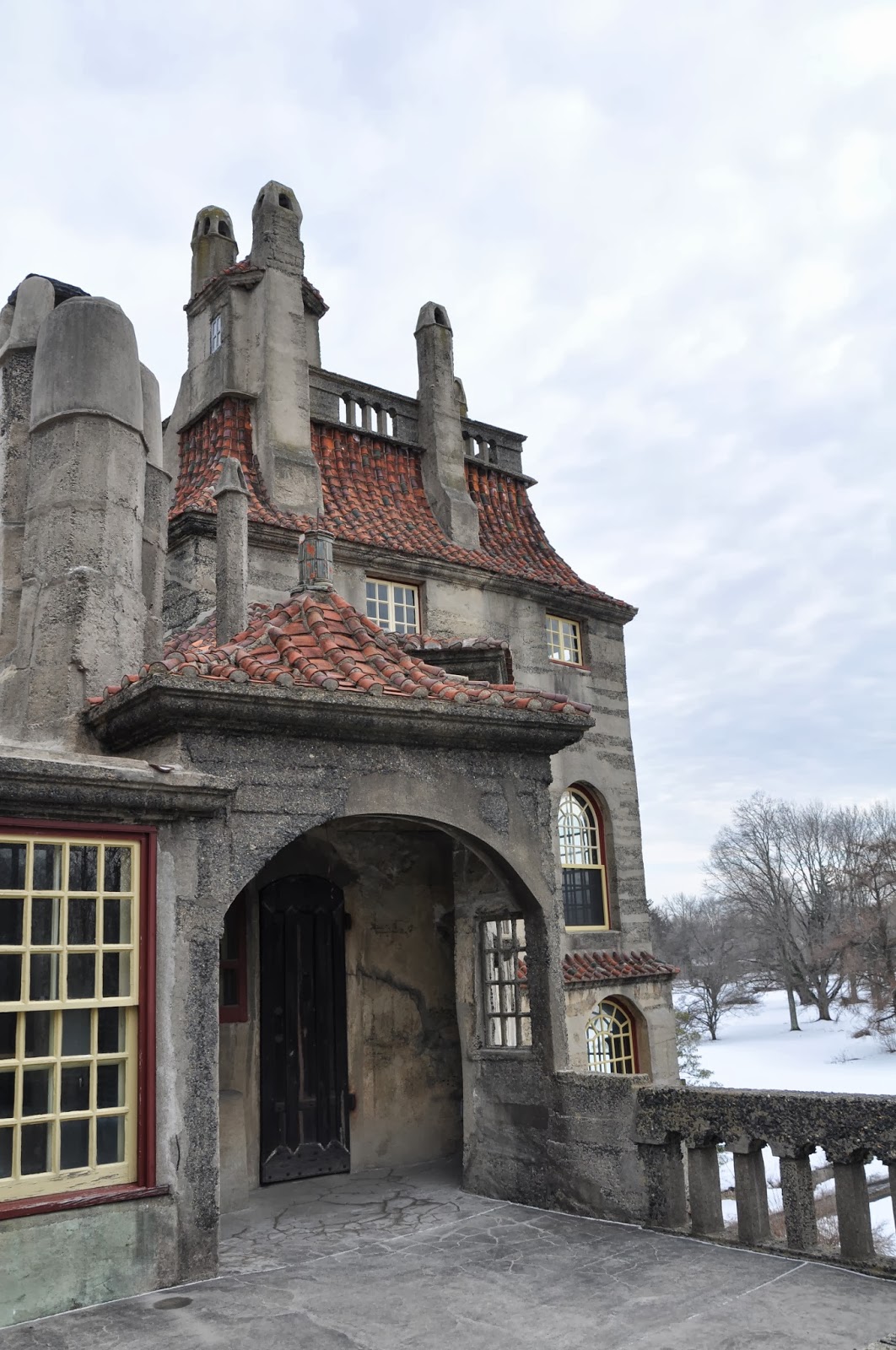 After lunch we headed to Mercer's dream house, another concrete castle built between 1908 and 1912. Fonthill Castle has more than 44 rooms, 18 fireplaces, 32 staircases, and more than 200 windows of various sizes and shapes.Mercer believed in recycling and reusing, so if he encountered at a sale an old window from an old house or church or other public building that he thought would fit his castle, he bought it and inserted it into his design. Thus, there didn't seem to be many windows alike, and often within a room there would be windows that didn't quite match the others. His castle seems organic, in that it seemed to have been designed from the inside out. The ceilings are sloped and rounded (all with tiles inserted), and few rooms are square or rectangular. 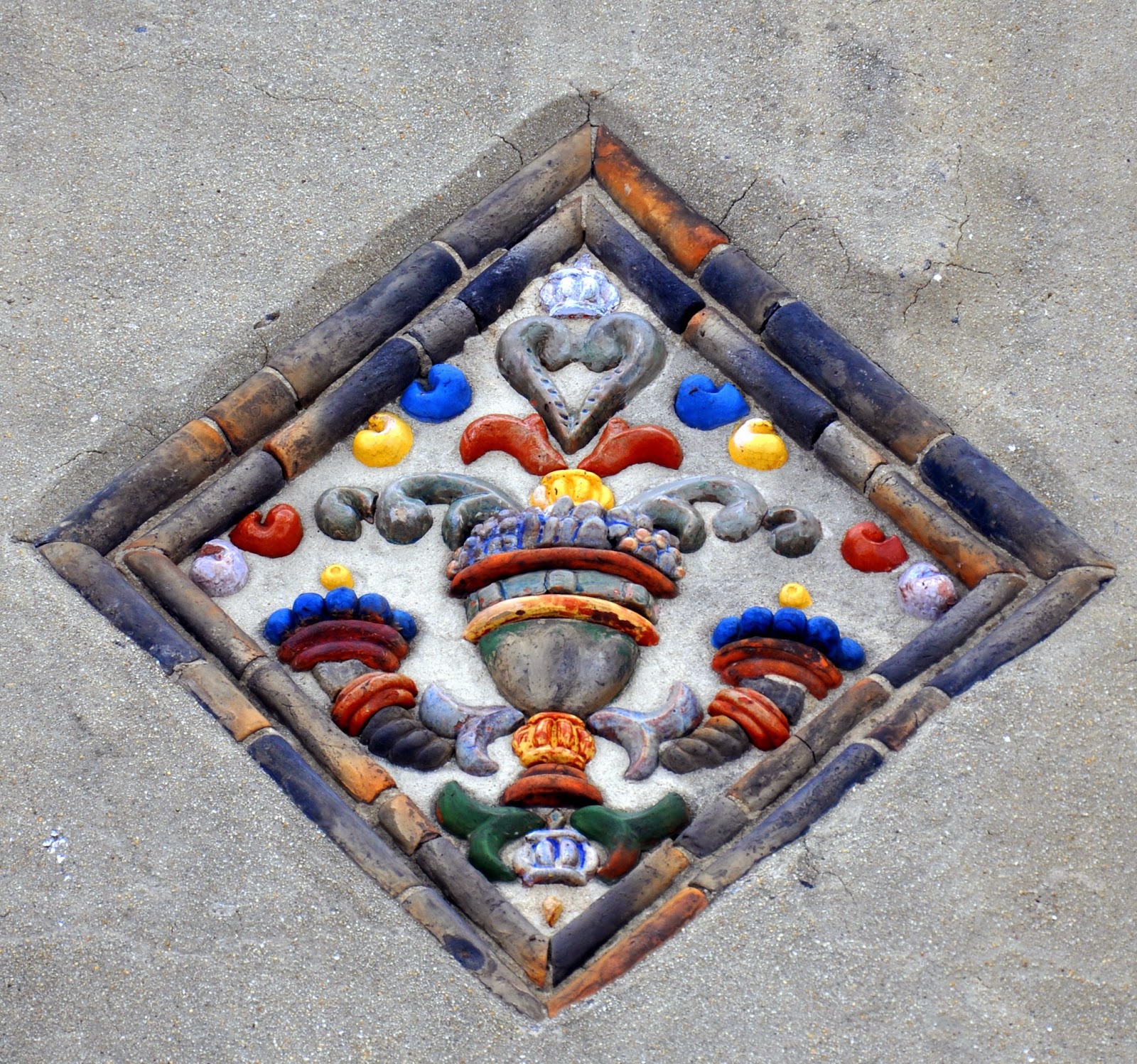 Fonthill is already "castle cool" enough. But here again, Mercer really let his imagination loose on the inside. Tiles from the Moravian Pottery and Tile Works, which Mercer had founded in part to preserve the glazing and pottery tradition in Pennsylvania, are on the castle's floors, walls, columns, and ceiling. Mercer's furniture, print and book collections, and belongings are still there as well -- it's easy to sense his presence, as if he got up and left the room right before the tour group entered.

I definitely would like to go back to Fonthill Castle -- it certainly captured my imagination. In fact, there's a Behind the Scenes Tour being offered in a couple of weeks, on 29 March, beginning at 6:30 pm and running to 9:30 pm. This tour travels up the to the castle's top tower and down through back passages, visiting areas of the castle not on the regular daytime tour, including the kitchen, the crypt, and the terrace pavilion.

Afterward, it's worth a visit to the Moravian Tile Works, still run as a living history -- and still producing very lovely tiles! The Tile Works are adjoining Fonthill Castle -- just on the other side of the parking lot.

Tip #1: Go in cool weather. If you go in the winter, dress warmly. The Mercer Museum is mostly NOT heated. Fonthill Castle is mostly heated, sort of, but you'll want a jacket for a few rooms that were quite cold, and the house tour leads you outside to one of the terraces. Neither castle is air-conditioned, and I can imagine it gets miserable in there in the hottest weather.

Tip#2: We made this a day trip, leaving Baltimore around 9 a.m. We returned home near 7 p.m. That didn't leave us any time to tour the Tile Works. So consider making it an overnight trip. The Michener Art Museum is just opposite the Mercer Museum; unfortunately, we didn't have enough time to visit it. There are also a variety of other things to go see and do in Bucks County, including 12 covered bridges, antiques stores galore, and several wineries.

Eats: Stroll around Doylestown to one of the many restaurants.

Dogs: No, not on this day trip. Sorry Fido!