Three Wineries on a Spring Sunday

A warm March Sunday beckoned me out of my winter hideout, and what better way to do than to go visit a few wineries in the beautiful Maryland countryside?
I've lived in my neighborhood for over a decade, but I've not been a good neighbor. I like my neighbors but I realized recently I hardly knew them. I thought an exploration of some wineries not too far from our homes would be a nice way to start fixing that, so I invited my neighbors to join me on this "day trip." Two neighbors, Terrie and Paula, graciously agreed to join me. 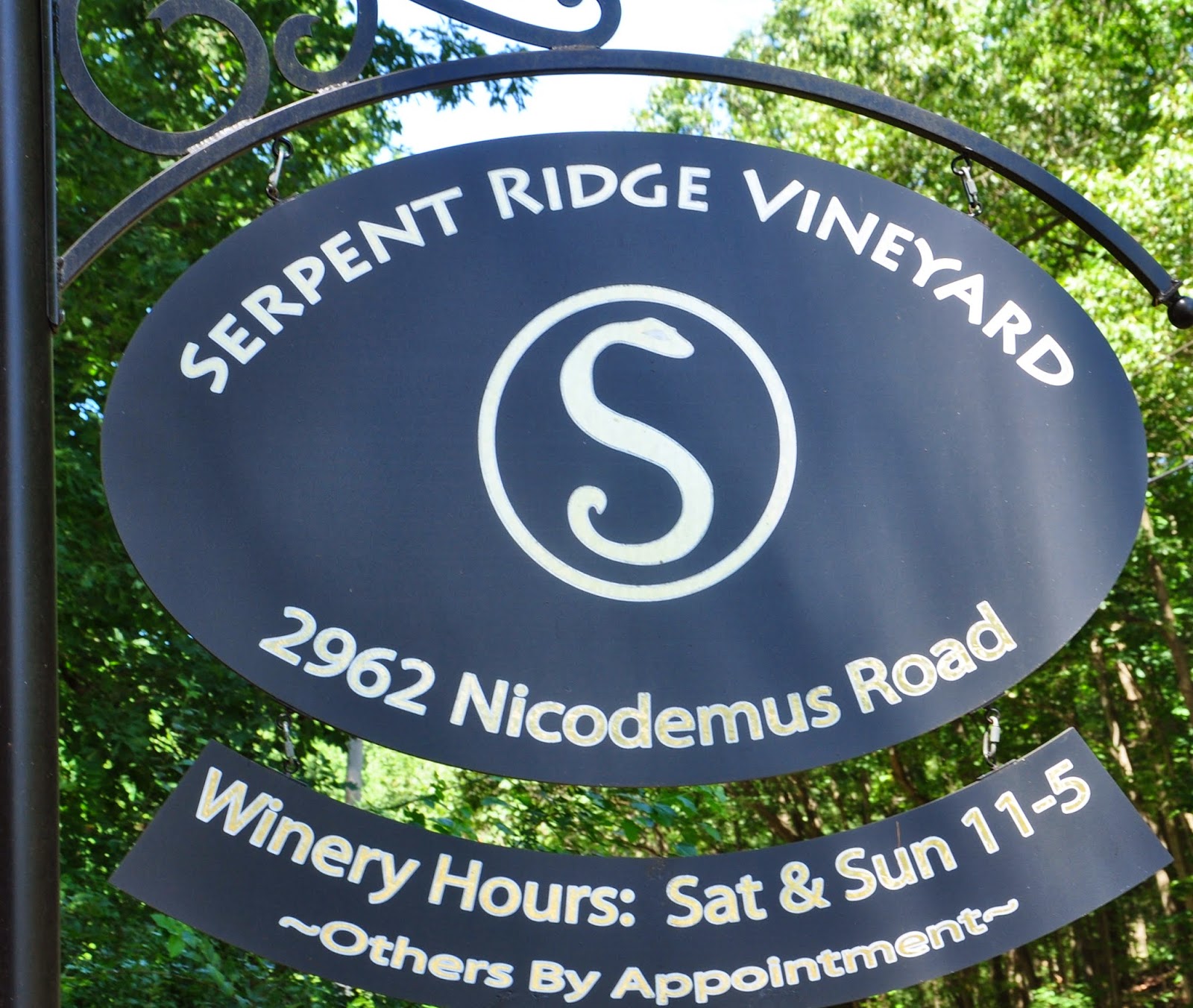 One of the wineries I selected was one I've been to and enjoyed before: Serpent Ridge. New owners Karen Smith and Hal Roche took over in December. I was curious, so after the visit, I asked them: why purchase a winery? To me, it seems like a lot of work!**
"Owning a vineyard and winery was a passion of ours and something we had been dreaming about," Karen said. She noted that after doing some research, it seemed like an "impossible dream" due to the amount of time and effort it takes to start a vineyards from the ground up. "We have visited numerous wineries and vineyards, enjoyed the relaxed atmosphere, the character of each one, and of course the experience of learning about and tasting new wines!" The difficulties in starting up a new vineyard from scratch caused them to explore purchasing one that was already operating.

Serpent Ridge was a logical choice, in part, she said, because they had volunteered at Serpent Ridge and learned more about growing grapes, harvesting them, and the whole production process. "Working with our friends, the former owners of Serpent Ridge, we learned about the business and all its operations -- we loved everything about it -- the hard work, the lifestyle, the beauty and serenity of the vineyard, and of course, all the wonderful people we've met and continue to meet!"

The good news, for fans of Serpent Ridge, is that the new owners' philosophy on wine making is still very much aligned to Serpent Ridge's original philosophy. "We believe that small scale winemaking, with its hands on personal attention, takes on an artisan quality," she said. "Our wine making techniques vary according to the demands of the fruit rather than any preconceived recipe, using old world techniques while embracing new age technology."
Each vintage is grown and/or vinified in small lots followed by gentle ageing in stainless steel, traditional and new age oak. "We want to make a quality product, we want to show demonstrate all the goodness in Maryland wines, and most of all, we want to create a unique and pleasurable experience for all of our guests," she said. 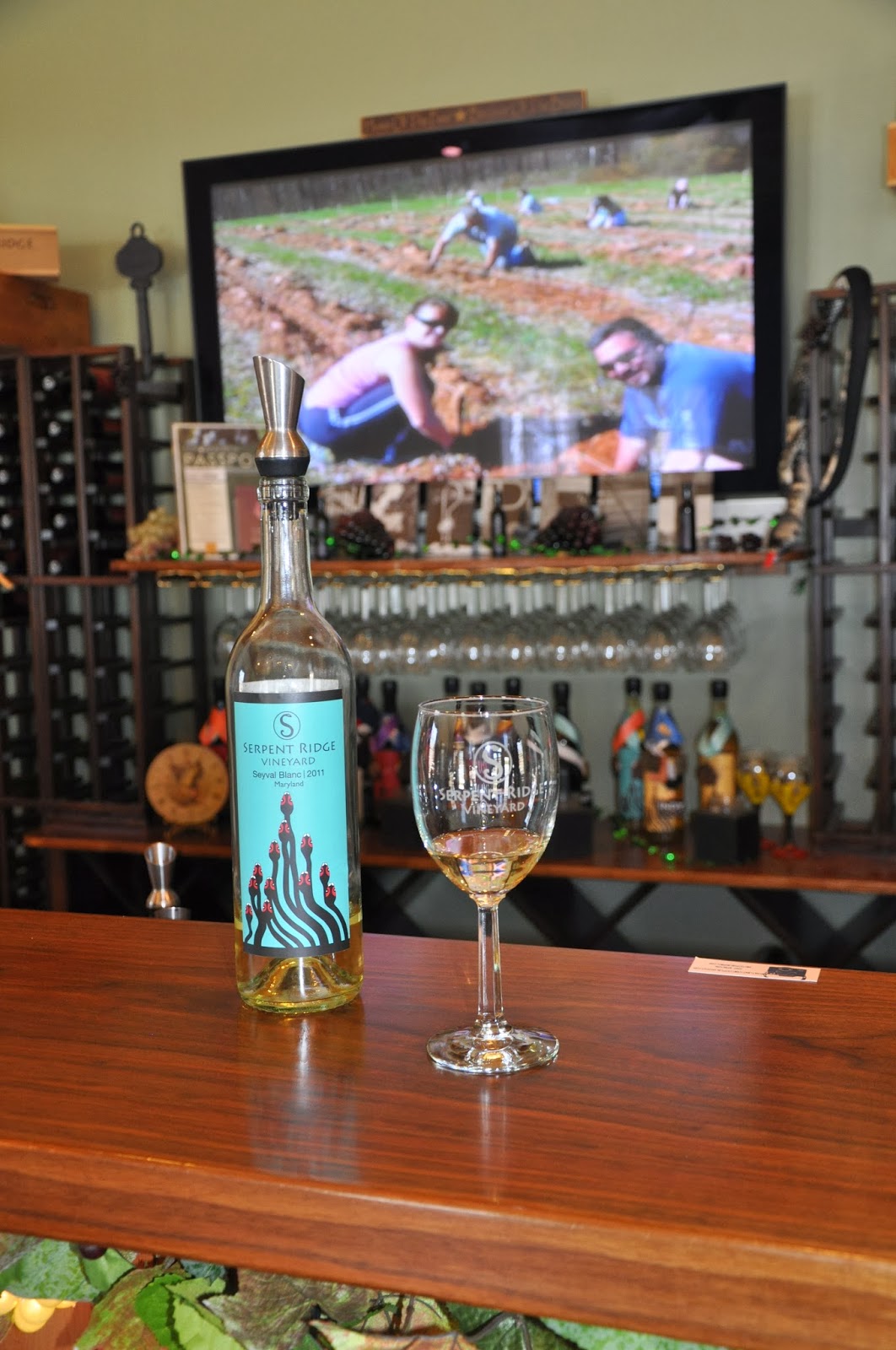 But every new owner will exert some new influences, and Karen and Hal are no different, although they plan to keep Serpent Ridge's core (dry) best sellers, such as Vintner's Cabernet, Basilisk, and my personal favorite, the Albarino, based upon the grapes the vineyard grows and those the winery can purchase locally. "We would like to expand our selection slightly by offering one or two semi-sweet wines to ensure we appeal to all of our guests," she said.  They also plan to enlarge their production to 5 thousand cases of wine a year, expand the production room, and "infuse" their wines into a few more local restaurants and stores.
When we sampled Slither, a dessert red, the server advised us to take a sip of the wine, then eat a bite of a dark chocolate Hersey's kiss, then take another sip. Yum! The chocolate  really brought a cherry taste in the wine to life, and I could well imagine serving Slither with some chocolate candy as an after-dinner dessert. (This is why I usually like to bring a few Hersey's kisses with me. It's surprising how much the chocolate can affect the taste of the wine.) As with my previous visit, I very much enjoyed the Albarino, and left with a bottle of it to enjoy at a later time.
Fans of Serpent Ridge should be on the look out for a few additional changes. They will be extending the winery's hours and holding more events at the winery, including music, craft projects, yoga, wine dinners, and other special events so that locals, visitors, tourists, and bloggers like me can have a "unique winery experience." 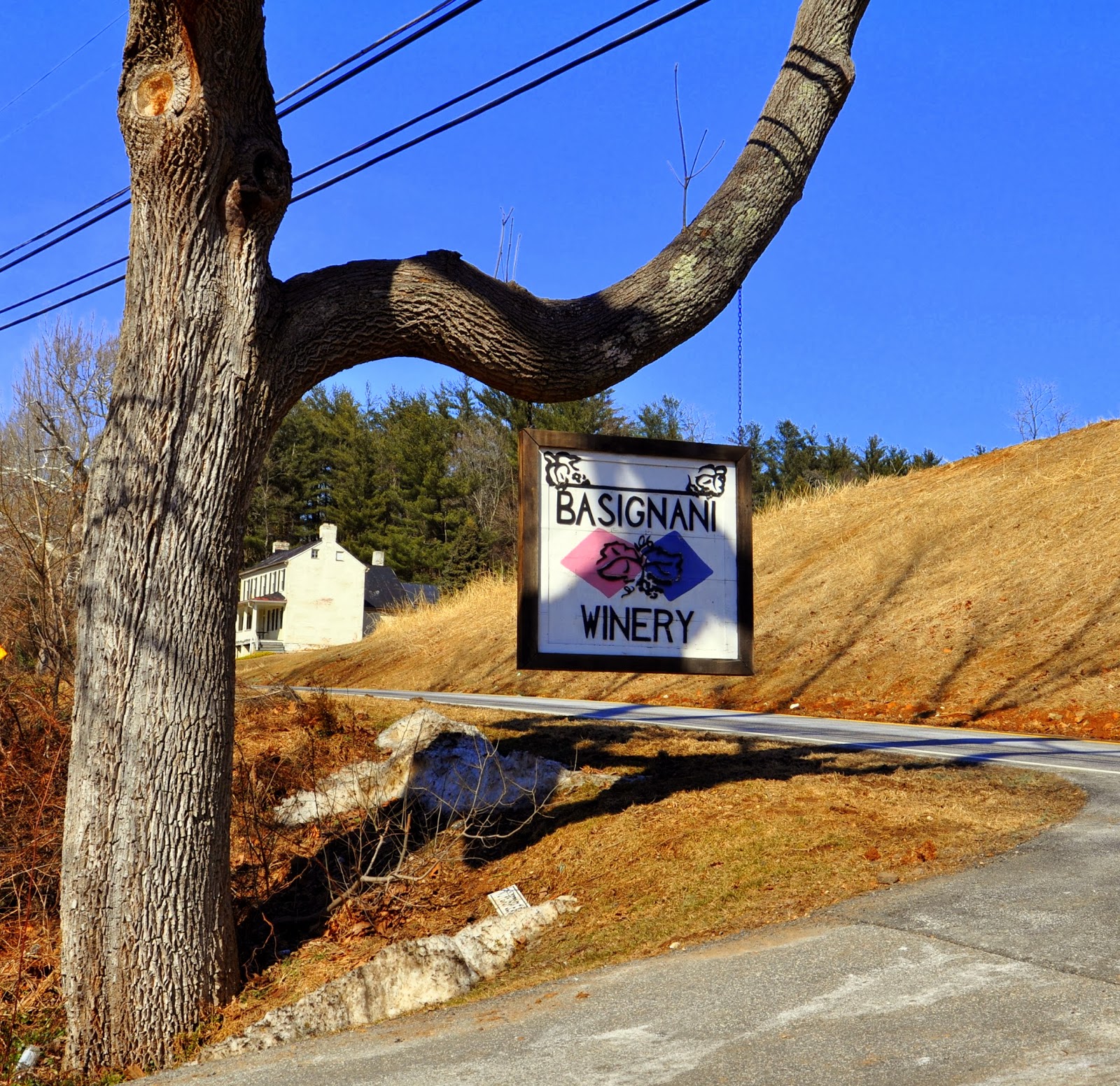 From Serpent Ridge we headed to Basignani Winery. This is one of Maryland's older wineries, having been established in 1986. Basignani styles itself as a traditional winery, using traditional cellar methods and the wines, which are estate grown and bottled, are classically styled and produced.
Bertero Basignani inherited his love of winemaking from his grandparents, Annunziata and Scandiano Bechini, who brought the tradition of home winemaking with them from their native Italy. Just after he married his wife, Lynn, in 1974, he planted 60 vines, 10 each of 6 different varieties. Using his grandmother’s grape press, Bert began experimenting with winemaking. Four decades later, and his winery is highly regarded in Maryland, and his wine tasting room quite crowded! 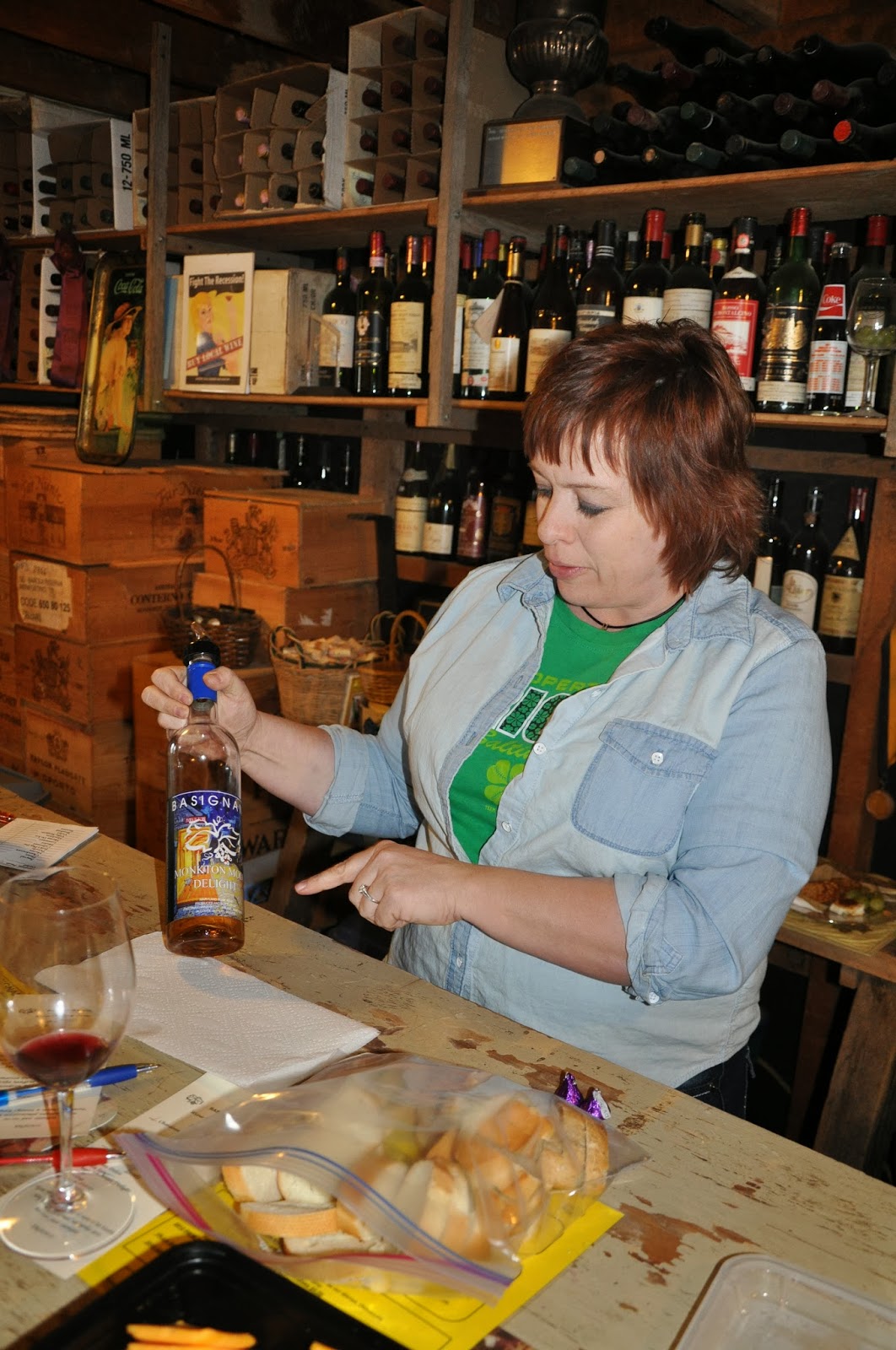 At Basignani, we tasted a dry Chardonnay, as well as Marisa and Piccolo, two dry reds. ($5 for six selections from a list of 12 different wines.) Since I lean toward the sweeter wines, I chose evenly between dry and sweeter wines, so the next three were very sweet: Marisa Dolce, the delightful Monkton Moon Delight (I love it for the name!), and their Riesling, which I enjoyed. I surprised myself again: I preferred the drier Marisa over the Marisa Dolce.
Terri and Paula preferred the Cabernet Sauvignon and the Villa Sangria, neither of which I tried. Terri and Paula also tried the Lorenzino Reserve, and when I noticed our server (whose name escapes me but was very chatty and nice--pictured here) pull out two Hersey's kisses, I offered to drop one of the sweeter wines I'd selected so I could try the Lorenzino with the chocolate. Our server pooh poohed that idea, and poured me a sample of the Lorenzino anyway. Although this wasn't necessarily a dessert wine, I was impressed by how, once again, the pairing of chocolate with a red wine really creates a nice palate change, changing both for the better (which just proves to me, again, that everything can be improved by adding either chocolate or wine). 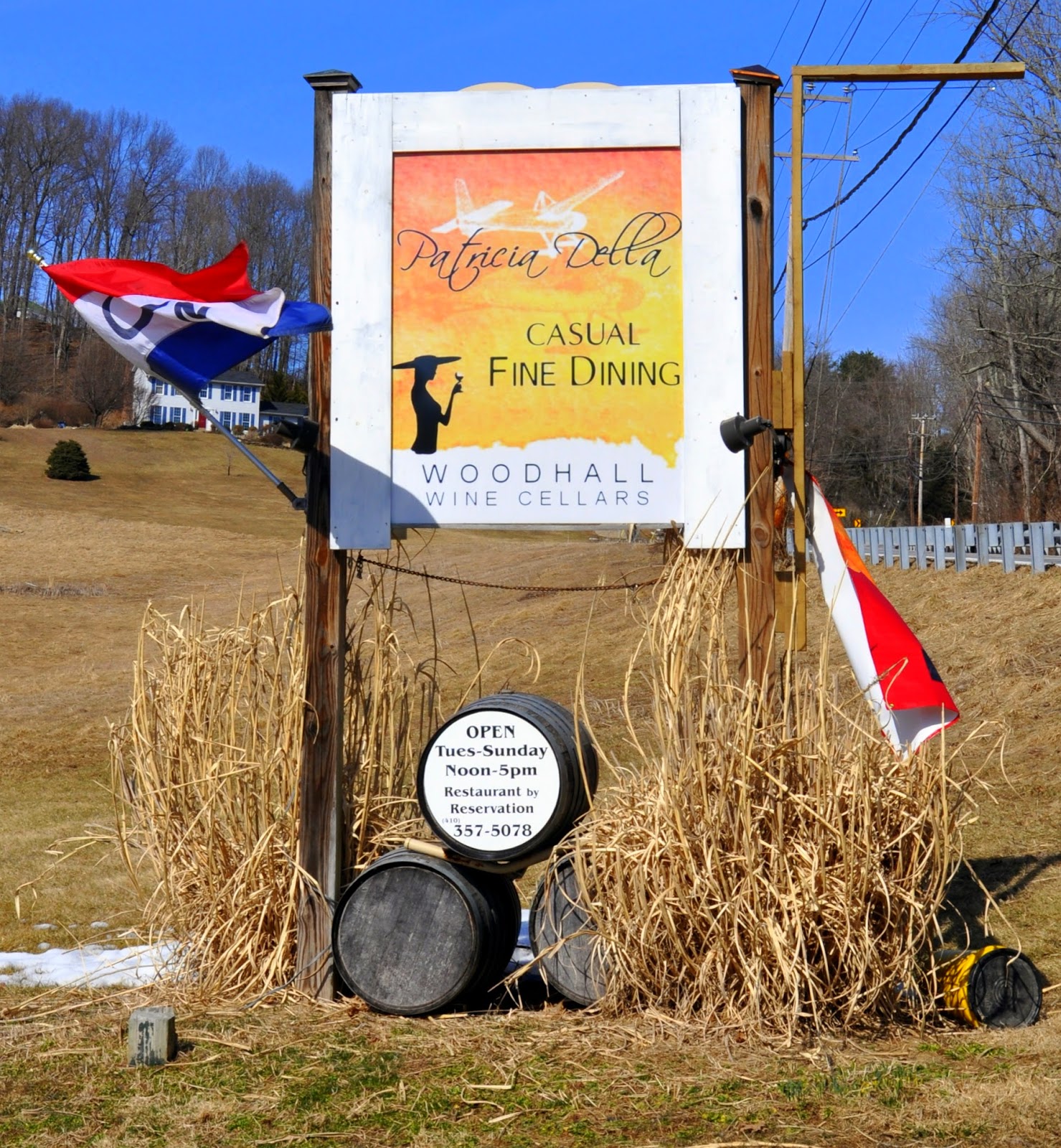 One of the nicer aspects of all three wineries we visited this Sunday was that none minded that we brought our own food along (most allow you to bring your own food into the winery, but some do not -- it's best to call ahead and ask what is permitted). We'd brought some whole grain and white baquette bread, assorted cheeses, and grapes.
Only minutes away from Basignani, our final stop was Woodhall Winecellars, one of Maryland's oldest "boutique family wineries."
Woodhall wines are fermented in small lots, keeping the fruit from each vineyard separate, so that Woodhall's blending program can take maximum advantage of "terroir" (the effects of climate and soils on fruit, hence wine, quality). The wines are aged in barrel and bottle until ready for consumption.
In addition to its grape wines, Woodhall also offers two nice apple wines: a semi-dry apple wine and its "Sparks Apple Ice Wine," a rich dessert wine, both made from blends of six varieties of apples from Milburn Orchard in Cecil County, MD. 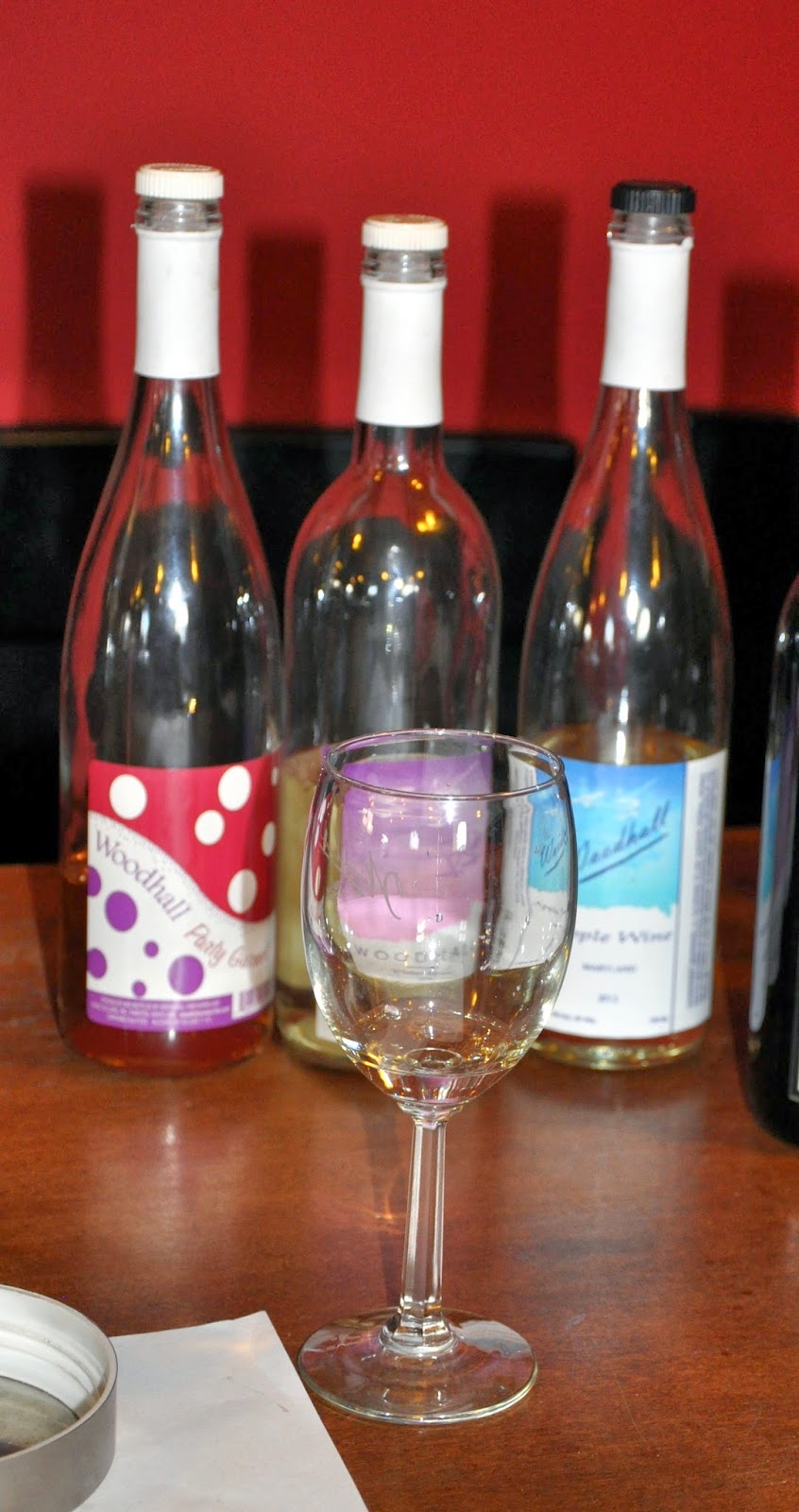 **I emailed all three wineries, in the interest of fairness, to ask them questions about their vineyards. Only Serpent Ridge responded.

Tip #1: Avoid the crowds -- go on Sunday. Wineries tend to be less crowded on Sundays than on Saturdays.

Tip #2: If you avoid purchasing wine and pack your own picnic, this is a budget-friendly day trip!
Getting there: Serpent Ridge is located at 2962 Nicodemus Rd, Westminster, MD 21157; Basignani Winery is located at 15722 Falls Rd, Sparks, MD 21152; and Woodhall Vineyards is located at 17912 York Rd, Parkton, MD 21120.
Hours: Serpent Ridge is open Saturday and Sunday, 11 a.m. to 5 p.m.; Basignani is open Wednesday to Sunday from 11:30 a.m. until 5:30 p.m.; Woodhall Winecellars is open Tuesday through Sunday from 12 to 5 p.m.
Dogs: Nooooooo!
Websites: Serpent Ridge Vineyards www.serpentridge.com; Basignai Vineyards www.basignani.com; and Woodhall Winecellars www.woodhallwinecellars.com.
Check out the blog's FB page for updates on places we've visited and blogged about:  facebook.com/midatlanticdaytrips!
Have you daytripped somewhere interesting? I'd love to hear what you're doing! Email [email protected] if you're interested in being a guest-blogger!