Biking, Lunch, and then Some Wine: The NCR Trail, Woodhall Winecellars, and Royal Rabbit Vineyards

There is not much that wine doesn't enhance. Is there any better way to round out a few hours biking on Maryland's Northern Central Rail Trail (renamed the Torrey C Brown Rail Trail) than with a trip to two local wineries?

The itinerary for this day trip -- and it was a full day-long day trip -- was bike riding the NCR trail in Parkton. My friend, Barb, and I figured we'd ride down to Monkton, a ride of just over 5 miles, (the trail headed north was covered with snow, ice, and slush), plus the stretch between Parkton and Monkton offers some of the loveliest views of the river that runs alongside. Afterward we'd head to Woodhall Winecellars for lunch at Patricia Stella's "casual fine dining" restaurant and a wine tasting, in Parkton. We'd round out the day with a wine tasting at Royal Rabbit Vineyards, also in Parkton. We arrived at the trail around 9:30 a.m. and with the biking, lunch, and two wineries, ended up back in Ellicott City around 4 p.m. It was a full day indeed!

Bike riding in March is problematic after a winter like the one we've experienced this year. The snow and ice have been slow to go -- has there been enough warm days to melt it? In some places, no! We found only few patches of ice -- there was mostly slush and mud, and lots of downed limbs and trees, which made the going tough (especially for me, since I apparently have much to gain by way of fitness!). 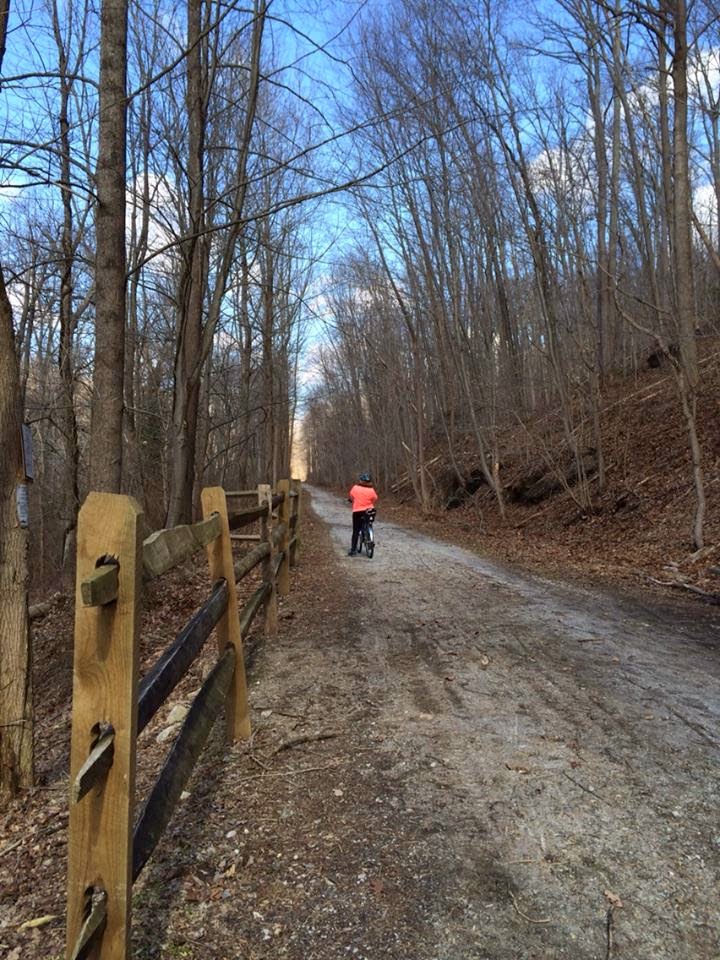 The North Central Railroad, built in 1832, ran between Baltimore and Sunbury, PA, and was one of the oldest rail lines in the country. The railway serviced the growing Baltimore, York, and Harrisburg industries, had 46 stops, 22 in Maryland, and operated for 140 years. It carried passengers, people vacationing at Bentley Springs, and freight between Baltimore and York or Harrisburg, Pennsylvania. As with many things in Maryland, the railroad played a pivotal role in the Civil War, serving as a major transportation route for supplies, food, clothing, and material, as well as troops heading to the South from Camp Curtin and other Northern military training stations. It served the area for another century, eventually ceasing operations in 1972 after Hurricane Agnes (raise your hand if you remember this hurricane!) battered its bridges. The old bed, which was converted to a rail-trail just 12 years later, can still be seen today, mostly apparent in the bridges, which clearly are old railroad bridges.

Thus was born the Torrey C. Brown Rail Trail, formerly and more commonly known as the Northern Central Railroad Trail (NCR Trail), which is one of the best hiking and biking trails in the mid-Atlantic region. Running through Gunpowder Falls State Park, it's a relatively smooth and flat trail, with a crushed stone surface, that extends 20 miles, from Ashland Road in the Hunt Valley area to the Mason Dixon Line, where another rail trail takes over. It was renamed in honor of former Baltimore City representative to the Maryland House of Delegates (1971-1983) and former Maryland Secretary of Natural Resources (1983-1995). Amenities include drinking fountains, picnic tables, benches, and portable restrooms. There are several places where you can stop for food and water; however, because of the rural setting, if you're traveling long distances, I recommend packing enough snacks and water for your trip. 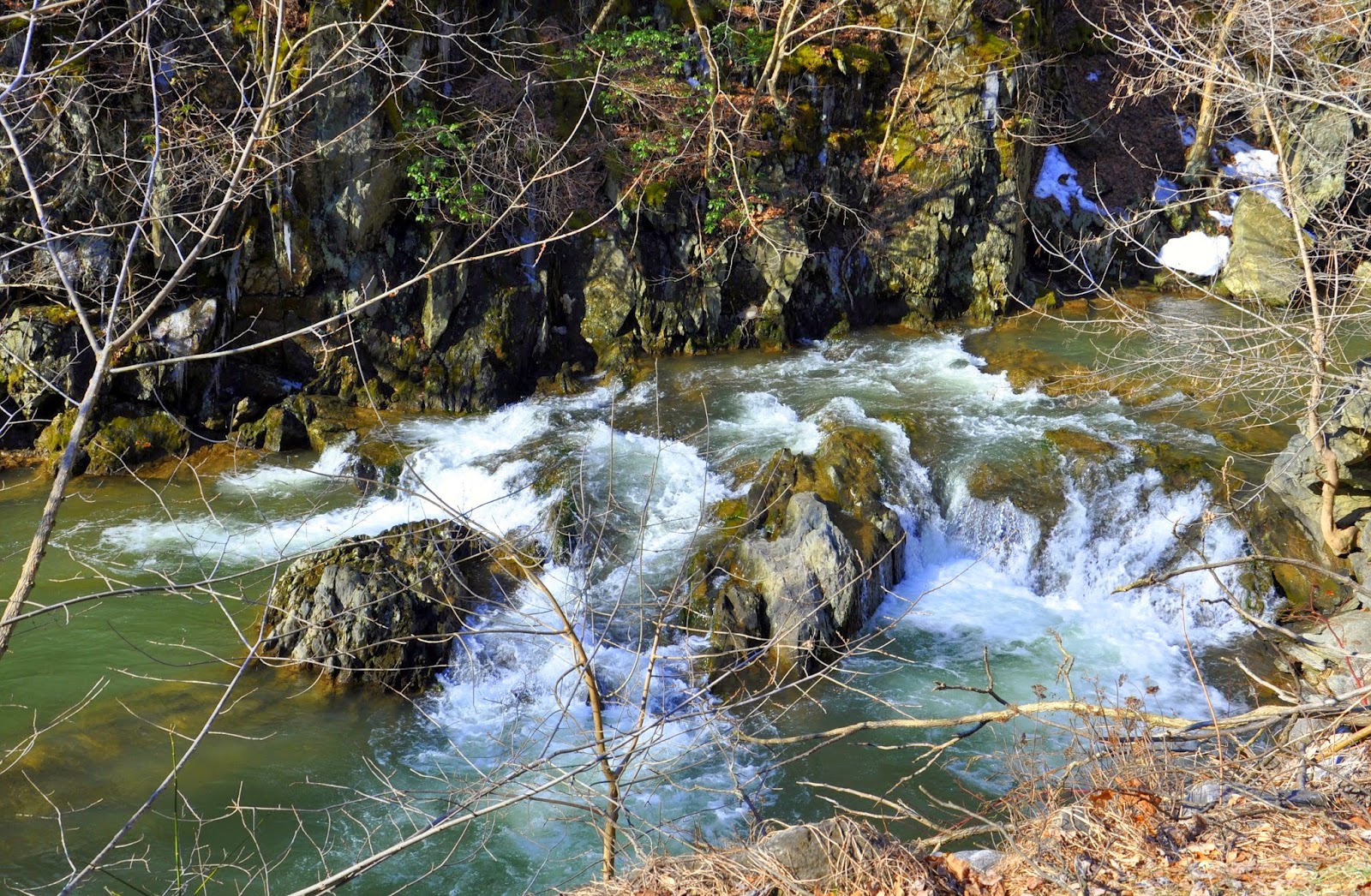 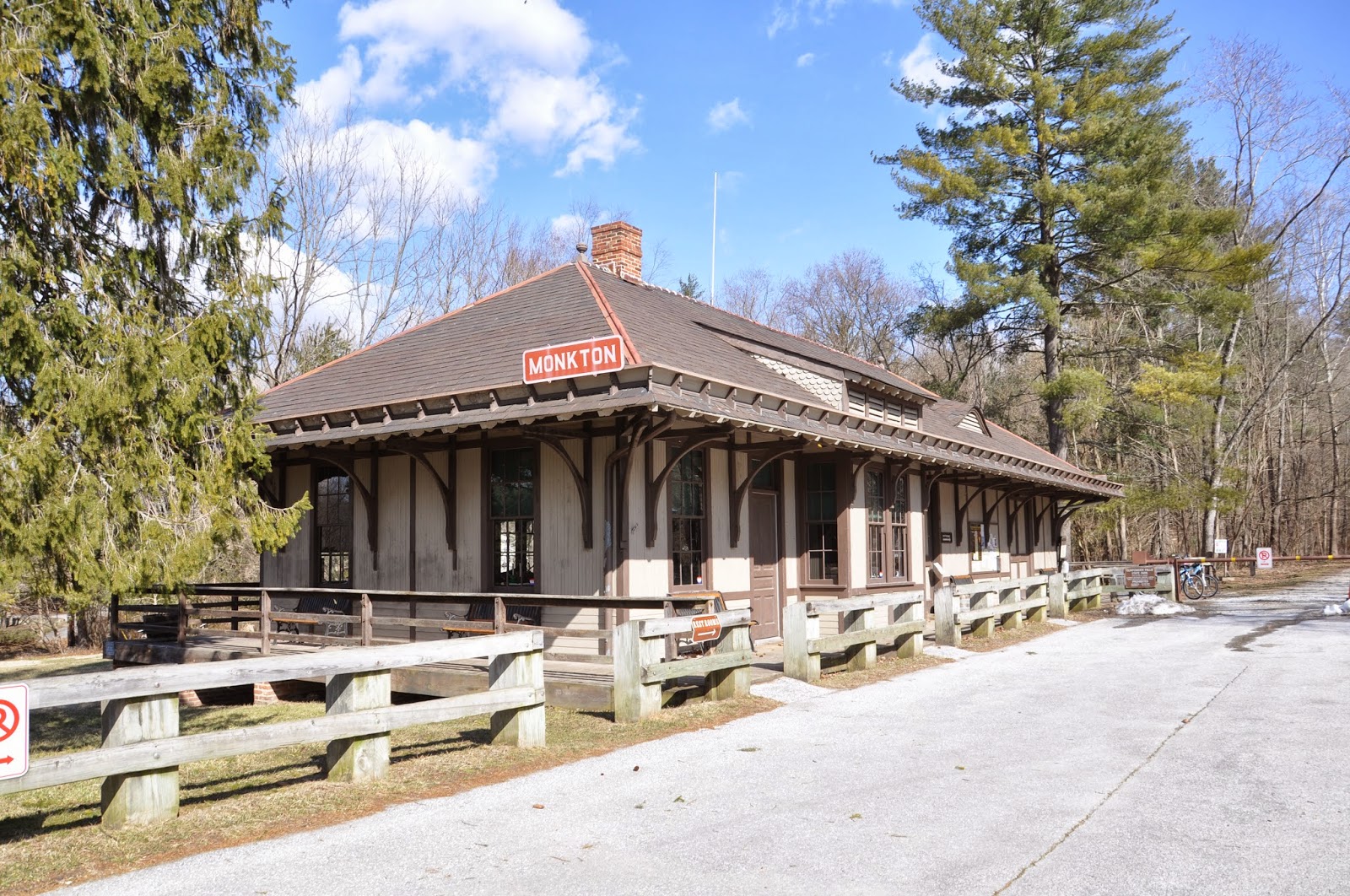 The stretch of the trail heading south from Parkton is beautiful, even in early spring, although it goes without needing to say it that I want to return after the leaves have come out. The trail follows Gunpowder Falls River, Little Falls, and then Bee Tree Run up to Pennsylvania. I am guessing that the stretch between Parkton and Monkton follows Little Falls, but I am not certain, and I couldn't find a definitive name for it. Whatever its name, it is lovely as it winds through groves of trees and between rock outcroppings. Throughout the trail, you can see occasionally interesting old ruins and lovely Victorian-era farm houses.

At Monkton the original train station now serves the trail in warmer weather, providing water fountains, information, rest rooms, and other welcome amenities for trail users. There is some limited parking in Monkton as well.


After we completed our ride, we headed over to Woodhall Winecellars, which was located about 4 miles away from the Parkton NCR Trail parking area. Yes, I visited that winery the previous week, with two other friends. This time, however, we decided to eat lunch at the restaurant onsite, in addition to the wine tasting. This, we felt, added convenience to our trip, since we'd focused on the biking part, and hadn't planned well by bringing along a picnic lunch or snacks for the wineries.

They seemed surprised that we'd wanted lunch, although to be fair, we hadn't called ahead or made reservations or anything like that, and it was technically still the winter season, when not as many folks venture out to the wineries. We were offered a single choice: chicken breast with sun-dried tomato goat cheese spread, lettuce, tomato, onion and a touch of balsamic vinegar served on ciabatta bread. It was tasty, and luckily, exactly what we were looking for, since there were no other choices, except to go hungry. We were served our lunches in the wine tasting room.


If you go to Woodhall, you go for the wines, more than the ambiance, which is perhaps as it ought to be. Although the wine tasting room is what is clearly an old barn, and quaint with stone walls, it is dimly lit, sparsely decorated, and frankly, a little dirty -- the floor needed a good vacuuming. The bowl of oyster crackers needed to be refilled. It seems neglected, but perhaps that will improve with late spring and summer crowds. With little to beautify the entrance -- it's clearly a working farm, and that's part of the coolness of this winery. However, the wines are well regarded -- a colleague at work is a huge fan of Woodhall Winecellars -- and the wines are worth a quick visit!

This trip to Woodhall took an unexpected turn: we ended up having a "chocolate tasting" at the winery as well as a wine tasting. We got to talking with chocolatier Mark Coulbourne, who has a table of his chocolates set up in the wine tasting room. Barb and I purchased the sampler of nine of his signature chocolates to share. Mark noted that he has worked with Woodhall wine maker Chris Kent on a regular basis, including helping him make, blend, and bottle the wine.

Mark noted that he and Chris have worked together to pair a number of Mark's chocolates with their wines. "Our dark chocolates pair up well with Woodhall's Cabernet Sauvignon and Chambourcin," he said.

Mark's story is interesting. Like many of us would LIKE To be, he's a man who's followed his dreams. After too many years of working in a cube farm in the software industry, and being laid off twice, he went to culinary school, and emerged committed to chocolate. "I chose chocolate for a number of reasons,"he said. "It was the one aspect of food service I was most passionate about."

He's worked with chocolate for nearly 10 years and after working in restaurants and bakeries, he struck out on his own. His company, A Dream of Chocolate, produces its chocolates by hand in a commercial kitchen nearby. "Making the transition from working in an office to working in a kitchen hasn't been the easiest process, but I've learned and adapted since we opened up 3 years ago," he said. 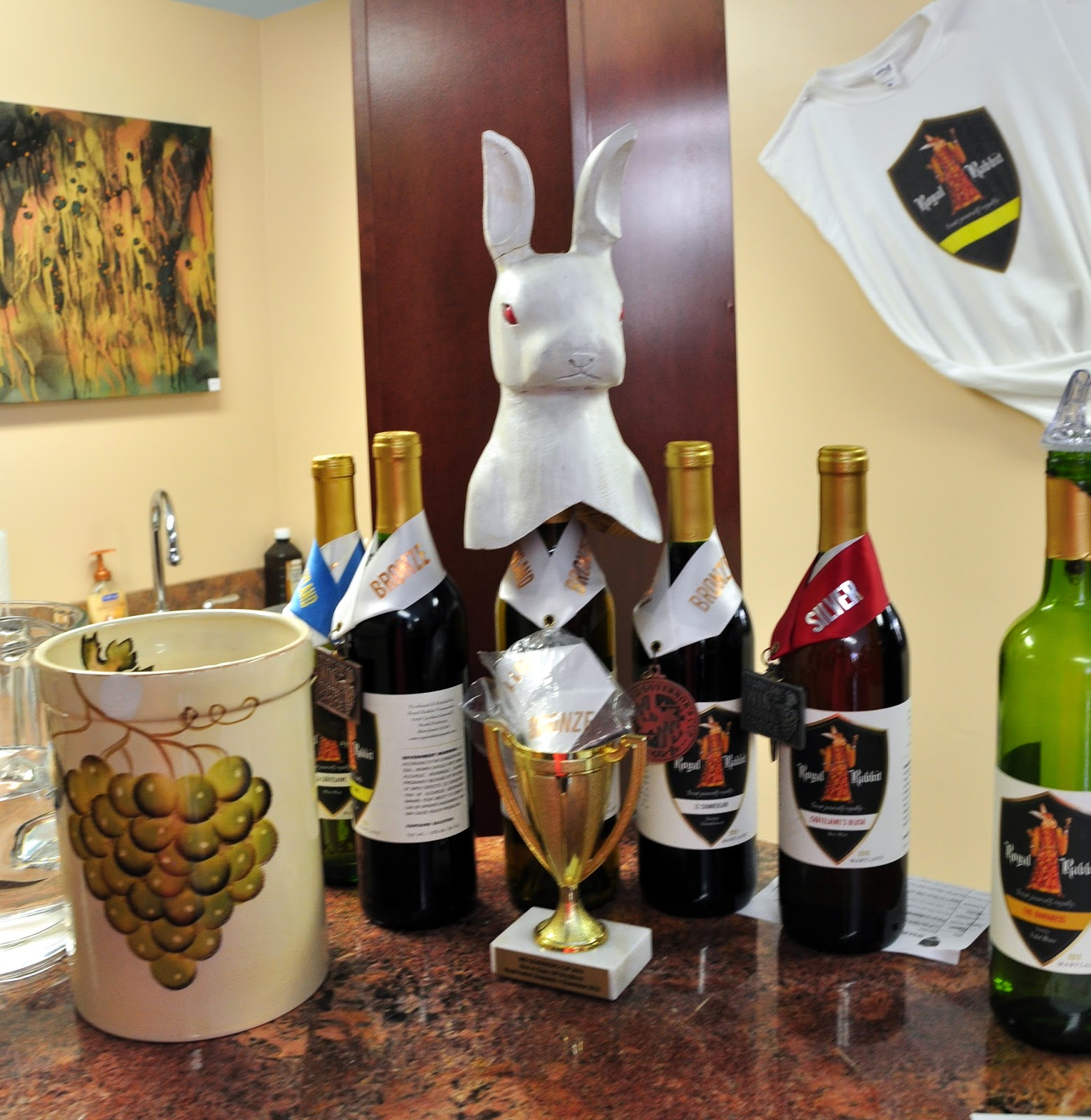 In stark contrast to Woodhall Winecellars, our next stop was Royal Rabbit Vineyards. Although the Tour de Tanks event sponsored by the Mason Dixon Wine Trail brought in a crowd, the owner, Roy Albin warmly greeted every guest, chatting with them for a few minutes.

The tasting room was well lit and invitingly decorated. For the usual fee of $5, the winery offered a tasting of nine wines, including two straight out of the tanks (they kindly allowed us to join in while we were at the winery). The wine tasting room is in the basement of the owner's house, but is cheery, bright, new, and invitingly decorated. The servers, although swamped with visitors, poured their wines knowledgeably, discussing each one in depth and asking questions about our preferences and thoughts about the wines as we sampled.

I preferred the Le Chamberlain, a Chambourcin with a deep red color and a distinctive berry flavor that ends with a little bit of spice. Barb particularly enjoyed tasting the wine right out of the barrel, including the comparison between wine being aged in Hungarian oak and French oak. (She preferred the Hungarian.)

Royal Rabbit also had a table filled with what looked like homemade chocolatey goodness on it. Unfortunately, I didn't get a chance to chat with the candy-maker. Next time I definitely will!

Tip: If you avoid purchasing wine or chocolates and pack your own picnic, this is a budget-friendly day trip!

Dogs: Absolutely on the NCR Trail. In fact, there's water and water bowls at Monkton. Not so much at the wineries!

Eats: Bring plenty of snacks and sustenance for hiking or biking along the NCR Trail. Frankly, I recommend packing a picnic or bringing your own bread and cheese to accompany the wine tastings.