If you're a landlubber like me, a day out on the water is a treat. And how better to start the Memorial Day weekend than by spending a day checking out Chesapeake Bay light houses.

The boat tour left out of the Knapps Narrows Marina at 10ish; Knapps Narrows separates Tilghman Island from the mainland of Maryland's Eastern Shore. Captain Mike, who runs the tours, is laid back and emphasized to everyone that this was a relaxing day; if we had to wait a few minutes for someone to show up, that would be fine -- we'd still see everything we wanted to see (and more, as it turned out). As it was, we only waited a couple minutes for the last couple to show up, but no one minded: the day was beautiful with a light breeze and 70 degree weather. We were on the M/V Sharps Island, enjoying the sights from the marina (there was a seagull dining on a crab that was amusing to watch).

On our way out to our first stop, we encountered sail boats participating in the Annapolis to Miles River Annual Sail Boat Race. The boats were catching the wind blowing right behind them, filling their sails. It was a beautiful sight and an amateur photographer's dream! 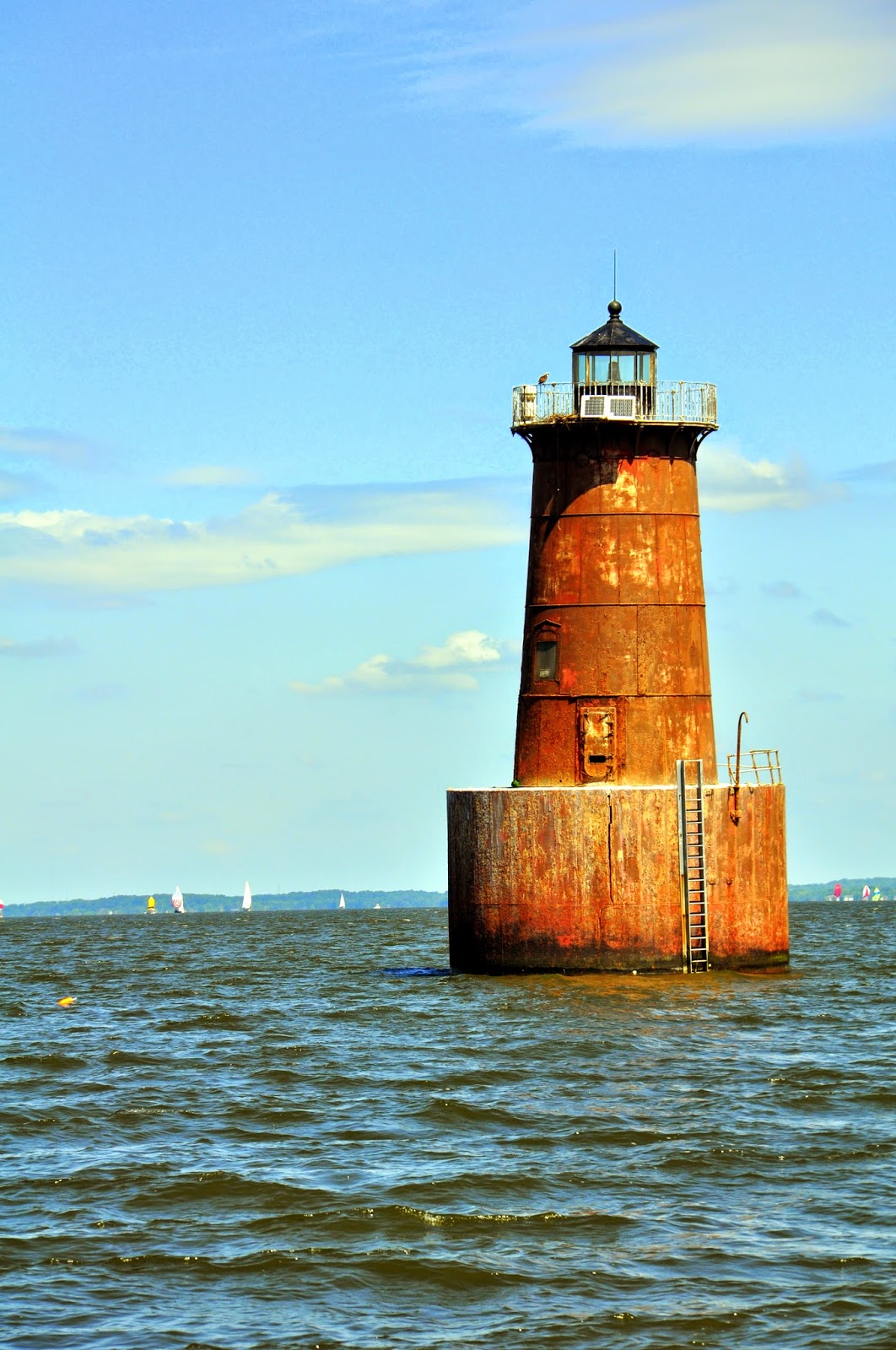 The first light house we headed to was Bloody Point Light House, located of the southern tip of Kent Island and marking the entrance to Eastern Bay. Though the lighthouse stands in about seven feet of water and warns mariners of shoals near Poplar Island, it is also close to one of the Bay’s deepest shipping channels. According to legend, the nearby point has been the scene of a number of violent events throughout history. In colonial days, English colonists lured a group of Native Americans to the area, and then butchered them. It is also rumored that a villainous French pirate was hanged at Bloody Point.

The light house was commissioned in October 1882. Almost from day one, the action of the tides caused the caisson to start leaning. Work was done in 1883 and 1885 to straighten and stabilize the light, and the light house was manned until a fire destroyed it in 1960; in 1961 the interior was cleaned out and the light automated. The fire and subsequent corrosion has caused widespread cracking of the plates. In addition, water has seeped between the steel cylinder and its concrete filling. Freezing of this seepage during the winter has caused some damage to the caisson. Only the cantilevered lantern deck, composed of cast iron triangle plates, remains in relatively good condition. Solar panels power the modern lens, which is still an active aid to navigation. The light house is privately owned. 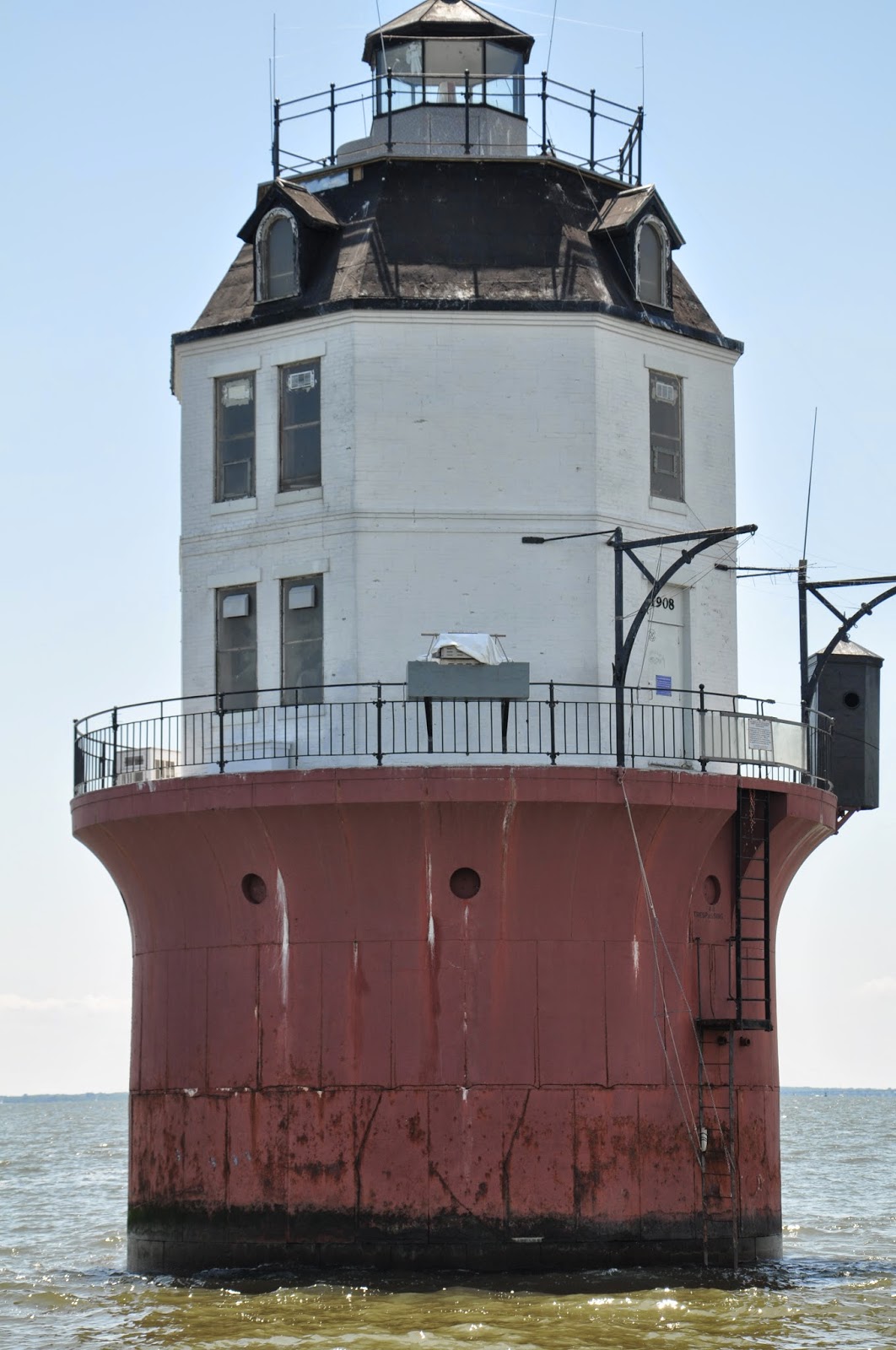 Our next destination was Baltimore Harbor Light, which guards the entrance to Baltimore Harbor. Almost at the same time we arrived at the light, we saw in the distance the SS John W Brown, one of the Liberty ships, making a cruise. What's so cool about seeing this ship is that the owners run the cruises only twice a year: on Memorial Day and Labor Day weekends. 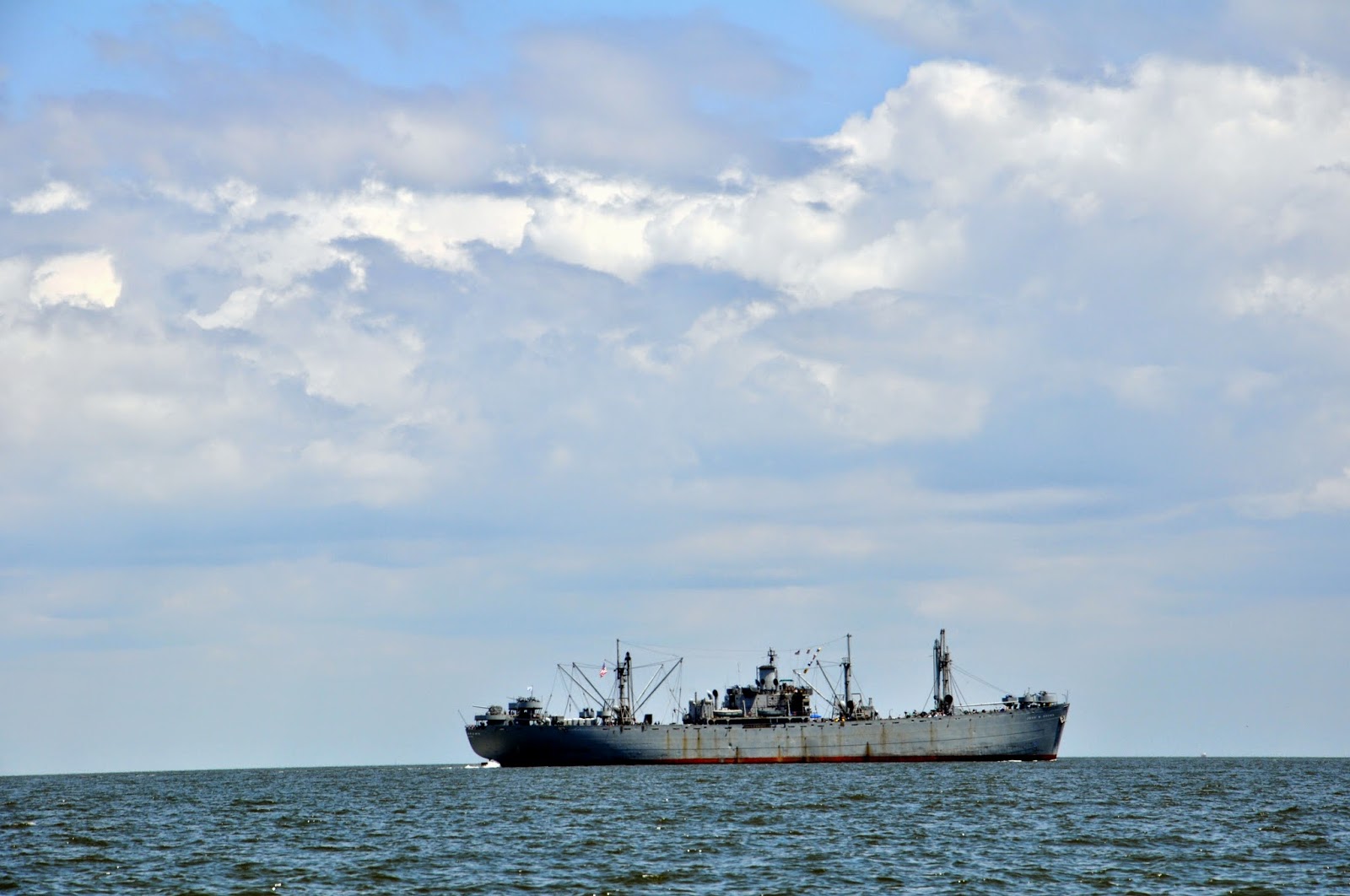 The cylindrical caisson foundation was built in 1904 at the mouth of the Magothy River. It was the last lighthouse built on the Chesapeake Bay. This is an unusual light house because of the unique experiment that took place there. In May 1964, the light was converted to run off power supplied by a small atomic fuel cell, making it the first atomic-powered lighthouse in the world. This experiment only lasted a year and the concept was not pursued further. Today, the lighthouse is privately owned. 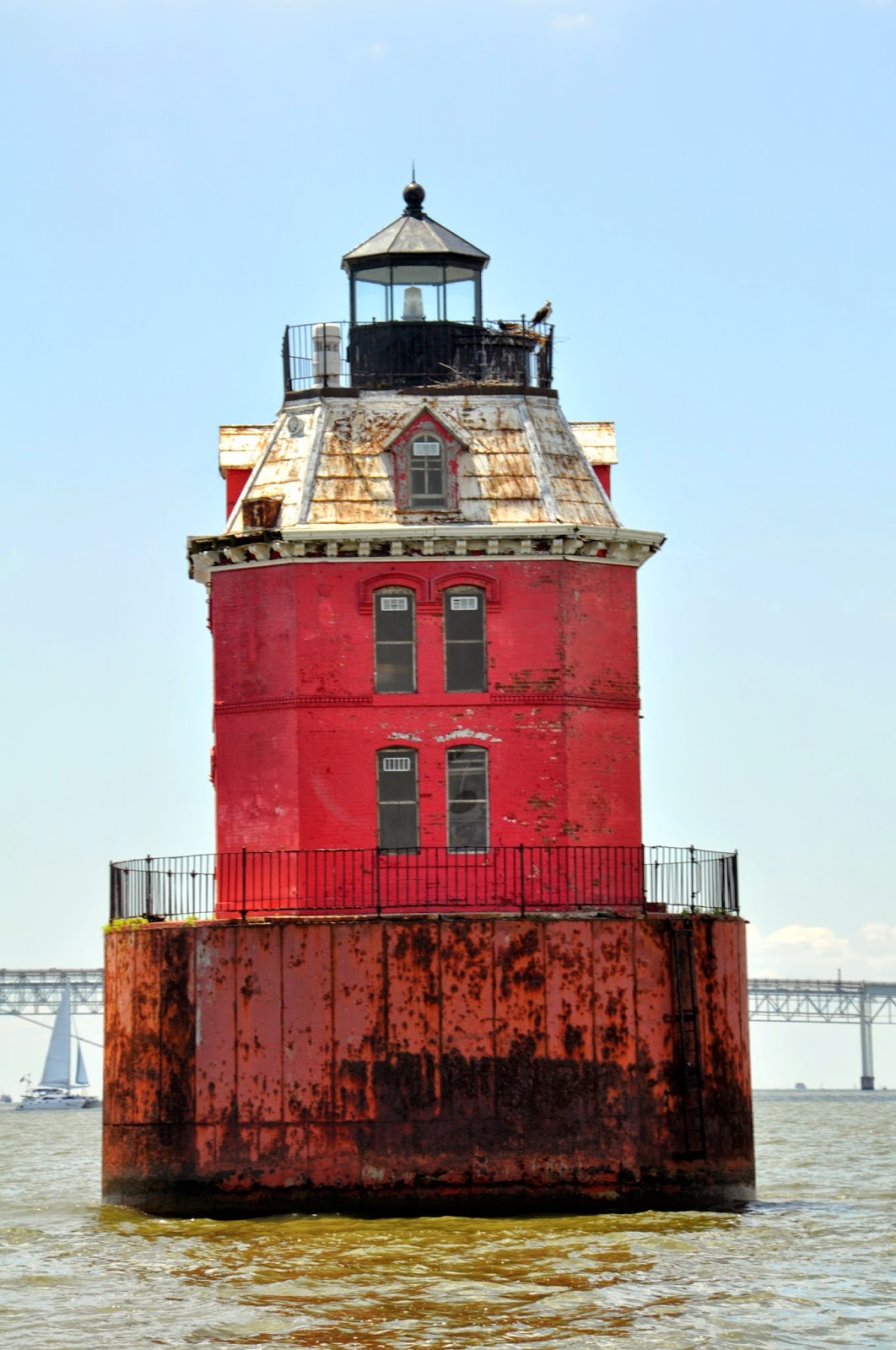 Next we circled the Sandy Point Light House located at the southern mouth of the Magothy River and clearly visible from the Bay Bridge. I know this one -- it's a familiar sight from the shore of Sandy Point State Park. It is a caisson light with an octagonal brick dwelling and tower. Originally it was supposed to be a screw-pile light. But problems with winter ice and the screwpiles had developed so additional funds were requested for a caisson. No more money was available so they compromised. They built a caisson foundation, sunk it, and then built a smaller less expensive brick tower on it. It was first lit on October of 1883.

Sadly, this light house's visibility may be its undoing. After automation in 1963, the light became subject to vandalism due to its prominence and its accessibility. The original lens was destroyed in 1979, apparently smashed with a baseball bat. Vandalism has continued over the years. In 2006 it was sold at auction to a private bidder, after an unsuccessful attempt to find a non-profit group to take responsibility for the light. The U.S. Coast Guard continues to maintain the navigation aids. The structure was added to the National Register of Historic Places as Sandy Point Shoal Light Station on December 2, 2002. 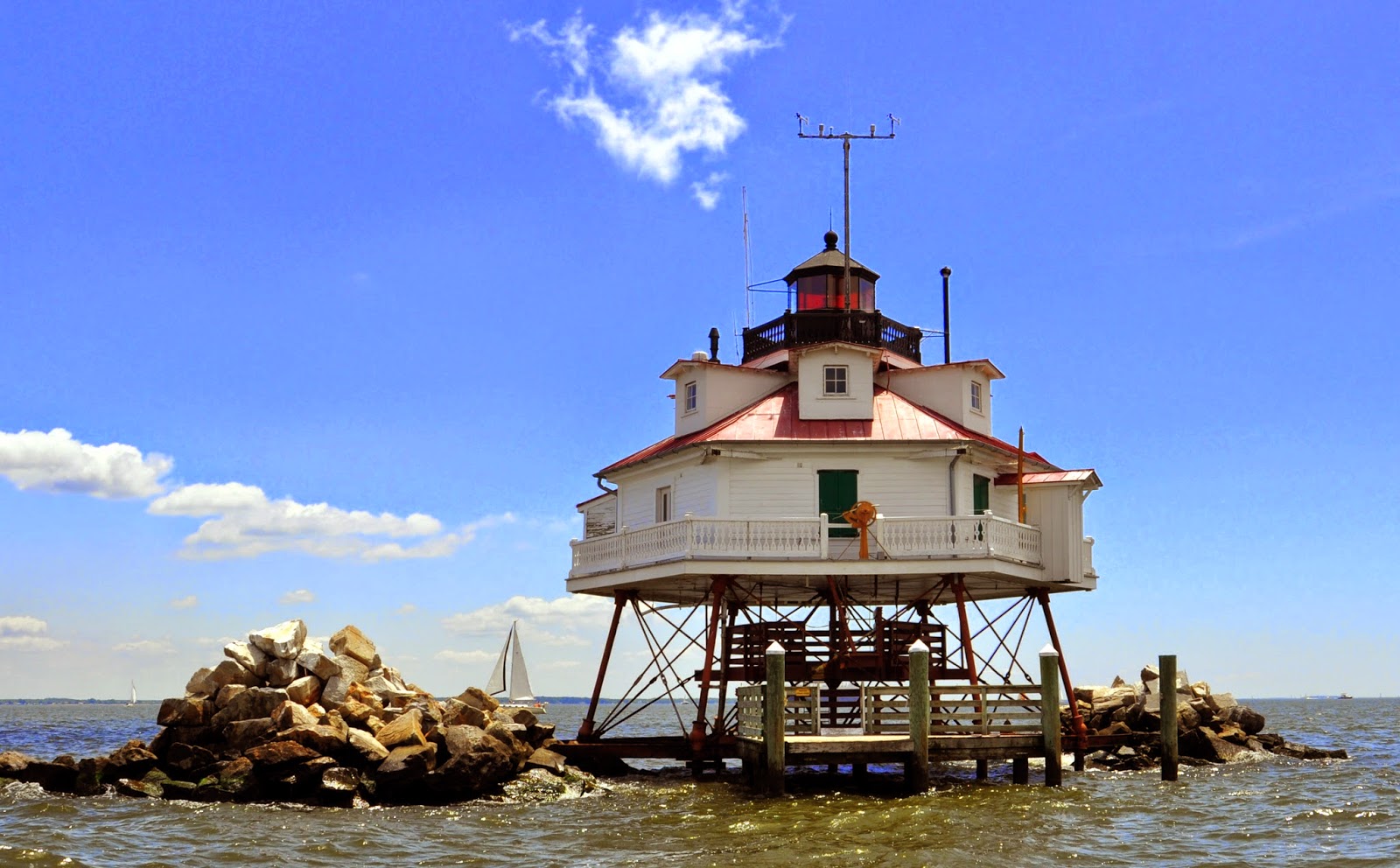 From there we went to the most photographed and probably the best recognized light house in Maryland: Thomas Point Shoal Light, owned by the City of Annapolis. It is also the best maintained. Located just north of the mouth of the South River, south of Annapolis. It is the only screw-pile type light on the Bay in it's original position.

Commissioned in November 1875, ice was a perpetual threat to screw-pile lights on the Chesapeake, and just two years after its commission, the original lens was destroyed when it toppled by shaking from ice floes. This lens was replaced, and the additional piles and riprap -- those piles of boulders and rocks on either side of the light house -- were placed around the foundation to protect it. The lighthouse was manned until 1986 and then it became the first lighthouse on the Bay to be fully automated. 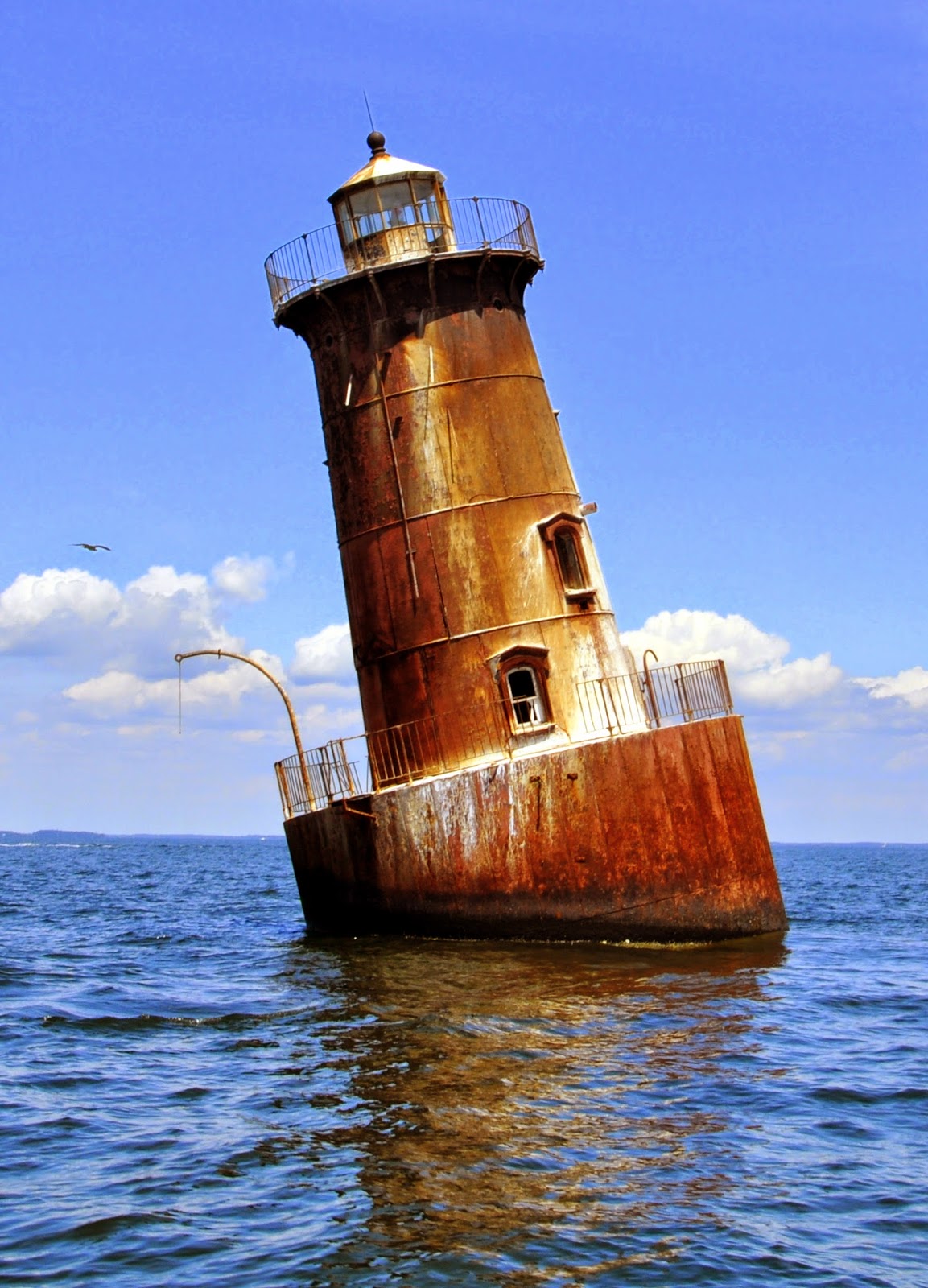 Finally, we went to the Bay's answer to Italy's Leaning Tower of Pisa, to a light house that marks the location of an island -- Sharps Island -- that quietly disappeared years ago. It also is one of the most distinctive light houses -- as it "lists significantly starboard," as the A/V Sharps Island first mate noted ironically. The structure is picturesque, but in poor condition, and although still a functioning light, it also serves as a rather roomy bird house for a pair of ospreys, like several other of the light houses we saw.

In the early 1800s, Sharps Island was a farming and fishing community and the island had schools, a post office and a popular resort hotel, where vacationers from Baltimore and other locations would arrive by boat to while away the lazy summer days far away from the city heat. Between 1850 and 1900, the island lost 80 percent of its land mass, and by 1960 it had been reduced to a shoal. Today it is entirely underwater. Rising ocean water levels and unrelenting erosion caused this once thriving community to disappear completely -- a fate that could await other islands in the Chesapeake Bay. For more information on the Chesapeake Bay's vanishing islands (Sharps Island was not the first, nor will it be the last), check out this National Geographic Society article.

Located off the entrance to the Choptank River, approximately 4 miles from the the southern most tip of Tilghman Island, the light house was first lit in February 1882. The previous light on this spot was a screw pile light completed in 1865. It lasted until February 10, 1881 when, during a winter thaw, the wind-driven ice swept the building from the screw pile and it floated 5 miles down the bay, with the keeper inside. It ran aground and the keeper escaped, extremely thankful to have survived his ordeal. The current tower includes an integral dwelling and was manned until 1938 when the U.S. Coast Guard automated the light. In the winter of 1976-1977, severe ice flows tilted the tower 15 degrees.

Even if light houses aren't your obsession, it's a great day out on the Bay, and you might learn a little Maryland history. Mostly, you enjoy the Bay's scenery, and the wind and the sun and the water. The boat ride can be exhilarating! Getting there: Follow Route 33 from Saint Michael's to Tilghman Island. The turn off into the parking lot to Knapps Narrows Marina is on the right, just before the draw bridge over to Tilghman Island. When I GPS'd the address, my GPS tried to take me to Laurel, MD -- several hours away from where I actually wanted to be.

Hours: Check out the tour schedule on Chesapeake Lights website. There are several different tour options, including a "sunset tour" that entices the photographer in me.

Eats: Bring your own snacks and water. And a hat, sunscreen, etc. 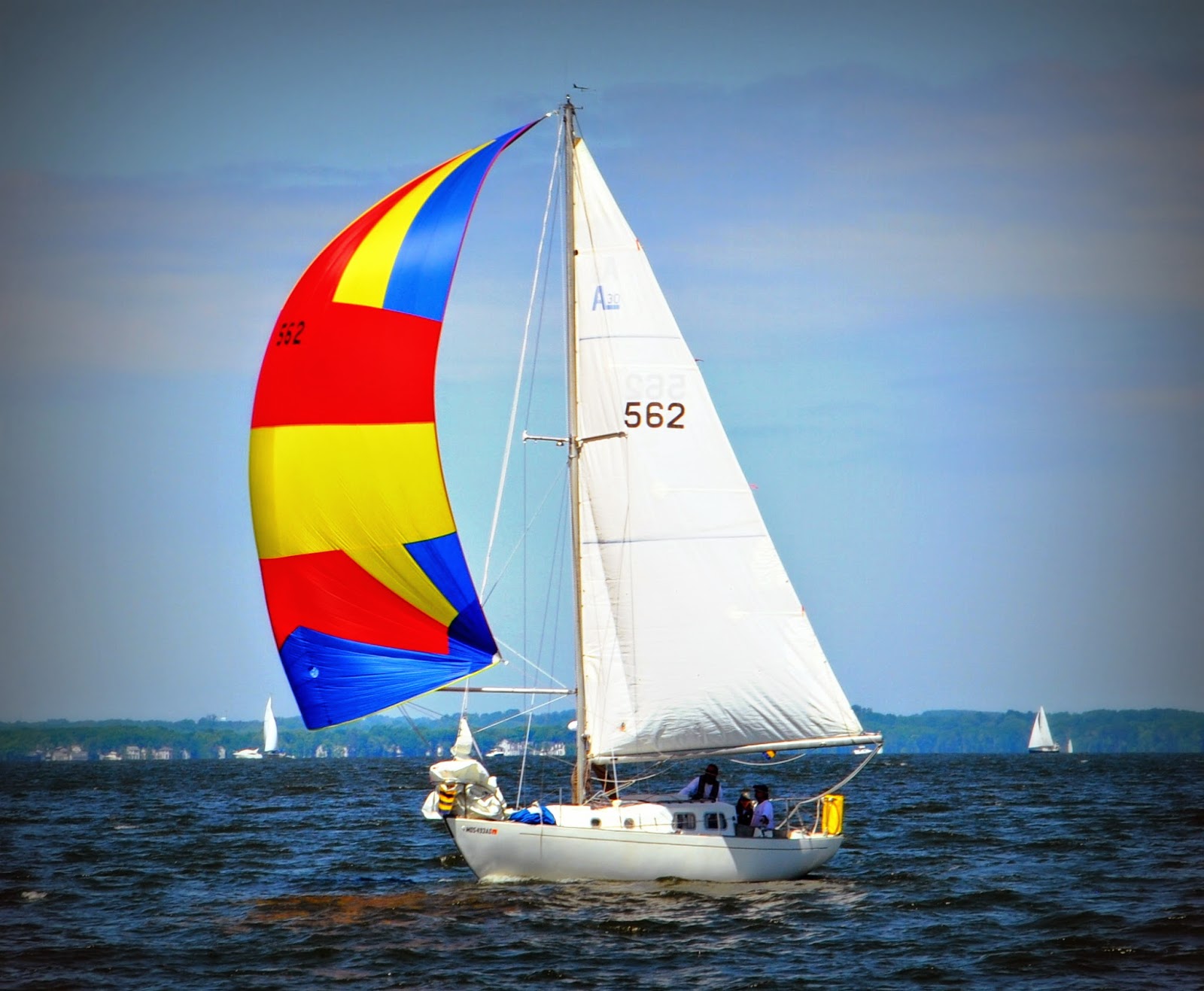