Gail writes about a recent day trip she took with her retirement community:

The day was one of those rare ones this past March that was warm and pleasant for our day at Monticello, in Charlottesville, VA. We were on a retirement community trip - a "Mystery Trip that we'’d signed on for not knowing where we would be going! Once we headed down Rt 15 south we were guessing either Fredericksburg or Monticello and once we passed Rt. 17 into Fredericksburg, we knew where we were headed although we did pass Montpelier (another very interesting day!). 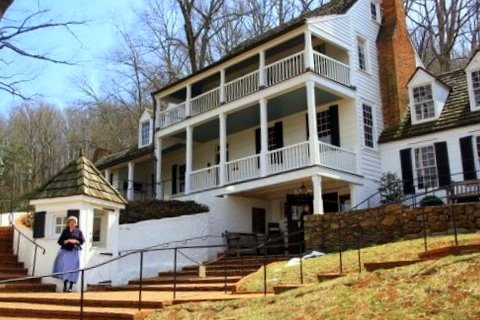 Our first stop was Mitchie Tavern, ca 1784, for lunch, although we were later than we'd expected -- and very hungry -- by a complete stop of traffic on the way down from Frederick to clear an accident shortly after Rt 17. But our good spirits returned as we went through the buffet at the Ordinary at the Tavern, a lovely selection of good food. We were offered chicken, pulled pork, biscuits and corn bread, cole slaw, stewed tomatoes, beets, green beans, a delicious vegetable soup, and much more. Everything was very good and the waitresses helped us as needed with our trays as there were a few steps up to the dining room and we were an elderly bunch, so gladly accepted the help! The staff was very professional, helpful, and friendly.

While eating, the girls came by asking if we wanted more of anything. Our drinks were refilled and then dessert was offered but most of us had had our fill. The cost of the buffet was almost $18 each plus beverage. The venue was rustic and the service was on pewter-like metal to add an air of authenticity. Our group, without a reservation, was seated at a long table all together, but other diners were seated at smaller tables, and there was another room with groups. It was a pleasant meal finished with a trip to one of several gift shops available, the smaller one in the building, and another a short walk away. A toy shop was also an attraction.

Our mini bus then brought us up to Monticello, Jefferson's mountaintop plantation about a mile away, which was designed, built, and redone by him from 1769 to 1808, and was a working plantation. Monticello was home not only to the Jefferson family, but to workers, black and white, enslaved and free.

Jefferson kept copious records of weather, crops, and even had a machine that wrote a copy of any correspondence as he wrote (polygraph copying machine.) So records of life at that time are abundant and since the contents of the property were sold off after Jefferson’s death to pay taxes and debts, everything was dispersed until Monticello was bought back for preservation in 1923 by the Thomas Jefferson Foundation. Now about 60% of furnishings may be authentic. 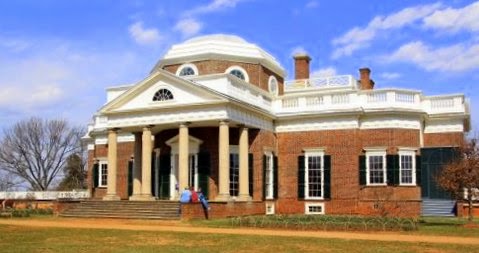 Monticello went through some interesting times after Jefferson's death. Because he died more than $107,000 in debt, his daughter Martha Jefferson Randolph and her son and financial manager, Thomas Jefferson Randolph, found it necessary first to sell nearly all of the contents of Monticello and then to sell the plantation itself. In 1827, the furniture, animals, farm equipment, and slaves were offered at an executor's sale. In 1831, James T. Barclay, a local apothecary, purchased the home and 552 acres for $4,500, less the value of his own home. Unsuccessful in his attempts to cultivate silk worms there, he offered Monticello for sale just two years later. In 1834, Uriah P. Levy, a naval officer who admired Jefferson's views on religious tolerance, purchased the house. Levy died in 1862 and bequeathed Monticello to the government if certain conditions were met.

During the Civil War, the Confederacy seized and sold the property. After the war, the government declined the terms of Levy's request, and Levy's heirs contested the ownership. Not until years of litigation had passed did Jefferson Monroe Levy, Uriah P. Levy's nephew, take possession in 1879. Both uncle and nephew strove to preserve Monticello as a memorial to Jefferson. In 1923, Jefferson Monroe Levy sold Monticello to the newly created Thomas Jefferson Foundation, which owns Monticello today.

The house tour, led by knowledgeable guides, toured a variety of rooms and pointed out many of Jefferson'’s inventions. He was a man of many talents and loved architecture and inventions to make life easier. Although his first library was donated to and began the Library of Congress, he learned he couldn'’t live without books and embarked on collecting another library, gathering 1600 volumes before his death, which added greatly to his debt. Survivors at that time by law had to pay off those debts and it took several generations to settle those of Jefferson, even after the sale of the house and property….

Tip #1: If you want to see more than the main floor of Monticello then splurge and purchase the "behind the scenes" tour pass, which takes you behind the scenes: through the first floor of Monticello; to bedrooms once occupied by members of the Jefferson family on the second floor; to the iconic Dome Room on the third floor; and to the new, interactive "Crossroads" exhibition under the house. You'll see unique interior architectural features, learn about ongoing historic restoration efforts, and gain insight into life at Monticello.

Tip #2: For those who want to make a weekend in that area, a stop at Orange, VA and a visit at Montpelier would provide activity for a second day. In Orange there is a Holiday Inn that is quite nice for those not interested in B&B’s (offered at Mitchie Tavern). Appomattox Courthouse is not too much further south. Driving along Rt 15 is quite pleasant and worthwhile and is listed as "a Journey Through Hallowed Ground Byway”," (Civil War sites) from Frederick, MD, well into Virginia.

Getting there: GPS it! 931 Thomas Jefferson Parkway, Charlottesville, VA 22902

Hours: Monticello is open every day of the year, including Sundays, except Christmas. To see the hours for a particular day, visit the website.

Dogs: No. But from the Baltimore/Frederick/Washington DC area, it's a long day for pooch to be at home alone, so make sure there's someone to walk him in case you get home late!

Have you daytripped somewhere interesting? I'd love to hear what you're doing! Email [email protected] if you're interested in being a guest-blogger!
Posted by Jody Arneson at 12:59 PM