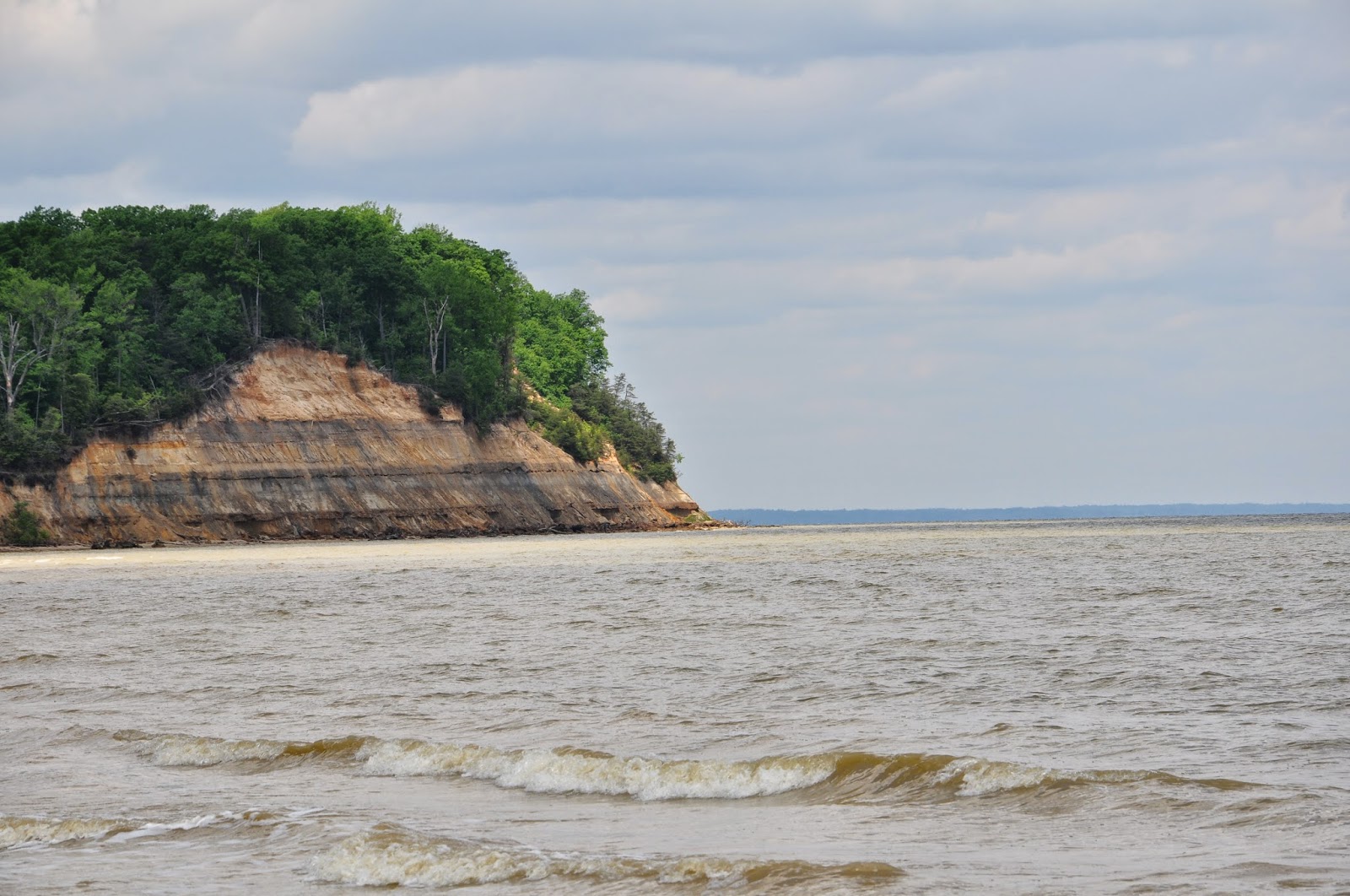 It can be really fun to go fossil hunting -- 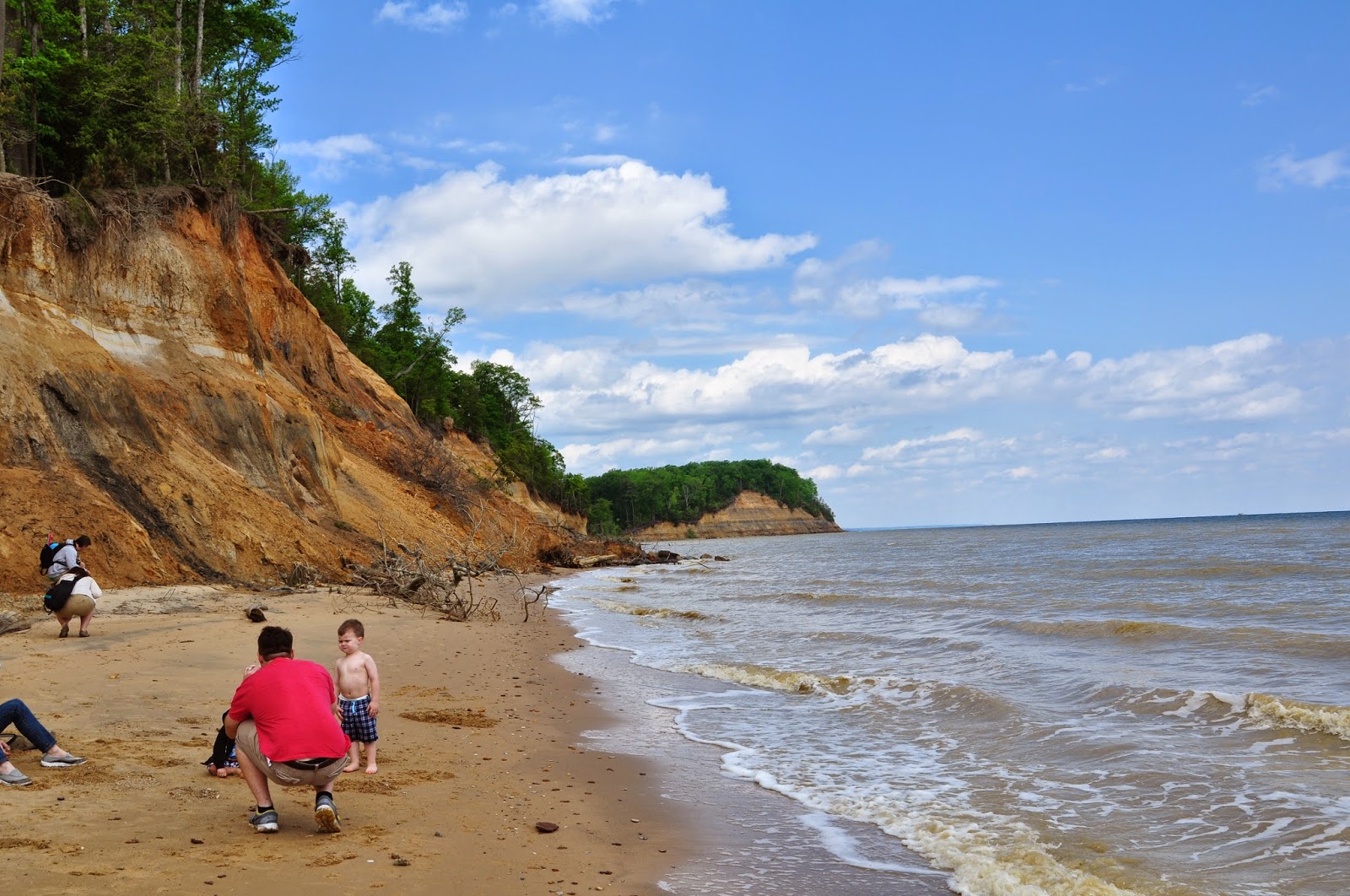 The main feature of the park is the huge Miocene cliffs that dominate the waterfront. The cliffs and the shores below contain more than 600 species of fossils from the Miocene epoch, more than ten million years ago. These cliffs rise over the Bay over 100 feet and are slowly eroding at the rate of almost 3 feet per year, ensuring a constant supply of "new" fossils to discover. They were created over 10 million years ago when the Chesapeake Bay and most of southern Maryland were still a shallow sea. As the waters receded, the sea floor became exposed and what was to become fossils gathered at this point. The cliffs are the most extensive assemblage of Miocene fossils in the eastern United States. 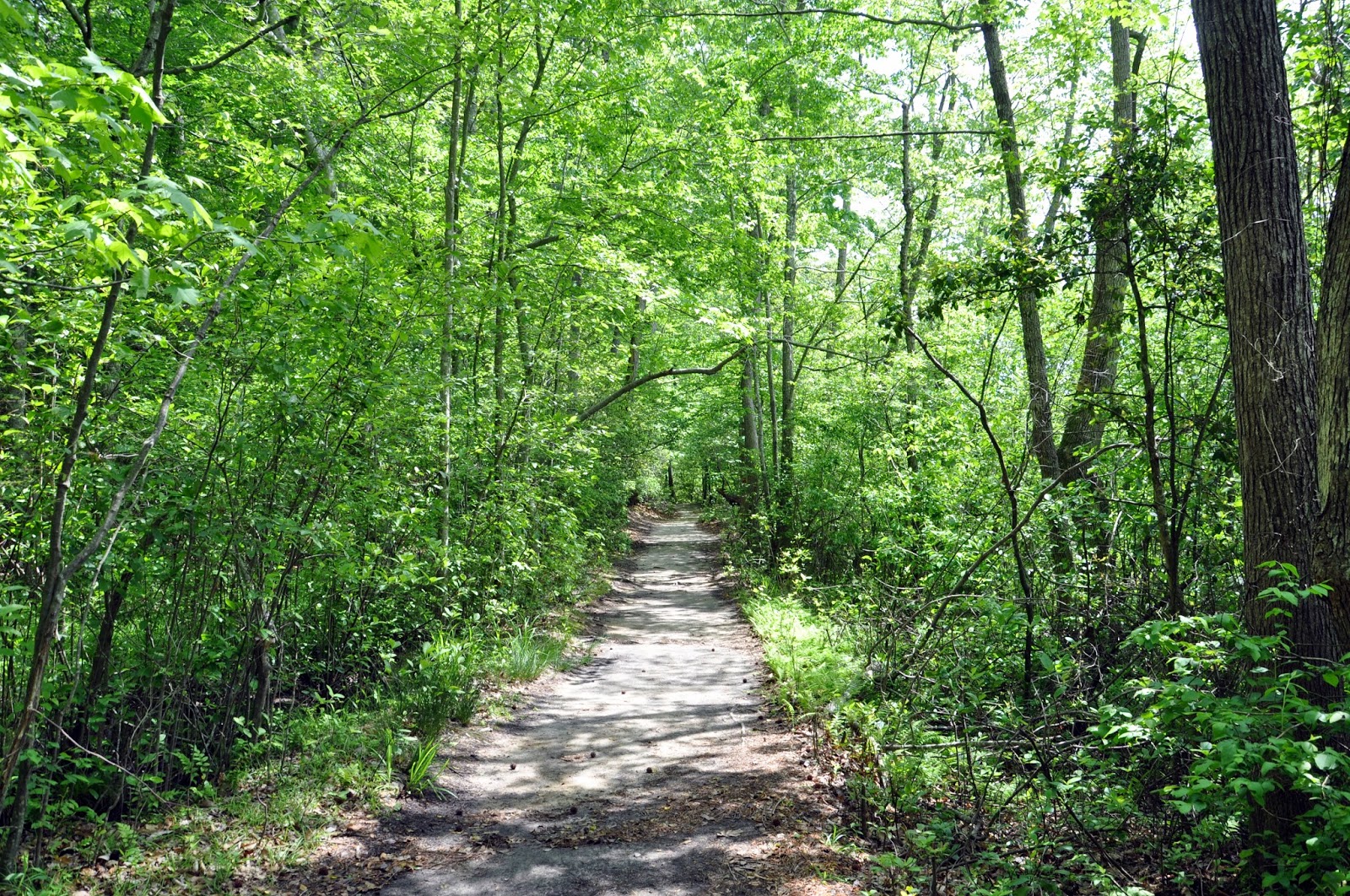 More than 1,000 acres of this park are designated as wildlands; the park is allowing the landscape to return to its more natural state.

The beach is littered with fossils that have fallen out of the cliffs and washed ashore. We noticed that other visitors had buckets, sieves, and rakes to help them hunt for sharks teeth and fossilized shells. In fact, several different groups, from families to groups of friends, and several couples of all ages were there with some very serious equipment! We felt under prepared, having brought only a couple of plastic bags to carry out our findings. 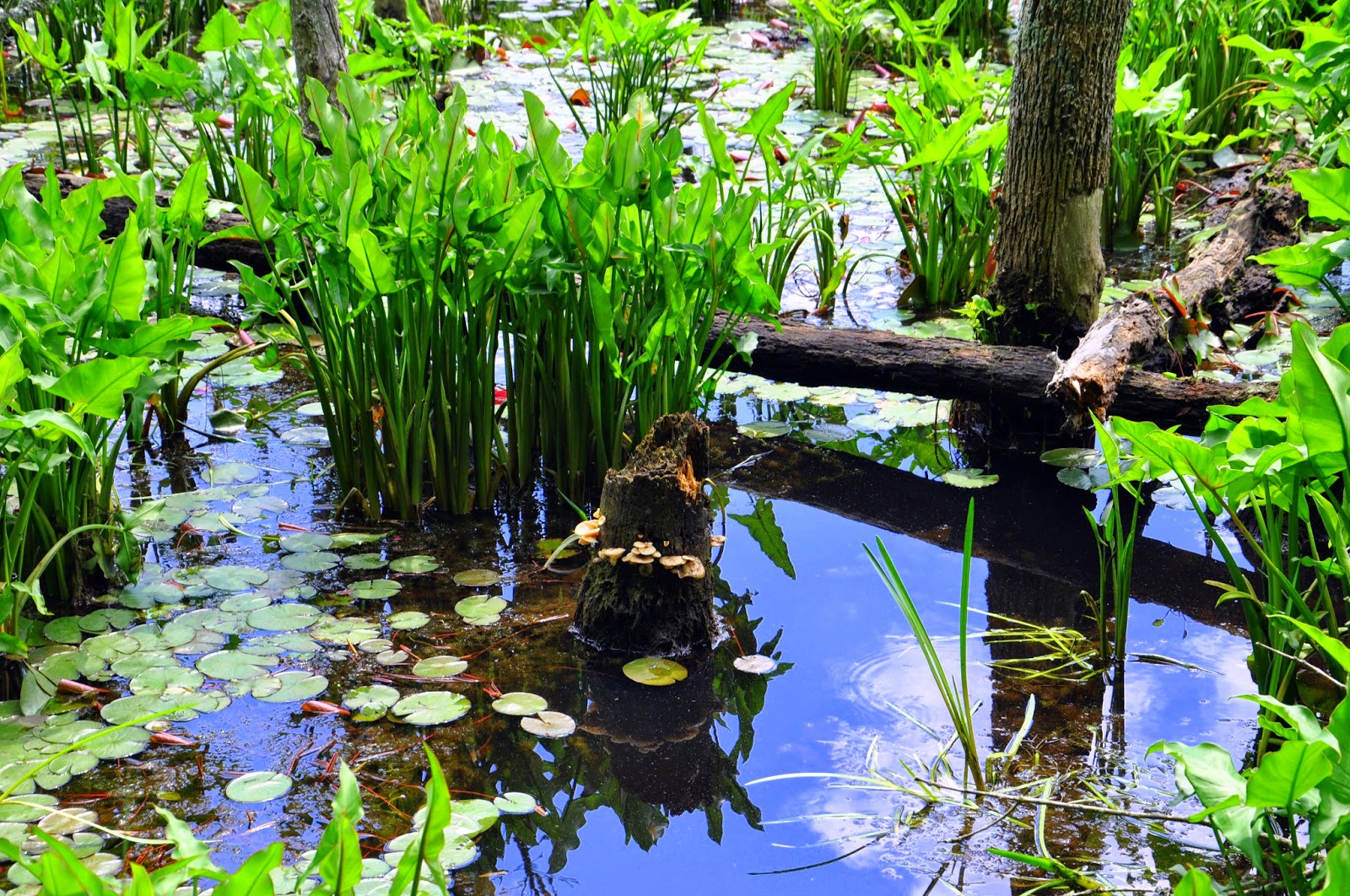 If you follow the red blazed trail to the cliffs, it is just about 1.8 miles out to the water, for a solid 3.6 mile hike there and back. The hike itself is lovely. The trail, which is mostly dirt with some boardwalk (in good shape) winds mostly through the woods and is largely flat, although there are a couple of small, easily surmounted hills. Because we went the day after 2 to 4 inches of rain had fallen on Maryland, there was a lot of mud on the trail, so if it's rained recently, wear footwear that will protect your feet or that you don't mind getting wet and muddy. 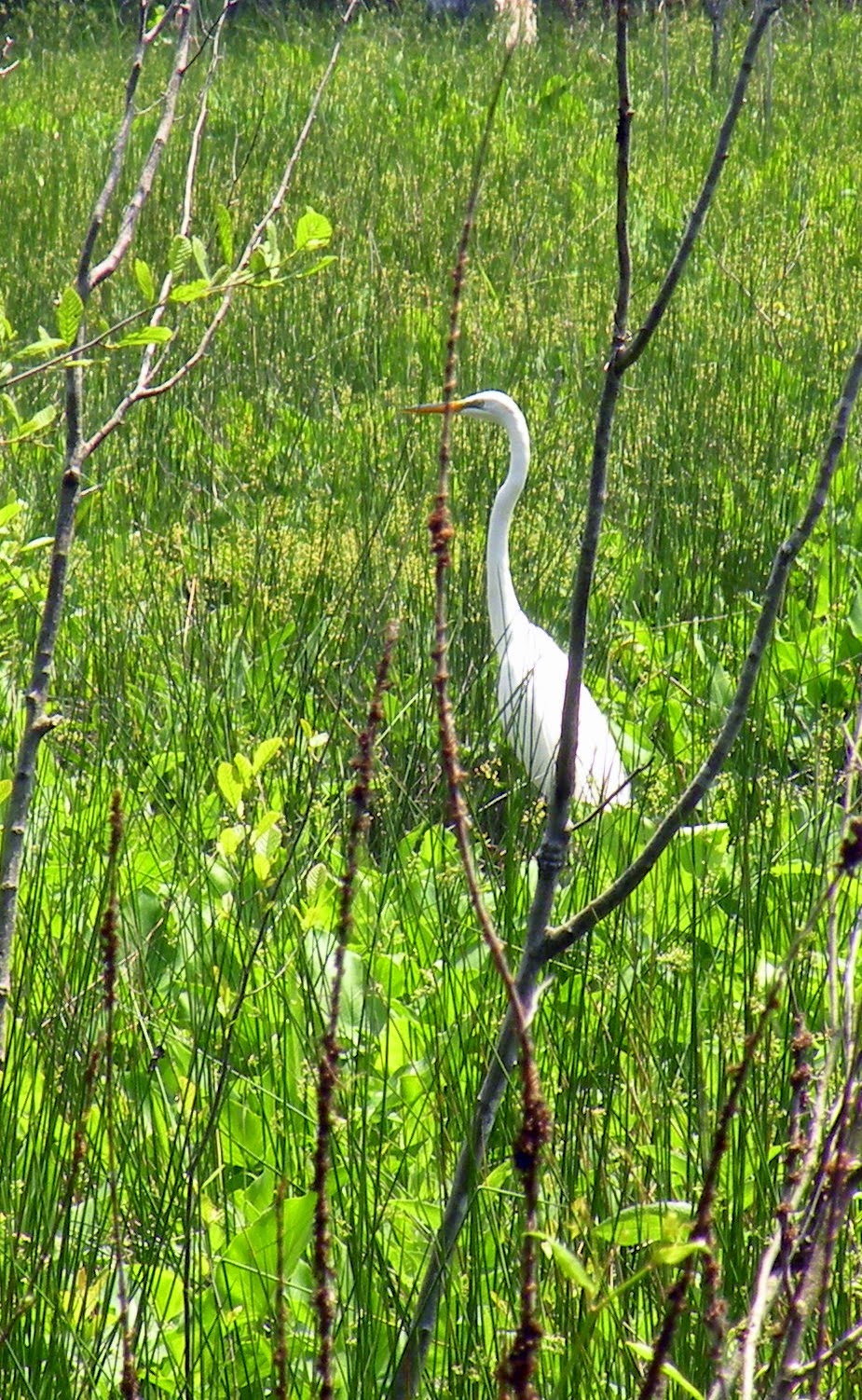 After following and observing a creek develop into wetland, the path all of a sudden opens to the Bay. Don't rush through the trail because the woodlands and the babbling brook that runs along it for much of the way are simply lovely, and deserve as much of your attention as the fossils at the end. When the trail changes and opens into the wetlands, frogs croaking replaced bird song as the dominant sound. Go slowly, because there are some lovely birds to be observed there, including the white egret I was lucky enough to photograph. While hiking, keep alert for the unexpected things -- the lone Siberian iris in bloom along the trail, or the black snake sunning itself on the path.

While the walk to the beach is a bit longer than some might expect, it is well worth it. I'd originally intended on only stopping on the beach to search for sharks teeth and fossils for 15 minutes, but we had a lot of fun with that and we were there well over an hour -- not just looking for the fossils but chatting with the other folks who were there. 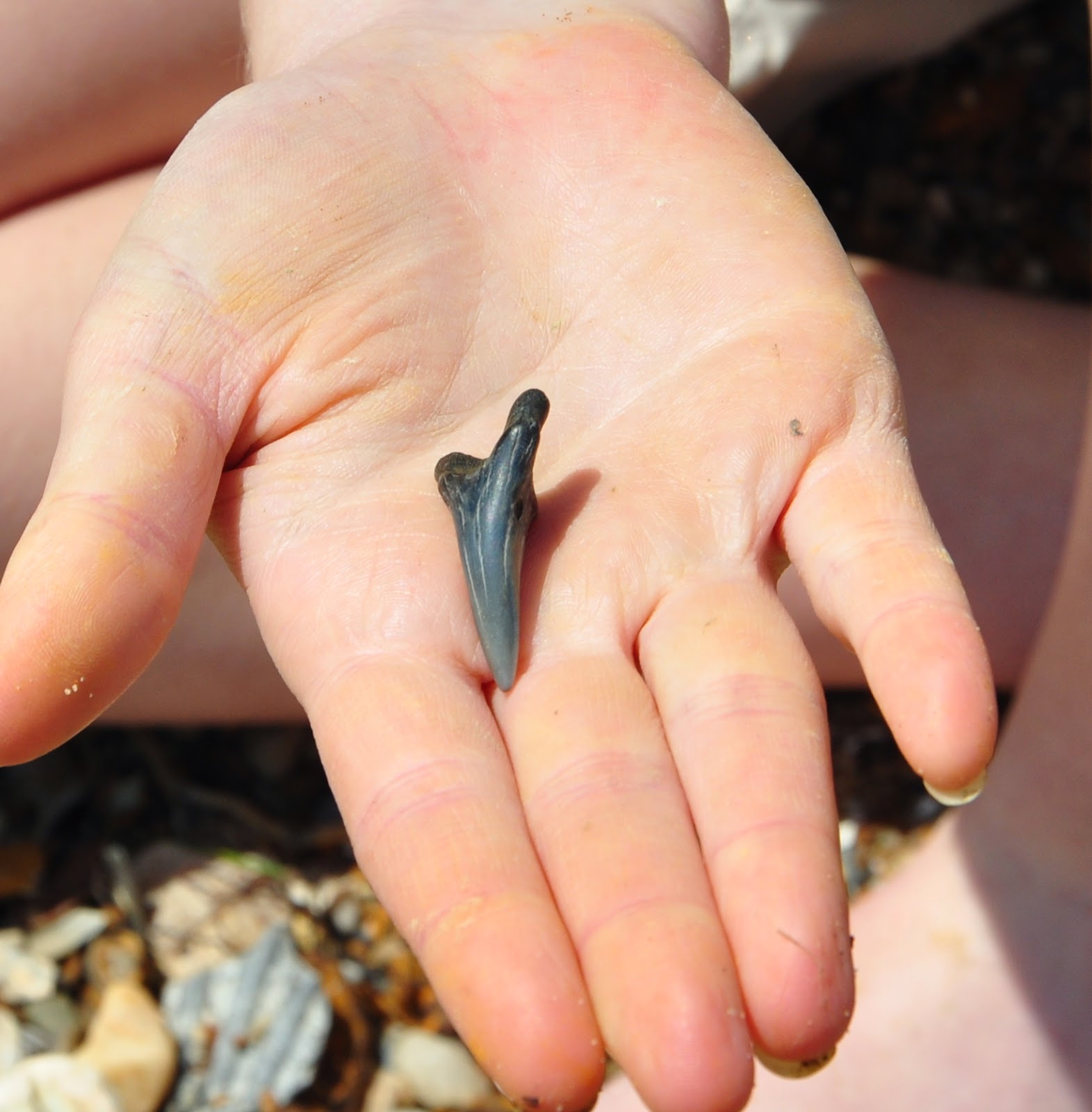 So what did we find? We found a very tiny shark's tooth, a huge fossilized barnacle, a very cool looking curled stone that immediately had me imagining that it was the claw from some ancient crocodile roaming the vast seas... when we talked with the park ranger who was
on the beach, she informed us that the claw-like stone was "bog iron." ... sigh. But we also found several very interesting rocks with shell imprints and a "matrix fossil" with layers of fossilized shells and such. Although we didn't find anything uber exciting, we felt very satisfied with our finds, and overall, had a great time going beach combing! 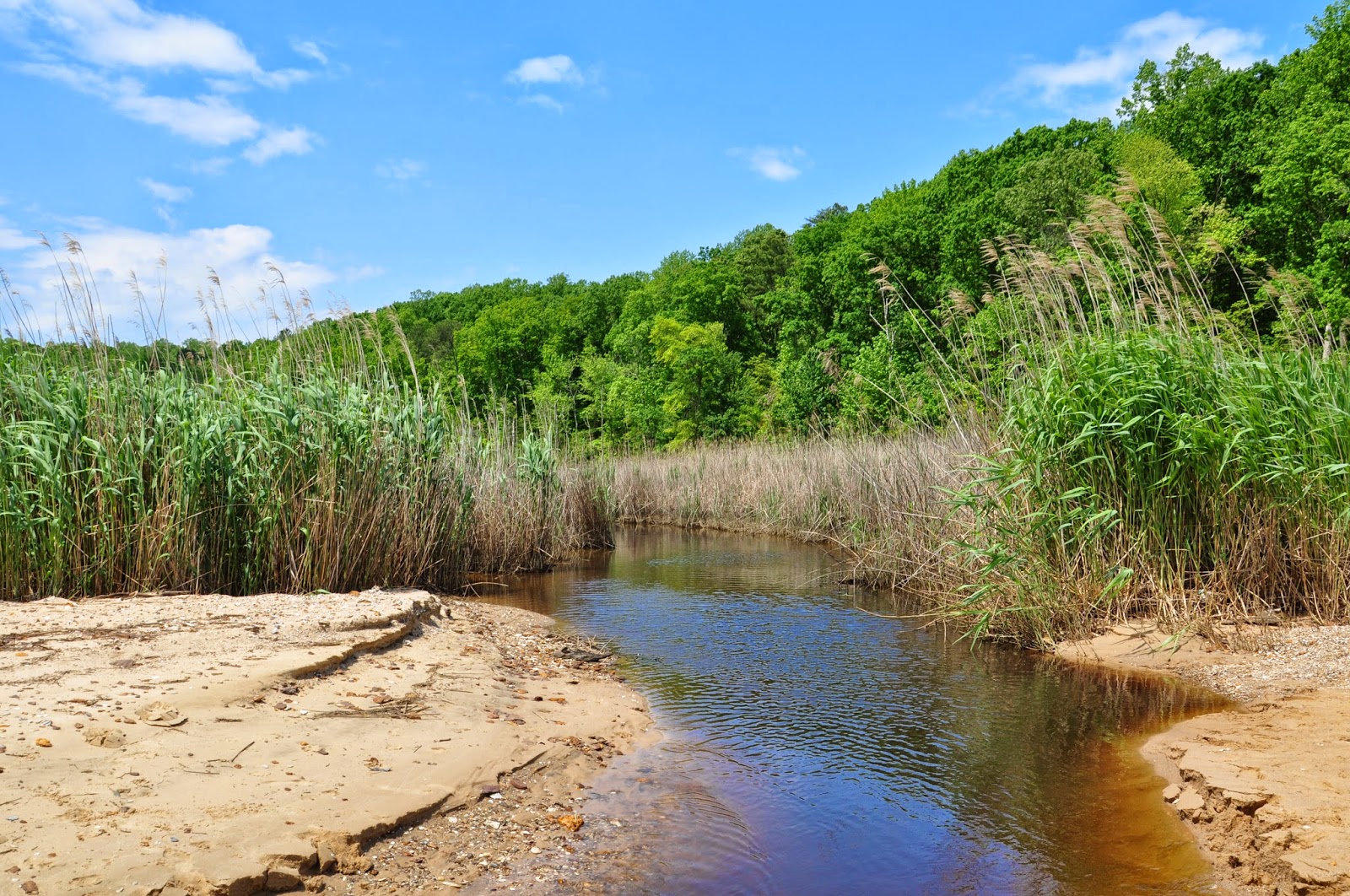 Right around the corner from the state park is the Cove Point Lighthouse. Over the protests of my offspring, I decided to check it out. Cove Point Lighthouse is known for being the oldest continuously operating lighthouse on the Chesapeake Bay; to this day, it remains an active aid to navigation. 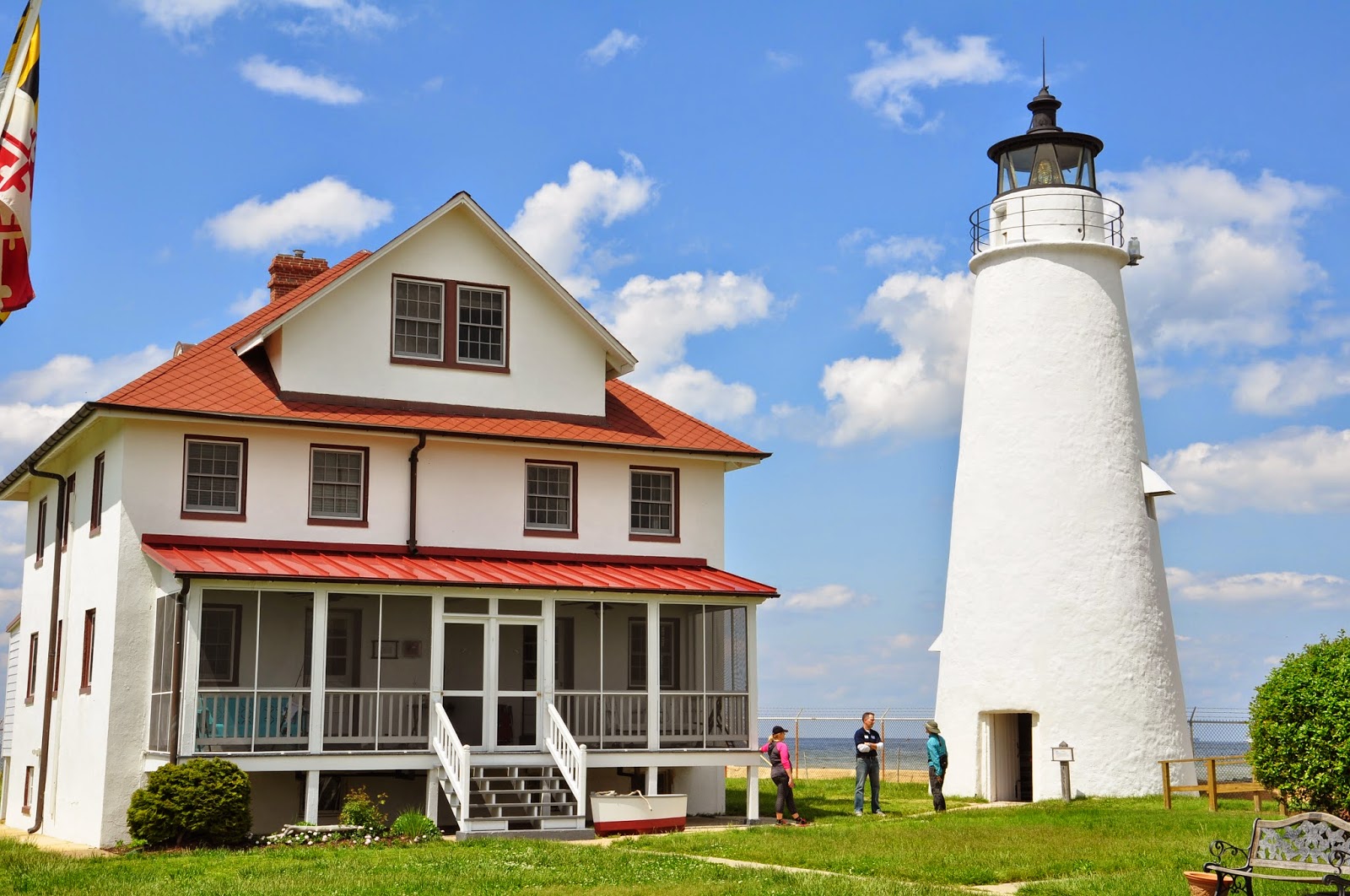 This light was built in 1828 by John Donahoo, who erected a brick conical tower along the plan he had used at several other sites in the Bay. The keeper's house was also built that year.

The keeper's house was enlarged in 1881 when it was converted to a duplex with housing for two keepers and their families. and again in 1925 when inside kitchens were installed. In 1950 a separate small house was built as home to a third keeper and his family.

It was added to the National Register of Historic Places in 1973 as Cove Point Lighthouse. The keepers remained until 1986 when the light was finally automated. The light was in good condition, with much equipment remaining from prior years, when it was turned over to Calvert County in 2000. Since then it has been administered by the Calvert Marine Museum, which allows access to the light and grounds in the summer months.

Dogs: Yes for the state park, no for the light house.