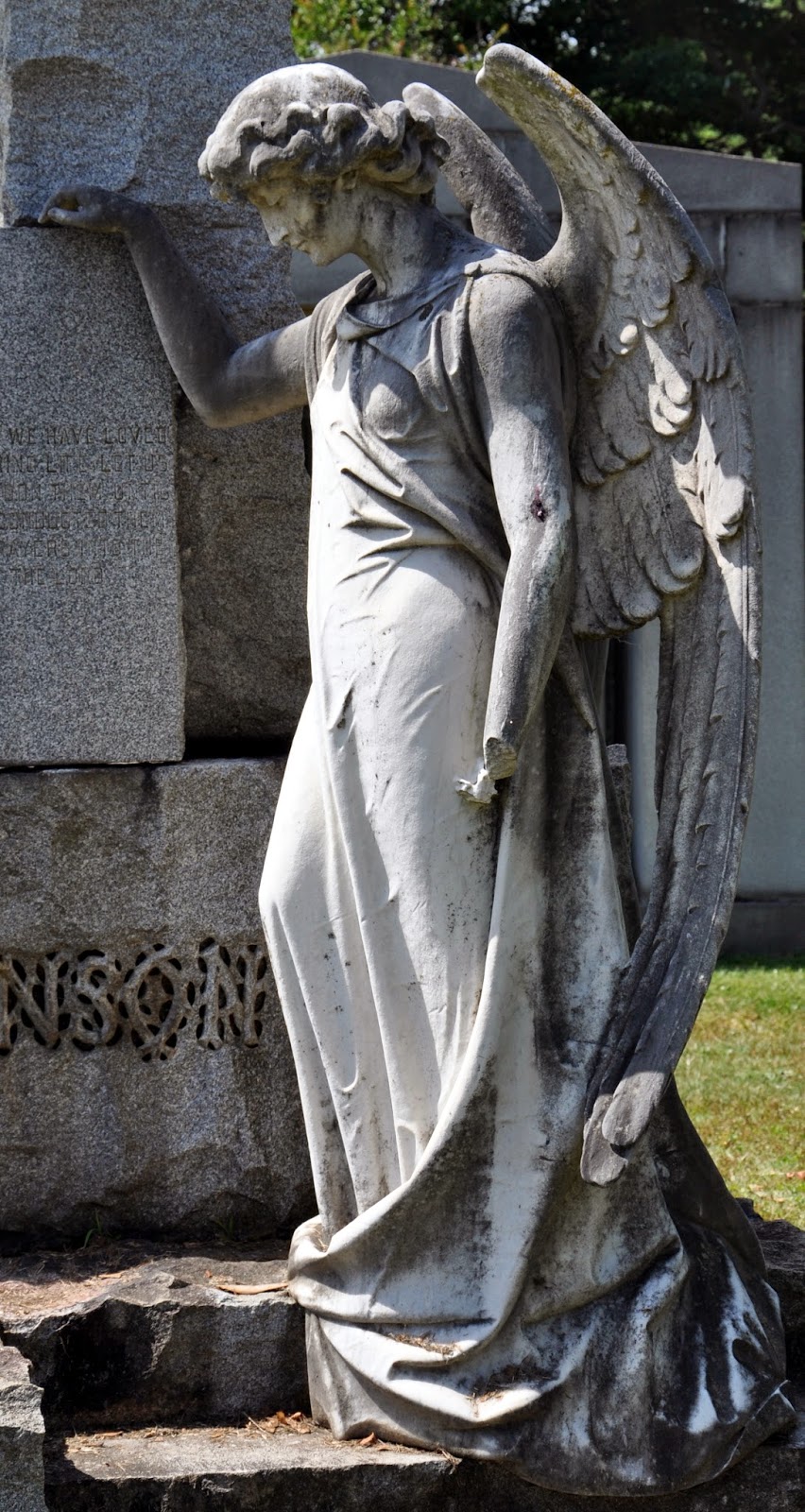 My husband and I recently went "tombstone touristing" at Hollywood Cemetery in Richmond, VA. Hollywood Cemetery is a classic example of the Victorian notion of creating park-like cemeteries, where families could go spend the afternoon or picnic in a picturesque and natural setting, contemplating nature's beauty amidst reminders of life's certain ending.

Hollywood Cemetery is definitely a destination cemetery for sight-seers, even if you are not into tombstones. History, art, and landscape come together at Hollywood, which is perched on bluffs high above Richmond and the James River. So far, of the several historical cemeteries I've been to -- it's the loveliest. 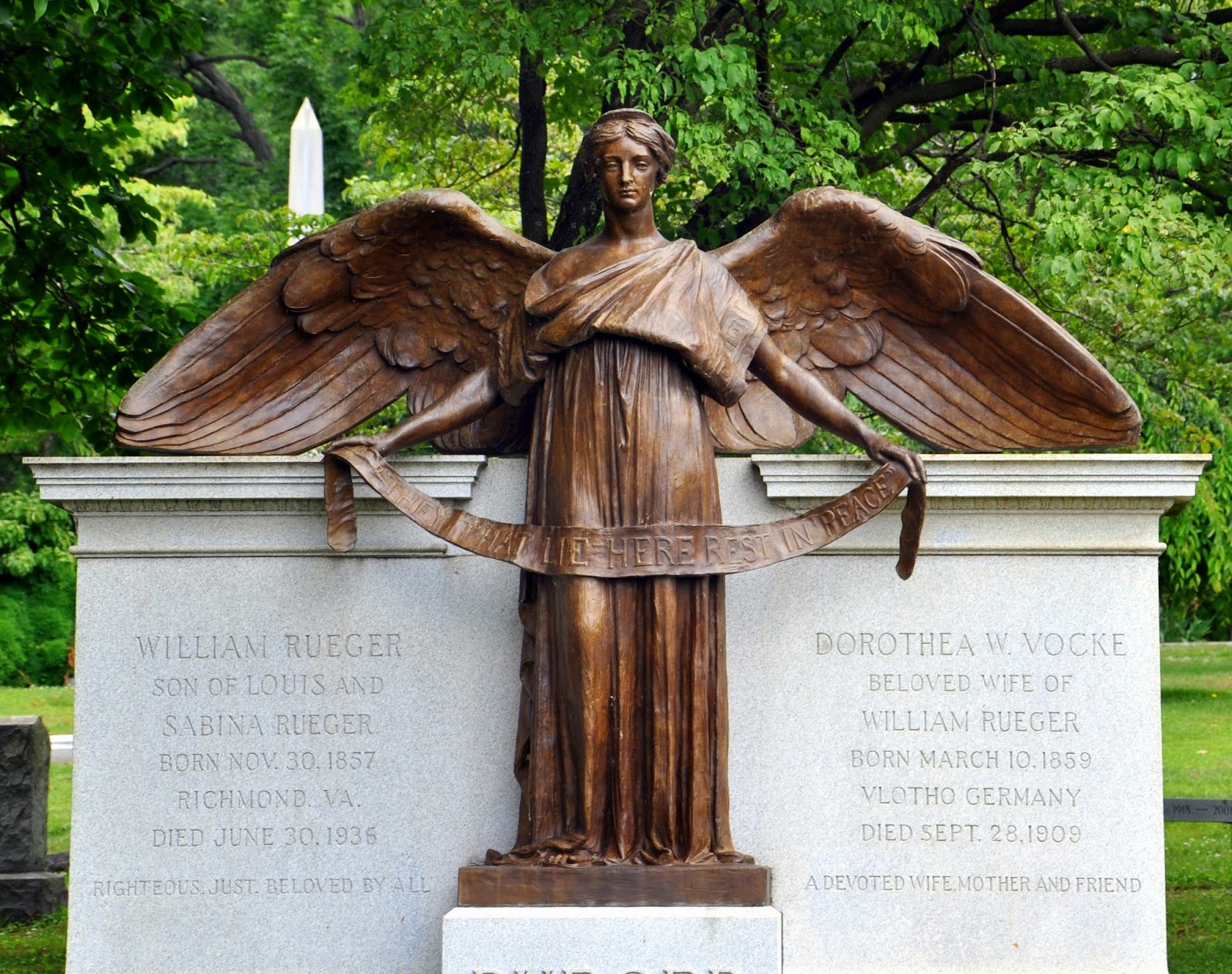 For history lovers, there are numerous graves of the rich and famous, including the fifth and tenth U.S. presidents. Civil War enthusiasts will find a virtual who's who of Confederate generals, including J.E.B. Stuart and George Pickett, as well as the grave of the president of the Confederate States of America, Jefferson Davis. There are, in addition, several famous authors and other notables. Beyond the famous and the rich, though, there are some very beautiful examples of grave art that make the cemetery worth visiting.

I'm what's known as a taphophile, in that I'm intrigued by the statues and art on grave markers, particularly from the Victorian era, although I prefer the term tombstone tourist -- it doesn't sound so much like a disease. Victorian Americans were taphophiles, too -- they viewed these cemetery gardens as destinations, a place to spend a pleasant afternoon, even if they didn't have loved ones buried there. Hollywood, with its landscaping and winding lanes, hills, and hollows, is a classic example of a Victorian cemetery, which is what its designer had hoped it would be. In fact, the man who designed it, Philadelphia architect John Notman, wrote that he wished the cemetery to be "original in every thing, as it had a distinctive and superior character of ground, which with the splendid panoramic views from it of the city and the river, makes it equal to the best in the country." 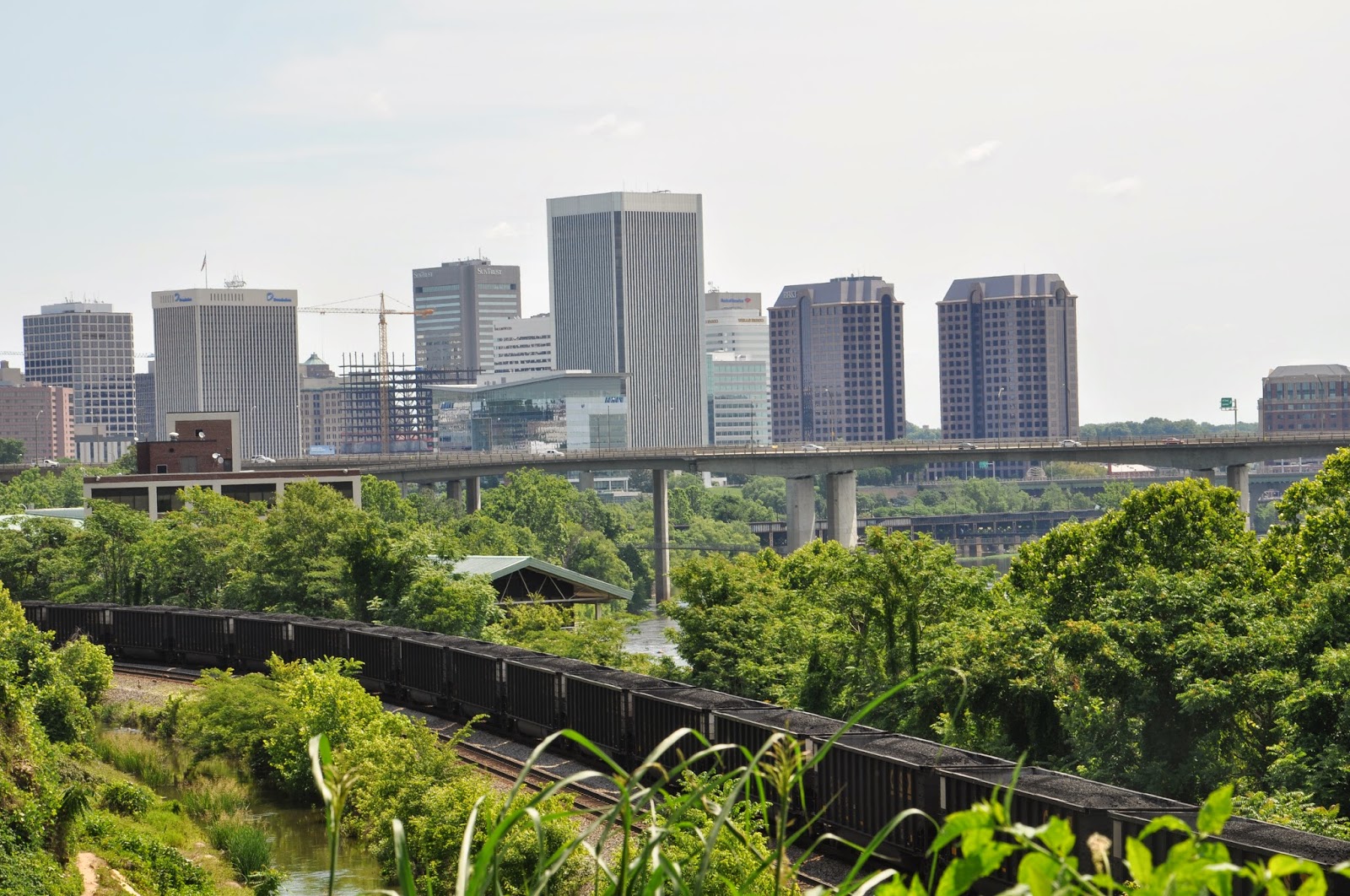 The heyday of mortuary art lasted between 1830 and 1930, and it was the landscaped cemeteries such as Hollywood (and Loudon Park Cemetery in Baltimore and even Mount Olivet Cemetery in Frederick, MD) that gave people the space for the large, creative monuments that make going to these cemeteries so interesting. The monuments range in style, from classical to naturalistic to gothic to Egyptian and art deco. 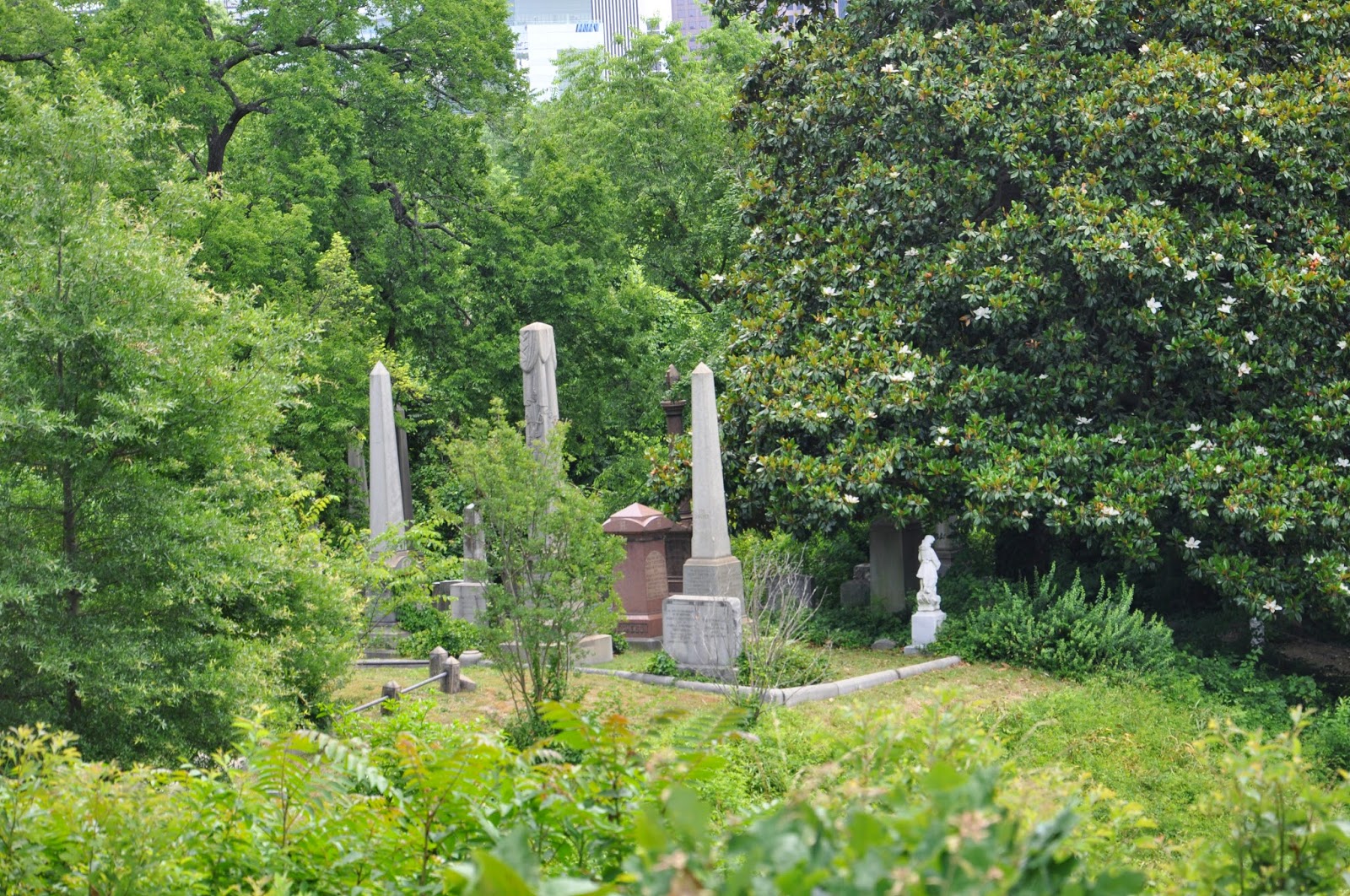 Having arrived at the cemetery 20 minutes after the single daily guided walking tour (at 10 a.m., sharp), my husband and I decided to explore on our own. We stumbled upon a ceremony commemorating Confederate States of America president Jefferson Davis' birthday on 3 June, at his gravesite. Curiosity got the best of us, so we joined in, appreciating the wreath-laying, the spectacle of re-enactors dressed in Confederate uniforms rubbing shoulders with modern-day quintessential Southern ladies in their lovely hats. Davis' gravesite appropriately is located near the edge of the bluff overlooking Richmond. As a Yankee I chuckled, wondering (to myself, since we were outnumbered there) whether they realized that the South, ummm....had lost the war. (It's also interesting to note that Davis had been reviled by his own people during the last years of the Civil War.) 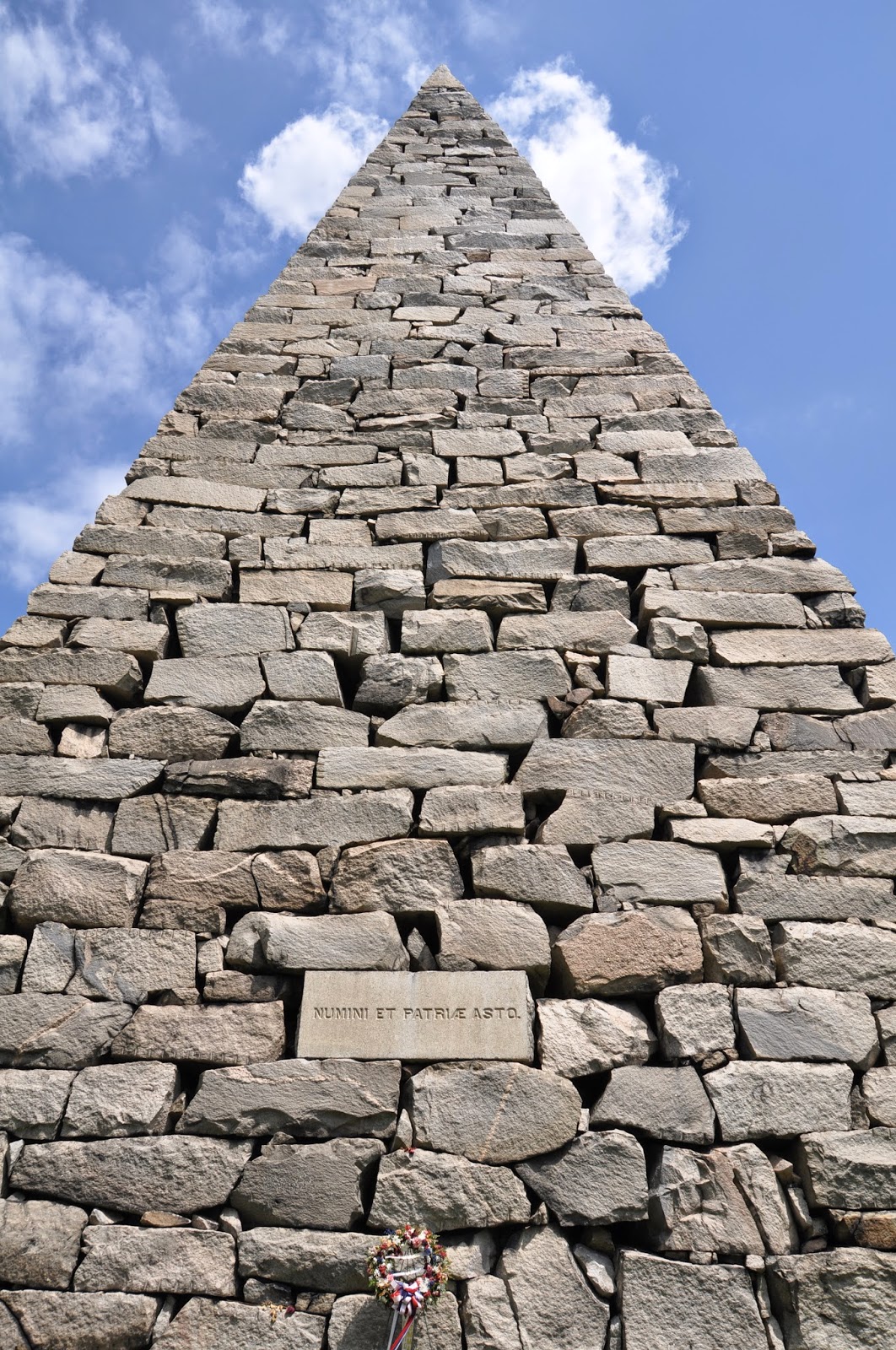 Some 18,000 Confederate soldiers also are interred in Hollywood. As you enter the Confederate Soldiers section, you can't help but notice the 90-foot-high pyramid honoring the Confederate dead. This monument was erected in 1869 with funds raised by the Hollywood Memorial Association. This was the first memorial placed in honor of soldiers of the "Lost Cause," as the Confederacy was thought of back then. (Ah, so they did realize they'd lost. Good to know.)

A story about the pyramid is that volunteers were sought for the dangerous and possibly fatal job of placing the capstone. There was only one volunteer, a sailor serving time in the nearby state penitentiary. When he successfully placed the capstone AND survived, the man was granted his freedom. 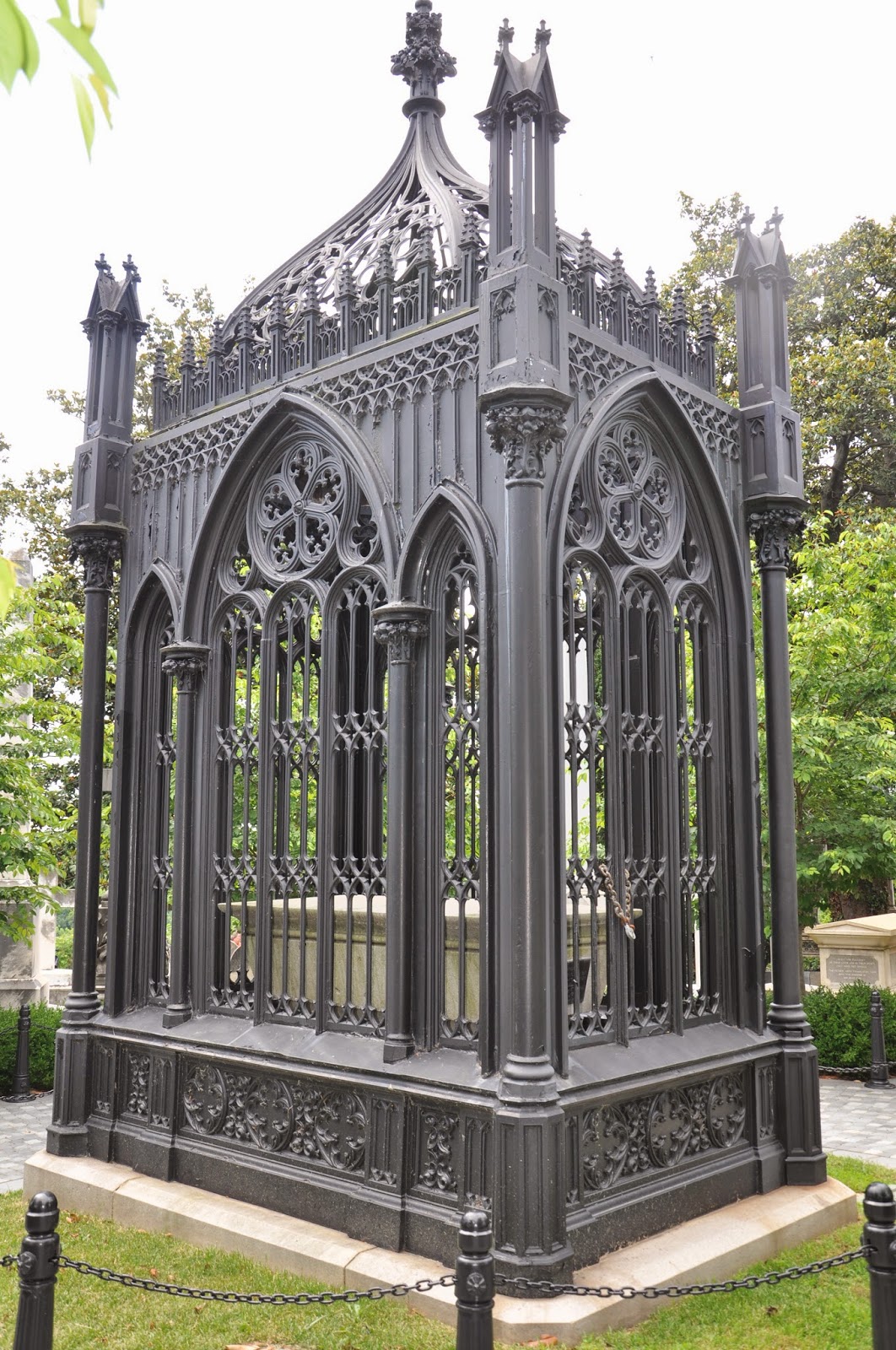 As the first, largest, and most prosperous of the British colonies in America, Virginia was the birthplace of four of the first five presidents of the United States -- and eight total U.S. presidents were born in Virginia, more than in any other state. In the 1850s, there was a movement to gather the remains of presidents who were native Virginians and re-inter them in Hollywood Cemetery. Thus, James Monroe's body was brought down from New York to a place of honor in the center of Presidents Circle. His is one of the most dramatic markers in the cemetery. The marker is "significant for the flamboyant and delicate tracery in cast iron," which forms a sort of "bird cage" over a simple granite sarcophagus. It is Victorian design at its best and most elaborate, and curiously beautiful (I've always been inclined to excess).

That's him. The song's lyrics sang the praises of Whig candidates William Henry Harrison (the "hero of Tippecanoe"), who died shortly after inauguration (but is not buried in Hollywood), and John Tyler, while denigrating incumbent Democrat Martin Van Buren. Tyler's grave stone is notable for its interesting eagle sculpture at the top, although it's hard to appreciate without a zoom lens on your camera.

Unfortunately, these two presidents were the only two, of the seven Virginia-born U.S. presidents who died before 1850, to be gathered to Hollywood. George Washington is interred, as per his wishes, at Mount Vernon; Thomas Jefferson at Monticello; James Madison at Montpelier; William Henry Harrison in North Bend, OH; and Zachary Taylor in Kentucky in a cemetery named for him.

Tip #1: To get the most out of your visit, before you go, make sure you view the slideshow offered by Hollywood's website: www.hollywoodcemetery.org/history-slideshow.html

Tip #2: There's a interesting little pamphlet, Hollywood Cemetery, A Tour (by James E. DuPriest, Jr., Richmond Discoveries, 1985) that I wish we had seen BEFORE we'd visited Hollywood Cemetery! Although it focuses on famous personages and not as much on the lovely statuary that can be found at the cemetery, it provides a map, a numbered stop tour, and information about the most famous gravesites.

Hours: Open but there are walking tours April through October, Monday through Saturday at 10 a.m.

Dogs: Sure! There were several dog-walkers while we were there and the cemetery is best appreciated on foot; be sure to bring baggies to pick up after them. 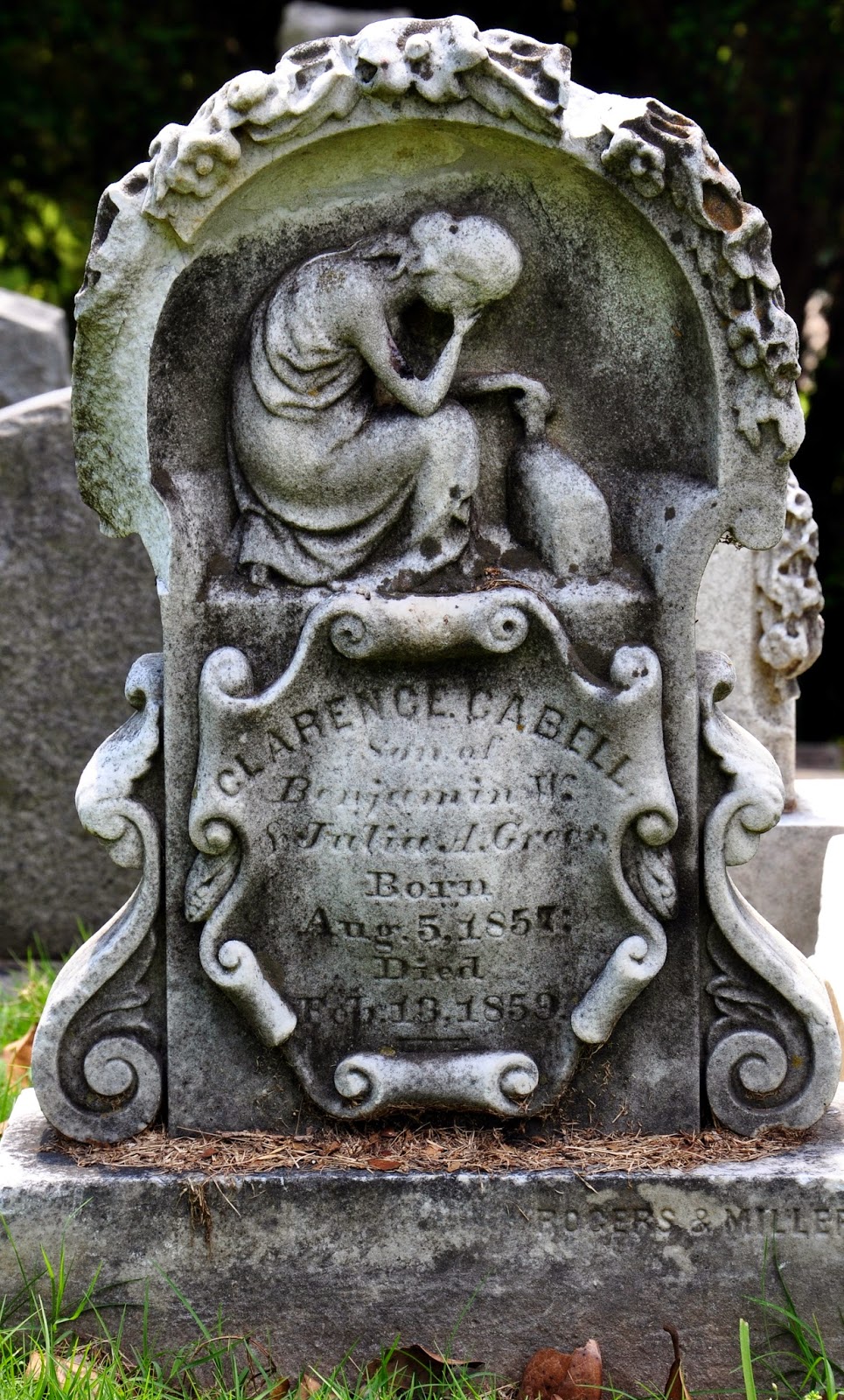