Wonderful summer weather lures all of us outside. Always on the lookout for new destinations, we decided to bike the path that continues on from Maryland's NCR Trail (read about our exploration of that here).

Established in 1992 and covering 176 acres, the Heritage Rail Trail County Park is 21 miles long and runs north from the Mason Dixon line just south of the Borough of New Freedom through Glen Rock, Hanover Junction, and Seven Valleys in the Howard Tunnel to the Colonial Courthouse in York, PA. It's within easy reach of Baltimore, being just an hour away straight up I-83. 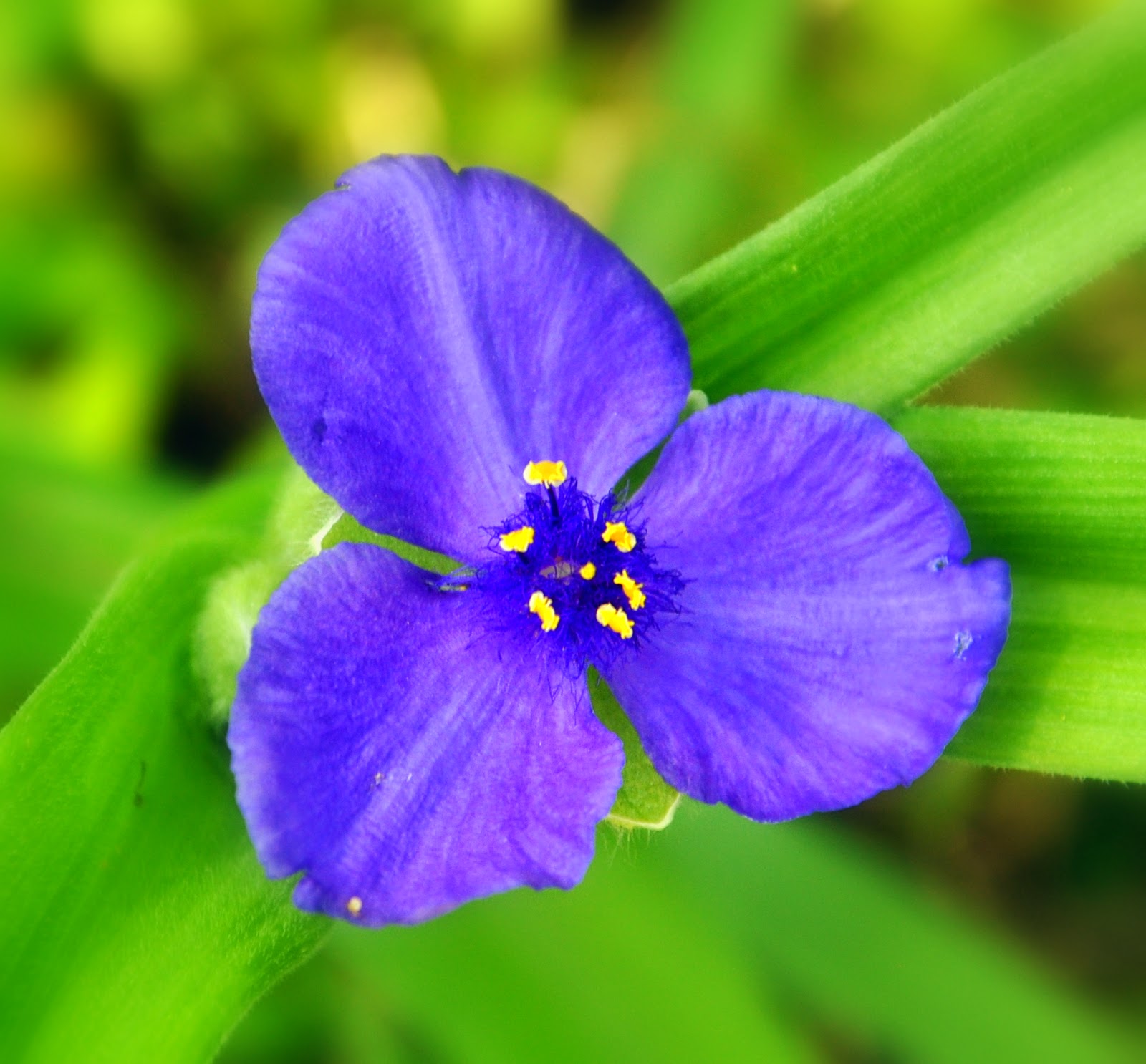 The trail connects to Maryland's 20-mile long Torrey C. Brown Trail (better known as the NCR Trail). Today, the rolling countryside along the old Northern Central route is relatively undeveloped – so it's easy to imagine how scenery would have looked a hundred years ago.

The trail passes through pastoral farmland, along a little creek that provides interesting views along the trail. There are beautiful old barns and stone houses, fields of goats and horses, and wild flowers, such as the purple spiderwort pictured to the right, along the trail. 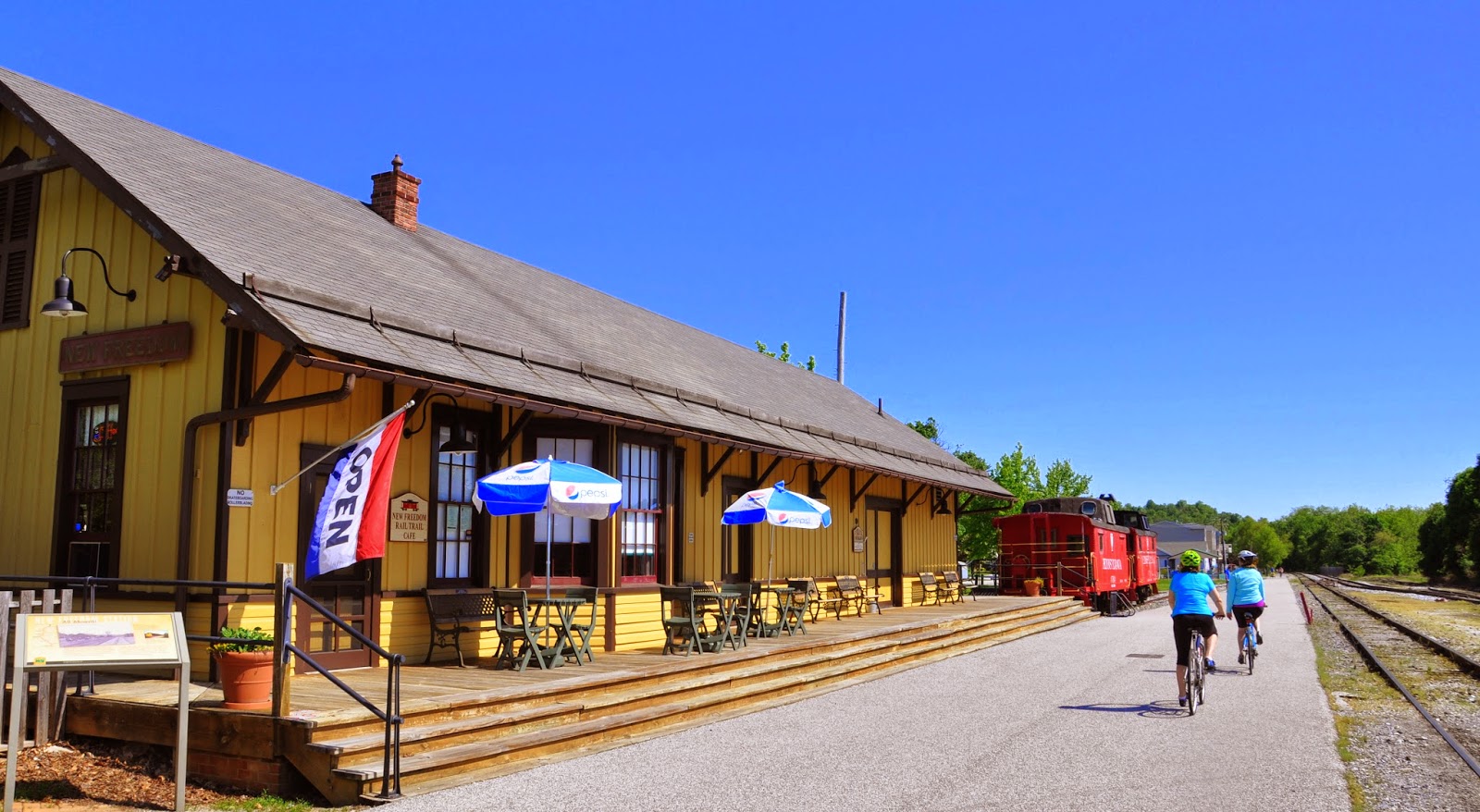 Our plan was to park at Hanover Junction and ride the 9ish miles to New Freedom, have brunch, and ride back. When we arrived at the parking lot, though, we were surprised to see the Bob Potts Marathon underway. Luckily for us, the trail wasn't closed to us, as long as we yielded to the runners. At any rate, most of the race course was to the north -- we were headed south to New Freedom. 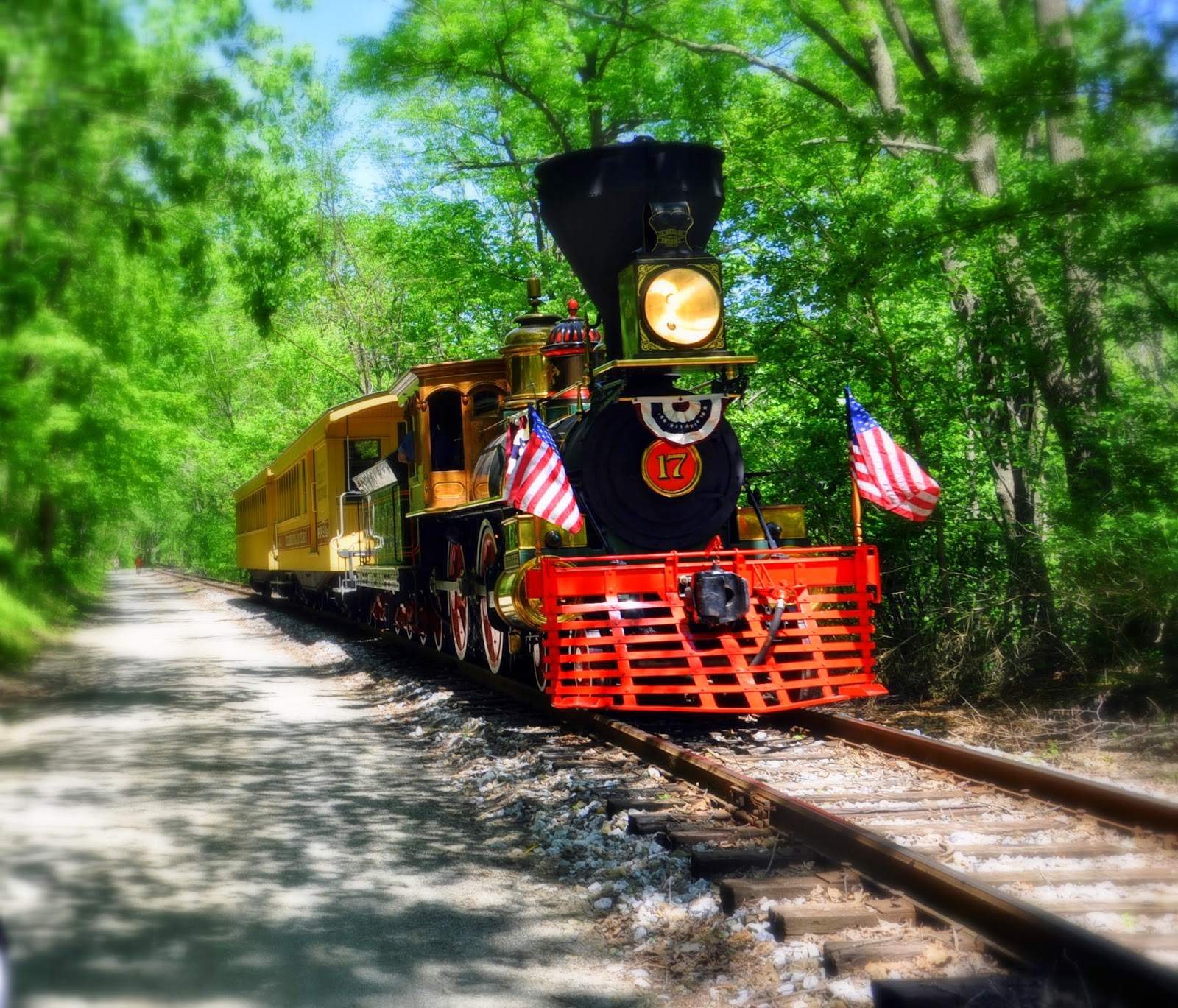 Although the grade throughout the trail is reasonably level, New Freedom is the high point., and no matter which direction you approach it from, there's a bit of climb. The PA side of the trail is quite different than the Maryland side. The path is wider, actually better maintained.

In addition, the old railroad still runs alongside throughout, and the rails are still active, although "just" for the Steam Into History Scenic Train rides. Expect to see a train at any time while enjoying a trip on the trail. In fact, we encountered the train as we rode back toward Hanover Junction, riding alongside of it for a bit before we sped off (we were traveling about 5 miles per hour faster than the train).

The 1800s saw the growth of the Northern Central Railroad, a vital link between Washington, DC; Harrisburg, PA; upstate New York; and Lake Ontario. Its passage through York County -- the Heritage Rail Trail runs through York County -- brought prosperity to the area's farmers, merchants, and manufacturers, and spurred the growth of communities such as New Freedom and Hanover Junction. 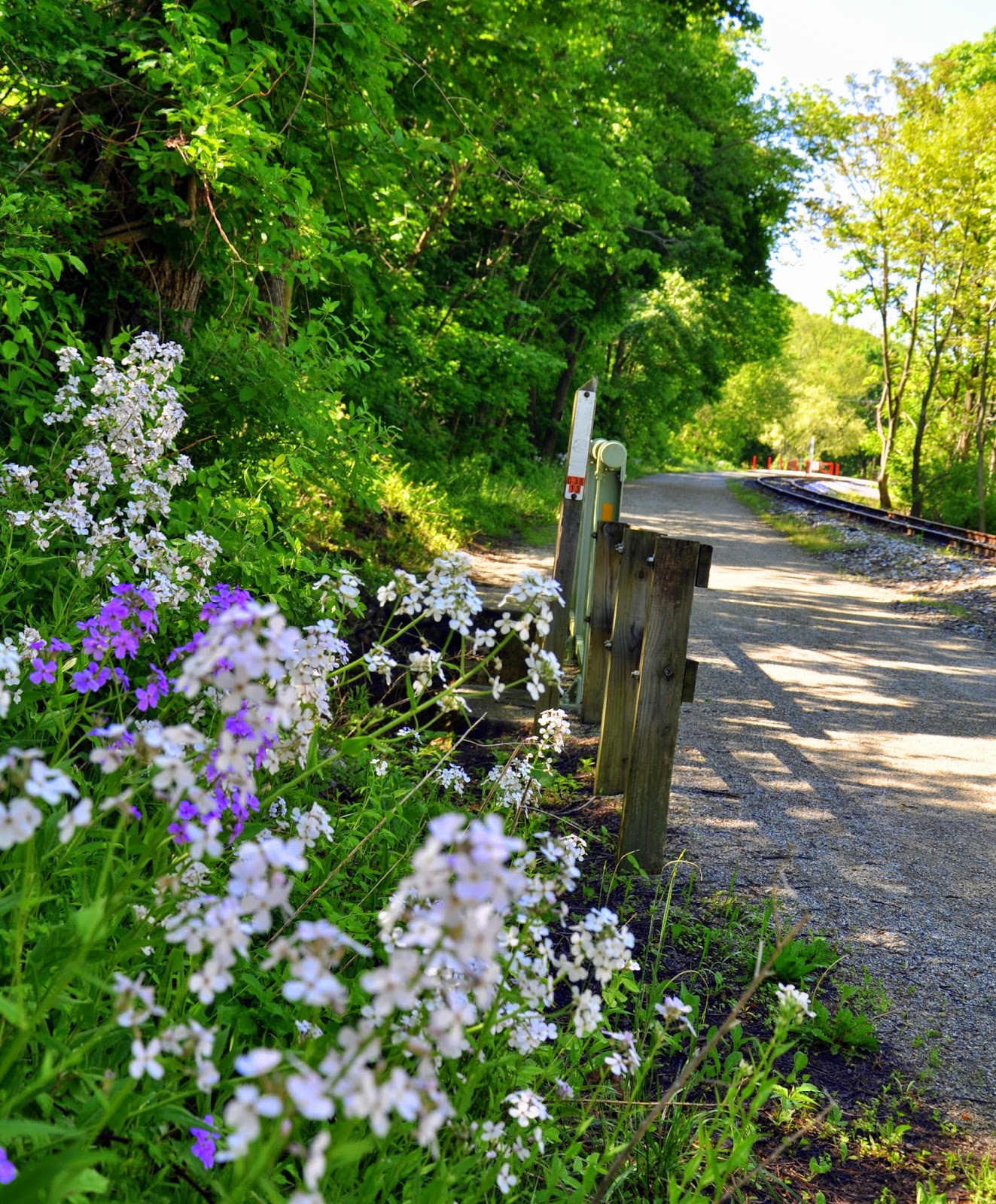 During the Civil War, the railroad was a prime target for the Confederates prior to the Battle of Gettysburg. Rebel troops cut telegraph wires and destroyed bridges in an attempt to isolate Washington DC from the rest of the Union. After the Gettysburg battle, President Lincoln traveled via the NCR to Hanover Junction, where his train headed west to Gettysburg so he could deliver his famous Address. The Steam Into History engine is a replica of the locomotive of the train Abraham Lincoln rode to present the Gettysburg Address and two years later carried his body in a funeral car.

When we arrived in New Freedom, we headed straight to the New Freedom Rail Trail Cafe, which offers breakfast and lunch entrees, as well as smoothies and coffee. We both decided on the Knuckle Sandwich -- scrambled eggs, cheese, and turkey sausage on a toasted ciabatta roll. That and an iced coffee made a most excellent break from the bike ride and provided us energy for the return ride. It's worth noting that the New Freedom train station is restored to its 1940 history. The museum there is open only on Saturdays. 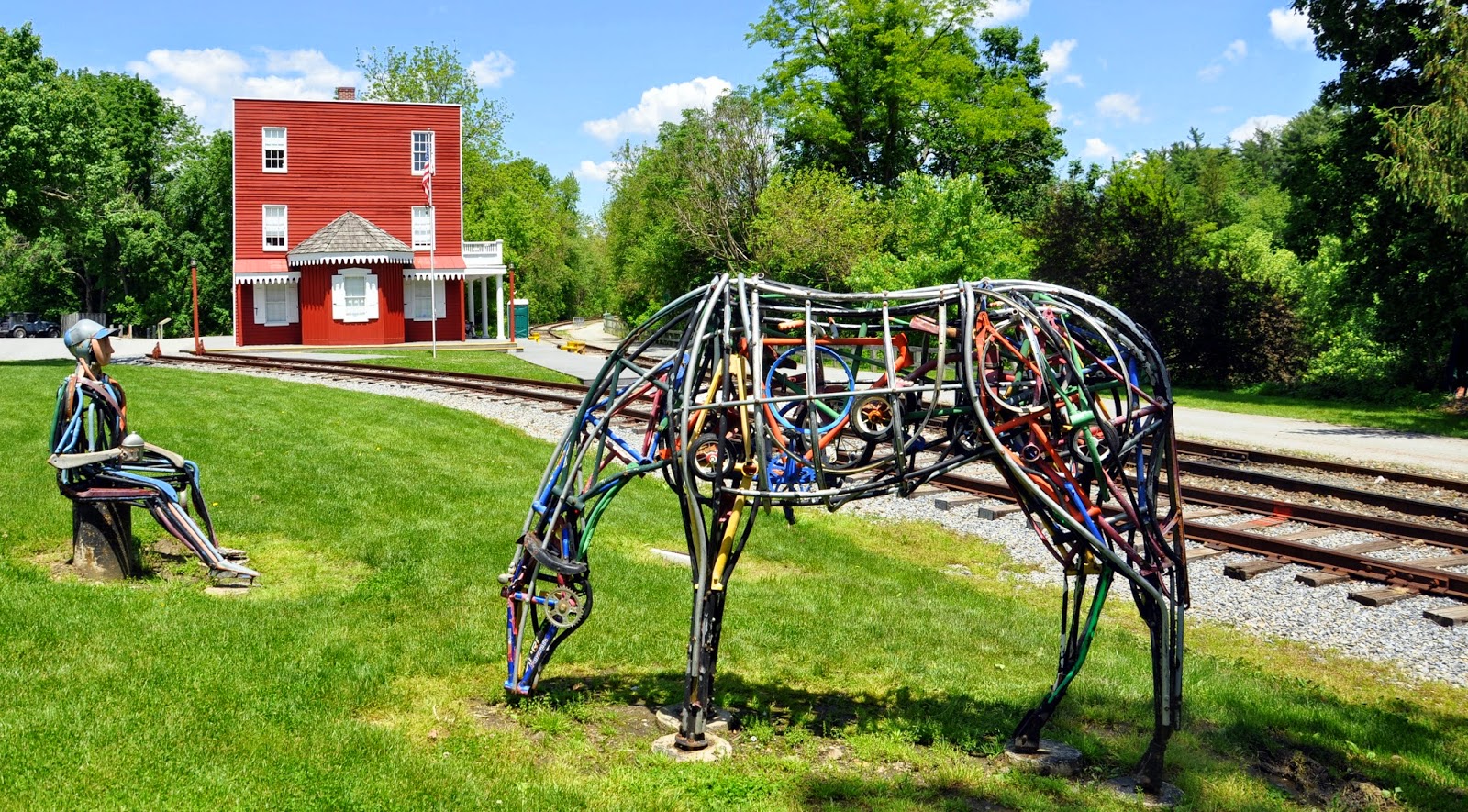 The ride back to Hanover Junction was mostly downhill, making it an enjoyable ride as the day was heating up. The spur line junction, which carried Lincoln west to Gettysburg, at Hanover Junction is still there, as is the old train station, restored to its state in the late 1860s. The station is in a lovely setting -- with some artwork on the lawn and a garden dedicated to the memory of Abe Lincoln for all to enjoy.

The York County Park Service offers special 12 to 15 mile rides on the trail. Each ride has a different starting place. It also offers a 9-mile "moonlit" ride, during which riders can enjoy learning about local folklore, history, and nature. 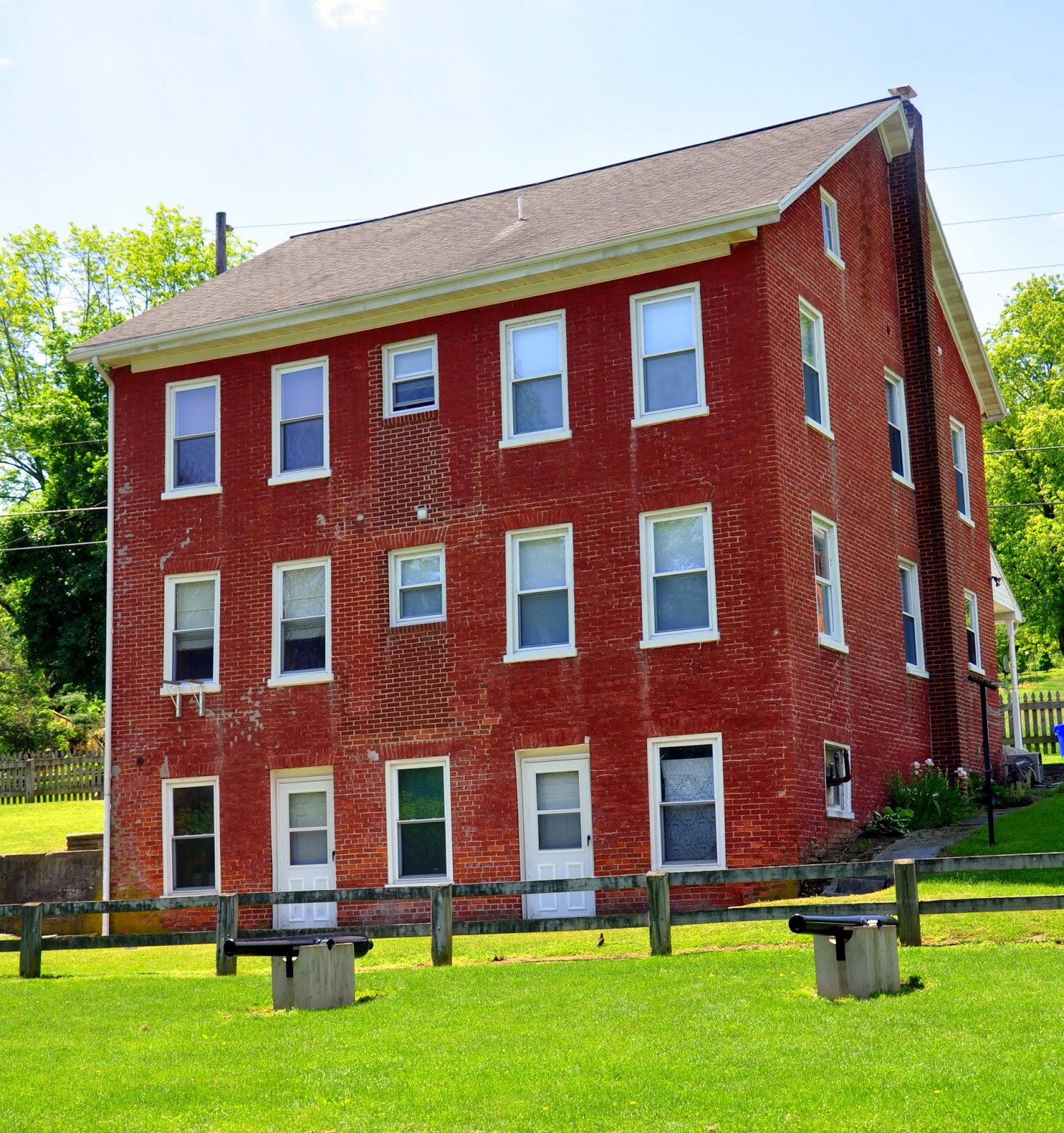 Getting there: There are multiple places to park along the Heritage Rail Trail. Check the park's website for specific directiojns.

Dogs: Happy tails! By all means, bring them!

Have you daytripped somewhere interesting? I'd love to hear what you're doing! Email [email protected] if you're interested in being a guest-blogger!
Posted by Jody Arneson at 4:32 PM