In Search of .... Kayaking to Assateague Island to See the Ponies

This day trip would take us on a kayaking trip from Chincoteague across Assateague Narrows to Assateague Island to see the wild ponies. We'd have to get up very early -- Chincoteague is just over 3 hours away from where we live, near Baltimore, and I knew I'd have to get my stepson to agree to stop in to take care of the beagles and Baxter since we'd be leaving before 5 a.m. (for the 8:30 a.m. tour) and that's before their normal breakfast and morning outing times. My stepson agreed (thank you!!), so we went ahead and planned the day trip for last weekend. Because kayaking would take us across the narrows to the island, seeing the ponies close up, and not from a car window, made the long early morning drive worth it. 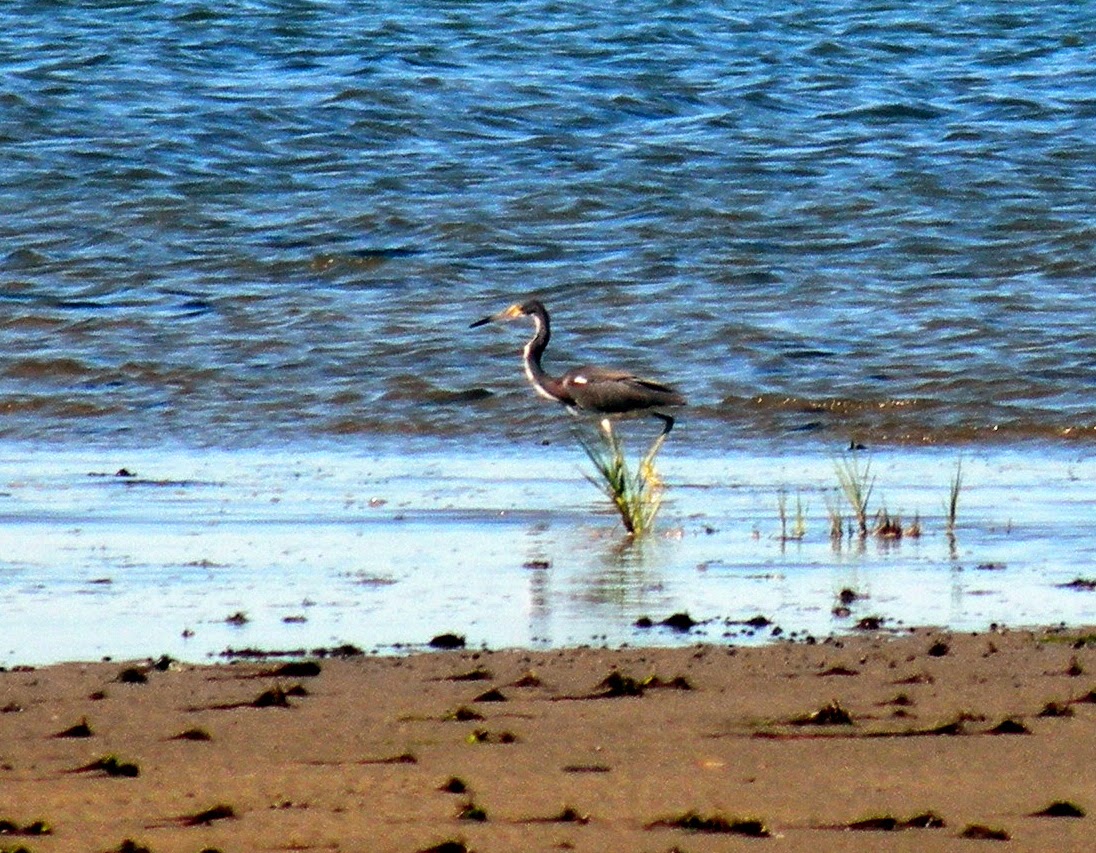 I'm a big fan of Assateague and visiting with the ponies -- my husband and I had last visited Assateague Island on the Maryland end, last November. I'd first learned about this kayaking tour last fall and the minute I'd heard about it, I wanted to do it - what an interesting way to enjoy the scenery and the island! I even put this on my wish list for 2014!

Even beginners can go on this tour -- and one family brought two very small children, one of whom was a little girl not much more than a year old. But you do have to paddle (unless you're a toddler), sometimes against the tide and that can be tiring. Both of our sons did fine -- but they've both been kayaking before, several times on Centennial Lake in Ellicott City and once a 4-hour trip down the Potomac River. The tour guide gauges the group and provided several rests along the way. We spent most of our time just getting over the Narrows to Assateague and then paddling back -- that's part of the point of the tour: To enjoy being out on the water, close to the water. It's a little scary the first time a boat goes ripping past you, but you learn to head into the wake to avoid the worst of the back-and-forth of the resulting waves. 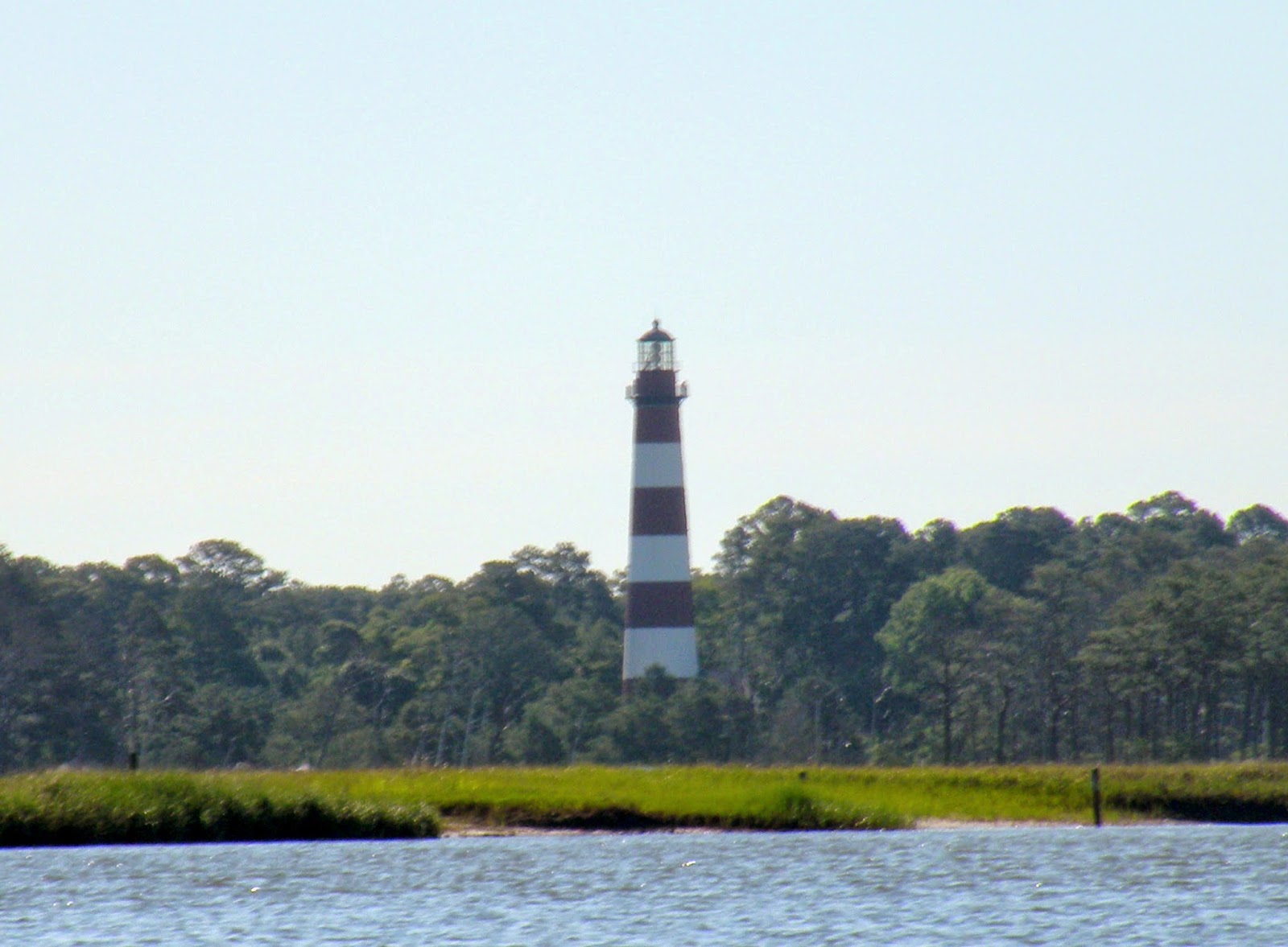 But back to kayaking and the ponies. The thing with eco-tourism is that the wildlife don't always comply with your schedule. Luck wasn't with us on this trip -- the ponies stayed far away from shore, a disappointment. But the weather couldn't have been better for the 5th day of July -- low humidity and a breezy 75 degrees when we arrived at Assateague Explorer. Although we went with this tour company this time, I noticed that there were several other companies advertising kayak and boat tours, as well as kayak rentals. And don't be fooled by companies' claims for "pony sightings guaranteed." One firm with such guarantees supposedly collects an extra $10 for the guarantee, and then willingly refunds the $10 if you don't see a pony. But you're still out the main amount for the trip itself. We "saw" ponies on this trip, but they were far away, more like a smudge against the green marsh grass in the distance. I've been following Assateague Explorer's facebook page -- and sure enough, they showed photos of dolphins, with the caption of "Dolphins on the right, ponies on the left" the week after we were there! Oh well. :)

Assateague Explorer doesn't guarantee that you'll see anything but water and sky. Our guide told us some of the tours he's led recently have seen eagles, bottle nose dolphins in the Narrows, and of course, ponies galore. We saw none of that, although a green heron hunted nearby. I felt envious of those other groups -- although I have to admit, we've had so much luck on other day trips that we've taken recently that I figured I was due for a small disappointment. We'll just have to do this again next year -- maybe we'll be more lucky.

After the tour ended, we headed back to Chincoteague for lunch at the aptly named Chincoteague Diner. Then, since we were so close, we braved the crowds to head over to Assateague -- maybe we'll get a better look at the herd from on the island itself.

We did -- the ponies complied, by coming within easy view on our way back off the island. They are beautiful! It is not known exactly how these horses came to the island. Local folklore describes the Assateague horses as survivors of Spanish galleon shipwrecks off the Virginia coast. While this dramatic and romantic tale of struggle and survival is popular, there are no records that confirm it. The most plausible explanation is that they are the descendants of horses that were brought to barrier islands like Assateague in the late 17th century by mainland owners to avoid fencing laws and taxation of livestock.

The ponies struggle to survive on the island. The summer brings mosquitoes, horse flies, and scorching heat; the winter brings frigid, unrelenting winds and storms. These are tough little ponies! 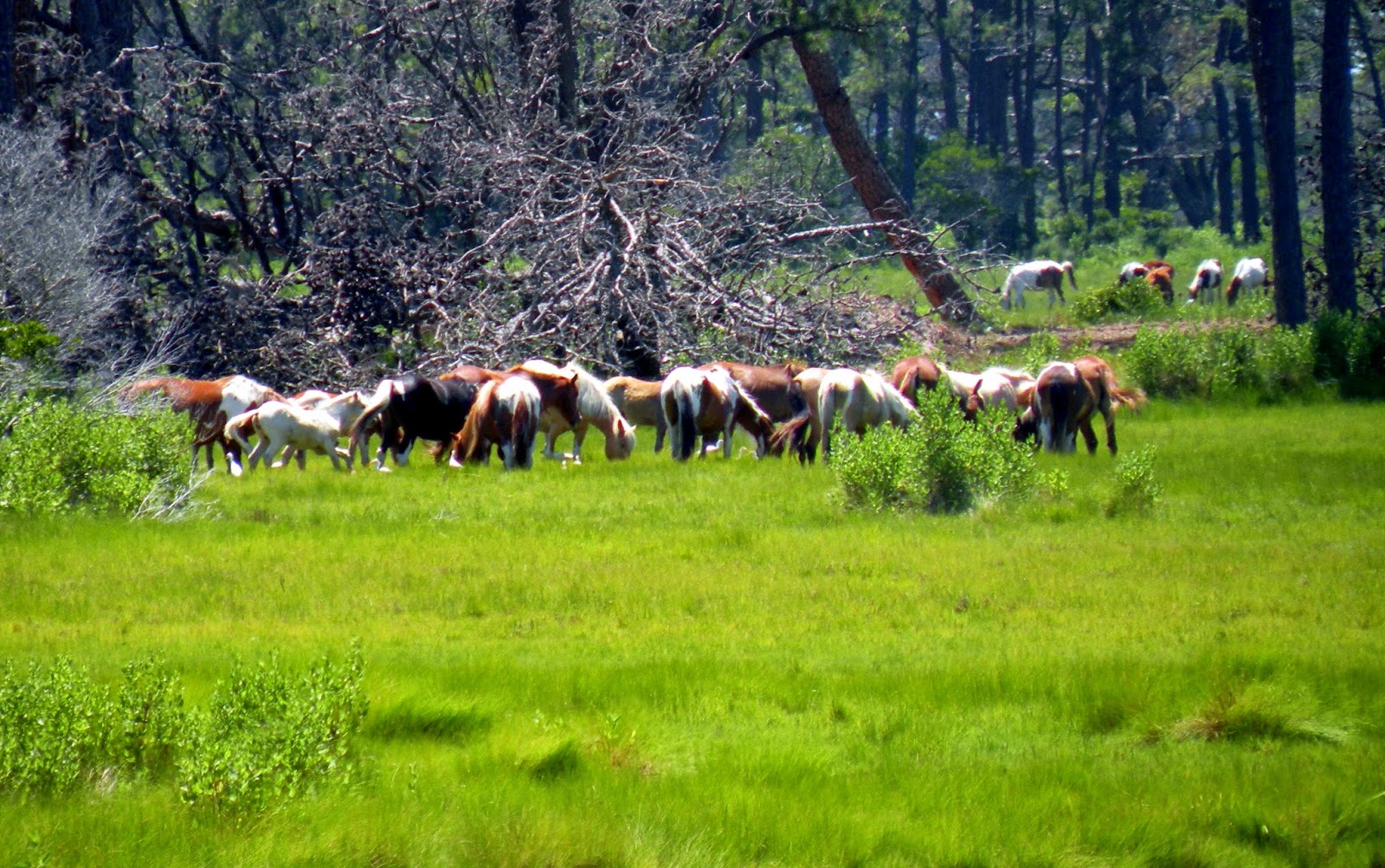 The famous Pony Penning -- made famous by Marguerite Henry's series of children's books about the wild horses, beginning with her most famous, Misty of Chincoteague -- is held every year on the last consecutive Wednesday and Thursday of July, this year on July 30 and 31. On Wednesday, the ponies swim the channel between Assateague Island and Chincoteague (veterinarians only allow those ponies deemed fit enough to make the short swim); on Thursday, the foals and yearlings are auctioned off as a fundraiser for the Chincoteague Volunteer Fire Company. Those not sold return to Assateague Island on Friday. Our tour guide mentioned that the ponies have been known to swim over on their own to Chincoteague Island, on food raiding sorties, as it were. I can just imagine an old "teaguer" calling out to his wife, "Lock up the goods, Matilda, the ponies are on their way!" 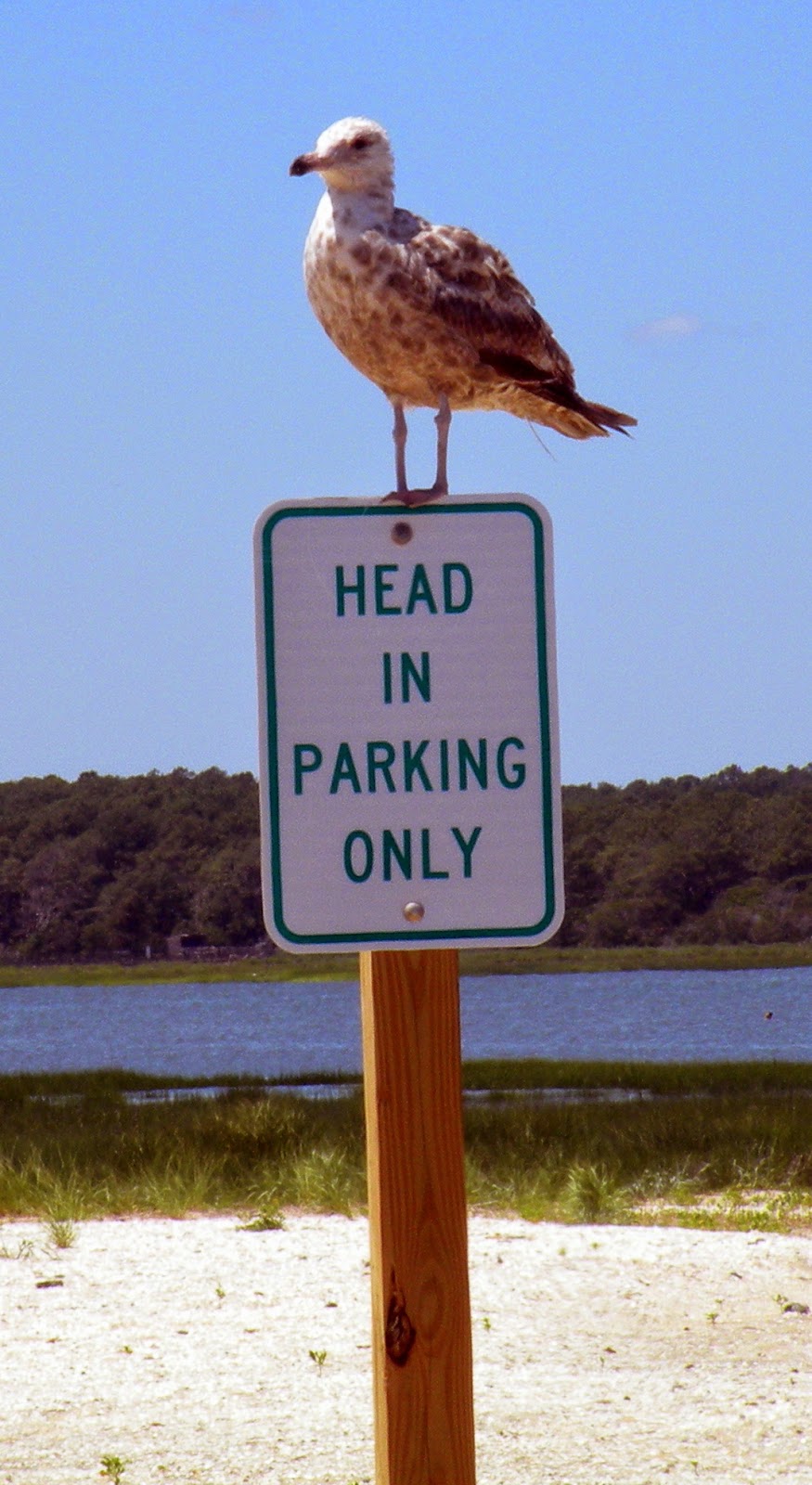 Hint #1: Bring water for the kayaking tour -- in a water backpack, if you have one (you won't regret it, and they will fit either under or over your life jacket). Hats and sun glasses recommended; sun block is a must!

Hint #2: If you're entering Assateague Island to go to the beach after lunch on a summer Saturday, don't drive. Ride a bike instead -- you'll go much faster and won't have to worry about not finding a parking spot. There looked like there were some fun trails on Assateague Island -- we will be back with our bikes to check them out!

Hint #3: If you're a little unsure of yourself in a kayak, try getting a double. If you go with  your spouse you may want marriage counseling or a really good criminal defense lawyer afterward...

Getting there: Assateague Explorer's kayak tours leave from 7512 East Side Rd., Chincoteague Island; the Assateague Lighthouse is open April - November, 9 a.m. - 3 p.m. (7 days a week in June - September. Friday -Sunday in other months).

Hours: Kayak and boat tours run at different times throughout the day. Check the website for tour times.

Dogs: Sorry, no. They aren't welcome on Assateague Island, and certainly not on the kayaking tour!