Living History: Sailing on a Skipjack

The skipjack is a traditional fishing boat used on Chesapeake Bay for oyster dredging and was the predominant oystering boat in the Bay -- there used to be thousands of these boats working the oyster beds -- so it was a real treat to get to see one sailing near Tilghman Island one day last June. Although that way of life is fast disappearing, some of the boats that still sail today also provide tours for the public. And how cool is it to take a ride on a real, honest to goodness working skipjack?!! 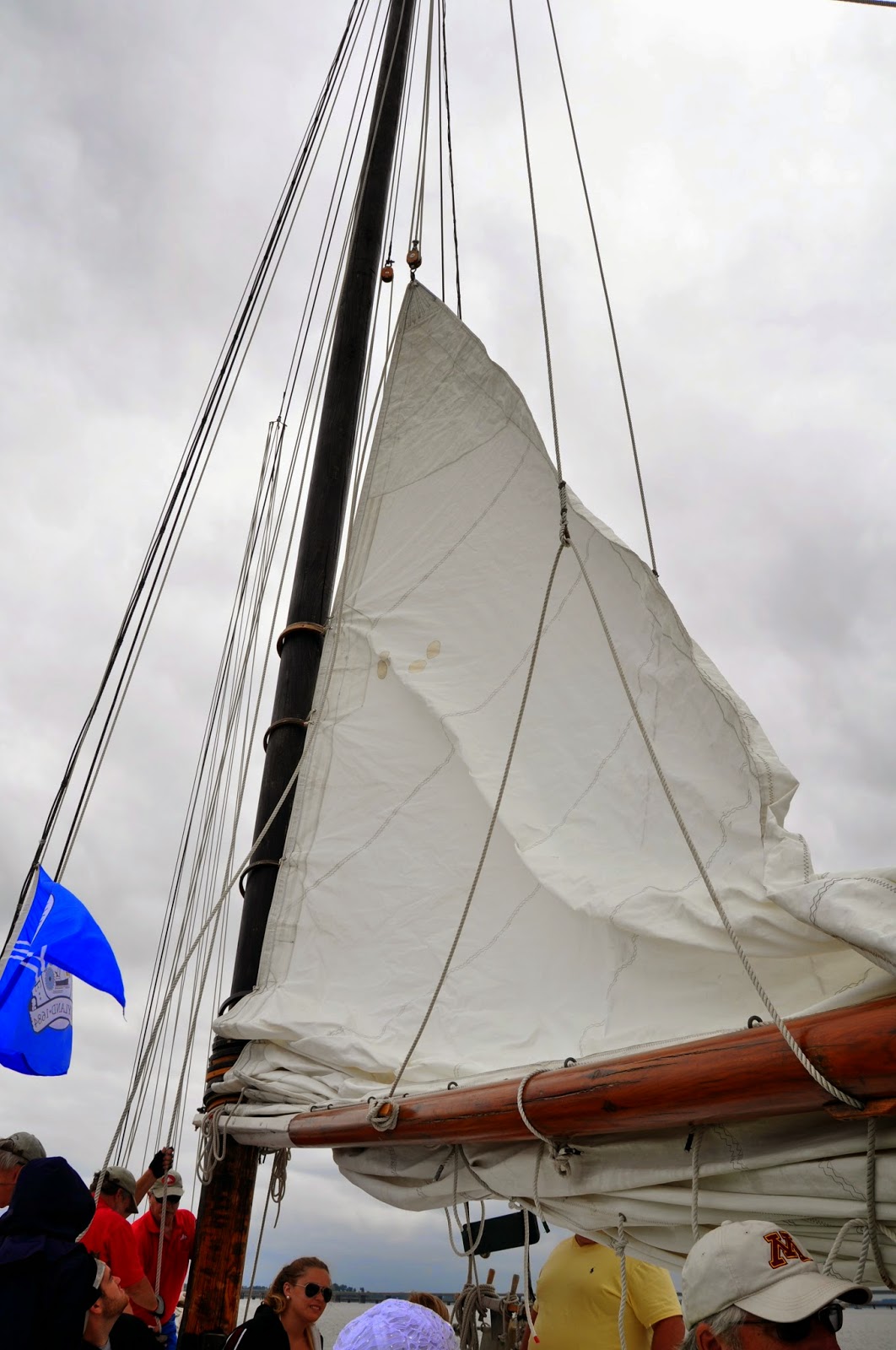 There used to be 2000 skipjacks sailing on the Chesapeake Bay; today, there's about 40, with less than half of them actively oystering (is that a word?). Many provide tours similar to those run by the Nathan of Dorchester. Unfortunately, as the productivity of the oyster beds continues to decline, so does the likelihood that we'll continue to see these nimble sailboats on the Bay. Because of its central role in Maryland history, the skipjack was designated the state boat of Maryland in 1985.


You can't live near or visit the Bay without trying some of the food that the Bay is famous for: blue crabs, clams, and of course, oysters. Even as late as the 1950s, the Bay supported 9,000 full-time watermen -- now, not so much, thanks to runoff from urban areas and farms, over-harvesting, and invasion of foreign species.

Oysters are at the center of Chesapeake Bay history, as well as that of the Maryland skipjacks.

The plentiful oyster harvests of the 1800s led to the 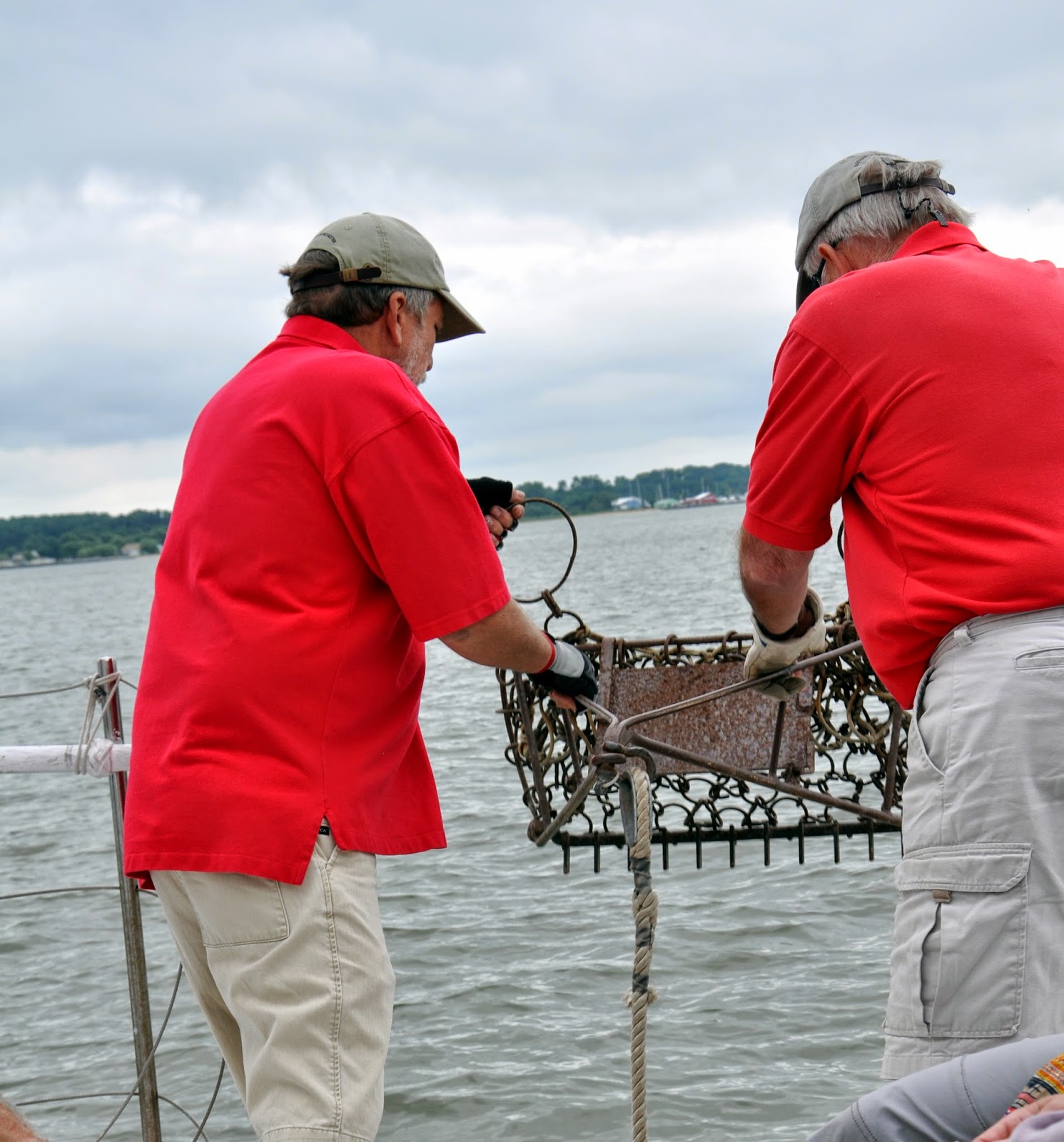 development of the skipjack, which, by the way, is the only remaining working boat type in the United States still under sail power (a nugget for you trivia fans). These sailboats remain in service due to laws restricting the use of powerboats in the Maryland state oyster fishery.

During the 2-hour tour on the Nathan of Dorchester, the crew demonstrated dredging for oysters. When the yield came up, they tallied the number of live clams (about 10, a third of a bushel) as part of a research study, then carefully retraced the boat's path to return the live oysters to their homes at the bottom of the Bay.

While the Bay's salinity is ideal for oysters, the last 50 years has devastated the remaining population. Maryland once had roughly 200,000 acres of oyster reefs. Today it has less than 36,000. 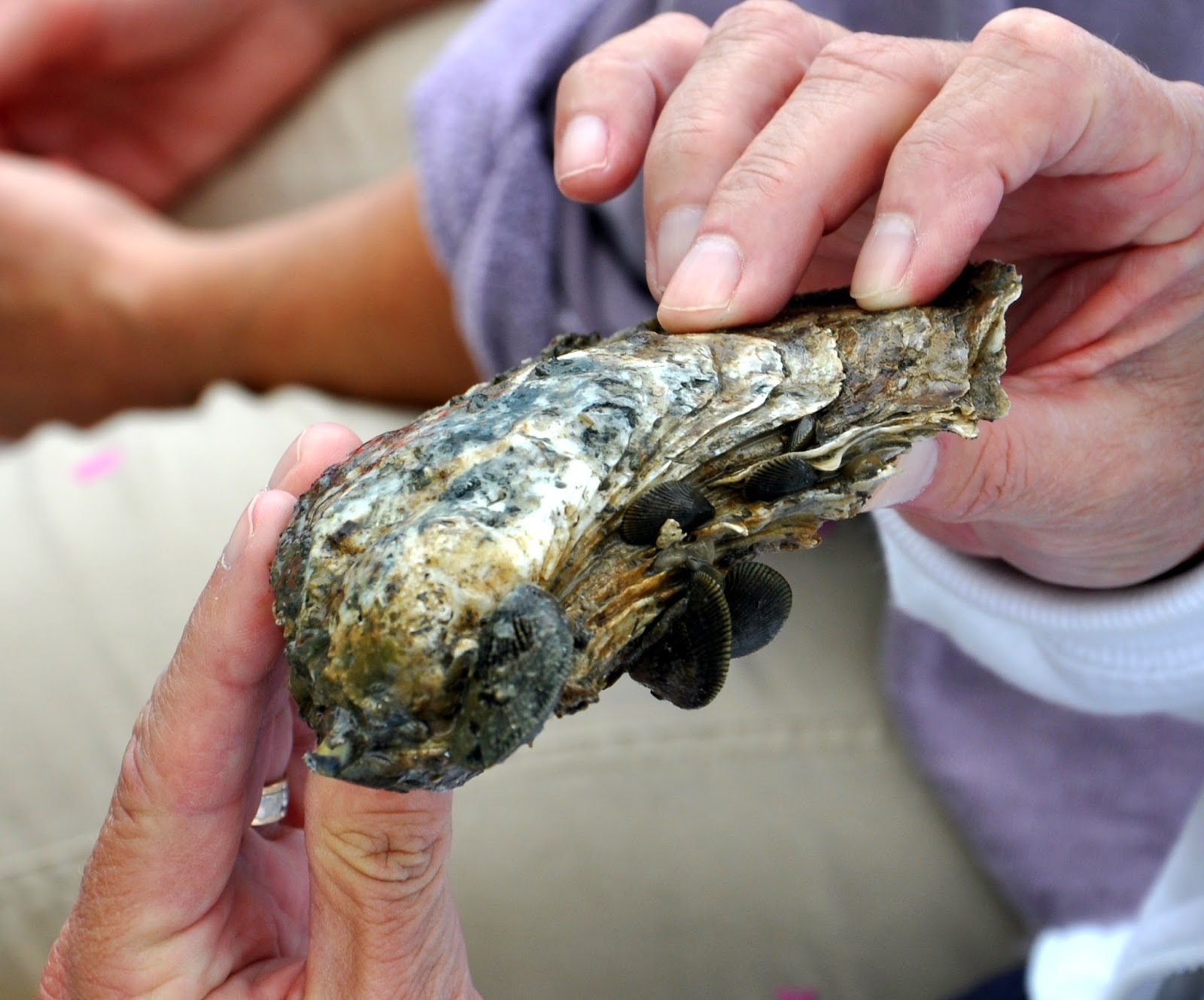 Although the primary problem is over-harvesting, which has made it difficult for them to reproduce, the drastic increase in human population all around the Bay has caused a corresponding sharp increase in pollution flowing into the Bay. (And still Maryland and Virginia find it difficult to enact meaningful legislation that will help the Bay.)

The depletion of oysters has had a particularly harmful effect on the quality of the bay. Oysters serve as natural water filters, and their decline has further reduced the water quality of the bay. It has been estimated that in precolonial times, oysters could filter the entirety of the bay in just over 3 days; now it takes close to a year. Imagine being able to look down into the water and see the bottom!

The decline of the wild oyster beds is one reason why remaining skipjacks are turning to the tourism industry to help make ends meet. And that's even more reason to go on a skipjack tour, although quite honestly, any excuse to get out on the Chesapeake Bay -- or in our case last weekend, the Choptank River -- will do). Although oyster season is in months with an R (with the exception of April, I believe), warm weather rides still give you a glimpse into the what it was like to dredge oyster beds aboard a skipjack. And, it's just lovely to move across the water, silently, under the billowing sails.

The good news is that there are dedicated individuals and organizations determined to keep these boats and a core aspect of Maryland history alive. Several skipjacks, like Caleb W. Jones, Rosie Parks, and Ida May, have been restored in recent years and are again sailing the Bay. Others are currently undergoing major restoration or repairs, including Kathryn, Helen Virginia, and Martha Lewis. Helping support these boats will help keep some Chesapeake Bay history alive.

The Nathan of Dorchester was built by volunteers and launched 20 years ago, on the July 4, 1994. She is the youngest of the Bay's skipjacks -- and probably the last to be built -- and still is owned, operated, crewed, and maintained by the nonprofit Dorchester Skipjack Committee's volunteers.

The original idea had been to restore 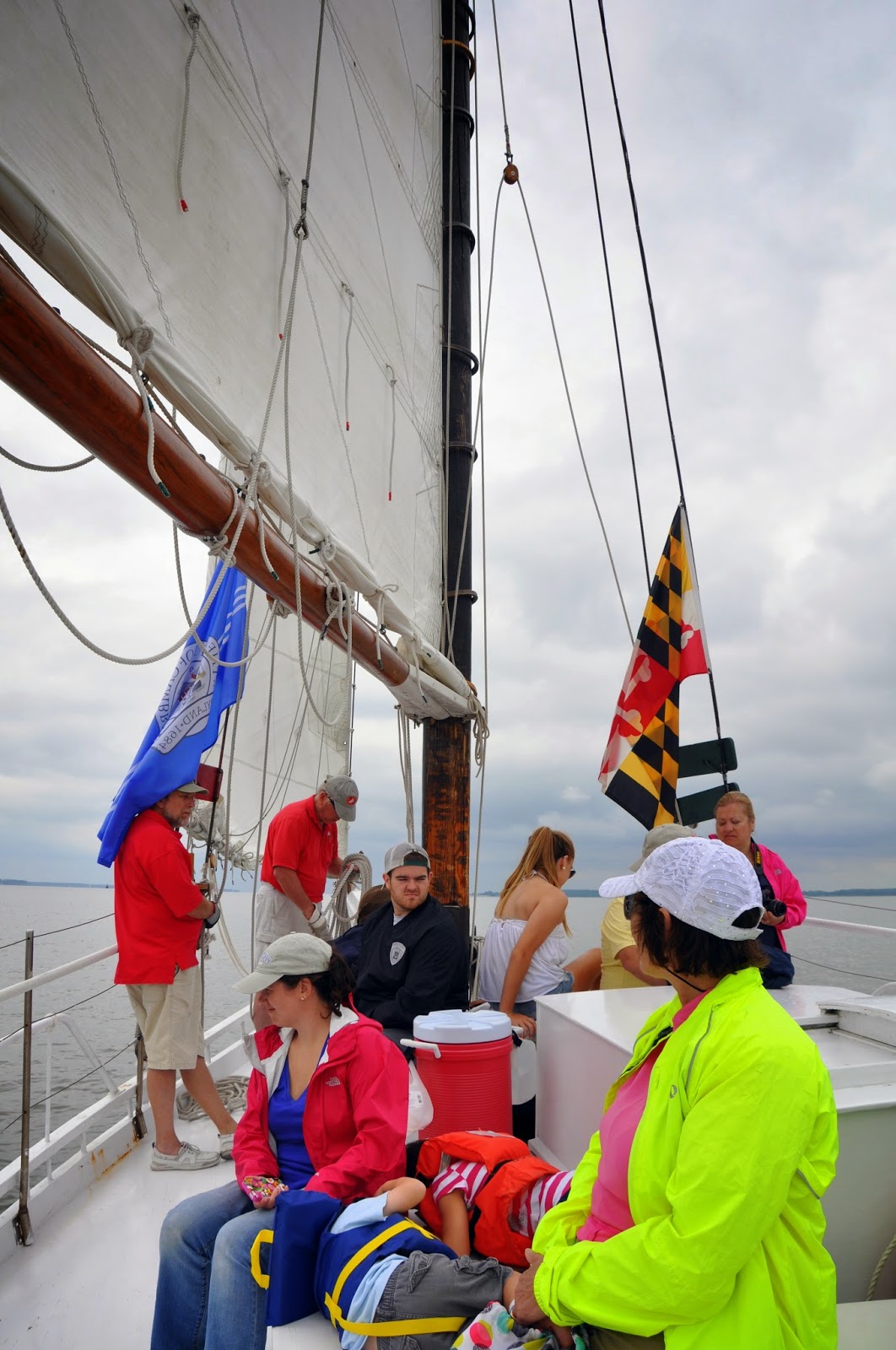 an historic skipjack. After making a search of some of the old skipjack ports, many old derelicts were found. None seemed worthy of reconstruction, and the better maintained boats were not for sale.

So they decided to build a new skipjack, using hardware salvaged from older boats -- fitting for a skipjack serving as a goodwill ambassador. The winders that were originally on the Nathan’s deck were from Nellie Byrd, built in 1911, as were some of the rigging blocks. The davits and dredge rollers came from Susan May, built at Oriole, MD, in 1901. The windlass is from the Clarence Crockett, built at Deep Creek, VA, in 1908. The wheel and gear box came from Wilma Lee, built at Wingate, MD, in 1940.

Designed by Harold Ruark along the lines of a previous family-built and -operated skipjack, Oregon, she is a medium-sized dredge boat capable of harvesting and carrying about 200 bushels of oysters.

Captain Robert “Bobby” Ruark, a lifelong Dorchester County waterman and boatwright, directed the construction of Nathan at Generation III marina at the head of Cambridge Creek. She was built only a few hundred yards from where the first Dorchester skipjack, Eva, was built more than 90 years earlier.

Ruark is a venerable name among boatwrights -- in fact, in Cambridge there is the Ruark Boatworks, named after Harold, where restoration and demonstrations are still held. 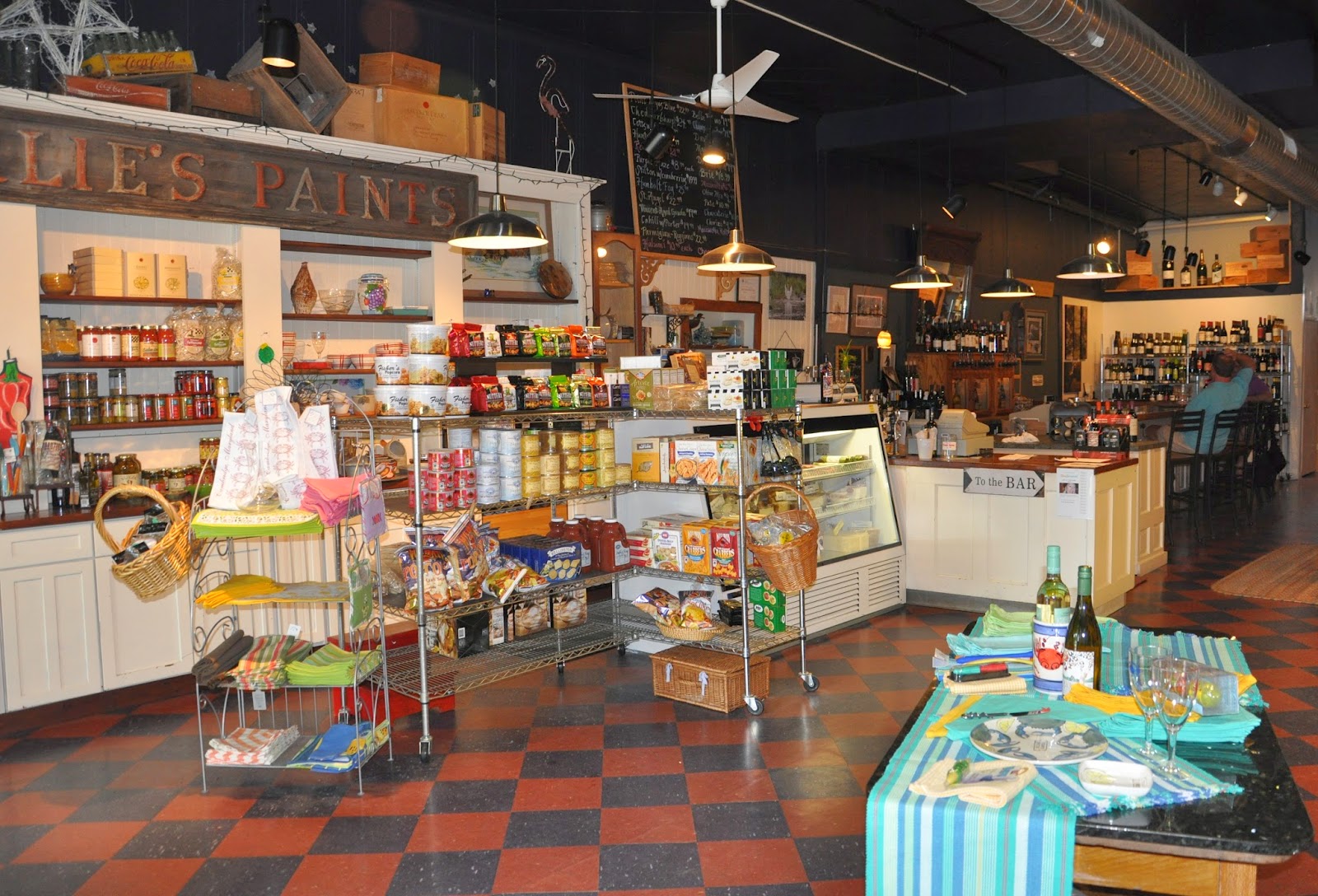 Tip #1: Visit local Cambridge boutique "A Few of My Favorite Things Winebar," owned by Carol and Joe Ruark (the grandson and son, respectively of Harold and Bobby). This "gift and gourmet" shop and winebar offers wines, chocolate, and cheese, as well as upscale gifts. Stop by for a quick lunch before boarding the Nathan of Dorchester: I recommend either the Drunken Goat Cheese Sandwich (try it with prosciutto) and the Gouda Cheese Sandwich -- both delicious! While you're there -- enjoy a glass or two of wine as well! 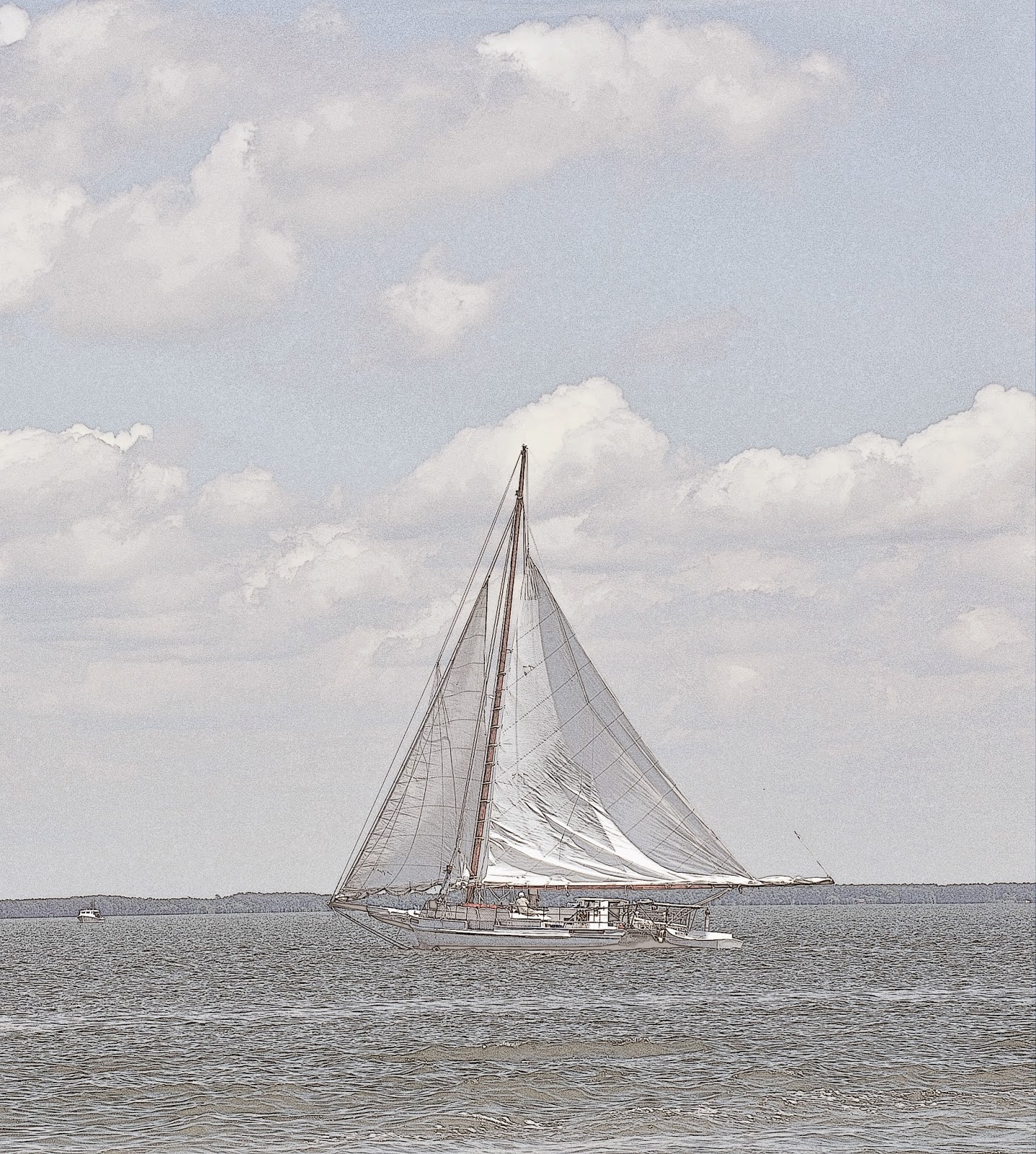 Tip #2: There is an interesting podcast by Stuff You Missed in History Class about the Oyster Wars, a series of sometimes violent disputes between oyster pirates and authorities and watermen from Maryland and Virginia in the waters of the Chesapeake Bay and the Potomac River from 1865 until about 1959. Check it out at http://www.missedinhistory.com/

Getting there: The Nathan's regularly scheduled public sails depart from Long Wharf, at the end of High Street, in Cambridge.

Hours: The Nathan's public sailing season runs from May through October, Saturdays and some Sundays at 1 p.m. The Ruark Boatworks may be toured through the Richardson Maritime Museum in Cambridge, which is open Wednesdays and Saturdays 1 - 4 p.m. and Sundays 10 a.m. - 4 p.m. 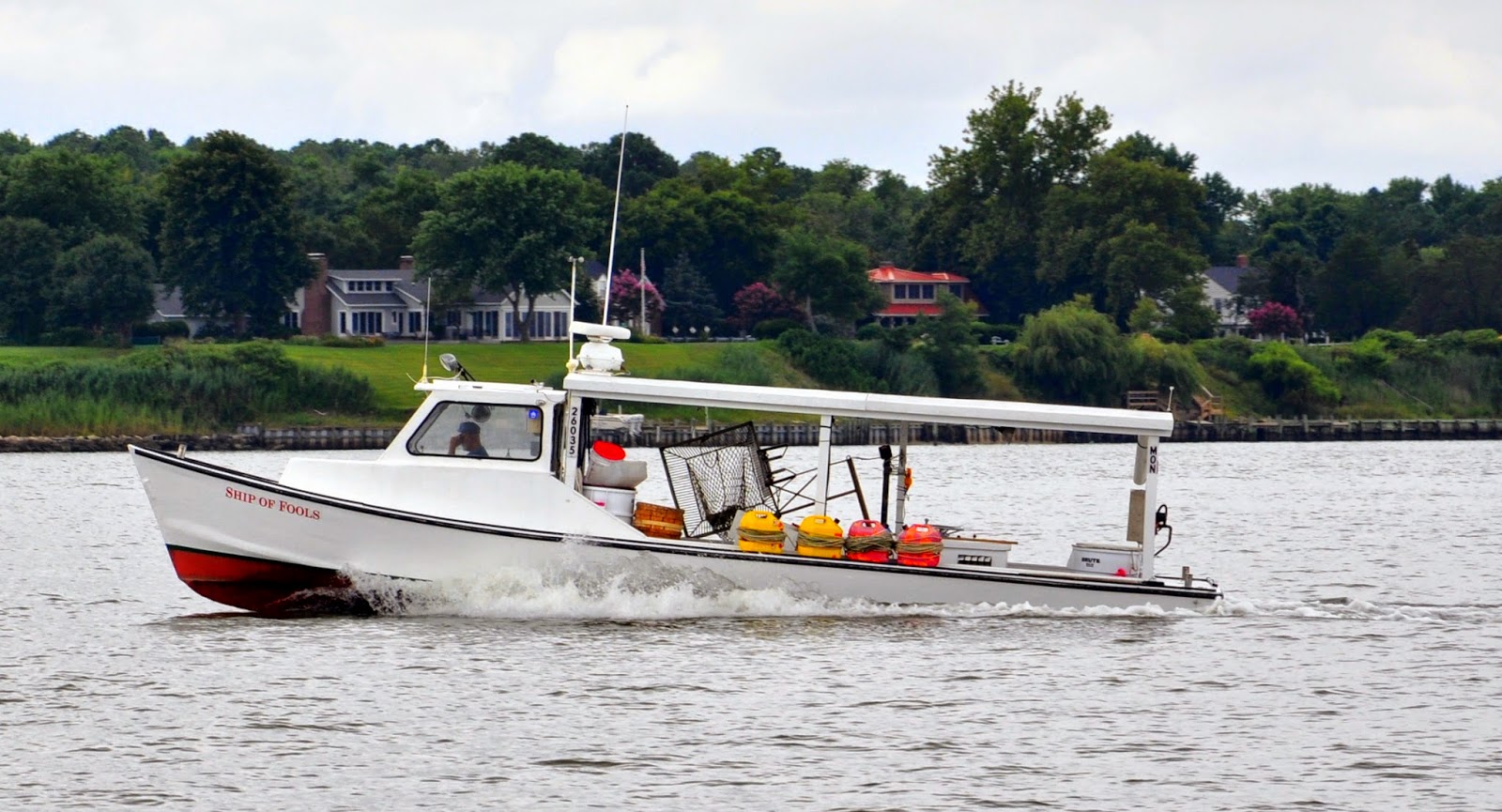 Much thanks to Choptank Communications, which arranged the tour on the Nathan of Dorchester and the visit to A Few of My Favorite Things.