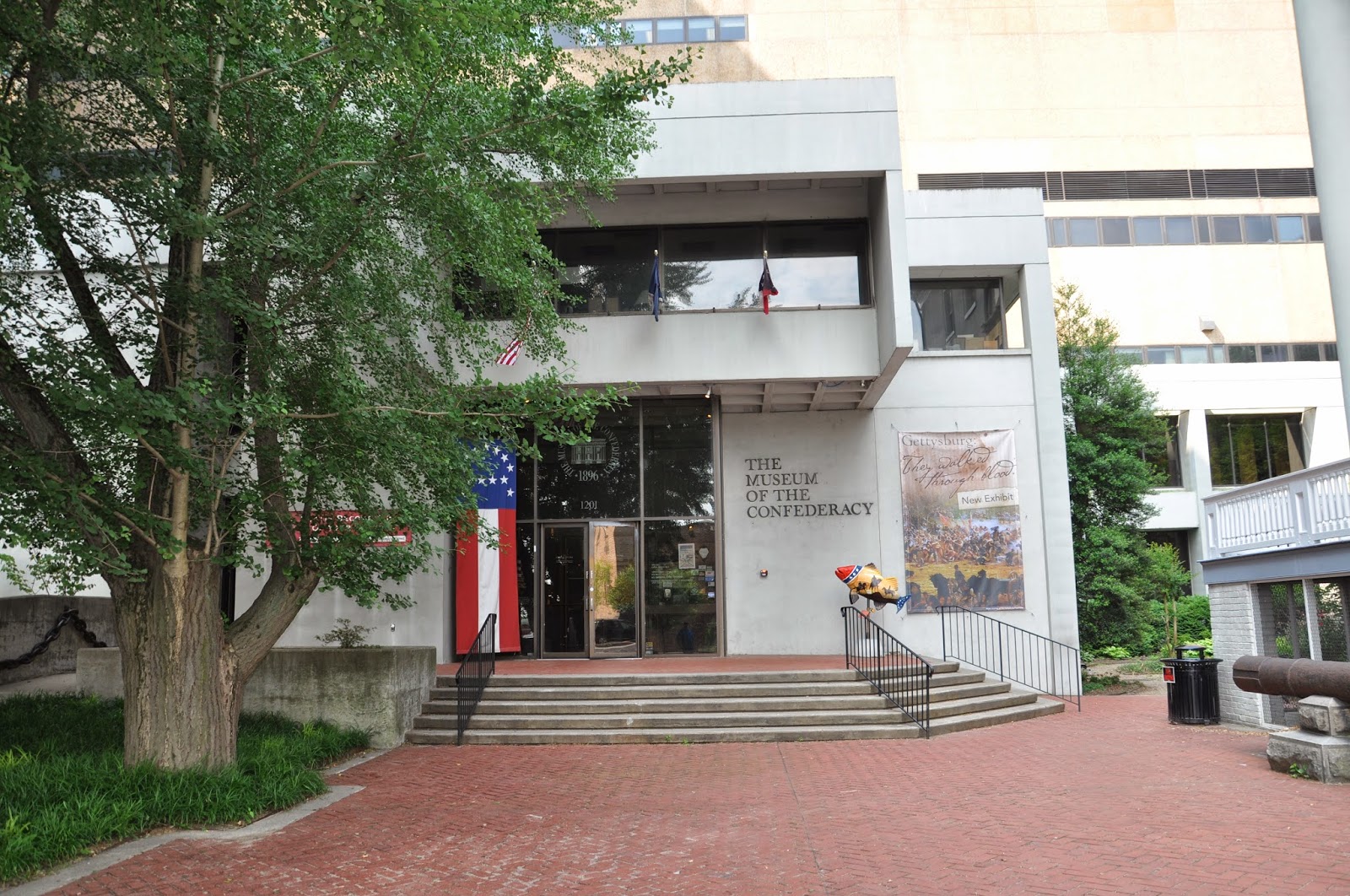 When we were on a segway tour of historic Richmond, I learned about the Tredegar Ironworks, so I'd put that on my list to visit if we could find time. 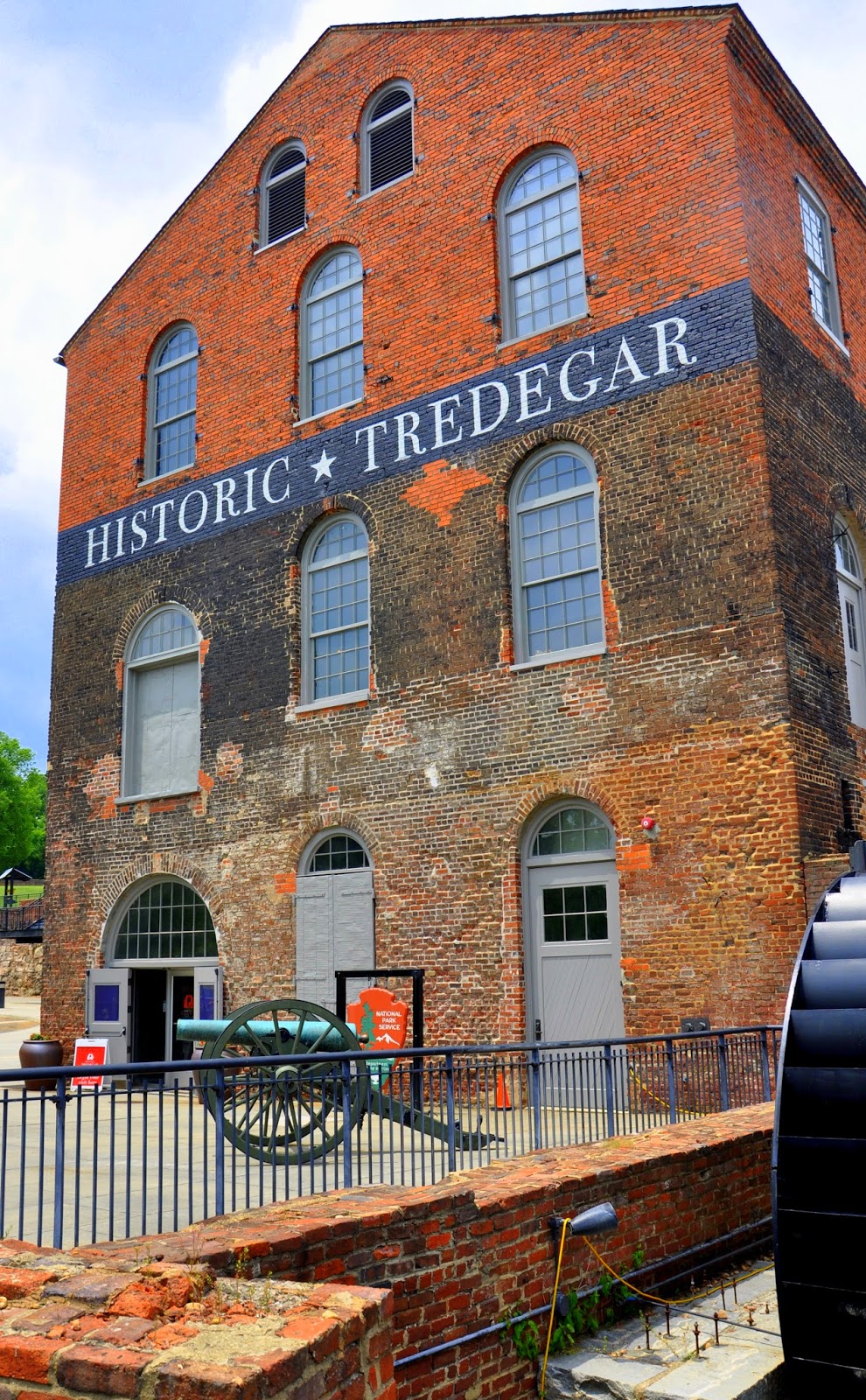 Doing all four museums on one day makes sense: They flow from one to the other. And it makes sense to do them in the order that we accidentally did: Touring the Museum of the Confederacy first gives you some background to appreciate Jefferson Davis, president of the Confederate States, and then you enter his home, the Confederate White House. From there, it helped us to step back and examine the Civil War writ large -- rarely is that an option when touring various Civil War battlefields -- and then focus back onto the Civil War in Richmond. Unfortunately, we didn't get time to get to the Richmond-area battlefields, so we'll be down to visit Richmond again! 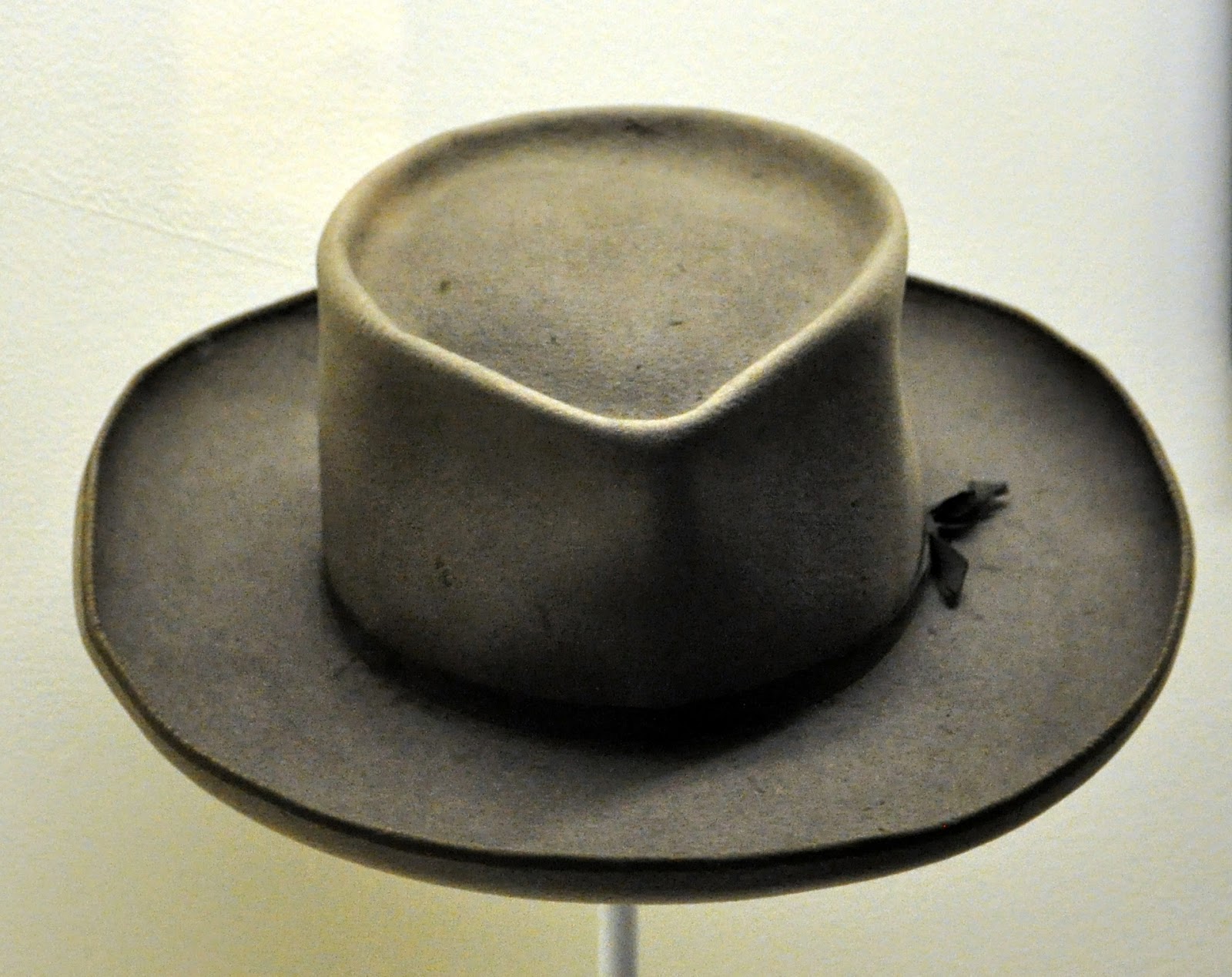 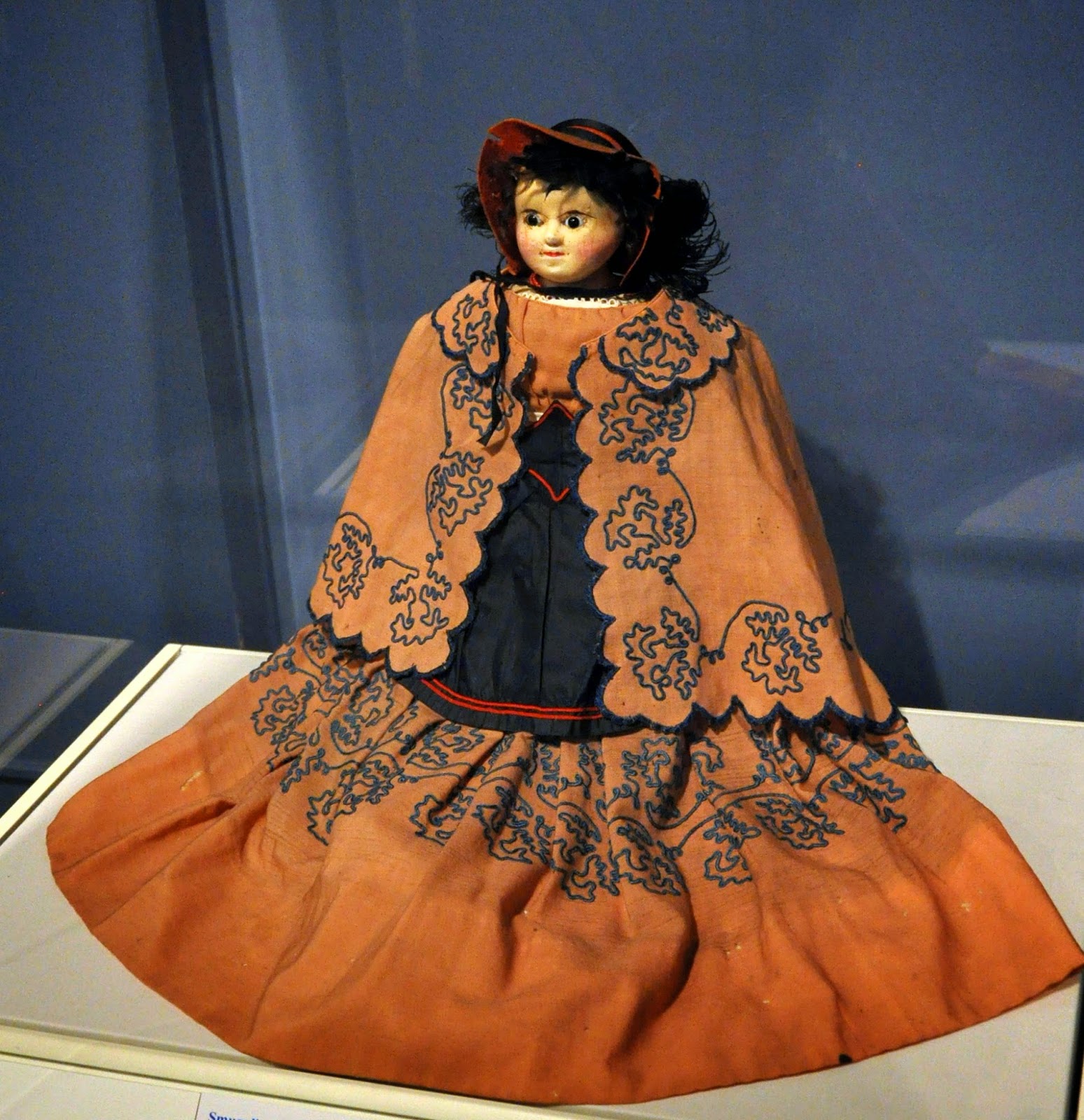 The Museum of the Confederacy is one of those static museums, with artifacts in display cases, so not the most engaging, although it's cool to see some of the items. The Museum of the Confederacy owns the world’s most comprehensive collection of artifacts and documents related to the Confederate States of America, in total more than 130,000 items. A vast majority of those items were donated directly from the soldiers and families who lived through America’s most defining era. It's interesting because some of the artifacts were interesting -- General Lee's iconic hat (which I tried to imagine him holding it and then putting on), a doll that had been used to smuggle in medicines to the South, among others. Unless you like to read every word of every label, 45 to 60 minutes is enough for this museum.

The Museum of the Confederacy traces its origins to the years immediately after the Civil War. Its ancestral organization was the Ladies Hollywood Memorial Association (LHMA), which formed in 1866 to tend Confederate soldiers’ graves in Richmond’s Hollywood Cemetery. In 1890, the LHMA rescued from proposed demolition the former Confederate executive mansion and turned it into a museum that opened in 1896.

I'd known all along that Southern views of the Civil War differ somewhat from mine, and had braced myself to deal with hearing the Civil War be called the "war of Northern aggression." I actually heard less of this name than the surprising third moniker for this great conflict: The Second Revolutionary War. But it makes sense that this was how the conflict was viewed, because it allows the Confederate States to continue to claim the likes of George Washington and Thomas Jefferson as its founding fathers. Viewing the Civil War through the lens of revolution enabled them to neatly side-step around treason (my personal opinion) and still venerate the Revolutionary War heroes.

Then we headed next door to the Confederate White House, the restored house that served as the executive mansion for President Jefferson Davis and his family during the war. Sadly, this mansion and the museum are overshadowed by the medical center buildings that loom over them.

Jefferson Davis, his wife, and children lived here from August 1861 until April 1865; this elegant antebellum house has been carefully restored to its wartime appearance, featuring all period artifacts placed around to make it look as if the Davis family had just left the room -- although not all the items were actually owned or used by the Davis family, they are accurate to Richmond during the Civil War. The period rooms feature Rococo-revival furniture, flocked wallpaper, silk upholstery, and Brussels carpeting. Robert E. Lee was a frequent visitor to the mansion, and Abraham Lincoln made a brief visit after the fall of Richmond.

The gray-stuccoed mansion has stood at the corner of 12th and Clay Streets in the historic Court End neighborhood since 1818. Home to a succession of wealthy families throughout the antebellum period, the mansion became the social, political, and military center of the Confederacy. While touring the mansion you learn not just about the period decorations, but also about Jefferson Davis's personal history.

He was more than "just" the president of the Confederate States of America, I learned. After the tour, I came out understanding his standing in the annals of American history -- yes, still a traitor, in my view, because although he didn't advocate seceding from the Union, once his state did, he was loyal to his state (although not the Union) and fought against the United States of America. But like many others of his time, he was a complicated man.

Before the Civil War, he served his country well. Davis was born in Kentucky to a moderately prosperous farmer and grew up on his brother's large cotton plantations in Mississippi and Louisiana. After he graduated from the U.S. Military Academy at West Point, he served 6 years as a lieutenant in the Army and fought in the Mexican–American War as the colonel of a volunteer regiment. He served as the Secretary of War under Democratic President Franklin Pierce (the knowledge he gained from that position undoubtedly helped the Confederacy as the states began seceding from the Union). He also served as a Democratic U.S. senator from Mississippi. An operator of a large cotton plantation in Mississippi with more 100 slaves, he was well known for his support of slavery in the Senate. He argued against secession, but did agree that each state was sovereign and had an unquestionable right to secede from the Union. When Mississippi seceded, he withdrew his loyalty to the United States of America. He expected to be tapped to serve the Confederacy somehow, perhaps as a general. Instead, he was offered the presidency, much to his own surprise. 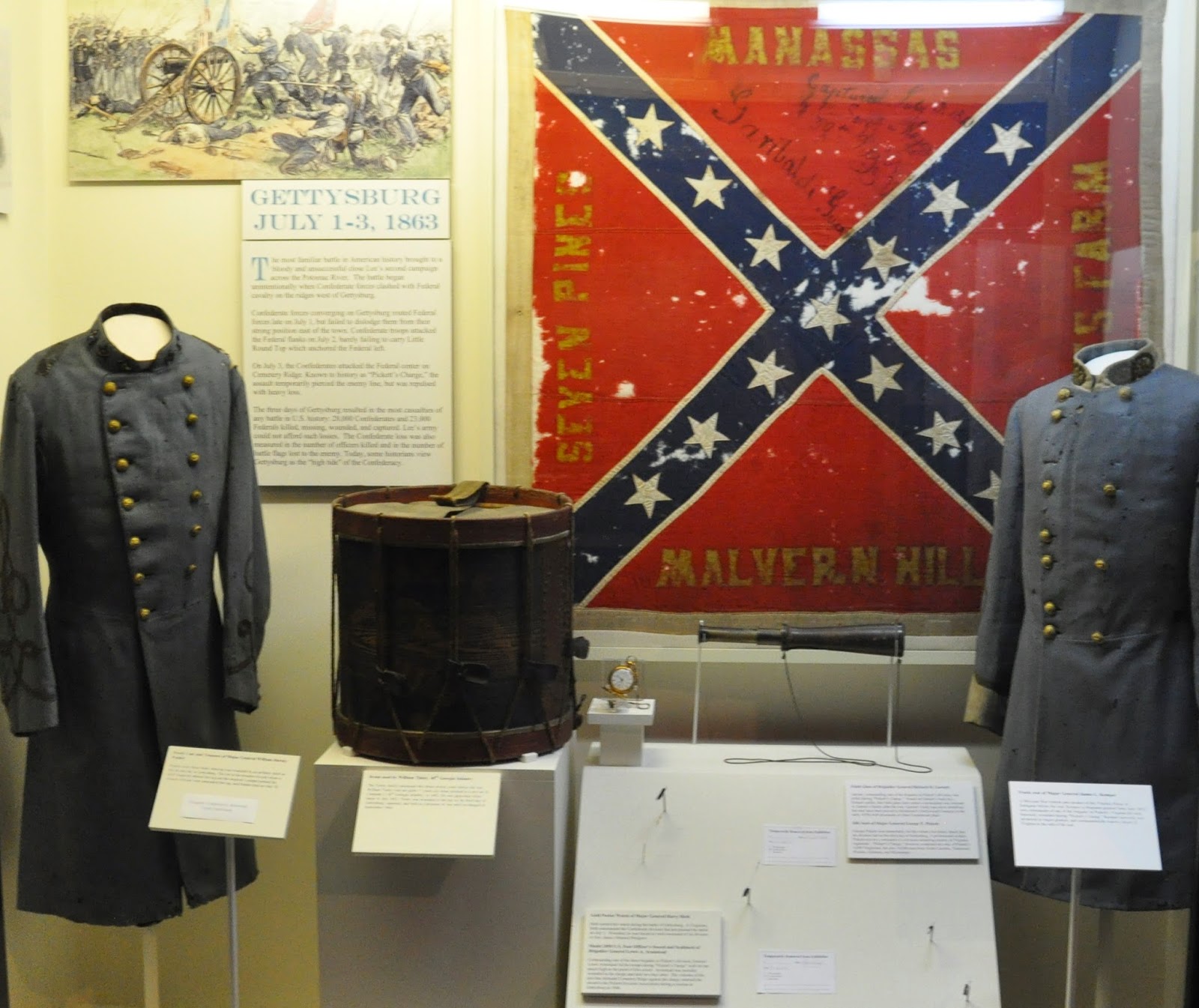 Where the North lacked in generalship, Lincoln made up for in leadership. Although the South arguably had the better generals, Davis proved to be a weak leader, and many historians attribute the Confederacy's weaknesses to his poor leadership. His preoccupation with detail, reluctance to delegate responsibility, lack of popular appeal, feuds with powerful state governors, favoritism toward old friends, inability to get along with people who disagreed with him, neglect of civil matters in favor of military ones, and resistance to public opinion all worked against him, and ultimately, was the undoing of the Confederacy. It's a rare leader that can rise above all those challenges. He was largely vilified during the years of the Civil War, which was ironic considering the veneration he's offered even now (see the recent post on Hollywood Cemetery).

After Davis was captured in 1865, he was accused of but not tried for treason and was released after 2 years. Davis wrote a memoir entitled The Rise and Fall of the Confederate Government, which he completed in 1881 and which helped restore his reputation. By the late 1880s, he began to encourage reconciliation, telling Southerners to be loyal to the Union. Yes, Jefferson Davis is an interesting figure.

From there, we headed over to the American Civil War Museum and the Tredegar Ironworks. The Tredegar site contains five surviving buildings illustrating the Iron Works era and focuses on the impact of the Civil War on Richmond. It's an interesting, although sparse, 30 minutes. I'm not sure how, but this is one museum that I wanted more from. The National Park Service operates the Richmond National Battlefield Park Visitor Center located in the restored Pattern Building. 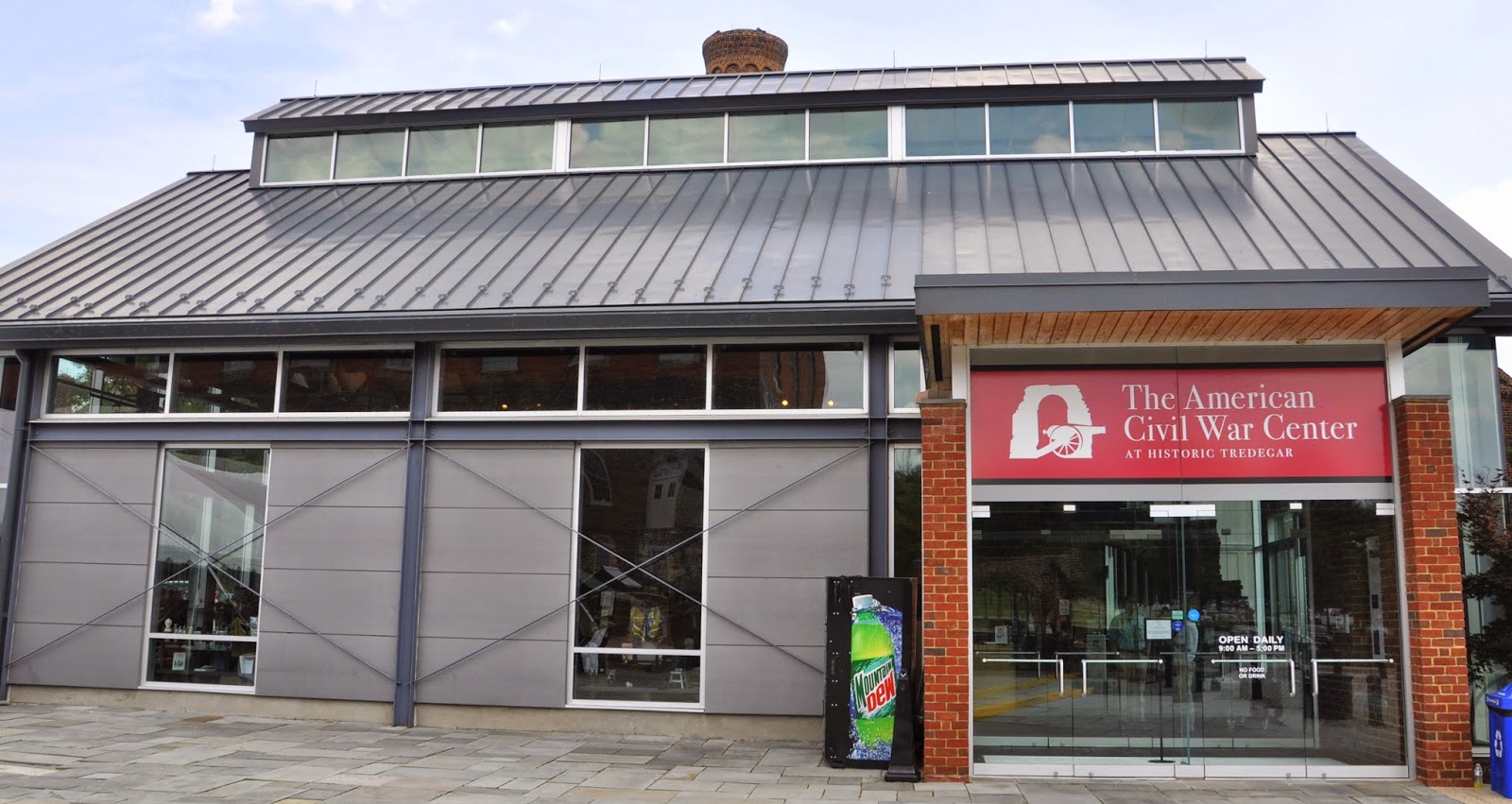 The American Civil War Museum claims to be the first museum dedicated to interpreting the Civil War from Union, Confederate, and African American perspectives. As you walk around the exhibits, you first explore the causes of the conflict, asking and trying out answers to questions like how did we get to that point? Was war inevitable? What were the soldiers on the field of battle really fighting about? One exhibit explored perspectives state by state. Then the exhibits move to exploring different perspectives during the war itself. Finally, the conflict's legacy is explored, including the Reconstruction Era and the lives of former Confederates.

This was a museum that invites thought. Most of the exhibits were presentations of different thoughts and views, rather than a collection of artifacts.