Pedal Through the Past: Biking through History 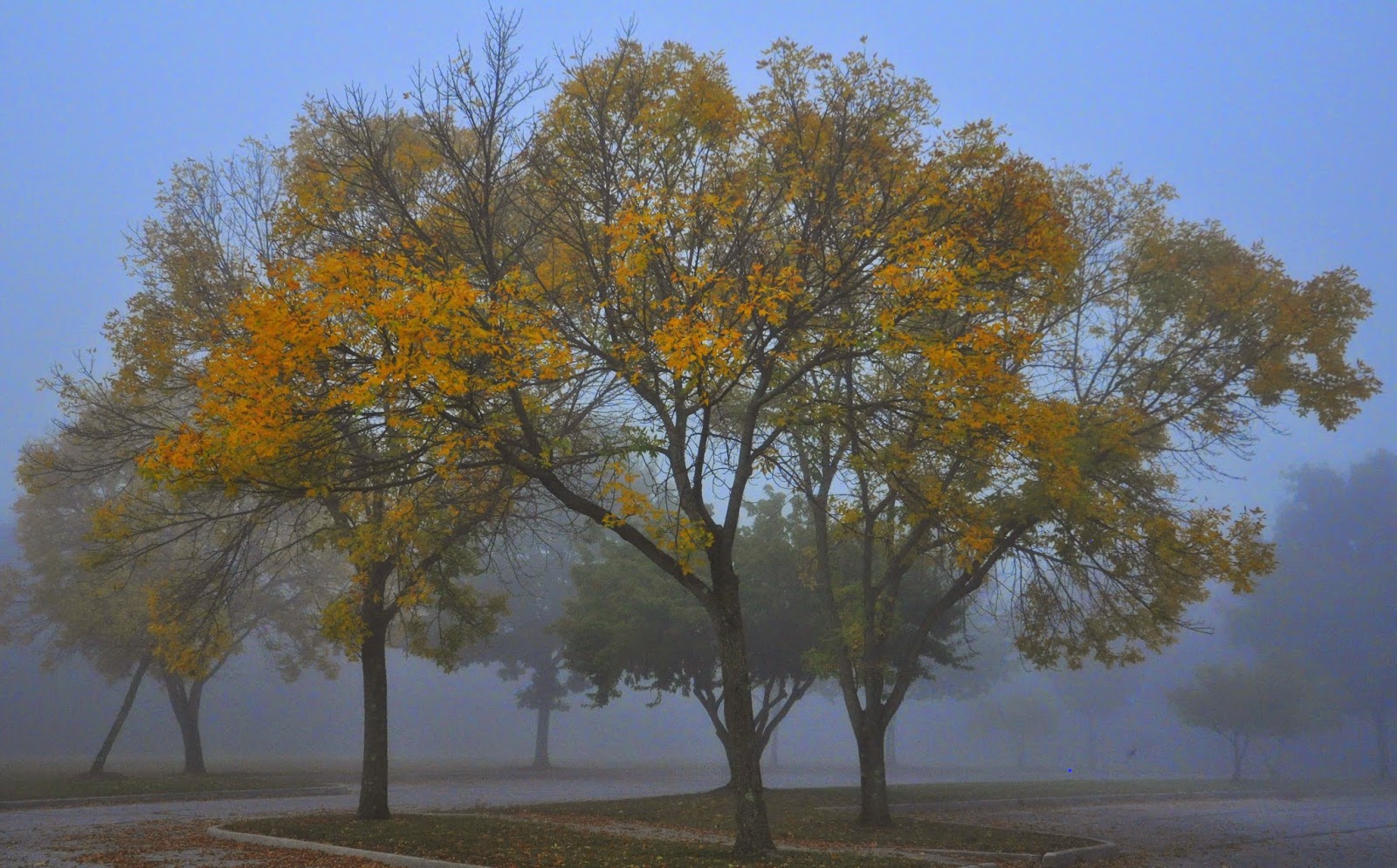 The prospect of biking through three national parks and two states in one day was intriguing, and doing so while gaining some insight into local Civil War history and heritage was almost too good to be true. That's what I was thinking as I signed my husband and I up for Pedal Through the Past bike ride, sponsored by the Harper's Ferry Historical Association and the David Larsen Memorial Fund last Saturday. The ride's theme was "4 years, 40 miles." 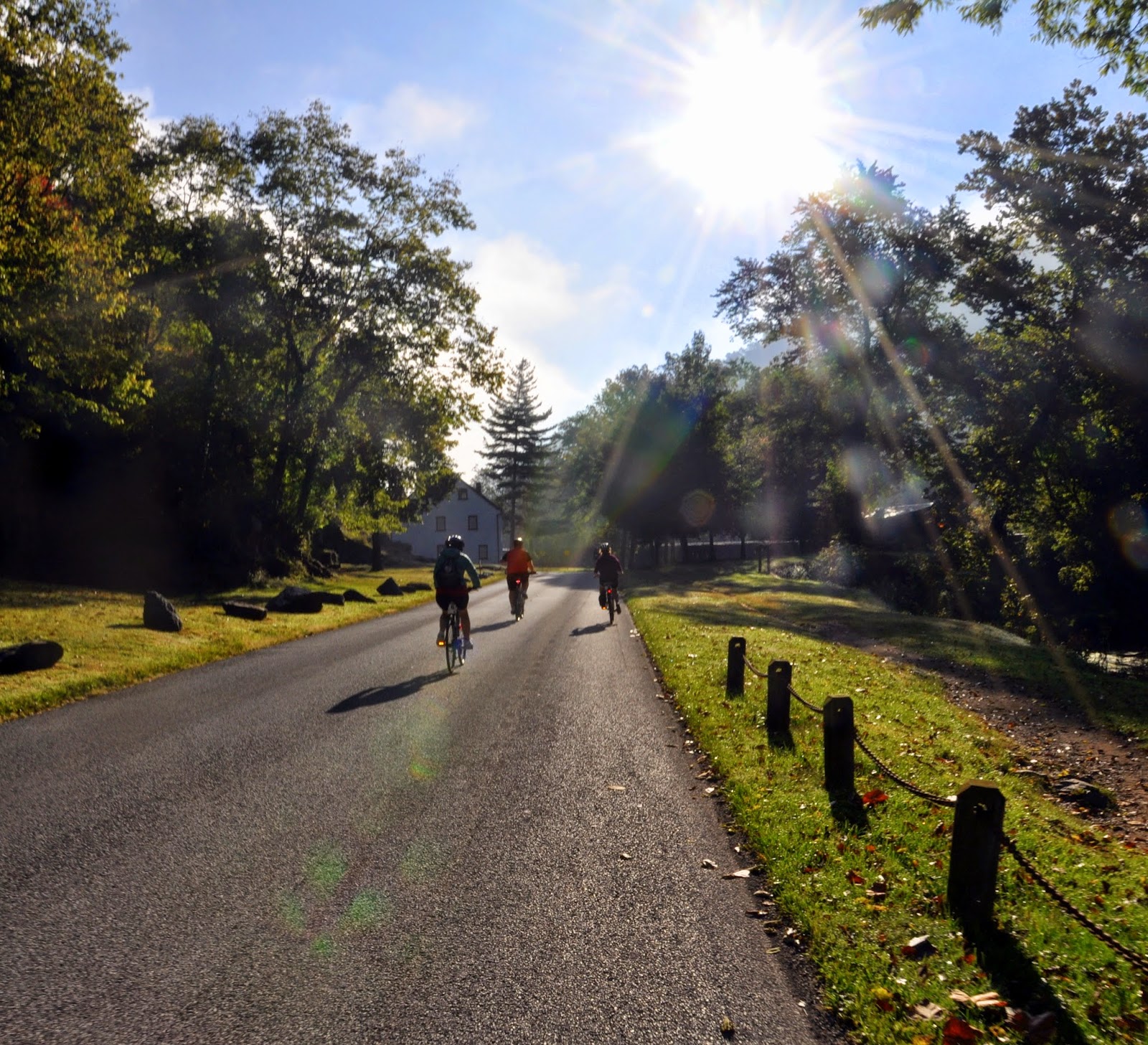 Although Harper's Ferry was enshrouded with fog at dawn (when we arrived in the Visitor's center parking lot), most of the fog lifted by the time the bike ride got rolling at 8:30 a.m. We saw deer skittering across the parking lot as we drove in, dark silhouettes that quickly disappeared in the dense fog.

To set the tone for the journey, we traveled downhill from the visitor's center into Harpers Ferry itself, to “John Brown’s Fort,” a controversial icon forever linked to Brown and his daring 1859 raid to end slavery. Scott Devers, one of the ride leaders (and organizers), discussed how the same United States that captured Brown and his supporters later assumed the role of Brown’s liberating army, which never materialized at Harper's Ferry. With Lincoln’s election in 1860 and the Emancipation Proclamation in 1863, Brown’s dream of an army marching to free four million enslaved Americans became a reality.

From there we headed down along the Potomac River further through Jefferson County, following a rough gravel road next to the old U.S. Armory canal, then through the River Riders campground and then back onto a paved road, Bakerton Road, which we followed up some pretty strenuous hills (three hills of the walk of shame for me, and several others) to Bethesda United Methodist Church. (A special call-out of thanks and appreciation to the members of Bethesda UMC for allowing us use of their restrooms!) Although the ride description suggested that there were two routes, a 40-mile ride for more experienced (and fit) riders, and a 31-mile ride, with "gentle hills," both routes followed the same hilly route up to Shepherdstown from Harper's Ferry, and those hills got the better of me! 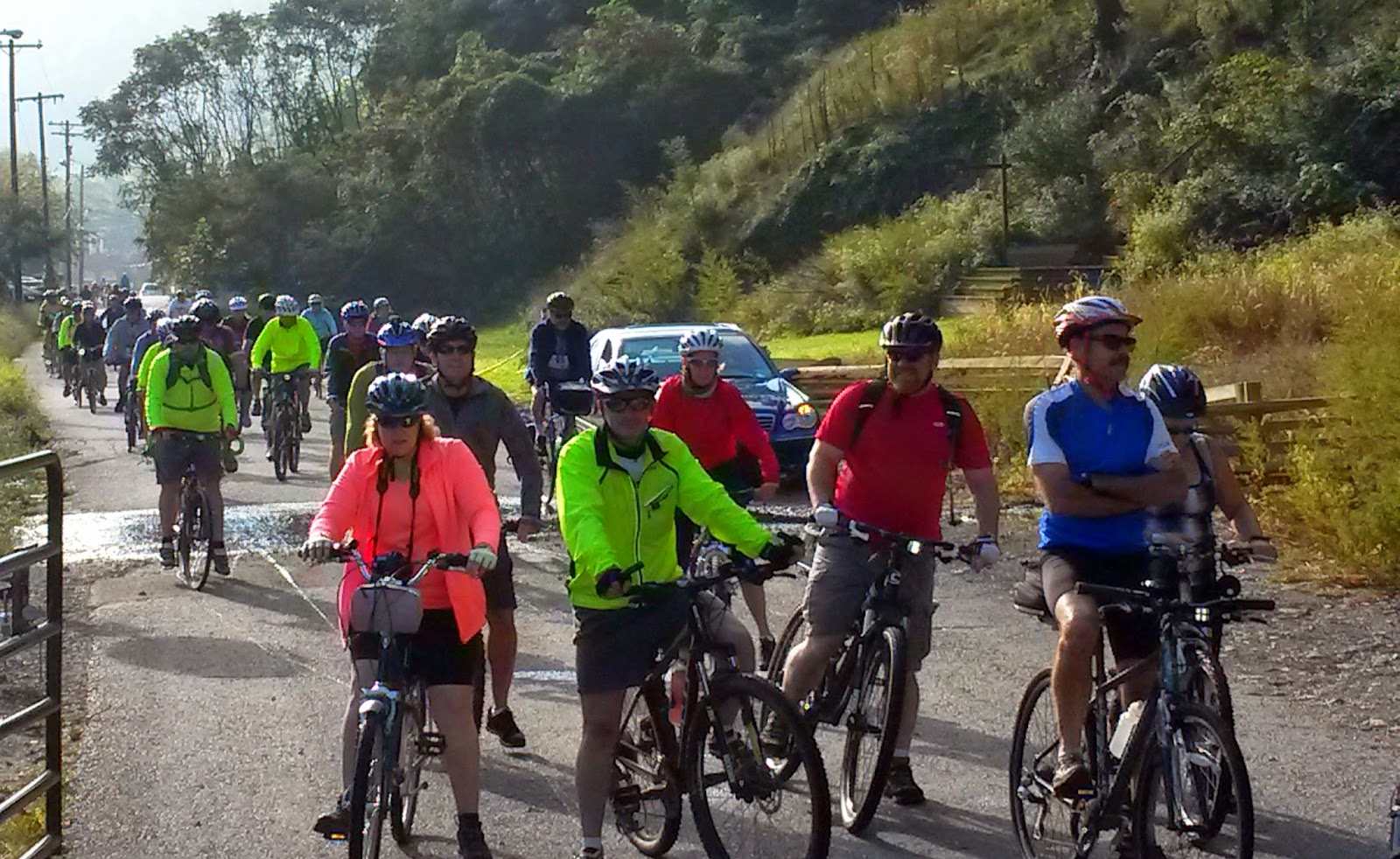 The road and scenery were beautiful, however, and we couldn't have asked for better weather. There's a different feel to riding/walking it than driving through, enclosed in a vehicle (even if the moon roof is open). And I noticed things I might not have if I were riding in a car -- which is part of the joy of riding a bicycle. Not only are the ups and downs more noticeable, but there's simply more time to appreciate what's around. A flag waved gallantly from a tree branch high over the road. And on the left, later on in River Road, we passed an old toilet, sporting brightly colored mums, that made me chuckle. That was part of the organizer's goals: to ensure we experienced the places we rode past in a way we wouldn't have been able to from a car window. So despite those hills and lagging behind the main group, we ended up seeing and experiencing things we would never have done on our own.


Jefferson County’s pre-Civil War free and enslaved African Americans played a crucial part in powering the early 1800s industrial period; water-powered canals, river boat transportation and cement milling were all achieved through enslaved labor. At a stop along River Road, along the Potomac River, we heard about the importance of the cement factory and its connection to the Battle of Shepherdstown.

From there we rode through Shepherdstown, across the Potomac over to Ferry Hill Plantation on the Maryland side. Ferry Hill sits above the crossroads of the Potomac River, the C&O Canal, and the "great road," now known as MD Rt 34, or Shepherdstown Pike.

The community that grew as a result of the ferry, which had been established in 1755, became known as Bridgeport, located directly across from Shepherdstown. During the Revolutionary War, the ferry served the Continental Army, and continued to operate until a covered bridge was constructed in 1849.

John Blackford acquired interest in the ferry and adjoining acres through an inheritance from the Van Swearingen family when he married Sara van Swearingen in 1812. Looking for an ideal location to build a home and start his family, he decided to build the house high on the bluff overlooking the Potomac River, on the plantation appropriately known as Ferry Hill. Blackford could sit on his front porch and monitor his two slaves, Ned and Jupe, as they ran the ferry down below.  (For more about Ned and Jupe, or information about all the stops, please click on the link to the youtube videos, below.) The plantation consisted of some 700 acres of farmland, a tavern, and the ferry. Blackford also supported the building of the C&O Canal, which crosses his land. Both Union and Confederate forces occupied the mansion during the Civil War, taking turns of course!

The lunch stop was at Ferry Hill Plantation, generously sponsored by Chick-fil-A, Cannonball Deli, and Potomac Grill, with sandwiches, cookies, chips, and sodas, Gatorade and water.

Several employees of Phoenix Bikes, based in Alexandria, VA, provided valuable support to many of the riders, including me, so another call out to them as well! Going up one of the first hills I tried to shift down (into "granny gear") and my chain got hung up, and that pretty much squelched any hope I had of climbing that hill -- not that I believe I would have gotten all the way up anyway, but I might have gotten further up. That problem plagued me until the lunch break, when I asked 17-year-olds Ever Franco and Noe Cuadra (with adult mechanic Paul Wilee) to take a look. It turns out my derailer hanger was bent, and that was causing the chain to hang up when shifting. They did their best to straighten it again, and indeed, I was able to change gears much more smoothly the rest of the ride.

After lunch, those who wanted the shorter, 31-mile ride split off from the rest of the group to head across Rt 34 to the C&O Canal at Lock 37 (mile marker 72), to head 12 miles back down the tow path to Harper's Ferry, while the rest rode on into Antietam. Having explored Antietam before as part of a leadership class at work, I wasn't heartbroken at skipping it, and that was the right choice for us. I looked forward to spending more leisurely time on the tow path.

The tow path was lovely and cool, almost fully shaded, and wasn't very busy until we drew closer to Harper's Ferry at mile marker 60. After the morning segment of the ride, I was grateful for both the shade and the almost imperceptible decline. Lots of stops for photos and to fix a flat tire helped soothe muscles already beginning to ache. As usual on the tow path, we saw a lot of birds, including a bald eagle and several heron. We checked in with the ride organizers at the end point in front of the historic railroad station and then we ended our adventure with a lovely early dinner at one of our favorite cafes in Harper's Ferry. 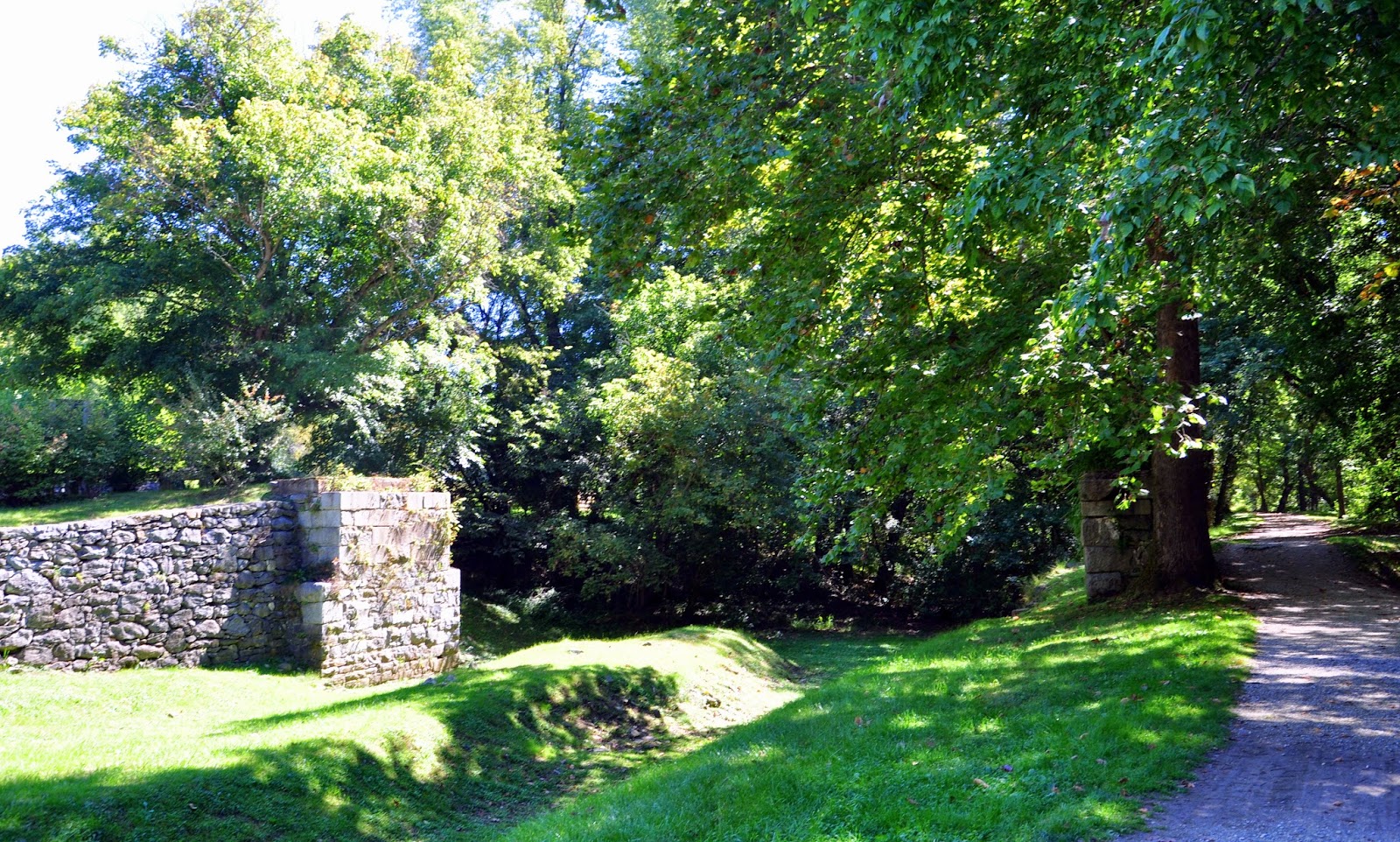 The ride would never have been started if it wasn't for David Larsen, an avid cyclist, and the David L Larsen Memorial Fund. David Larsen was an innovator who believed in sharing National Park resources with others, and championed engaging the public with the larger meanings and relevance of tangible cultural and natural resources, such as historic places like the remnants of the cement factory, the C&O Canal, and the national battlefields. His believed in making sites more relevant to diverse audiences. When thinking of a way to honor Larsen and raise funds to support internships, the Memorial Fund thought of combining a bicycle trip with his passion for the past.

The ride organizers are already at work planning next year's ride, including possibly designing a more beginner friendly, flatter, 25-mile loop, according to Devers. I whole-heartedly support the idea of a ride meant for more casual, recreational bike riders.

Their vision for the future of the ride is ambitious and compelling. "We believe that in the future, when we attract hundred of riders to this event, there will be riders who will enjoy the history videos on their smart phones, Melinda Day, one of the organizers and an employee of the National Park Service, said.

Riders, she envisions, "will be able to move over the historic landscape at their own pace and when they reach a place where a story happened, stop, go to the videos on youtube on their smart phones, and see a local history expert in the video, standing in the same location, and hear the story and see images of people long gone who helped shape the history of our counties."

I'll definitely keep a look out for next year's ride -- the 25-mile option!

Know before you go #1: If you intend on doing this next year, make sure you've got a decent hybrid that can take road or unpaved trail!

Know before you go #2: If you're interested in riding it and hearing the history discussions, check out the "4 years of history" digital videos loaded up on youtube. at this link. http://www.youtube.com/watch?v=MUEs8TBkhdE&list=PLeSAsi1Am6Ruk47k-az5xIJql_niqt1nS

Other sponsors of Pedal Through the Past include Jefferson County, the Trail & Town Alliance of Harpers Ferry and Bolivar, the Harpers Ferry Historical Alliance, the National Park Service, and AC&T. 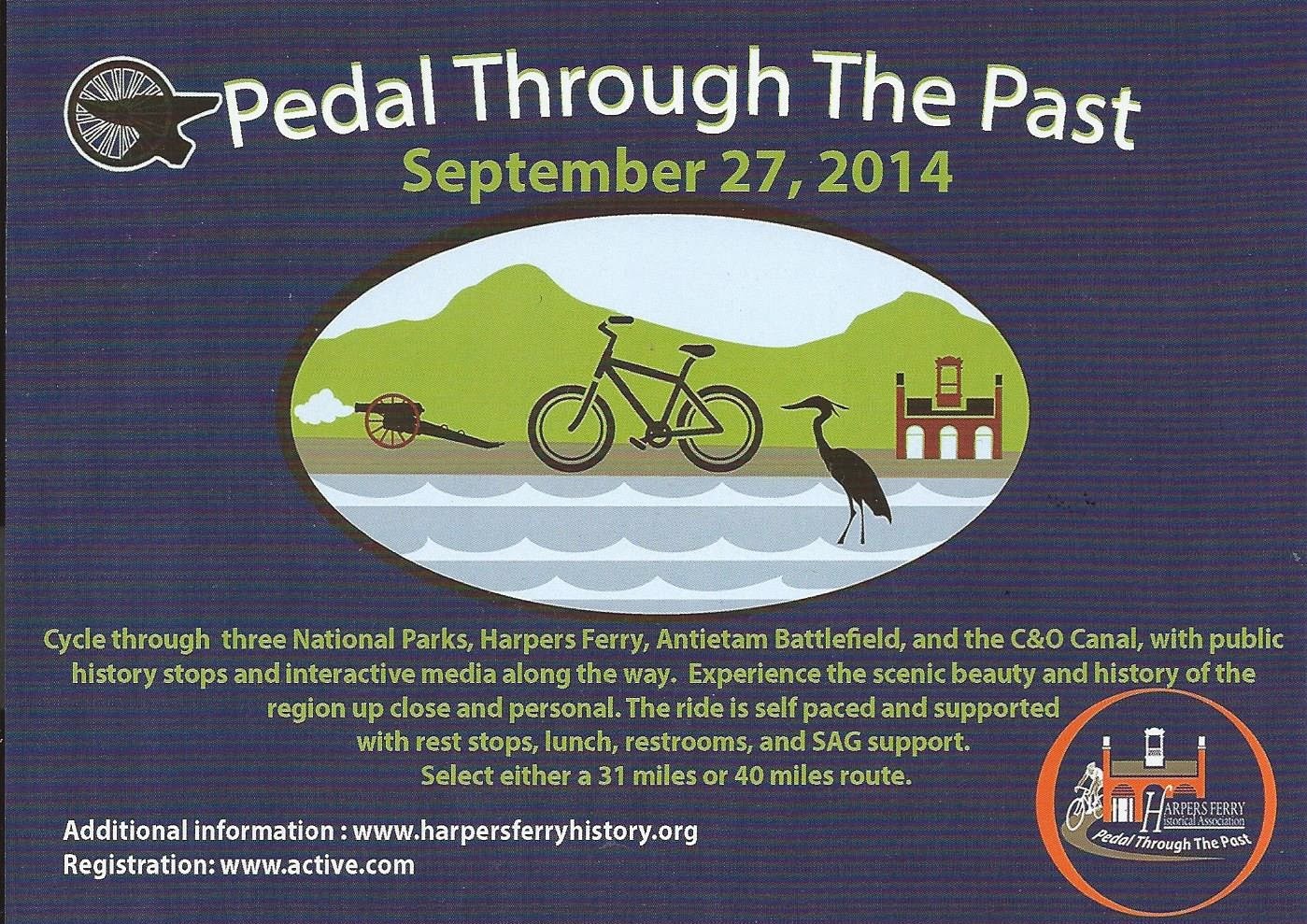