Working in the Coal Mine! 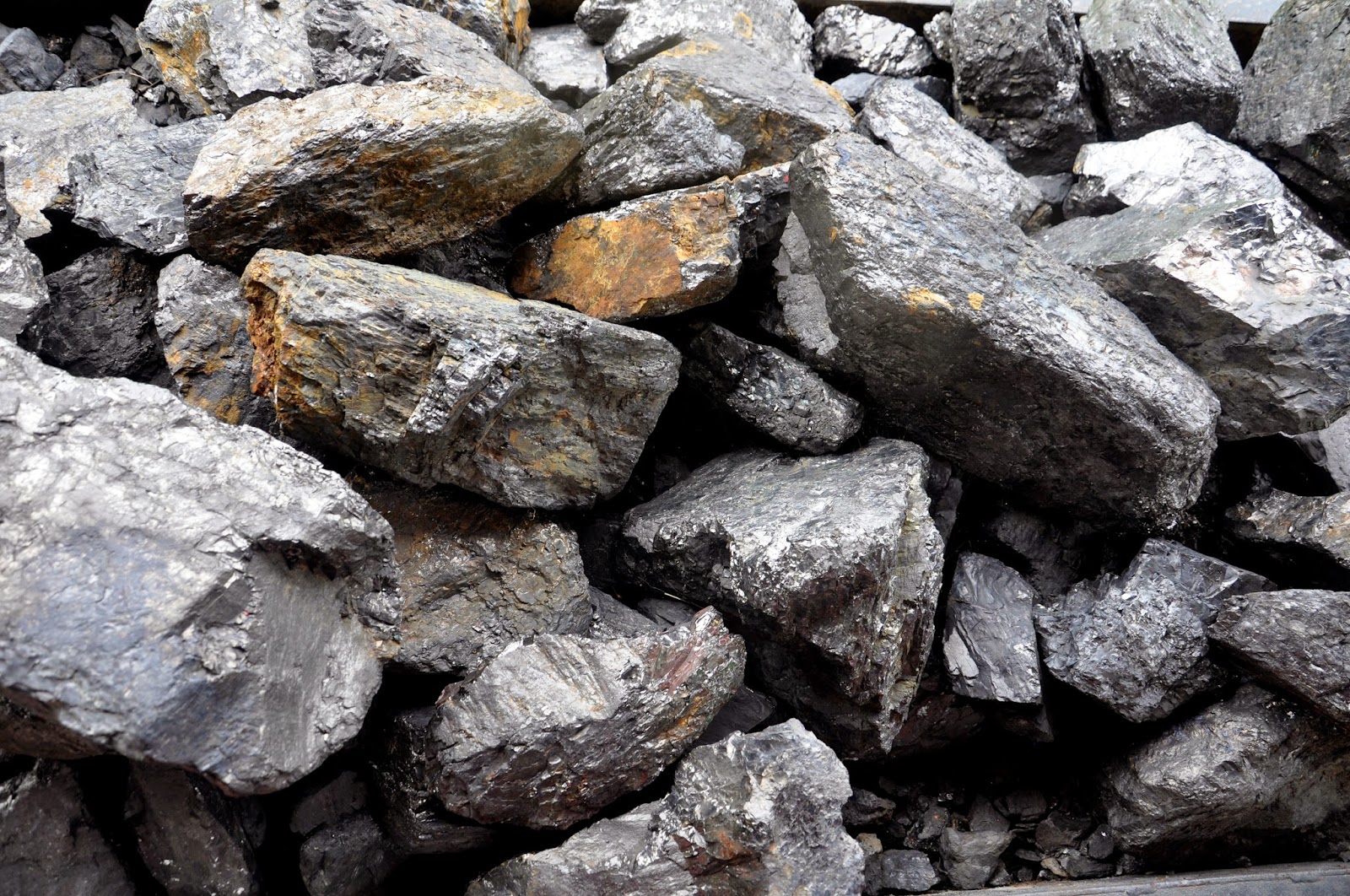 Coal fired America's Industrial Revolution, and helped shaped the country we live in today. Anthracite coal was the heating and iron-making fuel of choice, and Pennsylvania’s coal mines, which produced anthracite coal, thrived in the late 19th and early decades of the 20th century. 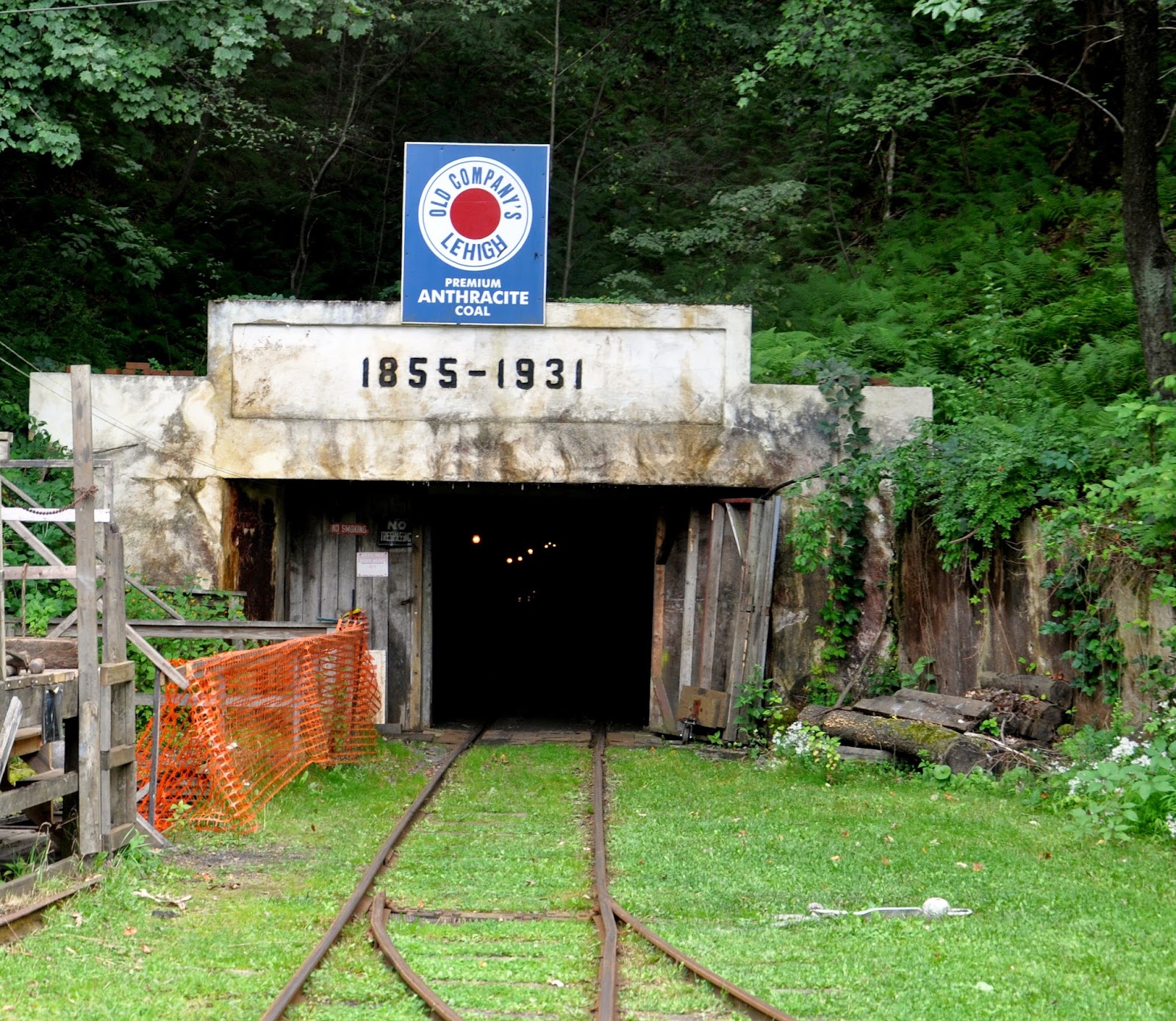 To fill all the jobs necessary to mine coal, companies employed thousands of boys, some as young as 7 or 8, as well as men of all ages. Despite laws prohibiting the employment of children under the age of 14 for industrial work, families willingly sent, and companies willingly employed, young boys. Not only did full-time work prevent these children from obtaining an education, they were subjected to harsh and dangerous working conditions that killed or permanently injured countless numbers.

I was so glad I brought my two sons to tour a coal mine. Opened in 1855, No. 9 Coal Mine, located in Lansford, PA, is the world's oldest continuously operated anthracite coal mine. It closed in 1972 and the opening was concreted over, only to be re-opened as a heritage tourism attraction in 2002. Today visitors ride by train 1600 feet into the mountainside, to see and experience first hand what it was like for miners to work underground. 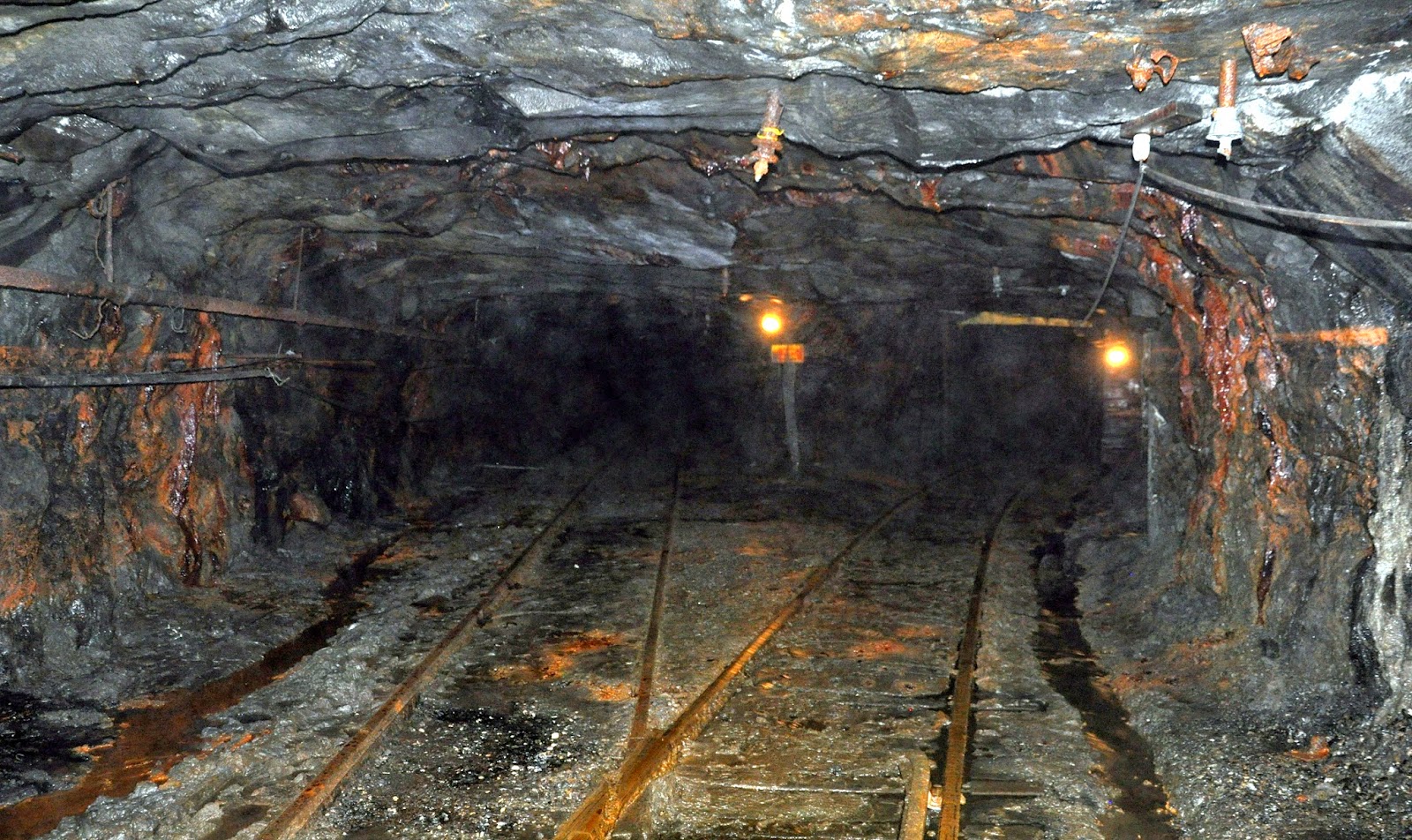 This is a great tour for the family to see what a real underground coal mine looks like. We arrived on Labor Day Monday. I'd checked the website, but only to note that the first tour is offered at 11 a.m. I didn't notice where it said it wasn't open on Mondays. Although the volunteers who run the museum were busy setting up for a picnic honoring their volunteers, they cheerfully offered to let us tour the museum and the mine itself. They noticed that we had our dogs with us, and suggested that instead of one of us staying with the dogs in the car, we bring our dogs with us into the mine! They really went out of their way to accommodate us and make the experience memorable! 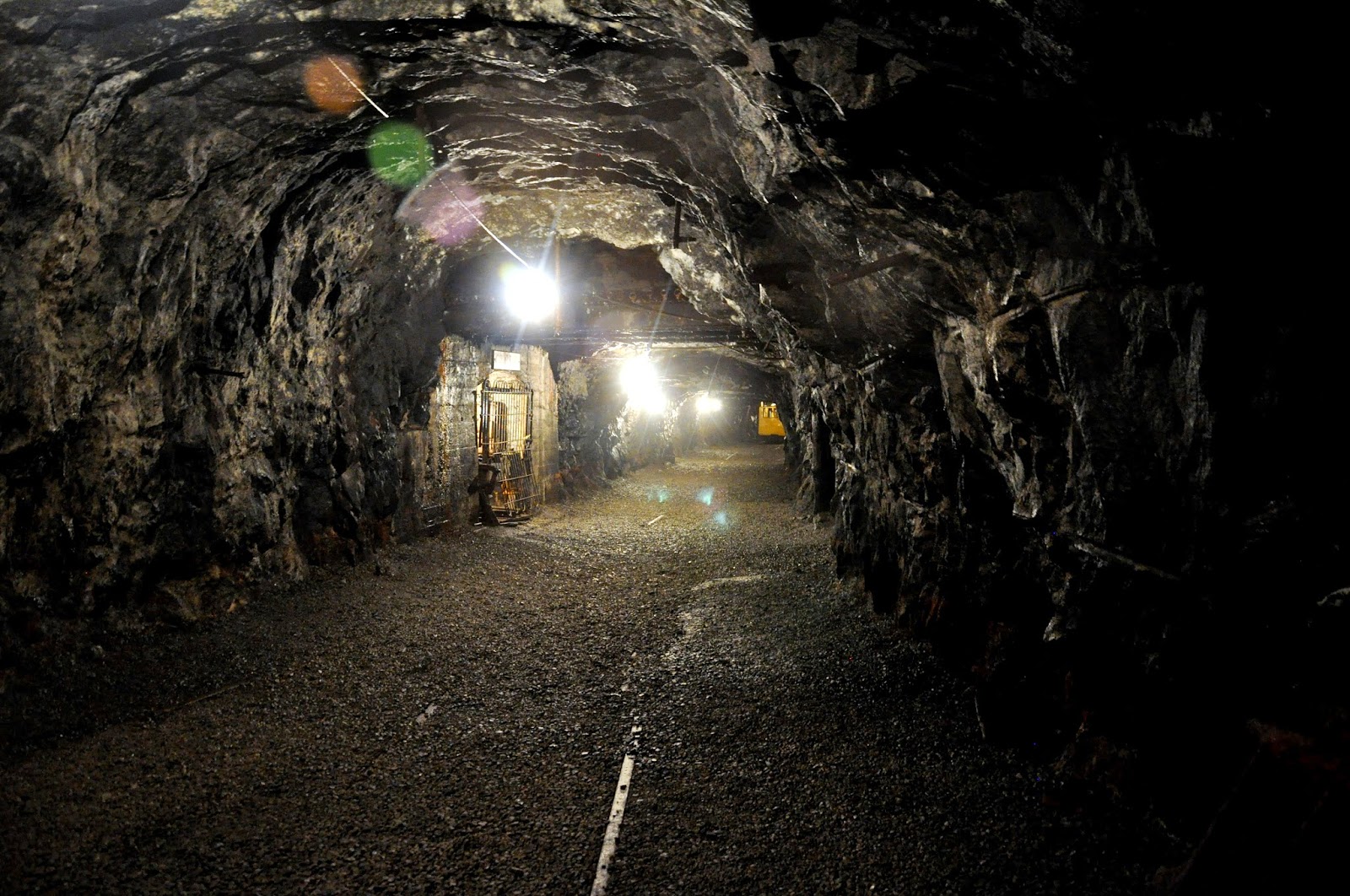 The tour begins with boarding a train to ride 1600 feet into the mine, and then it becomes a walking tour from there. During the tour, we learnt a lot about the coal miner's working conditions -- 16 hour shifts, barely ever seeing daylight, except on Sundays, incredibly dangerous working conditions, laboring for companies that valued their mules more than men's lives. And the darkness within the mine -- hard to imagine the pitch black closing in on you, with only a flickering candle to combat the darkness. There was more light for us in the mine than the miners had when they actively worked it. What was so heart wrenching was that many miners, after paying rent and purchasing food items at the company store, would find themselves OWING their employer more than their salaries. No sick days, no vacation days -- they were essentially slaves.

Our tour guide, Chris, noted that he was the latest of six generations of his family to have worked in the mine, although he works as a tour guide. He's proud of his heritage and to share with visitors the mine that his father and grandfather toiled in. He told a lot of stories passed down from his family and from other former miners. After each story, he would turn to my sons, who were the only two kids on the tour that day, and ask "so, would you rather work in the coal mine or do your homework?" At first the two boys were cocky, and said, "work in a coal mine," but as the tour went on, I noticed that eventually they admitted that going to school and doing their homework was indeed a better option. 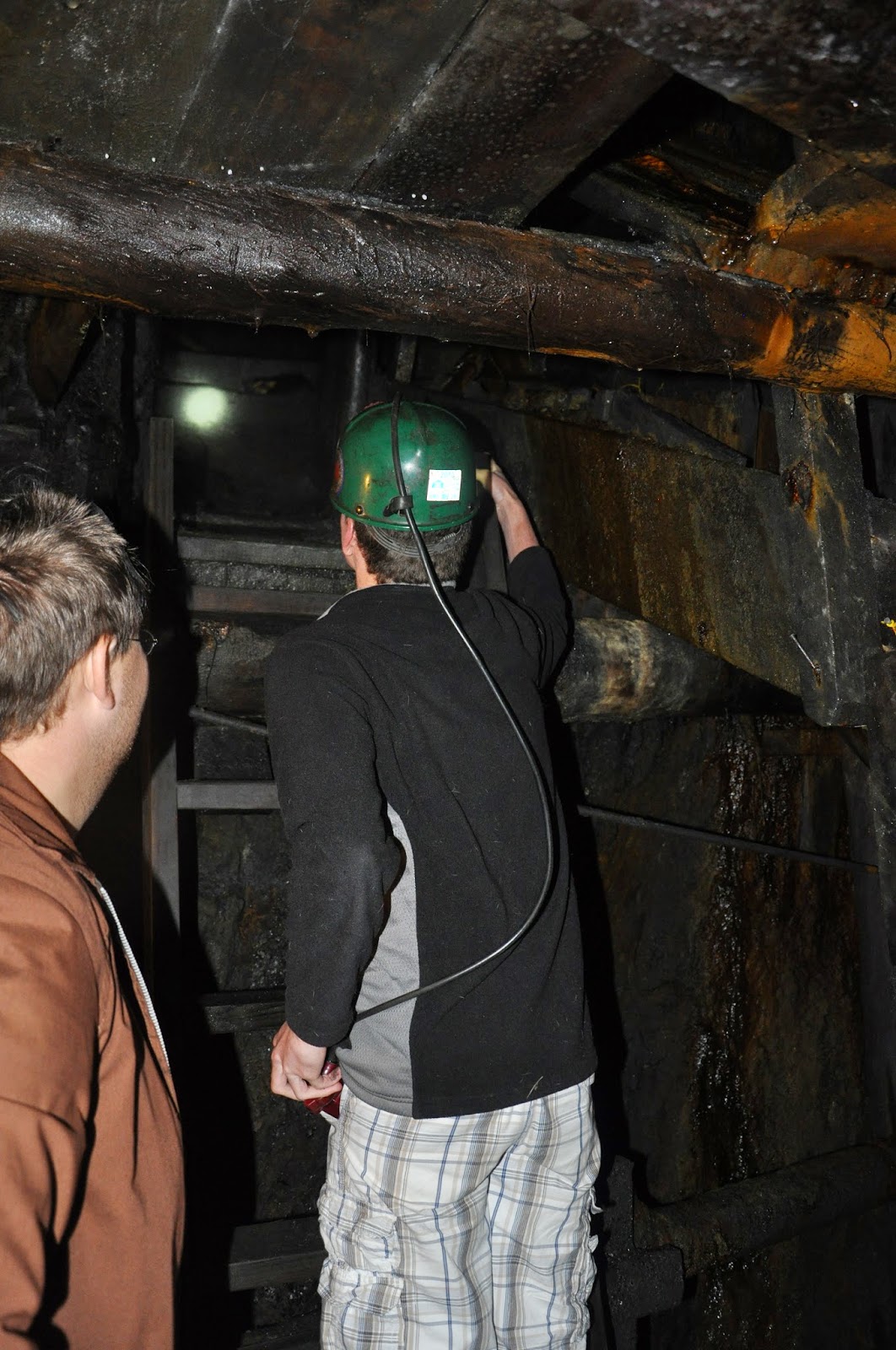 Chris tossed his hardhat to my older son and invited him to crawl up into a "man hole," a tunnel chiseled out diagonally upward into the stone to allow coal miners to excavate coal from seams. He did, and came out, predictably, filthy!

Chris said that over a thousand men and boys might be working at any given time. Because the tours are VERY quiet, it's hard to imagine the din that all those men and all that machinery, the trains and the mule carts, must have created. Darkness, chaotic noise, damp and chilly working conditions -- it sounds like hell to me. It's worth noting that the mules, which lived within the mine itself while they were working, were rotated out every 6 weeks or so, to spend a few weeks grazing in a pasture, recovering from their time underground.

The museum collection was interesting -- lots of artifacts from workers and the labor union helped tell the story of the rough lives of the workers and their families. It didn't have the sterile feel of the typical artifact museums.

Companies often designed and constructed industrial communities to house their employees in close proximity to the collieries for which they worked. Such mining towns were built to attract other mining families to live and work among the coal fields of northeastern Pennsylvania.

A nice companion tour to 9 Coal Mine is Eckleys Miners Village, about an hour north. It is a community, or coal “patch town,” which provided mining families with the basic necessities such as housing and medical care, as well as basic amenities like a store, a school, and churches. 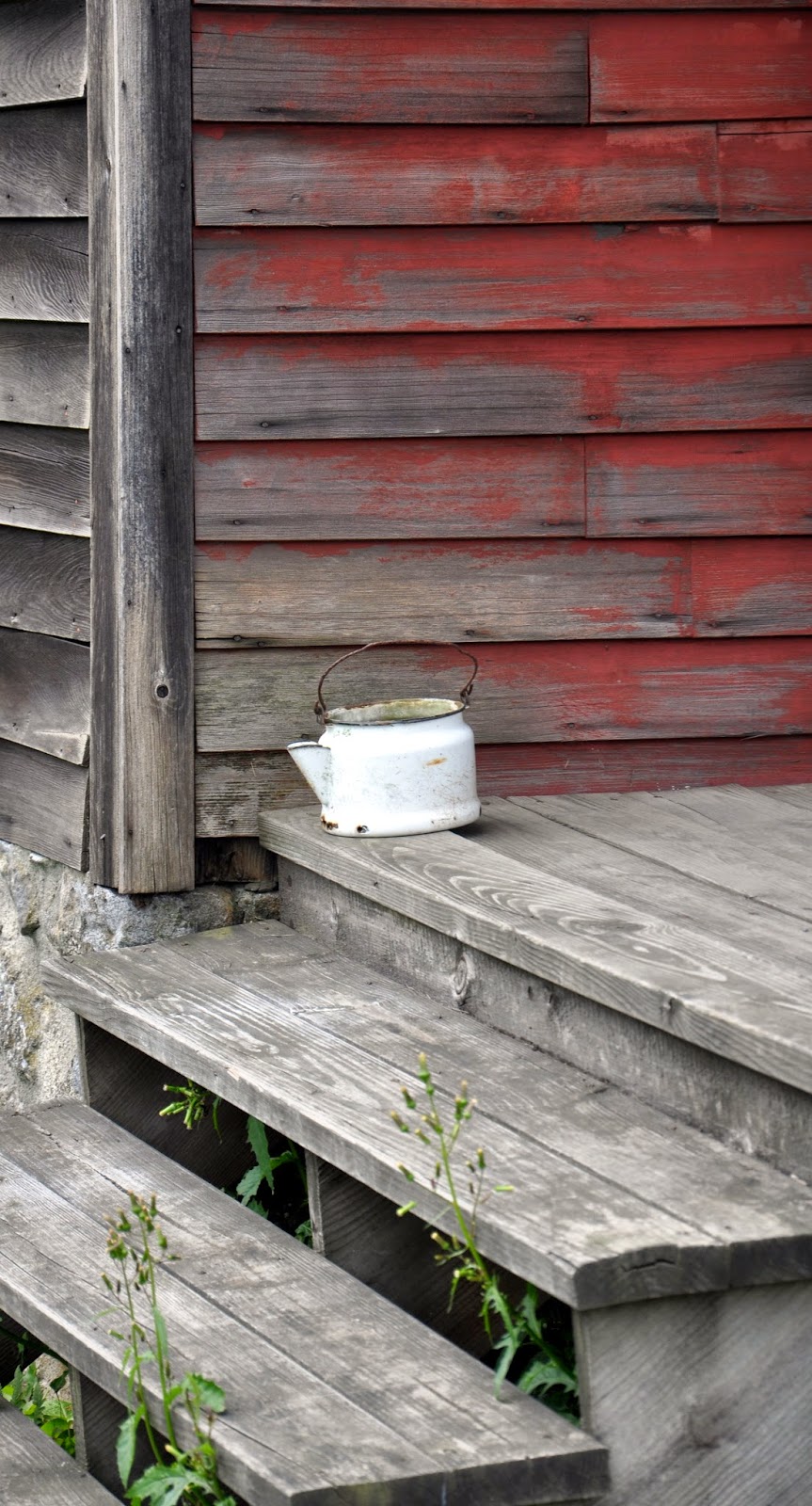 Many immigrants who came to America hoped to work in the mines just long enough to save money, buy land, and return to the farming lifestyle they had known in Europe. However, once they became part of the company-owned system, very few were able to escape the years of poverty and hardship that faced them.

The story of the Eckley village and the people who lived and worked in it is one of dynamic economic and social change. Beginning more than 160 years ago, it exemplified the clamor and conflict of the anthracite coal industry.

Large families lived in the duplexes, often with boarders, as single men were not allotted houses. Women raised the children and tended the gardens -- there was plenty of space around each duplex for the family gardens. The produce from the gardens supplemented the food purchased by the miner's meager salary. From the 9 Coal Mine, we learned that often male children would also work in the mines, even as young as six years old, as mule tenders. By the time the boys were 13 years old, they'd be ready to take up mining proper. By 16 they'd be married and starting families of their own, and, Chris said, by their mid-30s or 40s they'd be broken or dead. Women had lots of children, hoping for boys. If anything happened to the breadwinner -- injury that prevented a return to the mines or worse, death, which was pretty common in an era that cared more for mules and machinery than for human life -- boys working in the mine could justify the family staying in the house. It was a hard life, and no guarantee of having anything at the end of a career in the mines. 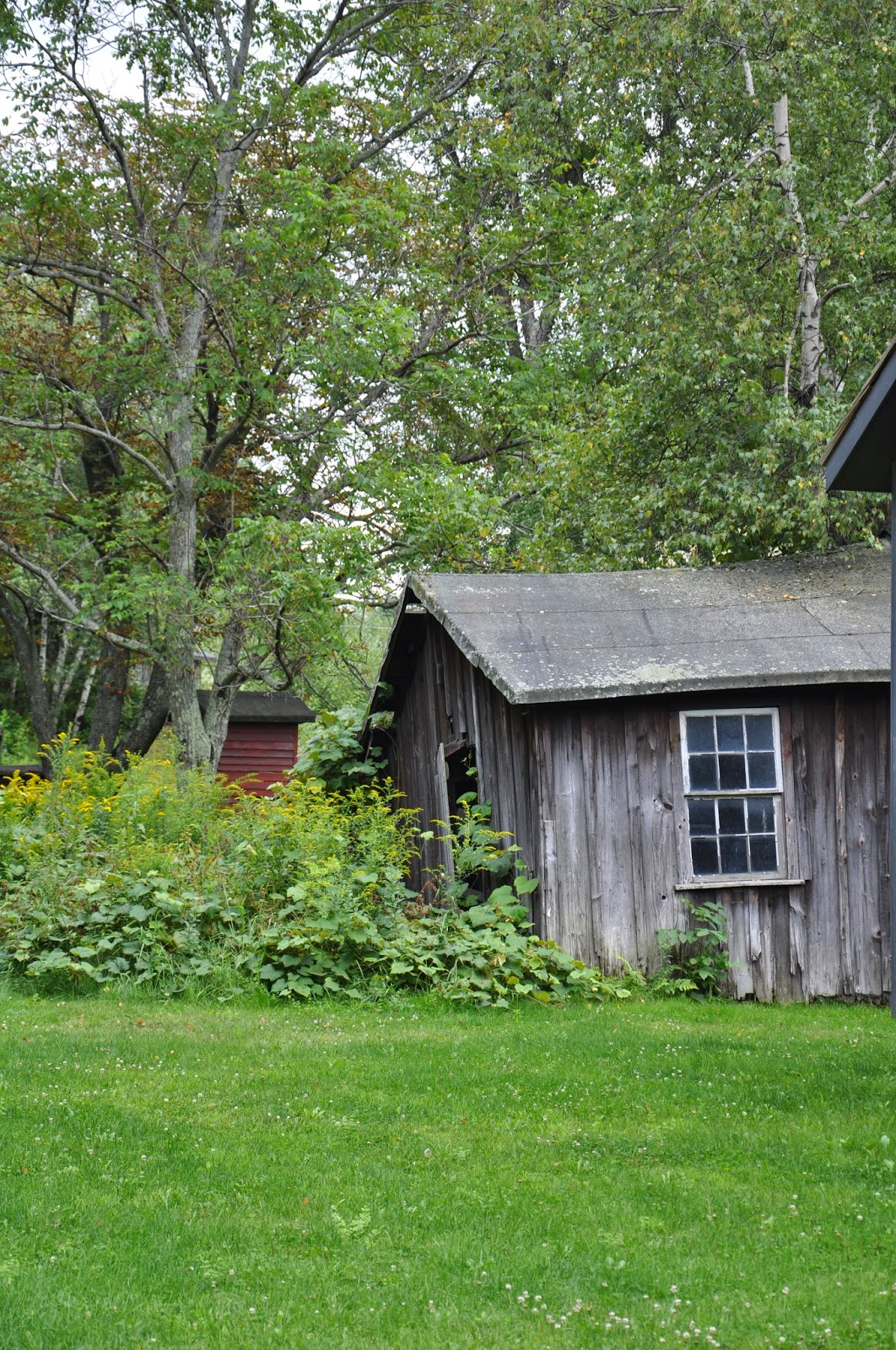 There's a small visitor's center there, which has artifacts from the village. The village was preserved because it was privately owned by the coal mining company. In the 1970s it was purchased as a set for "Molly McGuire." Afterward, it was donated to the Pennsylvania Historical Commission and eventually opened as a museum. The village now consists of a single long street, along which churches, miners' homes, the company store, and the doctors and owners' houses are situated. Although we didn't stay for the walking tour, I recommend taking it, as it brings you into some of the buildings, which are closed otherwise.

Know before you go #1: Dress appropriately for The 9 Coal Mine and Museum. Bring shoes for walking on rough gravel -- leave the flip flops and pretty shoes (it's also dirty, i.e., a coal mine) at home. It's 54 degrees in the mine, all year around, and very damp, so bring a jacket or wear long sleeves.


Know before you go #2: Bring cash for the 9 Coal Mine. And no, there's no ATM machine. And bring some small bills with which to tip your tour guide. Please be patient -- this museum is run by its volunteers! 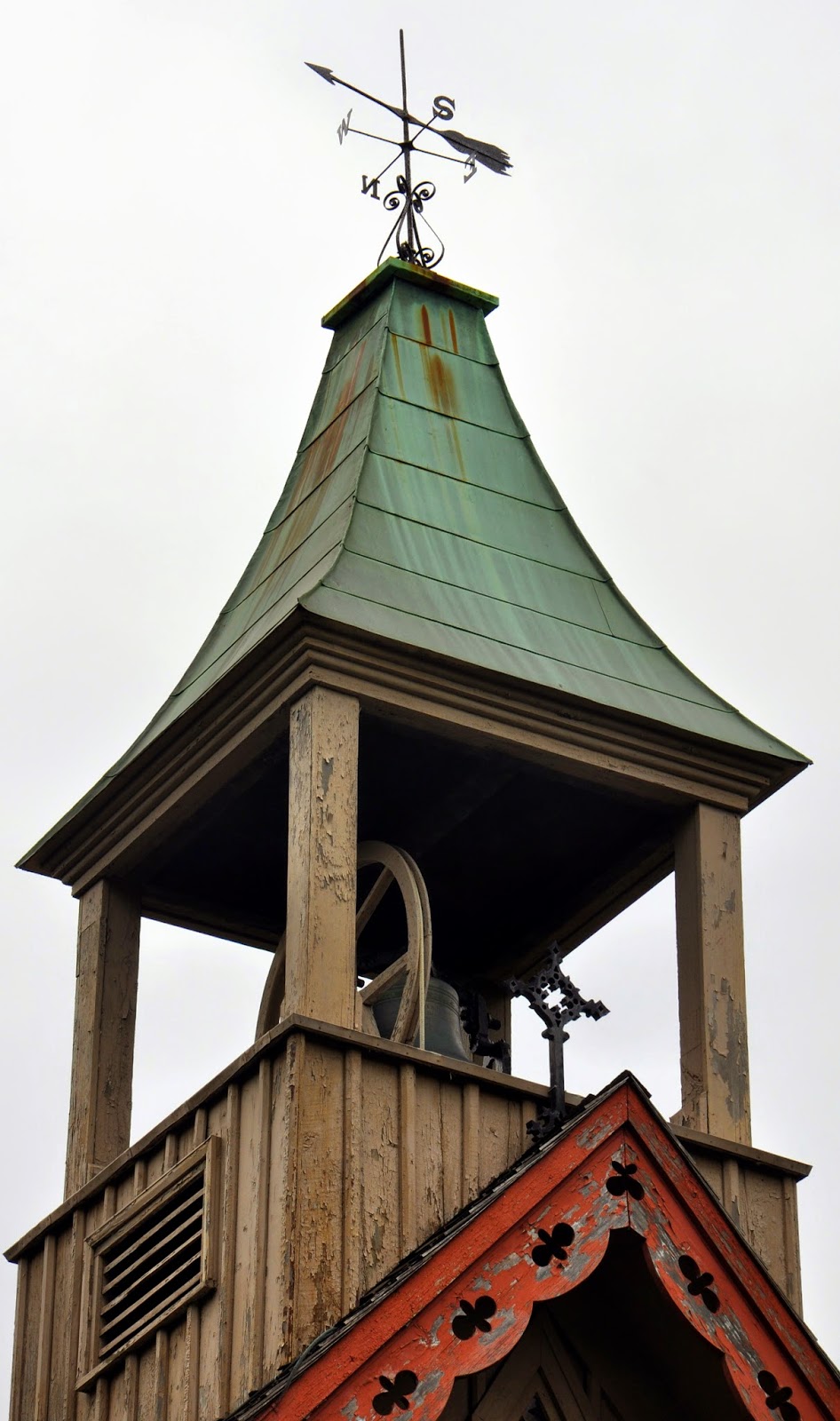 Getting there: The 9 Coal Museum is located at 9 Dock St, Lansford, PA 18232; Eckley Miners’ Village is located 3 miles south of Freeland off Highland Road (off Foster Avenue/Route 940). If using GPS, use 2 Eckley Back Road, Eckley, PA 18255.

Hours: To verify the museums are open, please check the websites.

Dogs: Surprisingly, yes. We arrived at the 9 Coal Mine with all three pooches, with plans to have one of us stay in the car (with the AC on) with them. The staff saw we had dogs and suggested we bring them right into the mine itself! This is definitely one dog-friendly museum! Although dogs aren't welcome in the buildings at Eckley Miners' Village, they're certainly welcome to join you as you walk through the village itself.

If you enjoy this blog, please tell your friends about it!
Posted by Jody Arneson at 2:06 PM