The soldier's last tattoo;
No more on life's parade shall meet
The brave and daring few.

On Fame's eternal camping-ground
Their silent tents are spread,
And Glory guards with solemn round
The bivouac of the dead.

In honor of Veterans Day, I thought I'd post this entry. This is an accidental blog: I hadn't originally planned a post around the National Cemetery in Winchester or Soldiers Circle in Prospect Hill Cemetery in Front Royal, or for that matter, the Loudon Park National Cemetery in Baltimore, the Confederate memorial just a few hundred yards away in the civilian cemetery, or the National Cemetery at Cold Harbor, VA, until I started going through the 483 photos from 2 days in October dedicated to leaf peeping and seeing where the road took us. How we got so far off of our intended itinerary is the subject of still another blog post. This is the fun of day trips and the overnighters that are increasingly slipping into the blog: the unplanned and unexpected discoveries.

Seeing those cemeteries, I started thinking about childhood trips to the National Cemetery at Gettysburg, and of course, Arlington, VA. And more recently, unexpectedly coming across the Confederate graves at Mount Olivet Cemetery in Frederick (itself a Southern town, back in the day) and Loudon Park Cemetery in Baltimore. And of course, Hollywood Cemetery in Richmond, with the biggest memorial to the Confederate dead of them all. My husband and I were both touched by the monuments of the cemeteries.

After the Civil War, the country -- North and South -- reflected on the War's toll. Two percent of the American population, mostly young men, had perished. And the South mourned the Lost Cause.

I've read other travel authors, who state that they can get a sense of a town's history through its cemeteries, that upon going to a new place, they seek out the cemeteries. Although I'm not so sure I can read a town through its dead, like reading someone's history through looking at her palm, there are clues. You can easily get a sense of who is who, by strolling through the local burial ground. Who thought they were so important, and had the money to back it up, that their grave marker was the biggest and most flamboyant? Which are the big family names? What did the town hold dear?

It's clear that Front Royal held dear its Confederate history. The Soldiers Circle, a simple yet striking tribute to Rebel soldiers who died in the Battle of Front Royal, makes that clear. Located on top of a hill overlooking the town, Soldiers Circle is composed of 90 graves marked by classically simple marble gravestones encircling a mass grave, topped by a striking monument honoring the Confederate dead.

In November 1868, the Ladies Warren Memorial Association (it's always the women, isn't it?) were chartered to collect the remains of dead Confederate soldiers buried in various sites around Warren County, VA. Locating, removing, and re-interring these remains was labor-intensive (and not very pleasant) and expensive, especially difficult in the post-Civil War era. In a short time, however, the Association had located the remains of 276 soldiers, representing each state of the Confederacy. The remains of 186 unidentified Confederates were buried in the center, and in 1882, the monument installed above the grave to memorialize it.

The ladies also helped erect another monument Prospect Hill Cemetery in September 23, 1899, along with the survivors of Colonel John Singleton Mosby's celebrated Rangers in memory of their comrades who had been captured and executed by Union troops exactly 35 years earlier.

On that fateful day in 1864, between 80 and 100 Rangers of Mosby's 43rd Battalion Virginia Cavalry entered Front Royal to disrupt the supply lines of General Phil Sheridan's Valley Army, which at that time was battling Confederate General Jubal Early's Southern forces in the main Shenandoah Valley. This raid against the Union troops was no different than the dozens of other successful raids the Rangers had conducted in the previous 18 months. Its ending, however, would be vastly different and would be remembered as one of the most tragic episodes of a tragic war.

After setting up his ambush and engaging the enemy's ambulance train, Mosby realized that his command was being surrounded by General Wesley Merritt's cavalry division, which was following the ambulances. Mosby immediately initiated a retreat towards Chester Gap; the retreat quickly became a running gunfight. During this action, six of Mosby's Men were captured, and executed. Four of the six were shot before the horrified citizens of the town; the other two were offered their freedom if they would disclose the location of Mosby's headquarters. When they refused, they too were executed, hanged on a walnut tree that stood where the cemetery is now.

The Ladies Warren Memorial Association was organized by Miss Mary Simpson, a member of a local family noted as teachers. Having had two brothers killed in the Confederate Army, Major Robert Simpson and John Simpson of the Warren Rifles, she personified Southern patriotism and in her home in Front Royal, organized the Warren Memorial Association, which established Prospect Hill Cemetery, the first public burial ground in Warren County.

At first I thought that maybe that's how this town, like so many other little Southern towns in the late 1860s and the decades following the Civil War, came to terms with the defeat of the Confederacy. Maybe, I theorized, in collecting and burying their nameless dead (often in mass graves), and erecting monuments to the unidentified soldiers -- of which there were often more than those who could be identified -- was how they put the past behind them. Literally, burying it, wrapped in the glory of the Lost Cause. And once they did, perhaps they were taking the first necessary steps toward -- although it took decades -- moving forward as part of this nation. But as I did a little more research into the Ladies Memorial Associations, I realized this belief was mistaken. According to Caroline Janney in her book, Burying the Dead But Not the Past, the Ladies Memorial Associations made the Confederate burial places shrines that perpetuated nostalgia for a romanticized "Old South," where slavery and abusive slave owners didn't exist, a place that was a victim of Northern aggression; these "shrines" instead perpetuated the sense of southern victimhood and hostility.

An estimated 700,000 soldiers, North and South, died in the Civil War. As the death toll rose, the U.S. Government struggled with the urgent, but unplanned need to bury fallen Union troops, and that's what propelled the creation of the national cemeteries. As early as September 1861, the War Department directed commanding officers to keep accurate and permanent records of deceased soldiers. Hasty graves near battles were all marked with numbered head boards, and the numbers were carefully recorded, against the future when these records would be needed to identify remains. An Omnibus Act in July 1862 directed the President to purchase land to be used as a National Cemetery "for soldiers who die in service to the country." By the end of 1862, 14 national cemeteries, most less than 10 acres, had been established. Cemetery sites were chosen where troops were concentrated: camps, hospitals, battlefields, and railroad hubs.

At the end of the Civil War, the grim task of surveying lands at the various battlefields to locate, count, and identify Union remains began. That's not a job I'd have wanted! The dead were identified by letters, receipts, diaries, photographs, marks on belts or cartridge boxes, and by interviewing relatives and survivors.

By 1872, 74 national cemeteries and and several "soldiers lots," together containing some 305,492 remains, had been established.

Despite the efforts and the War Department directive to keep careful records, about half were unidentified and unidentifiable. At first, only soldiers and sailors who died during the Civil War were allowed to be interred in the national cemeteries. In 1873, eligibility was expanded to all honorably discharged Union veterans.

Numerous Union soldiers from surrounding battlefields were re-interred at the Winchester National Cemetery, including those from the different battles of Winchester, the Battle of Front Royal, Battle of New Market, and Battle of Harpers Ferry, as well as actions at Snickers Gap, Martinsburg, WV, and Romney,WV.

In the Winchester National Cemetery, there are 14 monuments to Union regiments, corps, and states that either are represented by some of the soldiers buried in the cemetery and/or had participants in the 3rd Battle of Winchester. The oldest monument dates to 1864 and was erected for the 38th Massachusetts Infantry. There are also two "monuments," typical to National Cemeteries created for re-interred Union soldiers. They are both seven feet, six inches in height, and are made of an original cast iron seacoast artillery tube, secured by a concrete base. One is located on each side of the flagpole. In addition, An upright historical marker typical of those erected by the Virginia Department of Historic Resources is also near the opening of the cemetery, with a focus on the Third Battle of Winchester, which occurred near there.

Plaques stationed around the cemetery, as well as several other national cemeteries, also provide stanzas from Theodore O'Hara's poem, "The Bivouac of the Dead," which I provided at the beginning and end of this post. 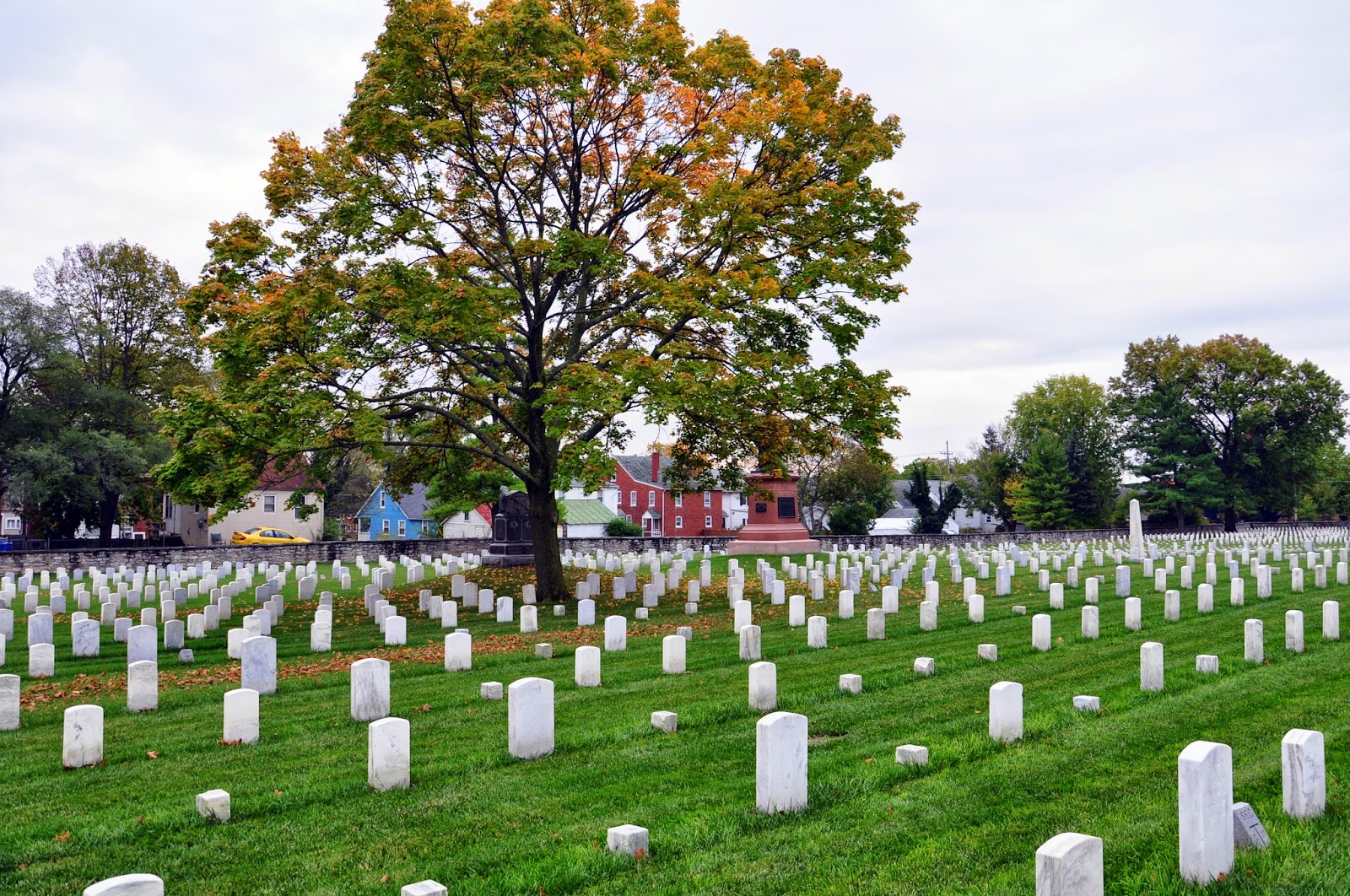 But that left most the Confederate dead, often interred in shallow graves, scattered around field hospitals and battlefields, until the various memorial associations gathered them up and memorialized them in local burial grounds. And although my sympathies are clearly with the Union, I've come around to my husband's more egalitarian approach that as a nation we need to honor even these mens' lives and deaths -- and reclaim them as the Americans they were, every last one of them -- although not the banner and institutions for which they marched.

It's worth noting that in the Winchester National Cemetery, local men, who surely had living relatives who'd remembered the Civil War, were buried there after perishing in service to our country in World War I (and subsequent wars). By then these men and their families and their hometown all viewed themselves as American. I wonder what the families thought as their loved ones were laid to rest along side Union soldiers that two generations previously had fought against their families? I guess reconciliation came at last, although it took at least 50 years.

Future centuries of Americans will be able to read clues to the history of their country through these graveyards. I wonder if they will understand what they see?

No vision of the morrow's strife
The warrior's dream alarms;
No braying horn nor screaming fife
At dawn shall call to arms.

Your own proud land's heroic soil
Shall be your fitter grave;
She claims from War his richest spoil -
The ashes of her brave. 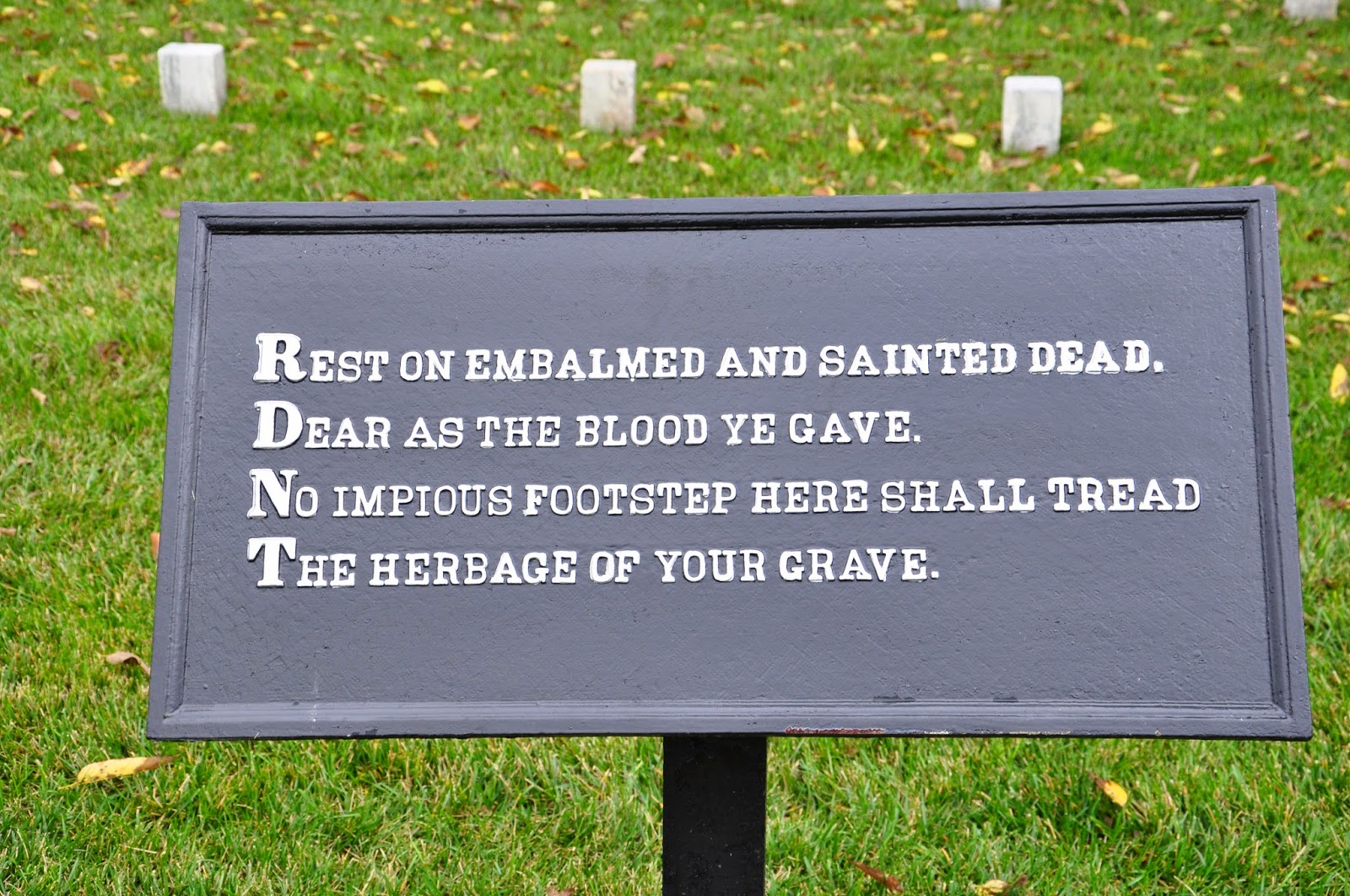 Dogs: Although many cemeteries allow well-behaved owners to bring their pets, they are not welcomed in either the Winchester National Cemetery, or other national cemeteries, nor Prospect Hill Cemetery.

Hours: Pretty much dawn until dark.