The weather is colder now, and we're celebrating the holidays already! Although I love late fall and the holiday season, I miss the glory days of summer and the fun of those warm weather day trips! It's time to slide in a couple posts about one of my favorite trips this summer -- not a day trip, exactly. It was a 2-day affair, an "overnighter." My sister and I had been on the shorter "Passage to Five" excursion offered by Chesapeake Lights in May; before we'd even gotten off the boat that day, we'd signed up for the once annual 2-day trip that takes place every August.

The lighthouses of the Chesapeake Bay are a varied offering of (almost) comical mishaps (one was mistaken as a target and bombed by the Navy), unexplained tragedy, spooky hauntings, and lessons in bravery in the face of almost constant danger.

Every year in early August, Captain Jack Richards takes his boat, the M/V Sharps Island, and 14 lucky passengers, on a tour of the southern part of the Chesapeake Bay to see 11 lighthouses or former lighthouses (three are bases of former lighthouses with lights attached). For lighthouse fans this is a must-do tour! But even if you're not a huge fan, the lighthouses and stories of the Bay are interesting, and the opportunity to become better acquainted with the Chesapeake Bay and the communities on it is wonderful. For instance we learned that the poles sticking out of the water every once in a while, such as the photograph below, are pound nets -- a way of fishing that only a few watermen, with special licenses, are authorized to run.

Captain Jack and First Mate Jane are no-nonsense but pleasant to tour with, and very knowledgeable about the Cheseapeake Bay, having several decades of experience between them). If they say move, then you'd best move, because there's a reason for it. If they say "clamp on," then you best find something to grab, because they're anticipating a bump of some sort. Although we had no excitement (thank god) on our trip, they started the 2-day excursion with a serious talk about safety and the need to listen to the captain  (or the first mate) if they start barking orders.

We left out of Tilghman Island on a beautiful Saturday for the 2-day tour (and yes, the theme song for Gilligan's Island was hummed by several of us). The skies eventually turned overcast further south in the Bay. The first stop on our itinerary was a lighthouse I'd already visited by land, Cove Point Lighthouse. Unlike the Passage to Five excursion that we'd enjoyed earlier this summer, several of the lighthouses we were seeing that day were also accessible by land. However, seeing the lighthouses by water -- the way they were meant to be viewed -- gave a better perspective. 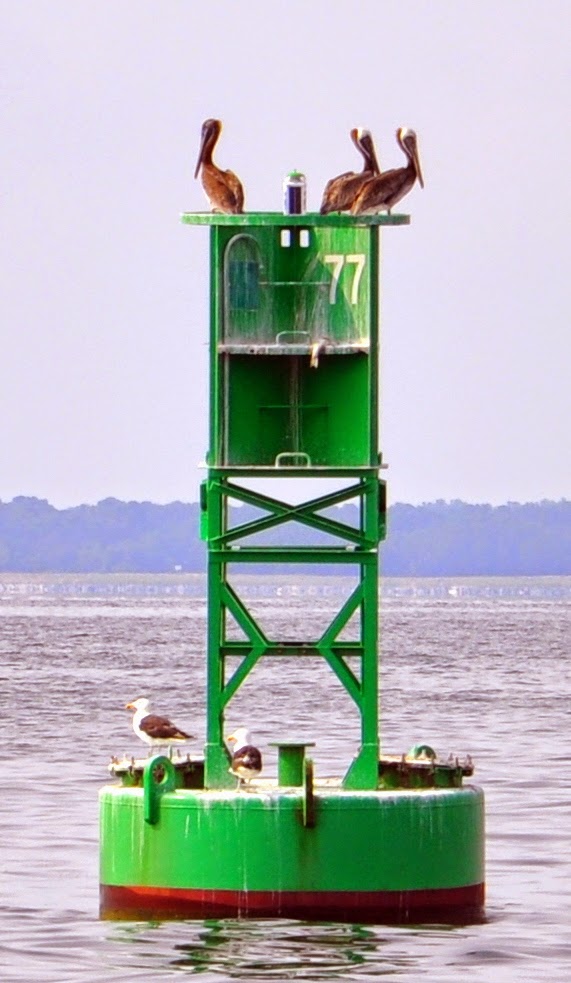 We learned that lights on the Chesapeake Bay are to alert navigators to water hazards as well as to serve as navigational aids -- if you see the Cove Point Lighthouse, for example, then you're on the northside of the mouth of the Patuxent River. In several places on the Bay, land is distant and hazy, with few readily identifiable landmarks to let boaters know exactly where they are. In the years before GPS provided pretty accurate locations, the lights told you where you were -- which river you were happening upon or which island you were near.

The next lighthouse was, interestingly enough, named Point No Point Lighthouse. Sometimes you really have to wonder how these lighthouses were named. Point No Point lighthouse, unlike several of the others on the Chesapeake Bay's Western Shore, doesn't mark a light, although there are nearby shoals that pose a hazard. It stands two miles removed from the shore, six miles north of Point Lookout and the entrance to the Potomac River. 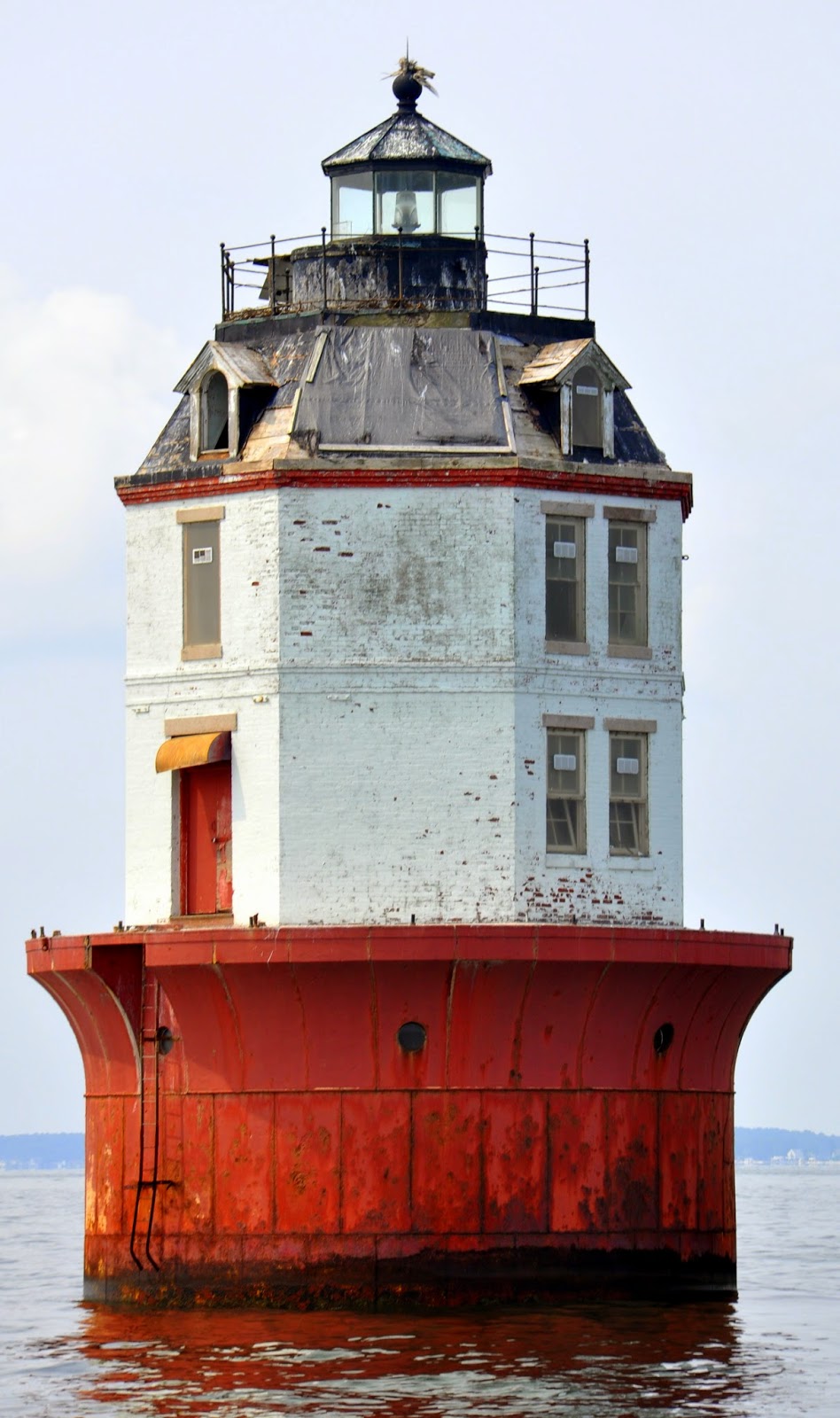 This lighthouse's life began when it ran away from the worksite. Work began on the lighthouse in 1901, but it was plagued with problems from the get-go. Shortly after the caisson was towed to the site in April 1903, disaster struck. A temporary construction pier built by the contractors during the previous season collapsed, and the caisson, which was secured to the pier, overturned and floated away. A tugboat trailed after the wayward caisson and picked it up the next day off Rappahannock River, 40 miles south of the construction site -- such excitement! The caisson was towed to Solomons, MD where it was repaired. Finally, on October 21st the caisson was towed back to the site, and secured. The lighthouse was finally completed in June 1904.

In 1938, Point No Point Lighthouse became fully automated, though this did not mean that it was soon bereft of keepers. A crew of coastguardsmen remained at the lighthouse until 1962, when it was finally converted to unmanned operation. 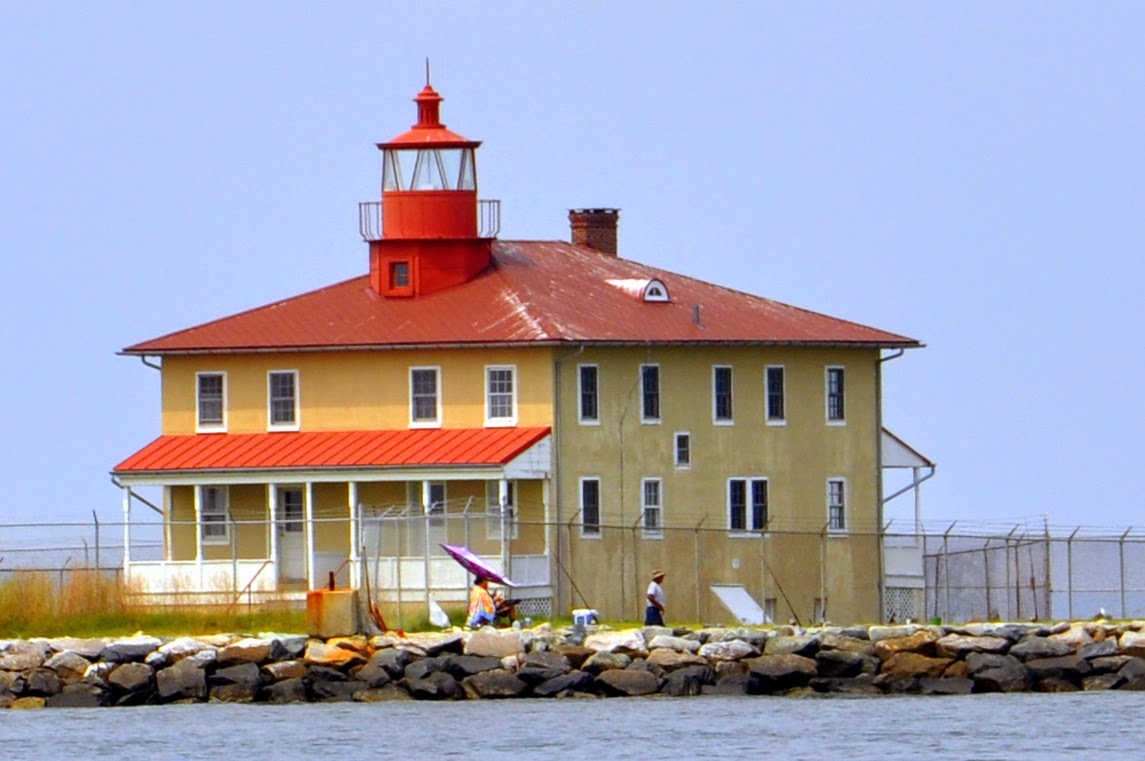 There are many eerie claims that this lighthouse is haunted (and given Point Lookout's Civil War history, there is certainly the catalyst for a good haunting). The Civil War completely transformed the point. First, the Hammond General Hospital was built in 1862 to care for Union wounded. In 1863, Confederate prisoners began to be held at the hospital; and soon Camp Hoffman, a vast prison camp, was built, eventually holding 20,000 prisoners, of whom more than 3,000 died due to the harsh conditions, limited food rations and poor shelter from the elements. 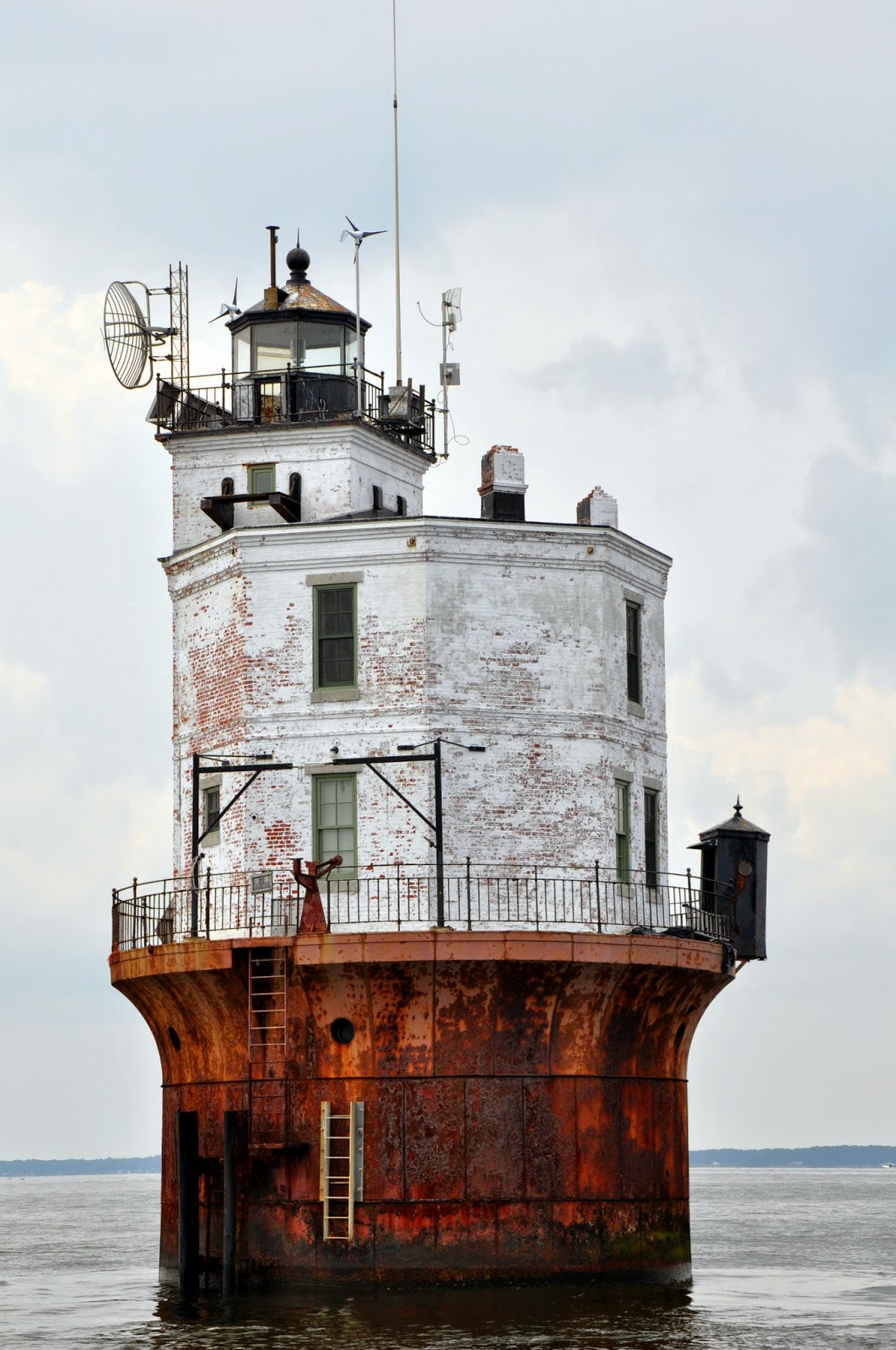 Interestingly, if you've ever wanted to live in a lighthouse, here's your chance -- the lighthouse is for sale, for about $500,000, featuring "a water view from every window." Almost affordable. There's no flood insurance to be had for it though, as it's in a "flood plain."

For a late lunch (around 1:30 p.m., and we were famished!), we headed over to Tangier Island. Tangier Island was really fascinating. I'd never been to one of the islands on the Chesapeake Bay, other than the readily accessible Tilghman Island, which, although parts of it still hark back to the original island working community, much is getting built up with vacation homes. It's fast losing its character.

Tangier Island is inaccessible enough -- only by boat or, surprisingly, airplane -- that it not only retains it's unique, authentic waterman community character, but the inhabitants still retain a unique accent that more closely resembles English from Restoration Era England than the East Coast southern twang you'd expect on the mainland. I kept walking slowly past people who looked as if they lived on the island to eaves drop so I could hear the accent for myself, until I realized how creepy that made me seem.

As you leave the docks of the boat or ferry that brings you to Tangier Island, there are several old ladies in golf carts who will take you on a $5 tour of the island. Take it (and then please tip generously). Although the tour points out some silly things ("over here is the old health center; over there is the new health center" (ironically right next to a graveyard), and "there's a souvenir shop, there's some interesting things in it"), it's a good way to hear some of the history of the island and get a sense of what life is like there -- one thing is for sure: it's still continuing on.

Tangier has a school with 12 grades, with about 80 students. We learned that although crabbing and oystering is a big source of employment, a lot of the "young men" are hiring themselves out to run barges along the Chesapeake Bay. We learned that fairly recently they got high speed internet on the island, although that hasn't changed much, and that most people shop on the mainland (although there's a grocery store on the island), taking the ferry across to Crisfield. 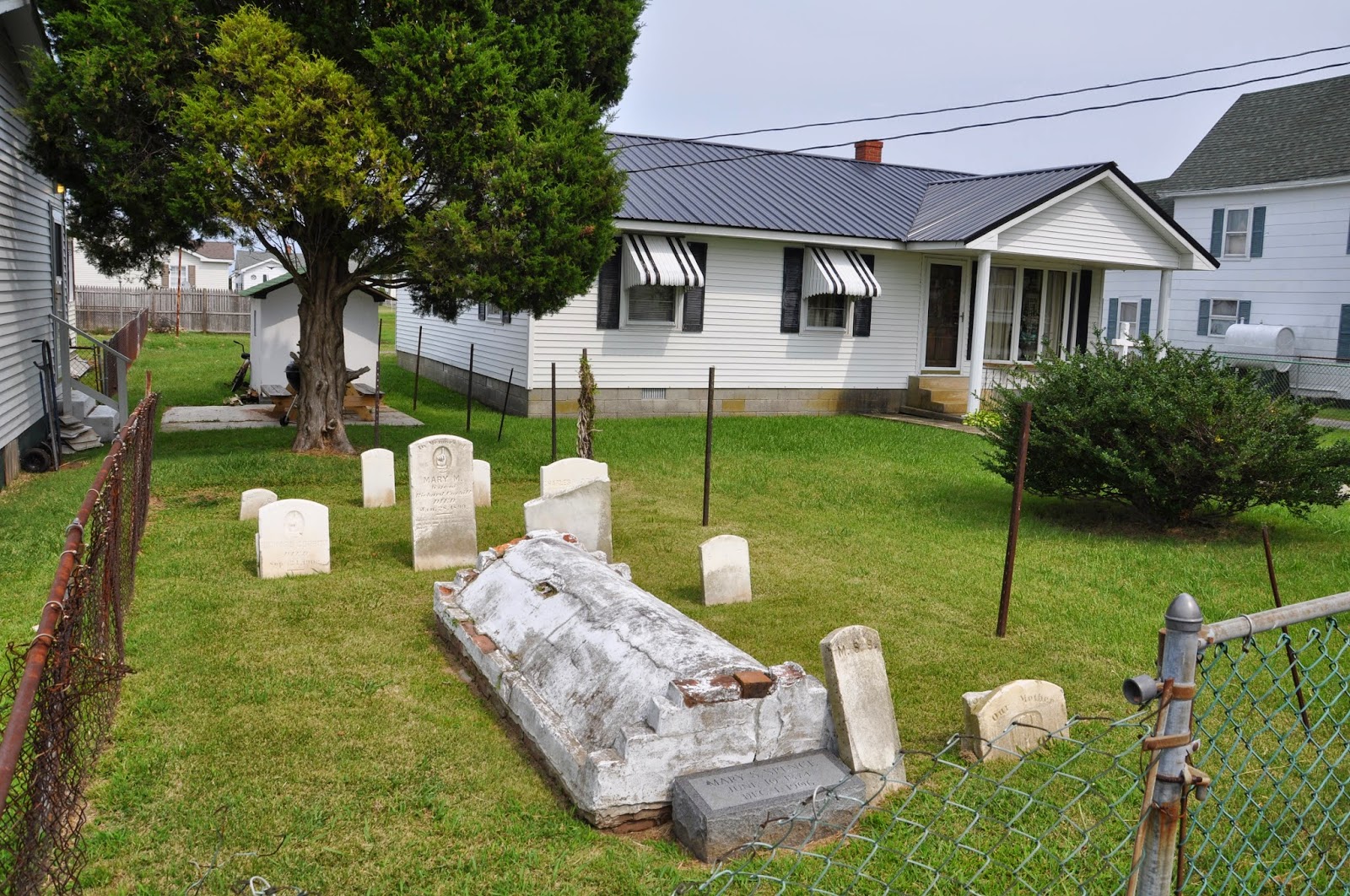 As you walk around the island, you'll notice a lot of graves in front and side yards. It's a casual approach to death that eludes us mainlanders. Wikipedia notes this is "an old custom once common in colonial America prevailed into the early twentieth century: families often buried their relatives in the yards of their homes. This custom was abandoned because of the space limitation of the small yards on Tangier, and there are now churchyard cemeteries at each of the island's churches." But signs on the island, and the lady tour guides themselves, say this is because the only place fitting for graves is also, unfortunately, the only place fitting to build a house: high land. They don't want their loved ones to float away. Tangier Island is just 3 feet above sea level. Mother Nature sneezes and the island is flooded. 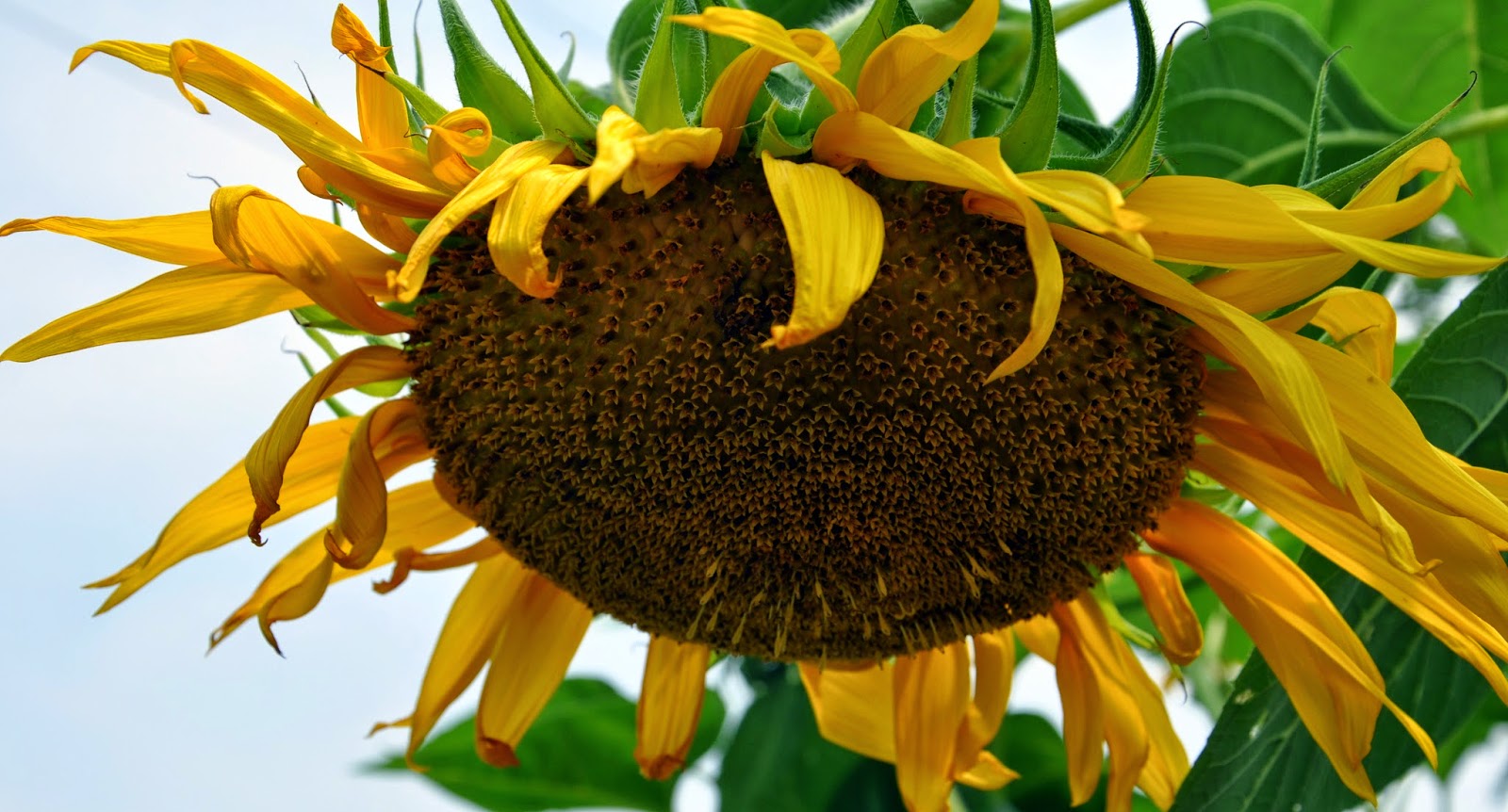 Sadly, Tangier Island itself is endangered, as it is sinking and eroding away. And like many other disappearing islands of the Chesapeake Bay, it'll be gone someday.

Know before you go #1: Several of the lighthouses may be visited by land, Cove Point and Point Lookout among them. The website for Point Lookout State Park is http://dnr2.maryland.gov/publiclands/Pages/southern/pointlookout.aspx.
,
Know before you go #2: A hat; a camera with extra batteries, memory cards and a camera "rain jacket" to shield your technology from the wave spray that occasionally gets kicked up; sun block (which you should put on at the beginning and refresh every few hours; and bug spray are well advised. Pack a few snacks as lunch on day one is a late lunch. 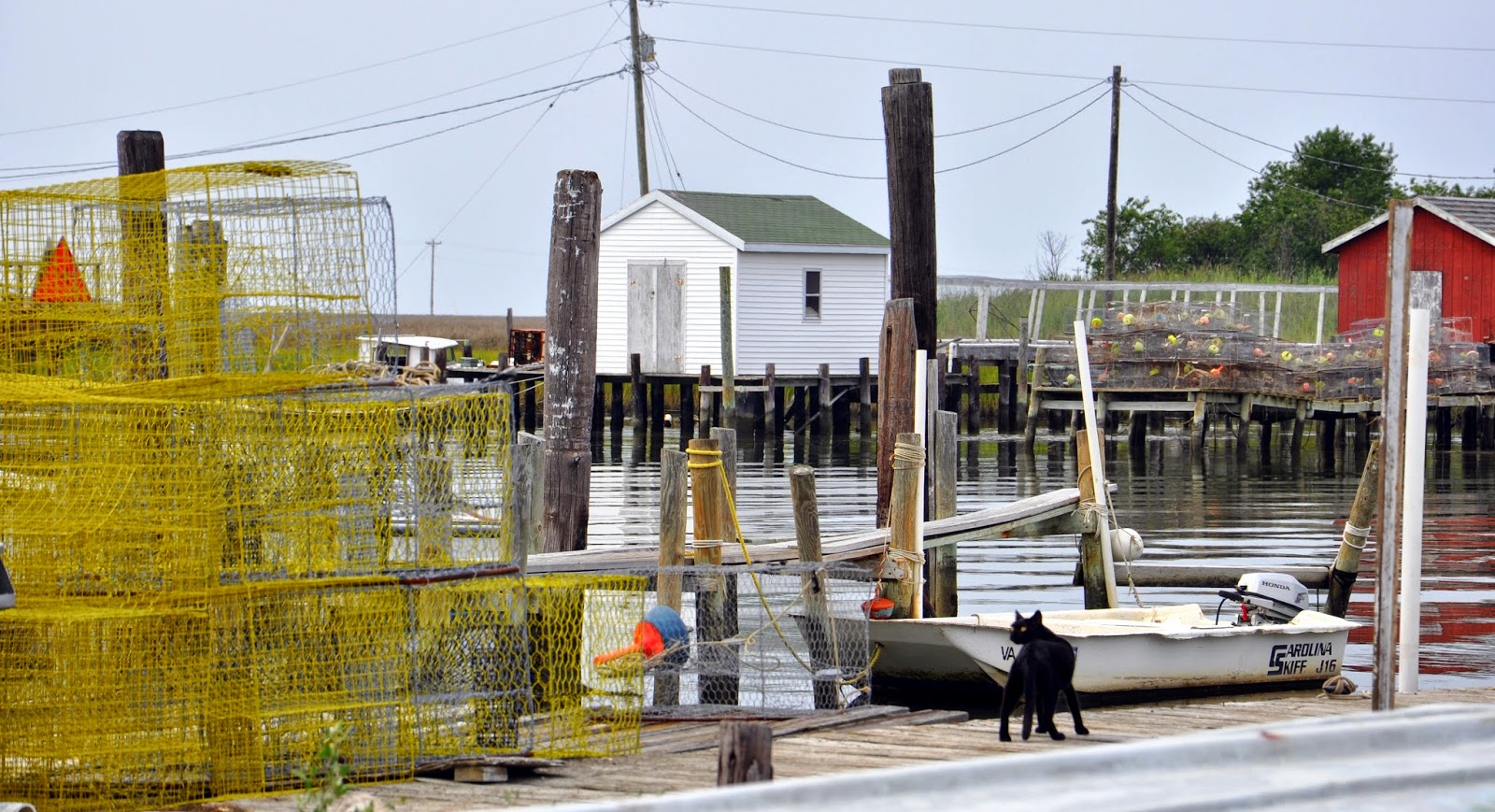 Tip#3: If you don't go on the lighthouse tour, visit Tangier Island anyway. There's enough there that I could have made a whole day trip to it. Drive to Crisfield, take the ferry over to Tangier Island, have lunch at one of the Islands two restaurants, walk around the island, take photos of the birds (apparently birding is a great reason to visit the island), purchase a few souvenirs, board the ferry and head back to the mainland. There are one or two bed and breakfast inns on the island as well.

Check out this post for Part 2 of this trip!