Feeling the Love for the City of Brotherly Love 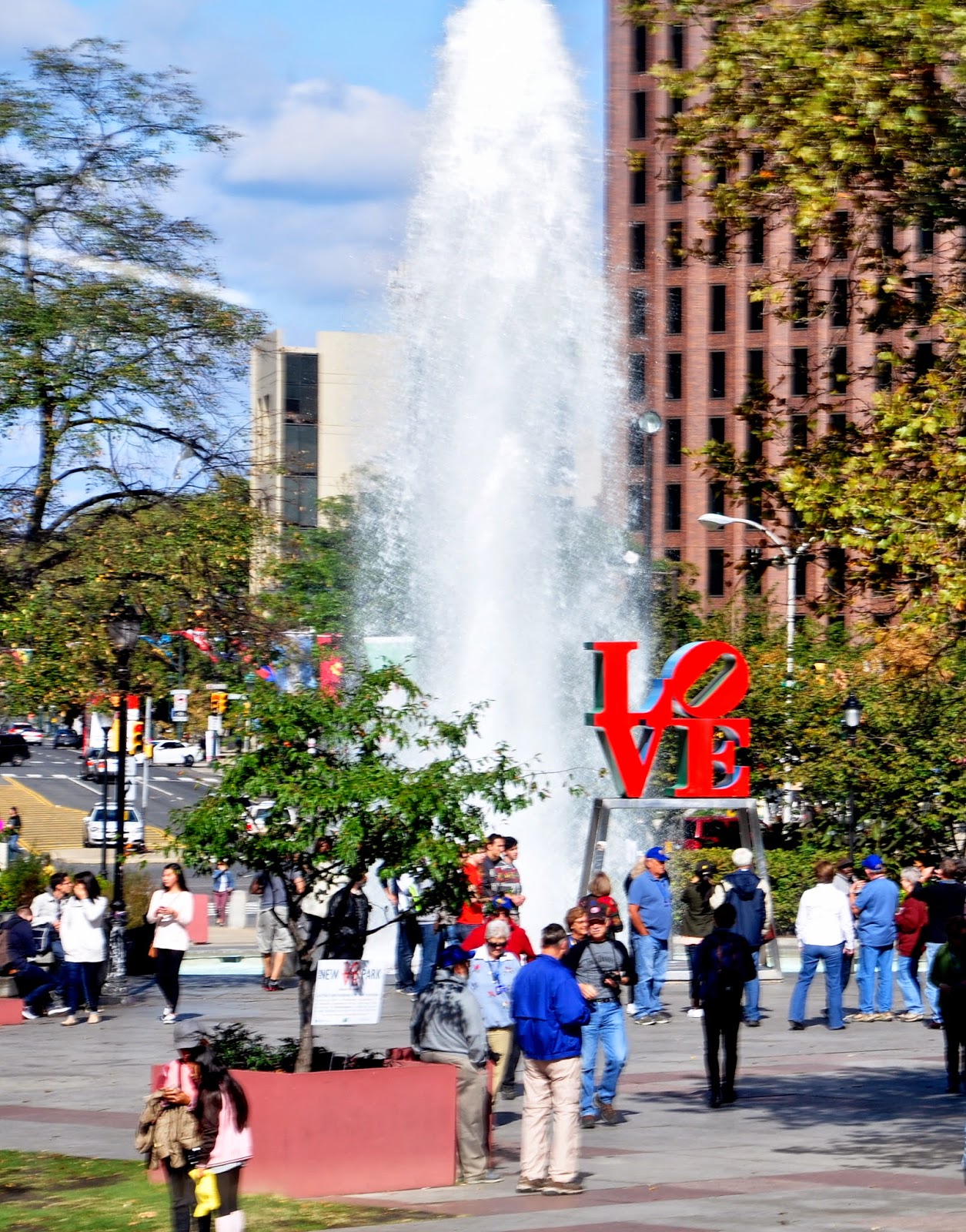 Remembering a favorite destination this past fall during this Christmas week!

A sunny but cool October Sunday lured us to Philadelphia, a city we really haven't had a chance to explore. I've been there a few times over the years, as have my husband and even my boys, on school field trips. We decided to take a double-decker, hop-on, hop-off bus tour of the city, just to get a sense of the city. Having been on a similar tour in New York City, I've learned that these bus tours often can provide a good introduction to a city.

The bus tour started near the Independence Hall Visitor's Center. You can purchase tickets in advance over the phone or online, or at several of the corner near the Visitor's Center. The bus tour visits 27 stops, at any of which riders may choose to disembark to visit the site. The stops include the Betsy Ross House, Christ Church and the Christ Church Burial Ground, Reading Terminal Market, City Hall, Love Park, Eastern State Penitentiary, Antiques Row, Penn's Landing/Waterfront, and museums such as the Museum of American Jewish History, the Rodin Museum, and the most popular "Rocky Steps"/Philadelphia Museum of Art, 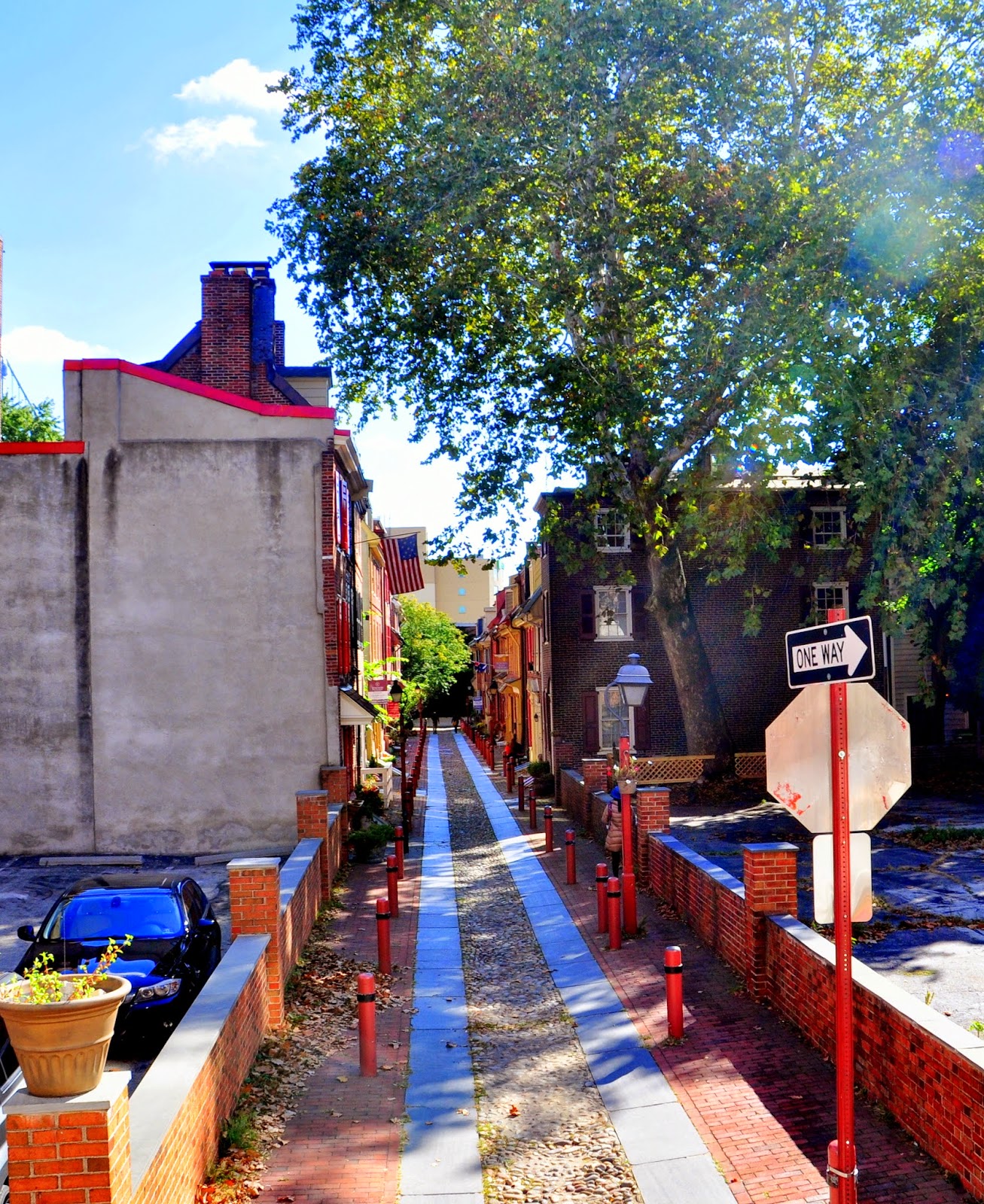 Not having spent much time in the city, it was pleasant to see so much art spread around the area, with lovely fountains and green spaces. And indeed, the tour guide confirmed that the city has more outdoor sculptures and murals than any other American city,

In 1682, William Penn founded the city to serve as capital of Pennsylvania Colony. Hoping that Philadelphia would become more like an English rural town instead of a city, Penn laid out roads on a grid plan to keep houses and businesses spread far apart, with areas for gardens and orchards. This ideal plan was rejected by the inhabitants, who subdivided and resold their lots. As they crowded by the Delaware River, the port, narrow alleyways like the one pictured here were built up. The wealthier citizens lived, much like today, in the larger homes on larger lots, and the poor lived in tiny homes on the tiniest of plots. 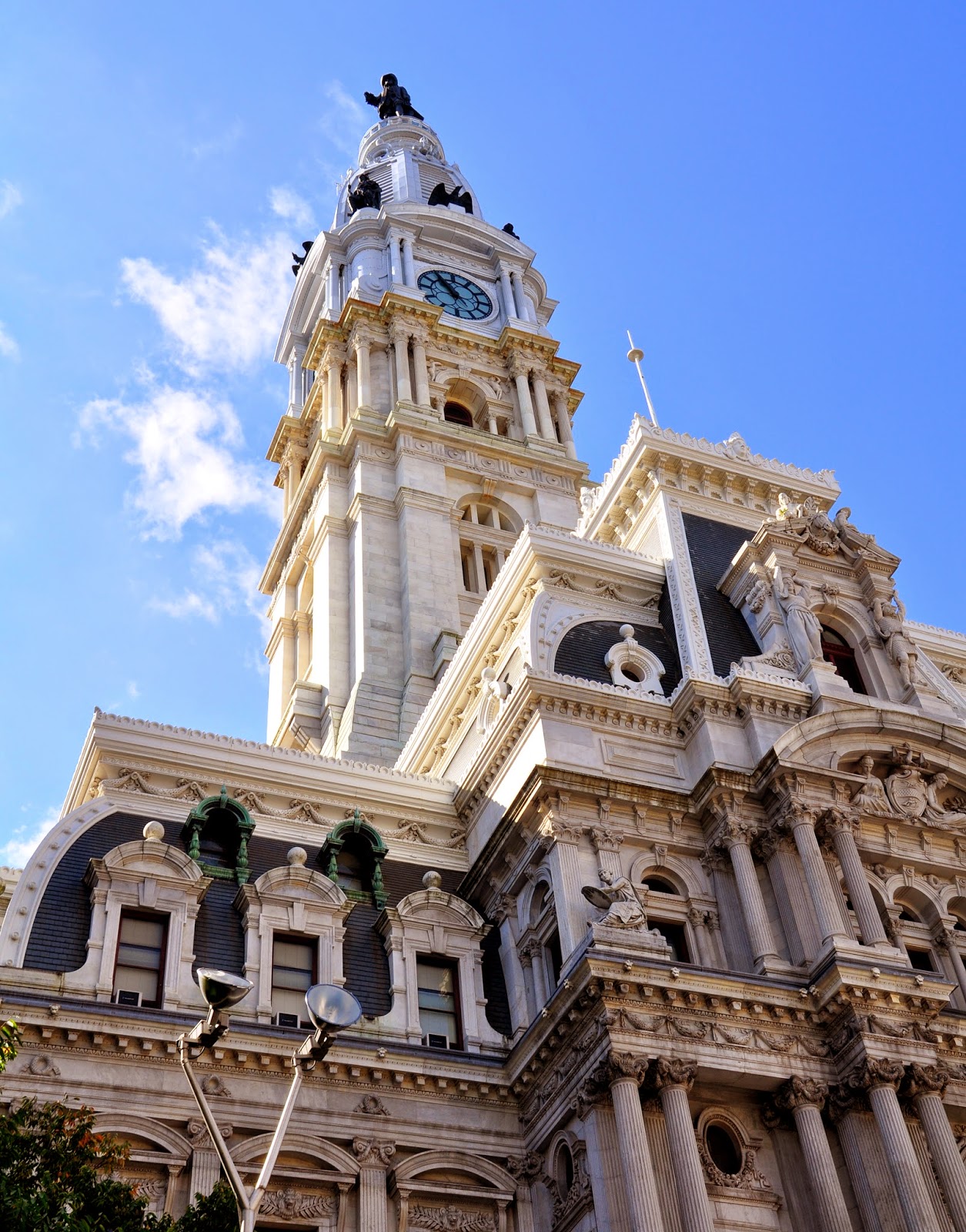 Penn, a Quaker, intended for his colony to be a place free of the religious persecution he had experienced in England. This tolerance, far more than afforded by most other colonies, led to better relations with the local Native tribes and subsequently fostered Philadelphia's rapid growth into America's most important city.


Distracted by New York City to the north, and Washington, DC to the south, I didn't realize how important Philadelphia had been during colonial times, even though I vaguely remembered that Philly had served as the nation's capital city at least once. By the 1750s, Philadelphia had surpassed Boston to become the largest city and busiest port in the Colonies, and second only to London -- no small achievement.

During the Revolutionary War, Philadelphia served as a meeting place for the Founding Fathers of the United States, who signed the Declaration of Independence in 1776 and the Constitution in 1787. Philadelphia also was one of the nation's capitals during the Revolutionary War, and the city served as the temporary U.S. capital again while Washington, D.C., was under construction.

During the 19th century, Philadelphia became a major industrial center and railroad hub that grew from an influx of European immigrants, including my ancestors who, we believe, entered the United States through Philadelphia, before moving on to farmland in south central Pennsylvania. 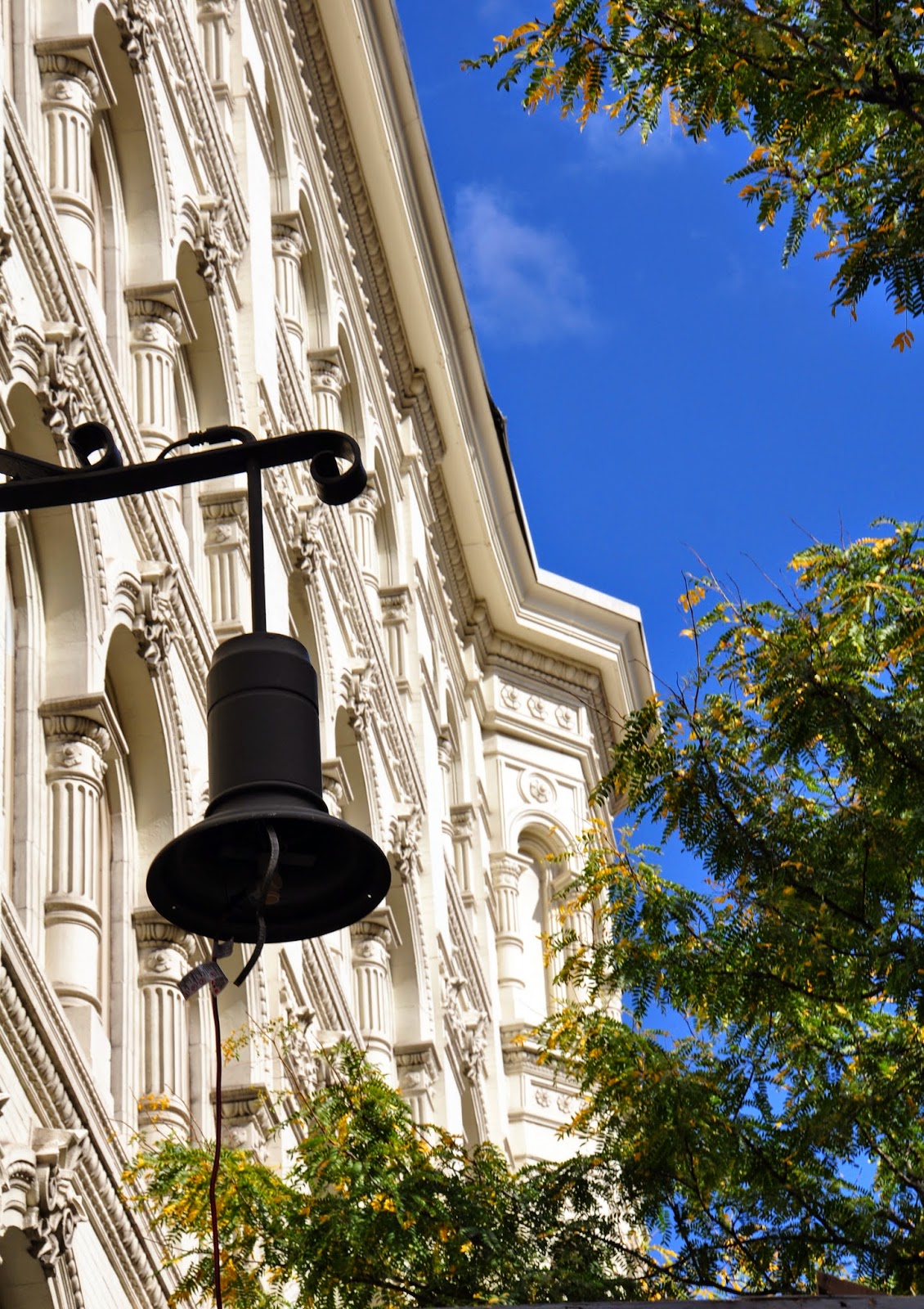 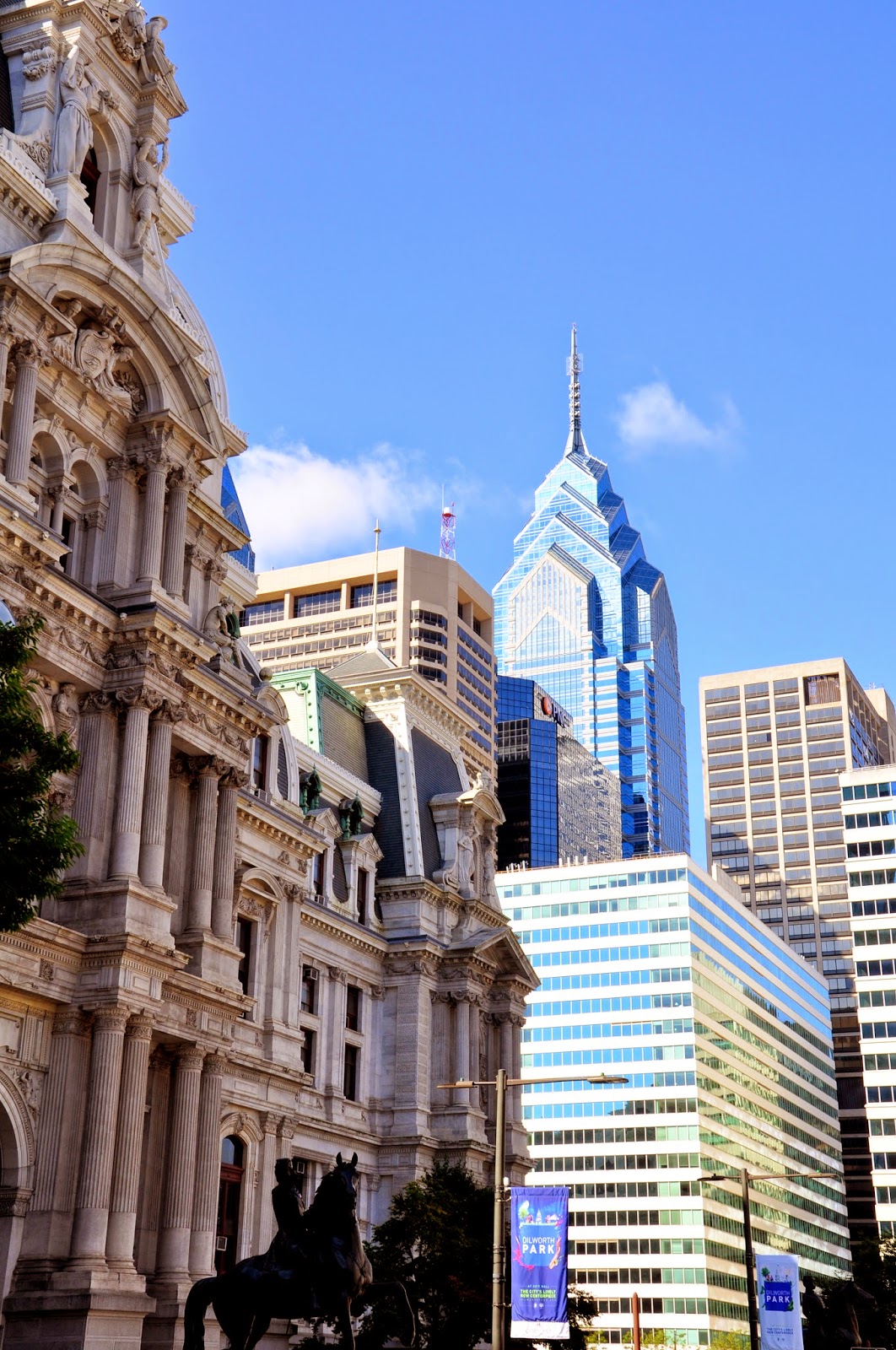 What I love about touring cities, whether on foot or on a double-decker bus, is seeing the contrast of eras, of Colonial and contem-porary, Art Deco and Greek Revival. There are still many streets of the dignified Georgian and Federal style townhomes. And of course, there are still the lovely old Victorian mansions, and now, of course, the glass and steel skyscrapers. I enjoy the abundance of architectural details -- usually missing from the cookie-cutter suburbs I live in. 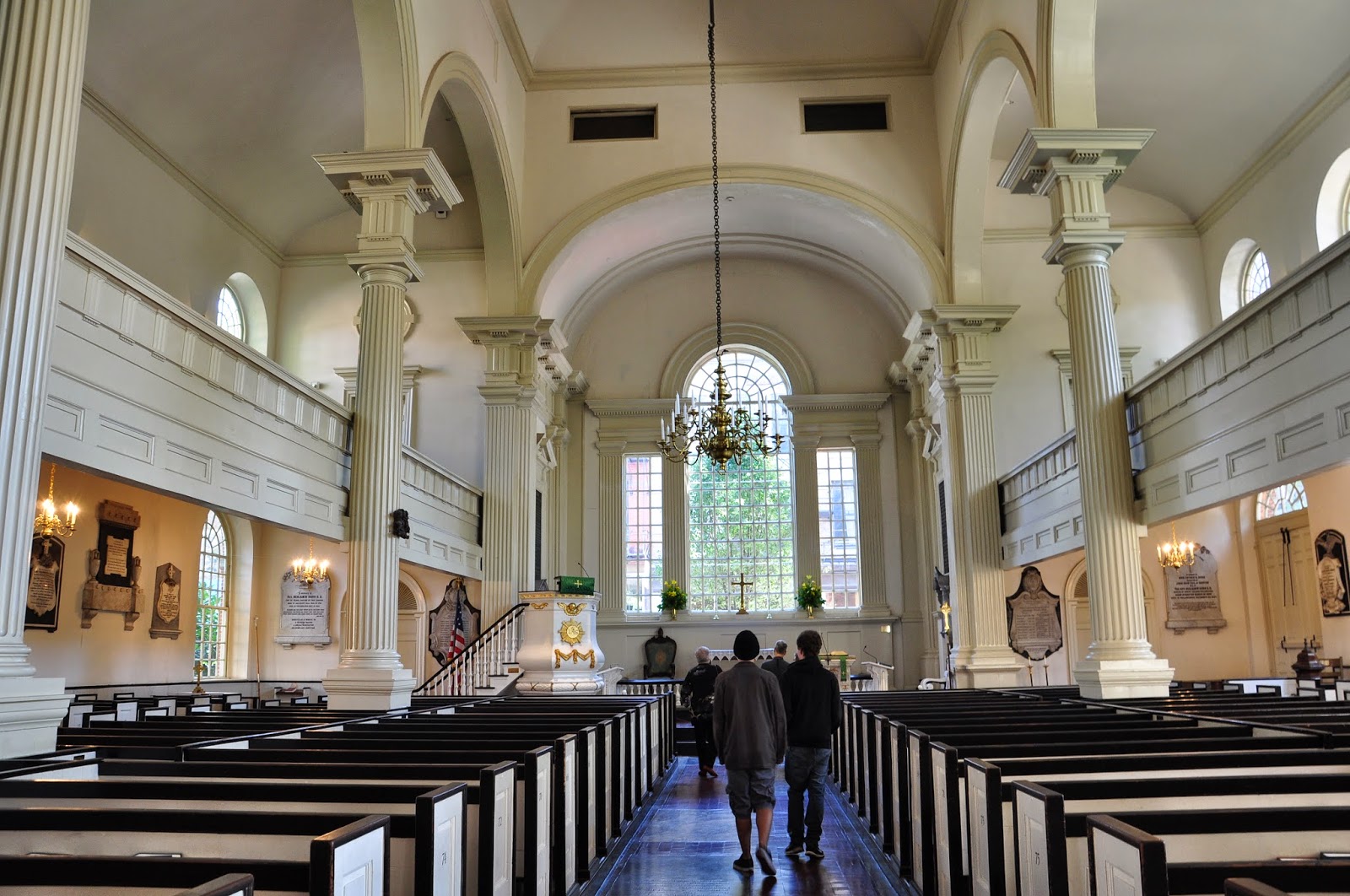 The tour begins and ends at the northeast corner of 5th and Market Streets. Right around the corner is Christ Church, known as the "nation's first church." At Christ Church, a quarter of Philadelphia’s free and enslaved Africans were baptized, a school was created to educate slaves, and the first black priest, Absalom Jones, was ordained. A who's who of American history sat their fannies in those pews. During the Revolutionary Era, Christ Church welcomed the Continental Congresses. Benjamin and Deborah Franklin and Betsy Ross were parishioners. Later, George Washington and John Adams attended services while they were the nation’s Chief Executives. 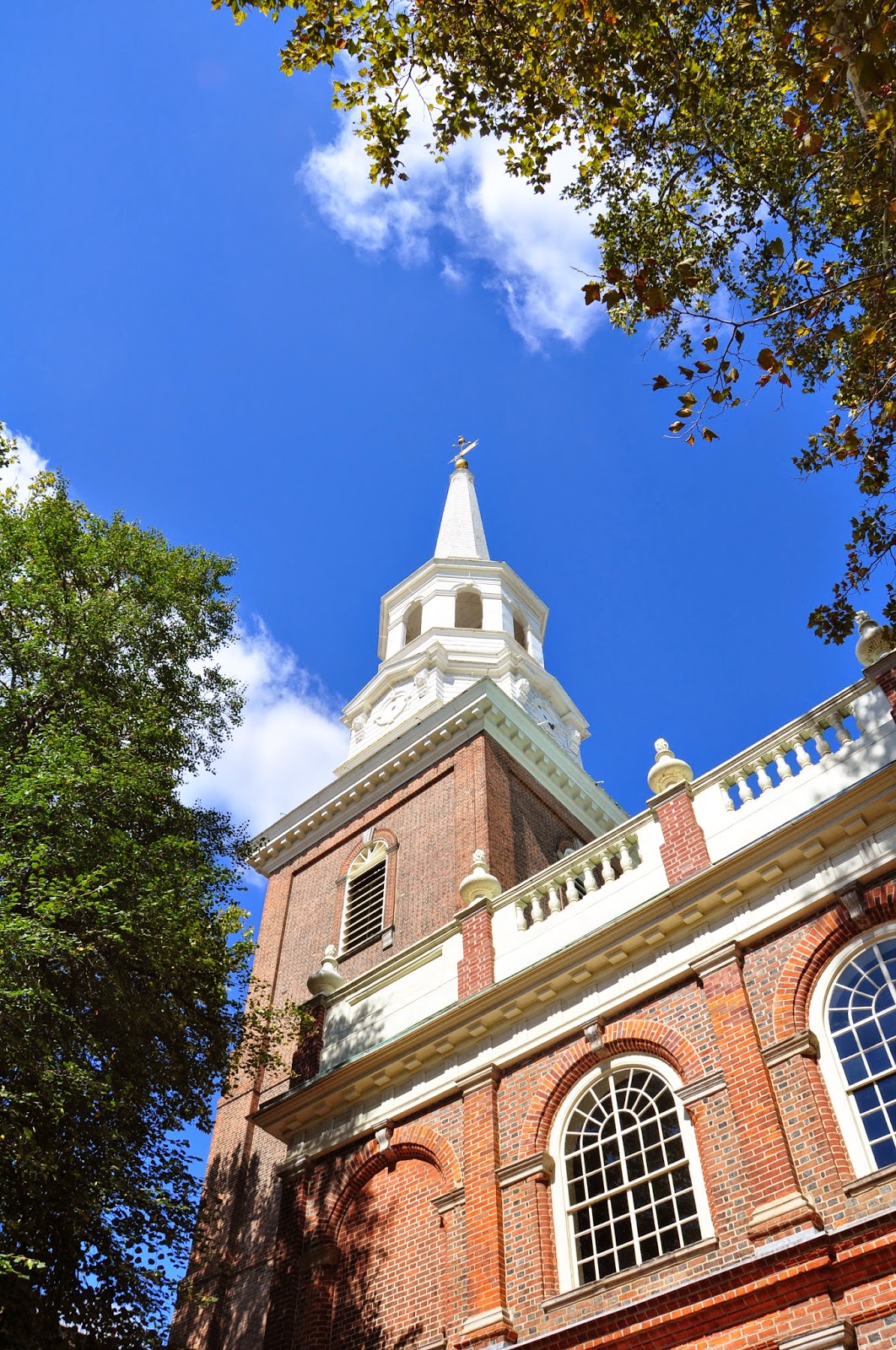 The current church was started in 1727, and has long been considered one of the finest Georgian structures in America. The steeple, financed by a lottery organized by Benjamin Franklin, was the tallest structure in the colonies for 56 years.

The interior of the church is as impressive as the exterior. It includes the baptismal font from the 1300s, donated by All Hallows Church in London in which William Penn was baptized, a pulpit from 1769 built by Thomas Folwell, and a candle chandelier (pictured above) still in use since its installation in 1740.

From there we had to visit the Burial Ground, one of America’s most important Colonial and Revolution-era graveyards. With 1,400 markers on two acres, right in the heart of Philadelphia, it creates a quiet oasis of history and peace in the midst of the city's hustle and bustle. 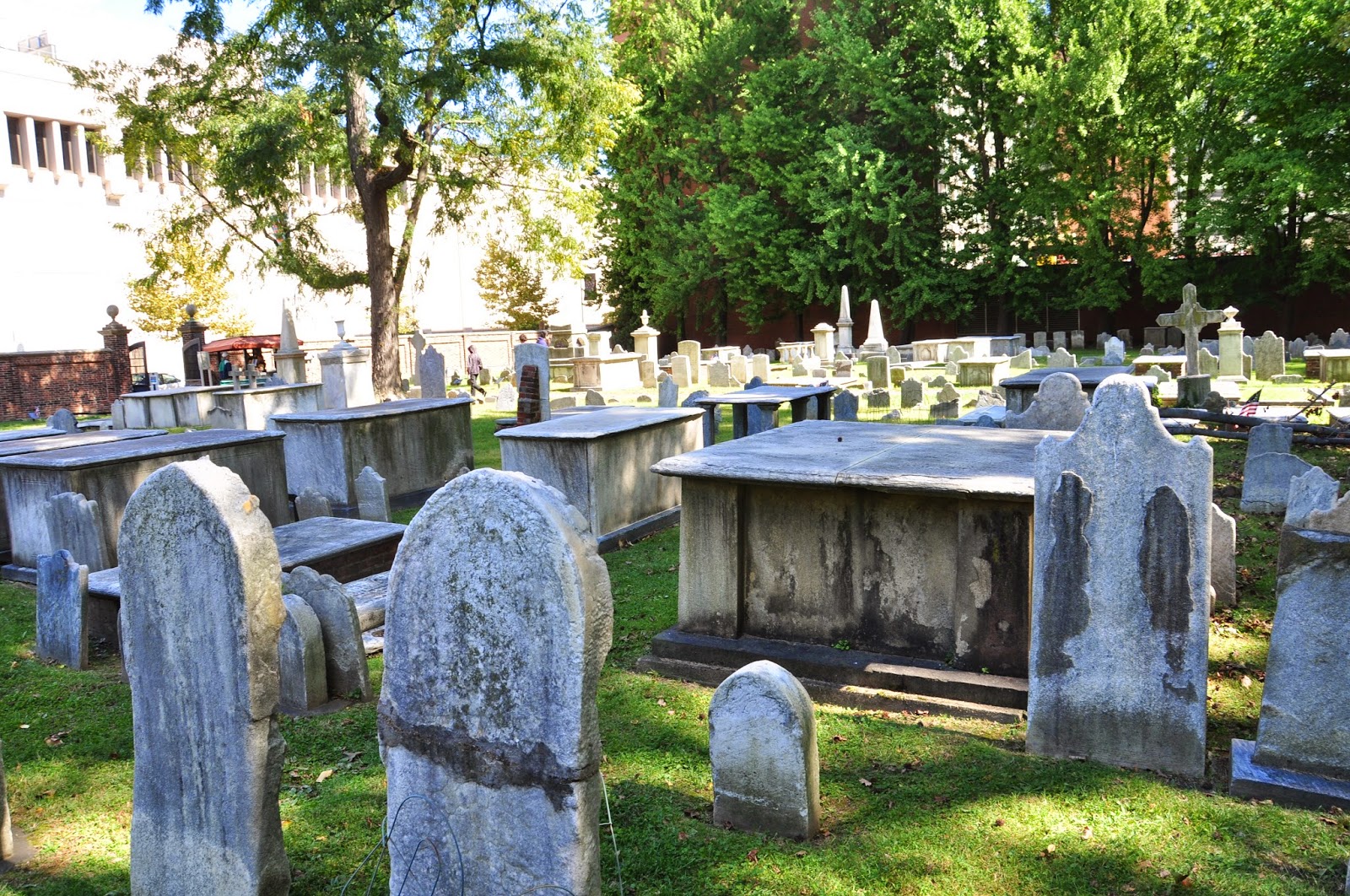 Located three blocks from the Church, and just across the street from the Visitors' Center, the Burial Ground is the final resting place for some of our most prominent leaders, including Benjamin Franklin. You'll know Franklin's grave when you see it -- it's covered with pennies. The graveyard caretakers routinely sweep up the coins, which help fund the care and maintenance of the burial ground. With seven signers of the Declaration of Independence and five signers of the Constitution buried here, the church and the burial ground together form a national shrine, giving inspiration and hope today as it did to the Founding Fathers centuries ago.

Don't go to the Burial Ground expecting to read the tombstones: they are badly eroded and most of the inhabitants rest in anonymity. Luckily, however, there are placards at the most famous graves -- the commodores, the signers of the Declaration of Independence, the notable notable. You can also purchase maps of the graves for less than a dollar at the Christ Church gift shop. 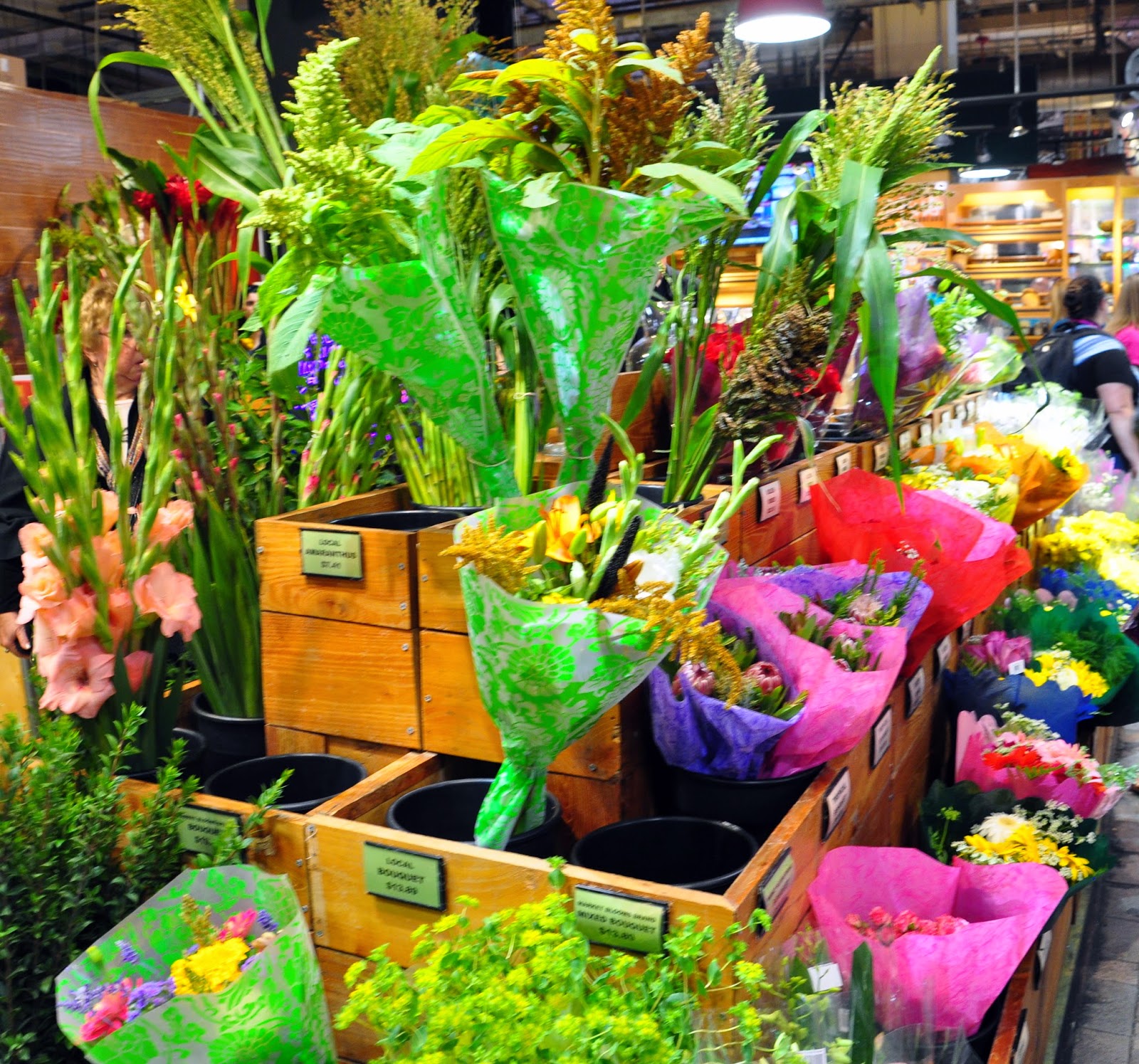 From there we headed over to Reading Terminal Market, at 12th and Arch Streets in downtown Philadelphia, for a late lunch -- a "linner," we call it, because it could also be an early dinner. Our goal of course was to enjoy the food that Philly is famous for: the cheesesteak. Several individuals, including the gals selling cookies at the Famous 4th Street Cookie Company, recommended Carmen's.

More than a hundred merchants offer fresh produce, meats, fish, groceries, ice cream, flowers, baked goods, crafts, books, clothing, and specialty and ethnic foods. The Reading Terminal Market occupies the ground floor and basement levels of the Reading Terminal's former train shed, now part of the Philadelphia Convention Center. The colors and commotion and the delicious smells of the variety of foods were thrilling and overwhelming. So much to see, so much to choose from. 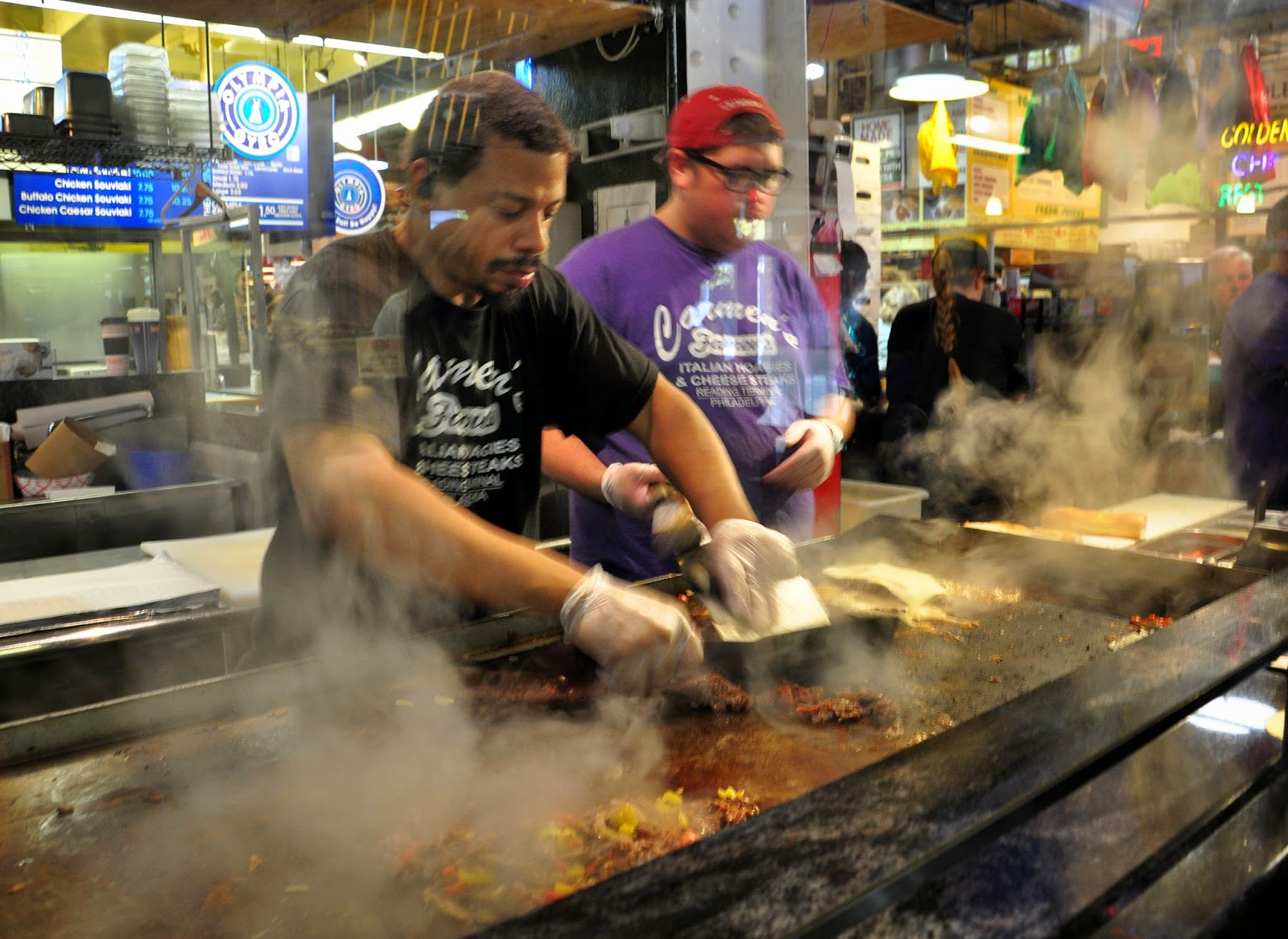 Have you daytripped somewhere interesting? I'd love to hear what you're doing! Email [email protected] if you're interested in being a guest-blogger!
Posted by Jody Arneson at 5:43 PM