The Covered Bridges of Frederick County

My 16-year-old son needed more driving hours, so we headed out one Saturday afternoon last summer on an impromptu and entirely unplanned "day trip." We ended up checking out the three covered bridges of Frederick County: Roddy Road Bridge, Utica Mills Bridge, and Loys Station Bridge. It was a win-win. He got some highway experience, some twisty winding country road experience, and four more hours of drive-time; for my part, I received a few more grey hairs ("no, you really don't need to drive that close to that car" and "watch out for that motorcyclist!!") but I had a fun afternoon photographing covered bridges, which I turned into a blog post.

Whether you live in Maryland or another mid-Atlantic state, there are likely some quaint covered bridges within driving distance.

Frederick County boasts three of Maryland's remaining eight covered bridges. All three bridges are listed on the National Park Service’s National Register of Historic Places and are conveniently located in northern Frederick County, within 12 miles of one another.

At one point, there used to be 52 of them in Maryland -- mostly in the central and western counties -- but between storms, fires, floods, and simply progress, most have been destroyed. In their hey-day, covered bridges were present on most of the major pikes, including US 40, and Buckeystown and Jefferson Pikes. The summer storms of 1889 and the subsequent flooding destroyed many of the bridges, especially those over the Monacacy River. 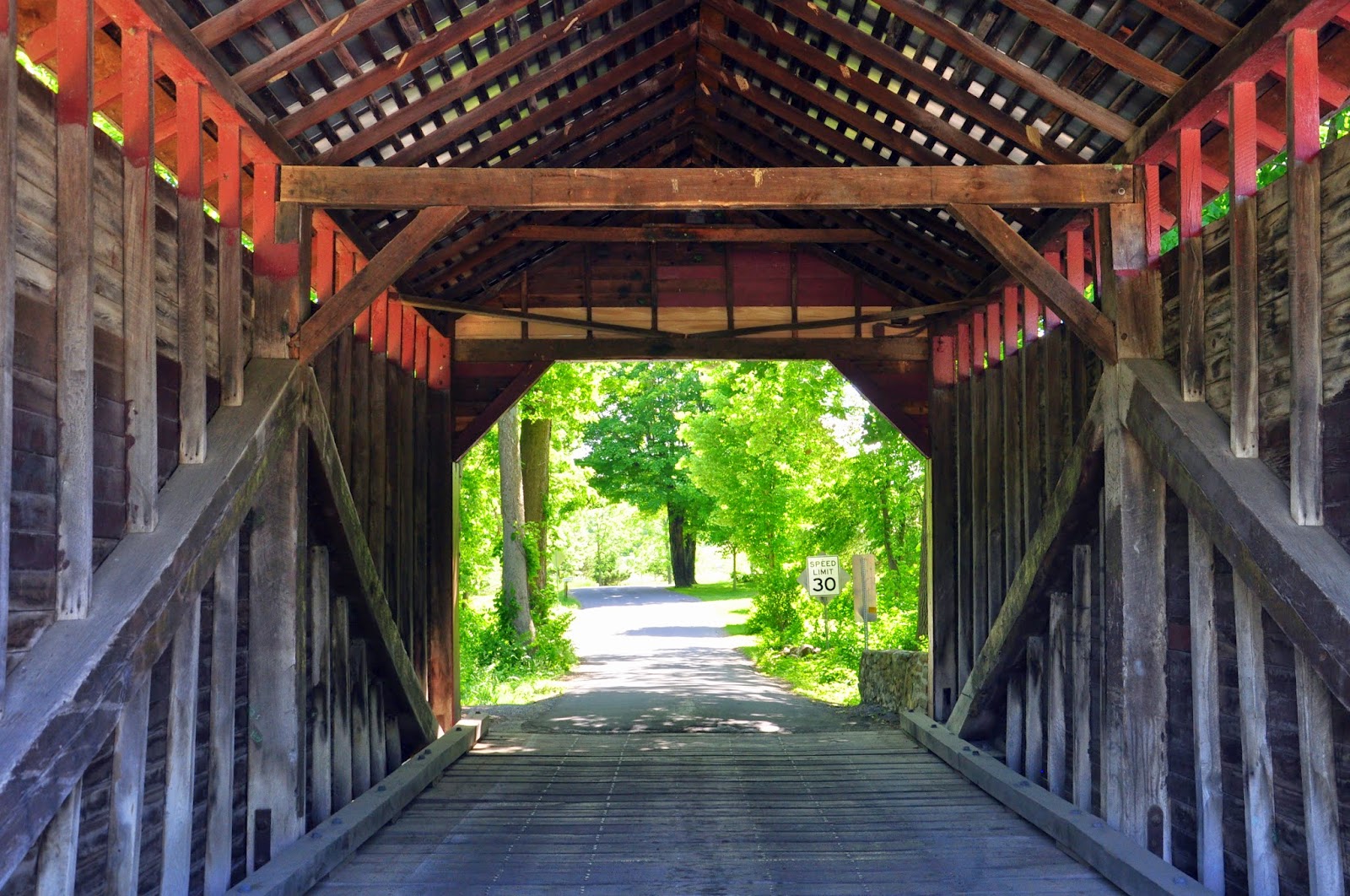 If you're interested in architecture or bridge design, the three covered bridges of Frederick County provide a good comparative study of wood bridge truss techniques, as each displays a different truss design. The remaining three bridges have been in continuous use since they were built in the latter half of the 19th century. 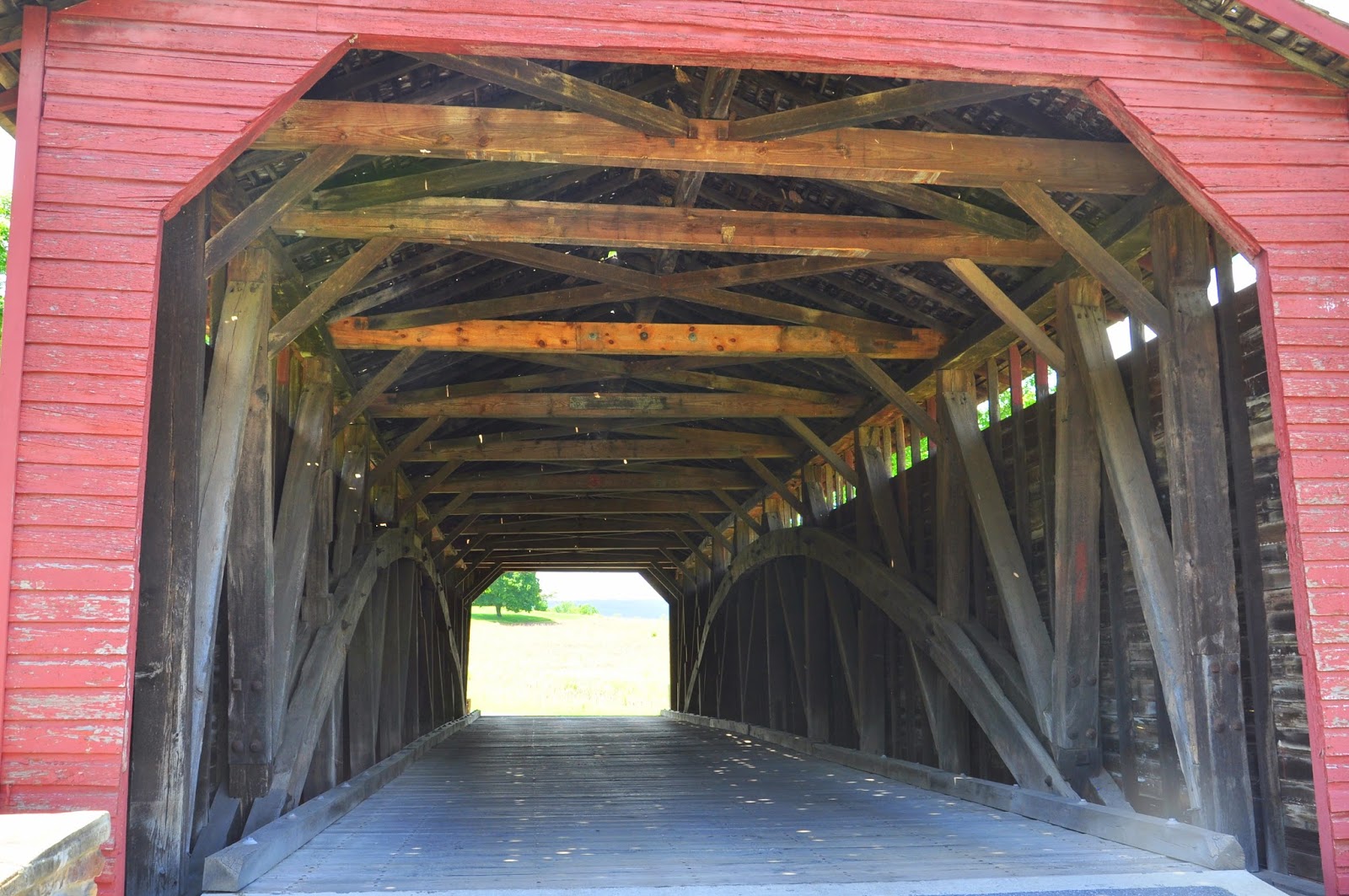 So what's with the roof? Many believe that the bridges were covered to prevent animals, such as horses drawing a carriage, from being spooked by the flowing waters below while entering or crossing the bridge. Another belief is that the animals would gladly cross the bridge thinking they were entering a barn (clearly those who believe that don't know animals very well). Some have suggested that the cover provides shelter for travelers in case of inclement weather. On the face of it, it seems silly to cover a bridge, but in an era when the building materials were likely to be only wood, the roofs protected the wood trusses from the wind, snow, and rain. This was the technology and engineering of choice until steel trusses replaced wooden trusses as the go-to material for bridge-making. Ironically, all three bridges are now supported by modern steel beneath, ensuring the bridge is strong enough for today's vehicles. 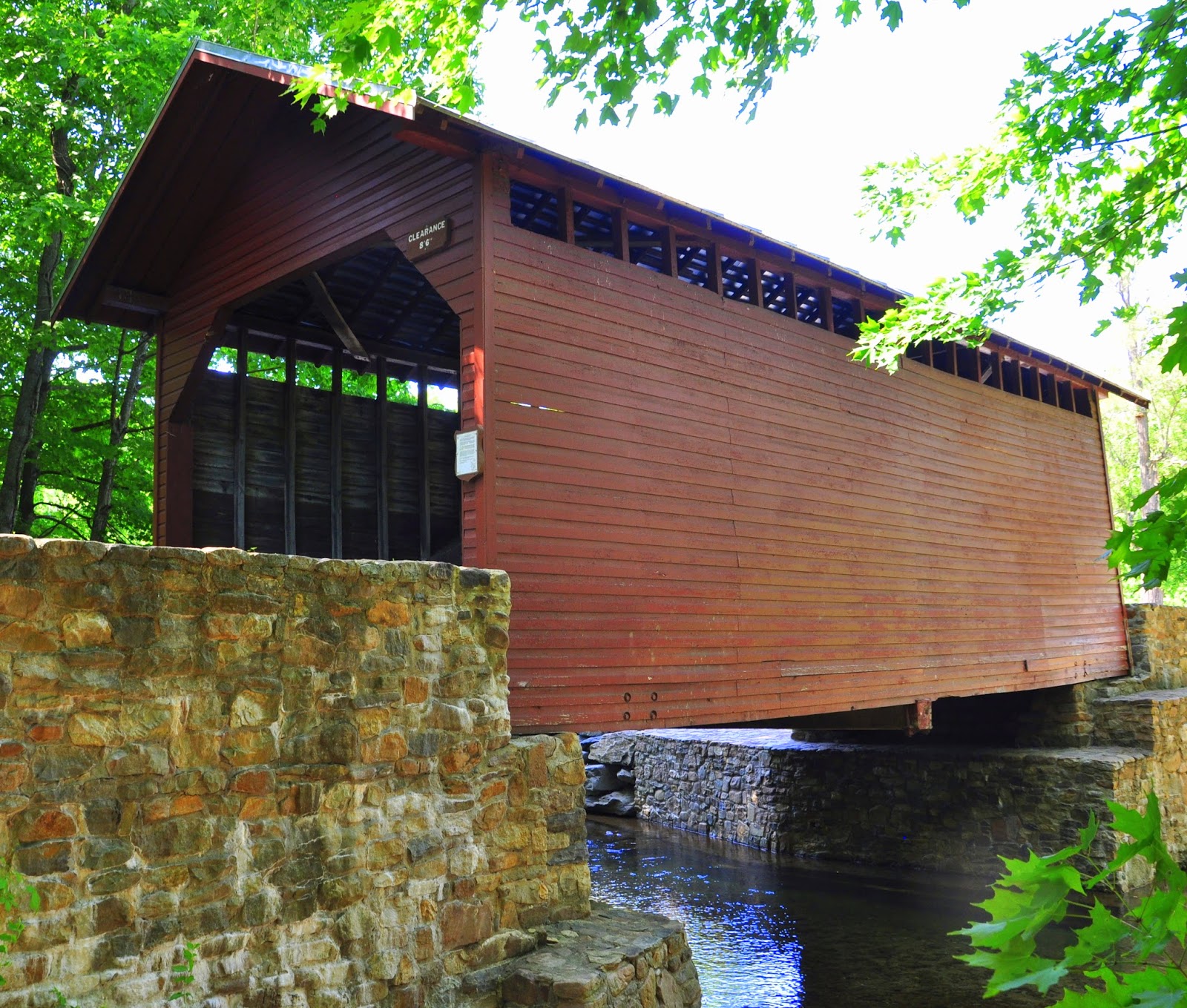 The smallest -- and my favorite -- of the bridges we saw, the Roddy Road covered bridge, was built in 1856 by the Roddy family (of course!), and rests just north of Thurmont off of US 15, where Roddy Creek Road meets Roddy Road at Owens Creek. 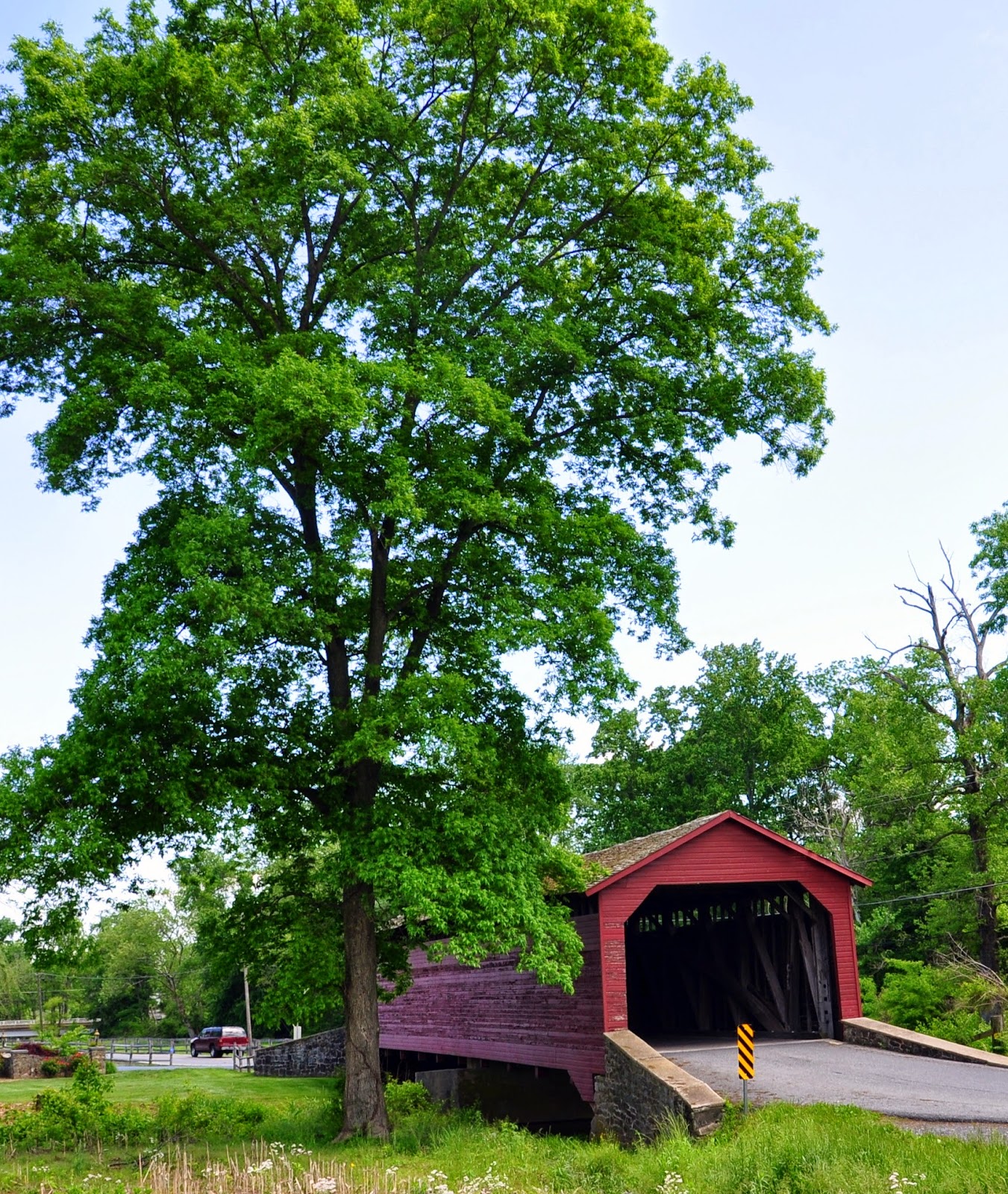 The Utica Mills Covered Bridge, circa 1850, is located on Utica Road off of Old Frederick Road. The bridge originally spanned the nearby Monocacy River but like many similar bridges, was washed away during the 1889 floods. Thrifty local citizens salvaged the remains and reconstructed the 101-foot long Burr Arch design bridge at its present location crossing Fishing Creek, where it's been ever since.

First constructed circa 1880, the Loy's Station covered bridge is on Old Frederick Road, just south of Rt. 77. Although it has been structurally modified and rebuilt, the bridge's original timbers remain throughout the 90-foot long structure crossing Owens Creek. It features a multiple Kingpost design.

Nearly 14,000 authentic wooden covered bridges once existed in the United States. Today, less than 900 are still standing, and most of these are more than 150 years old. Sadly, these remnants of a by-gone era continue to decrease across the United States, making the three in Frederick County precious and worth protecting. 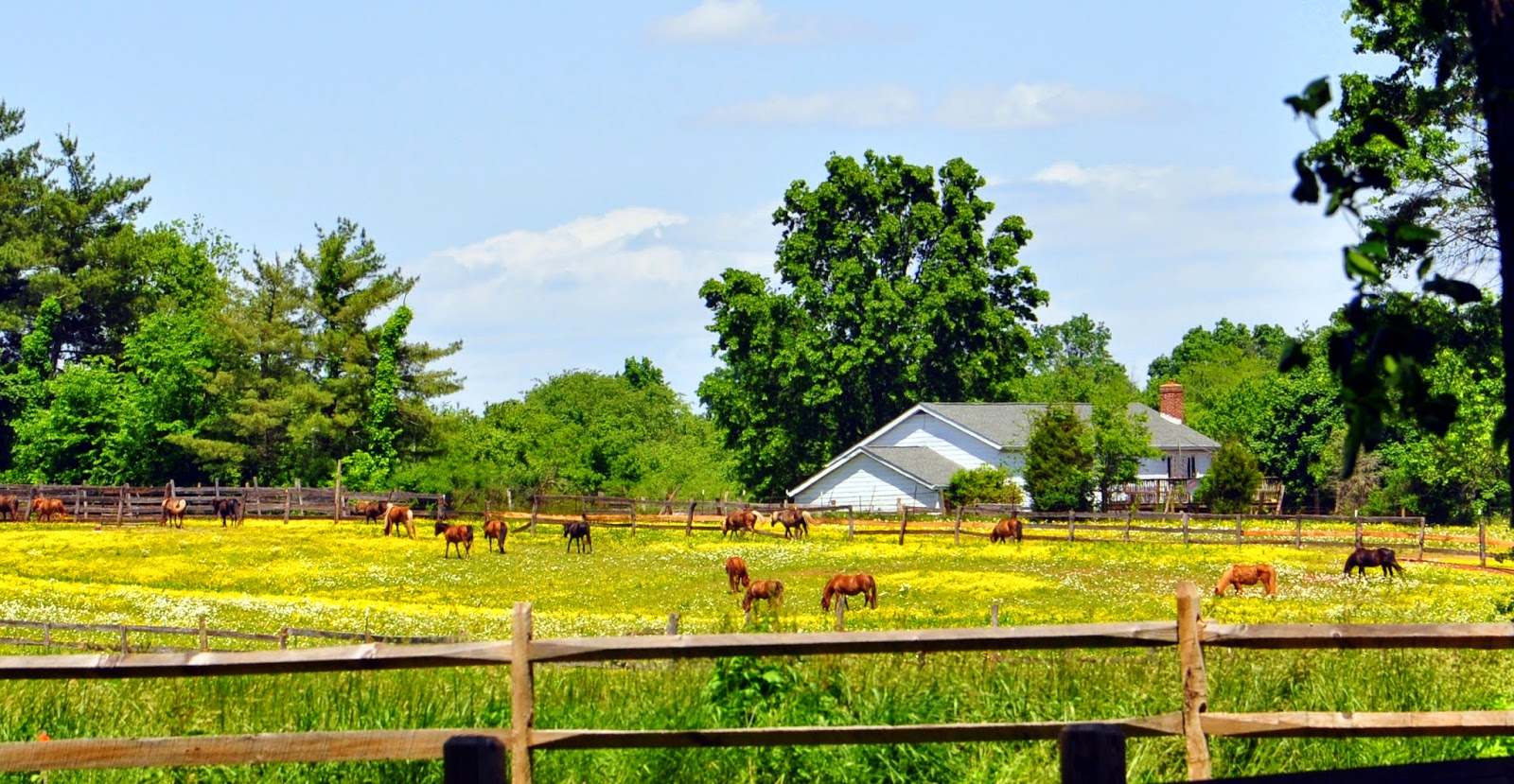 In case you're wondering, there is a fourth covered bridge in Frederick County, in Frederick itself, spanning Carroll Creek in Baker Park. Although very cool, this is not an authentic covered bridge, i.e., one that's existed since the 19th century; it was erected in 1965 by the city of Frederick.

Tip#1: There are several wineries located nearby. Combine going to one or two wineries with the covered bridges for a full day! Cunningham Falls State Park and Catoctin Mountain National Park are also close by; both offer hikes (the falls are lovely but the view from Chimney Rock in the national park is worth the uphill climb!).

Tip#2: Pack a picnic to enjoy on the creek by Loys Station Bridge -- there's a lovely little park that provides a nice setting to while away a warm afternoon.

Dogs: Beagles would find themselves bored by an afternoon taking photographs of bridges, but if you were to take them on a hike in nearby Catoctin Mountain National Park, now you're talking!!

Have you daytripped somewhere interesting? I'd love to hear what you're doing! Email [email protected] if you're interested in being a guest-blogger!
Posted by Jody Arneson at 7:36 PM