The Niagara River flows north from Lake Erie to Lake Ontario, forming part of the border between the Province of Ontario in Canada (on the west) and New York State in the United States. And although they are famous now, they've been well known, even outside of North America, since the late 17th century, when Father Louis Hennepin, a French explorer, first witnessed them. He wrote about his travels in A New Discovery of a Vast Country in America (1698).

The falls have moved almost 7 miles upstream from the Niagara Escarpment in the last 12,000 years, resulting in a gorge below the falls. Today, the diversion of the river for electrical generation has significantly reduced the rate of erosion and ever so slightly tamed the rapids. The Niagara Gorge extends downstream from the Falls and includes the Niagara Whirlpool and another section of rapids.

It is this section of rapids that we are focused on in this post. Although not the Class VI rapids of the upper Niagara Gorge, these Class IV and Class V rapids are scary enough.

The rapids, when seen from the shore, look beautiful and really, not all that threatening, especially to those of us unfamiliar with actual experience on rapids such as these. From the shore, they look fun, not deadly. 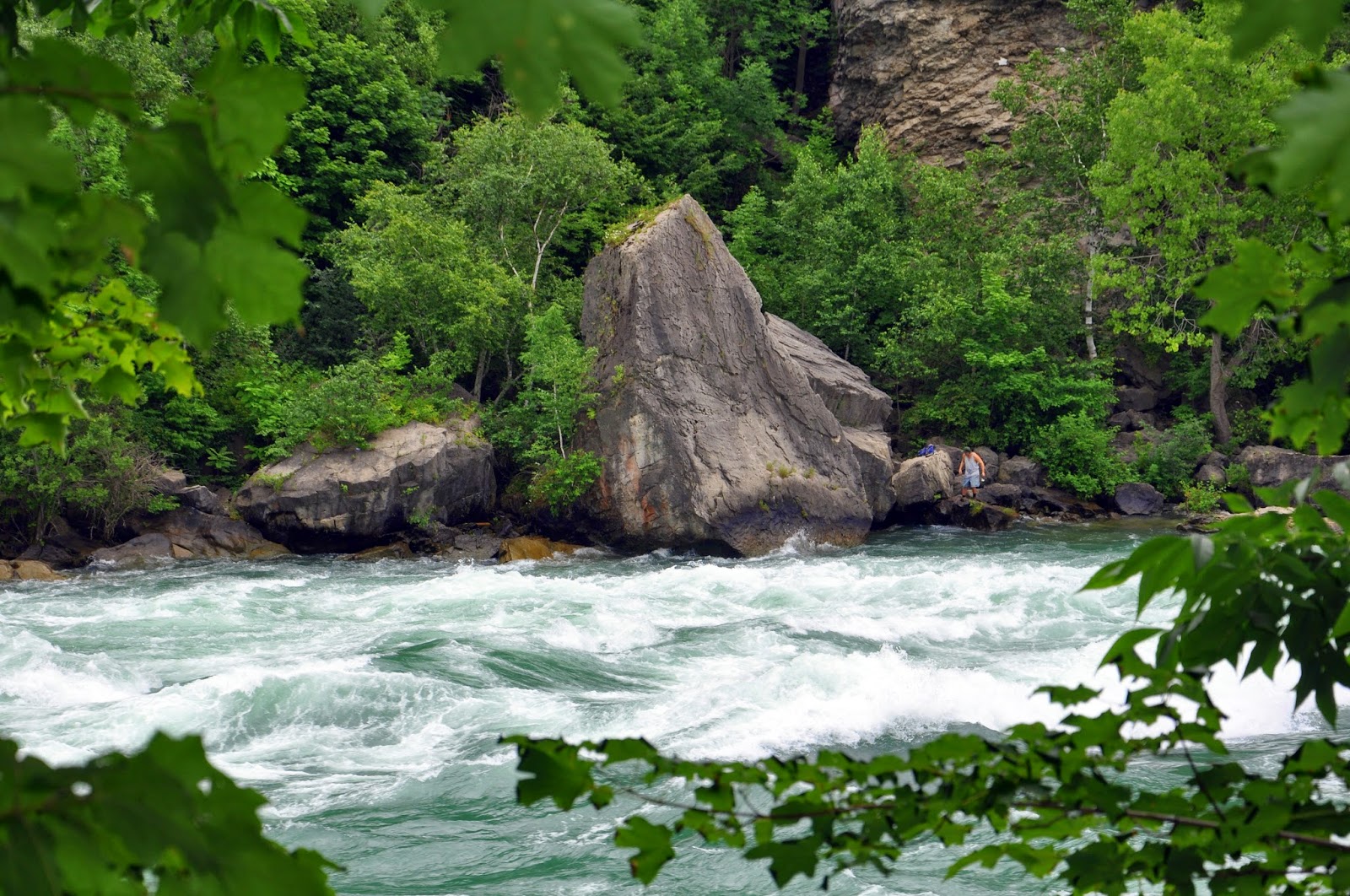 When viewed from a boat skimming across the top and superfluously dunking its riders in particularly high waves, I learned that these rapids induce mind-numbing, scream-inducing terror.

It was in an effort to be cool -- cooler than my ex, which, although not really hard to do, the competition is still felt keenly -- that I suggested, timidly, that we take the Jet Boat Ride to the Whirlpool. I felt sure that cooler heads would prevail, that my friend Barb would bail, thereby offering me an out, that my husband would persist in his allergy to boats, removing the final adult from possibly going. Or maybe someone with some financial sense might object to the expense. 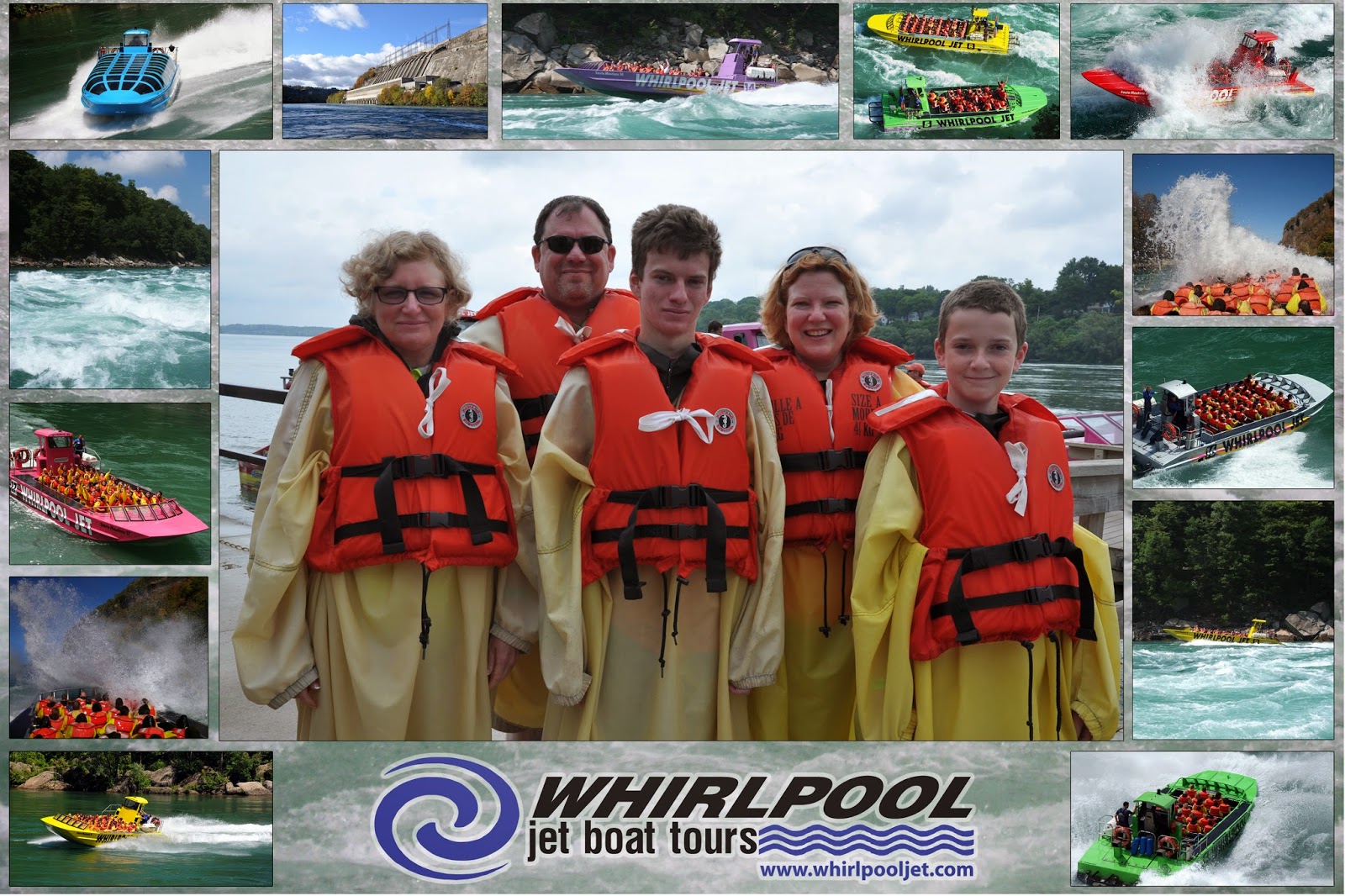 "Sure let's!" they all said, calling my bluff.

The idea of the jet boat tour is exciting and fun. They seem to go REALLY fast and indulge in a few splashes, what's the harm in that?

Thus it was on a rainy summer morning that we arrived at the launch point and donned rain ponchos (which are ridiculous in light of the actual protection against wet they afford, which is to say, none at all) and life preservers, which I knew to be futile against the pull of the Niagara Whirl Pool... said to relentlessly pull down anything that dares ride its surface into a soggy death 100 feet below.

They announced that the ride is scariest and splashiest in the front couple of rows. My eldest son immediately volunteers that he'd like to sit in the front row, and asks me to do so with him. With the coolness factor in mind, I blithely say, "Sure, it'll be fun." Afterall, I have my water poncho...

My grandmother was a worrier. She worried about things that could happen, things that might happen, and things that would probably never in a million years happen. I am her granddaughter in so many ways. I worry, too. It's a full-time hobby.

There are many things to worry about regarding the jet boat tour. For starters, what if it's the captain's first time soloing the tour? (That occurred to me AFTER we'd left the dock.) And just how young is he anyway? OMG, he's young enough to be my child. ... Aren't young 20-somethings reckless? What if he takes unnecessary chances? What if someone falls off? What if my child falls off? What if I fall off? And so on ...

And there I am, in the front row. With my child. (My other son, younger but wiser, chose to sit a few rows back, with a grateful Barb and my husband in tow.) I realize AFTER the boat leaves dock that I should be on the outside, that being on the inside would be safer for my son. Too late. I worried some more.

But the jet boat turned north, going toward the calm waters of the mouth of the Niagara River. Maybe this will be okay, I think. The tour guide is saying something about a hamilton turn and there we go, into this steep 360 degree turn. Holy cow! So much for a placid ride.

It's been a good life. I really have nothing to complain about. Nor even many regrets.

They do it again, just to make sure we're awake.

And then they head up to those rapids in the lower gorge, the ones that look so pretty from the safety of the shore.

They talk about how they're going to CLIMB the rapids -- how is that even possible? Well, they tell you why! The boat has three engines, each a gazillion horsepower, which gives it the power to climb up terrifying rapids, and the boat's flat bottom enables it to skim on top of the water, thereby avoiding any rocks or scary things below the water's surface.

They demonstrate the boat dipping into a rapid, just to get our feet wet, so to speak. Then they do it again. They take the boat up the first set of rapids, then turn it around (hamilton turn again), give us a superfluous splash, go back down and do it all again.

Sitting in the front seat and experiencing those splashes is much like swimming, except you have no control. It is advised to hold one's breath in anticipation of the splashes, and to definitely keep your mouth closed (else you could drown, I worried). They actually warn you to grab hold of the bar and brace yourself as you go through these, else you risk falling out (I worried). There are no seat belts. I worried some more. A splash hit my ear so hard I could barely hear for two days out of it. I could feel and hear the water sloshing around inside my head (just more to worry about, but that was later on, after my heart rate had settled back close to normal at the end of the ride).

We eventually made it up to the Whirlpool, and since I'd already researched the Whirlpool, I knew (and worried) that if they got too close to it, we'd be sucked down, possibly never to emerge from our watery demise. They safely skirted the main action, then teased about heading further up the Class VI rapids. I knew from the Aero Car ride OVER the whirlpool that boats are neither capable nor allowed to take tourists up those rapids.

NOTE: However, enclosed jet boat tours are scheduled to begin later this year. Talk about scary!

Our guide talked about the whirlpool and then we safely turned around and headed back down. We did the splashes a few more times, then they brought us all the way down to the placid, peaceful part of the river, did a final hamilton turn (which now seemed rather tame), and suddenly we were back in the dock.

And you know what? It was REALLY fun!