Niagara Falls and all the Trappings

Last summer we spent a week exploring the Canadian side of Niagara Falls and Niagara-on-the-Lake. There is a lot to do up there for kids and adults alike. This is part of the six-part series of posts over the next three weeks about that trip and the fun times we had exploring the land up north!

I'd been to the Niagara Falls as a young child with my family. To be honest, I don't remember much from that trip, other than that my dad accidentally slammed his car door shut when I had my finger in the way. Sad that of a trip that included Niagara Falls, a boat ride (judging from the photos), and a trip to Montreal, all I remember is that one incident, and Dad's horrified reaction to the pain he'd accidentally caused. I'd wanted to bring my sons to see Niagara Falls for a couple years and to see the falls again for myself (maybe this time I'll remember them), but last year's concerns about the U.S. Government's furlough (which did occur in October 2013) caused us to postpone our Canadian vacation plans until this past summer. 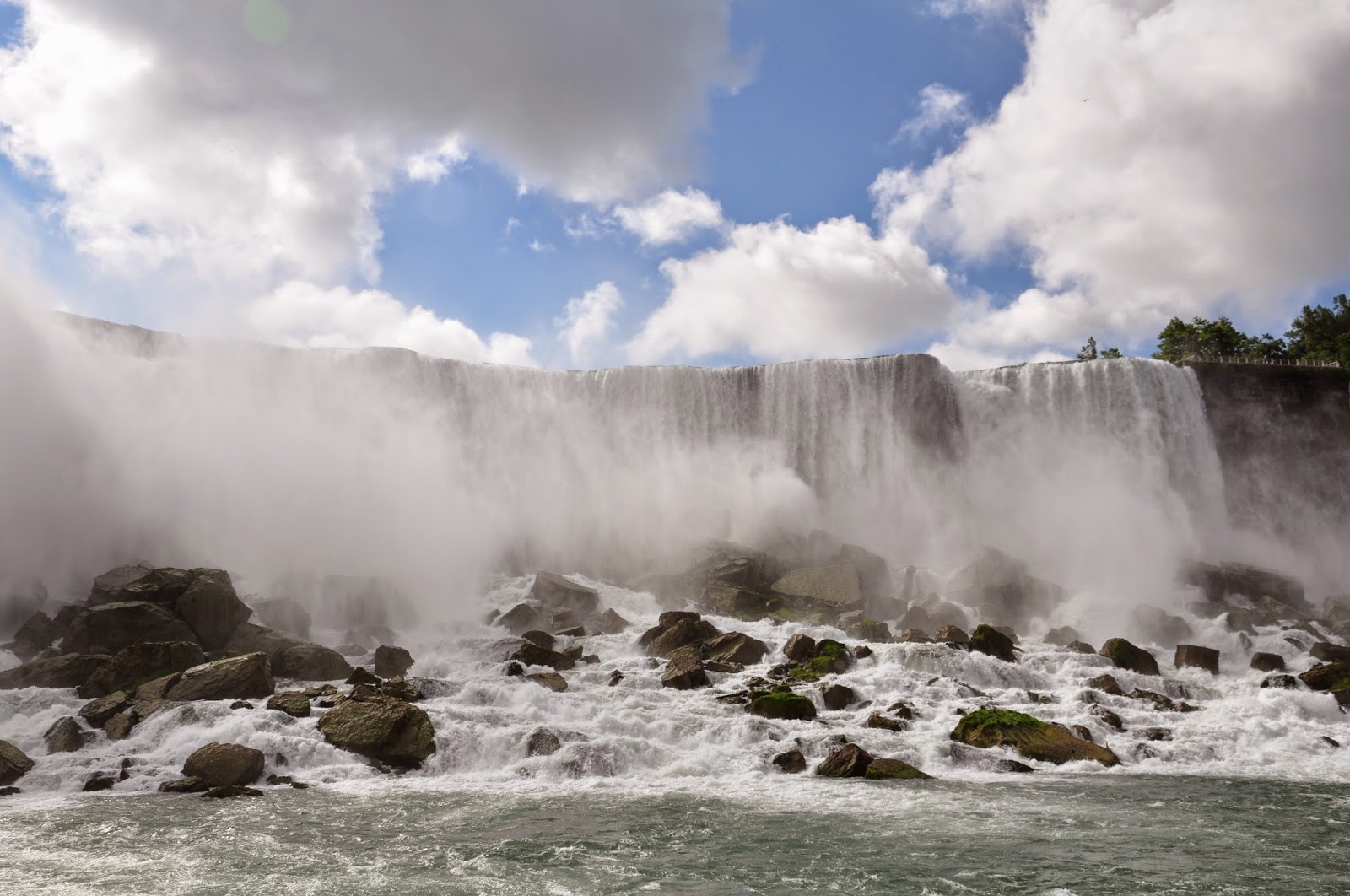 Niagara Falls, whether on the U.S. side or the Canadian side is tourist tacky and expensive. There are high rise hotels (some of which look very nice) but also wax museums and a museum of world records and casinos and all the things I usually try to avoid on family vacations. So we decided to stay in lovely and quaint Niagara-on-the-Lake (NoTL), a few miles further north along the Niagara Parkway, where the Niagara River flows into Lake Ontario. 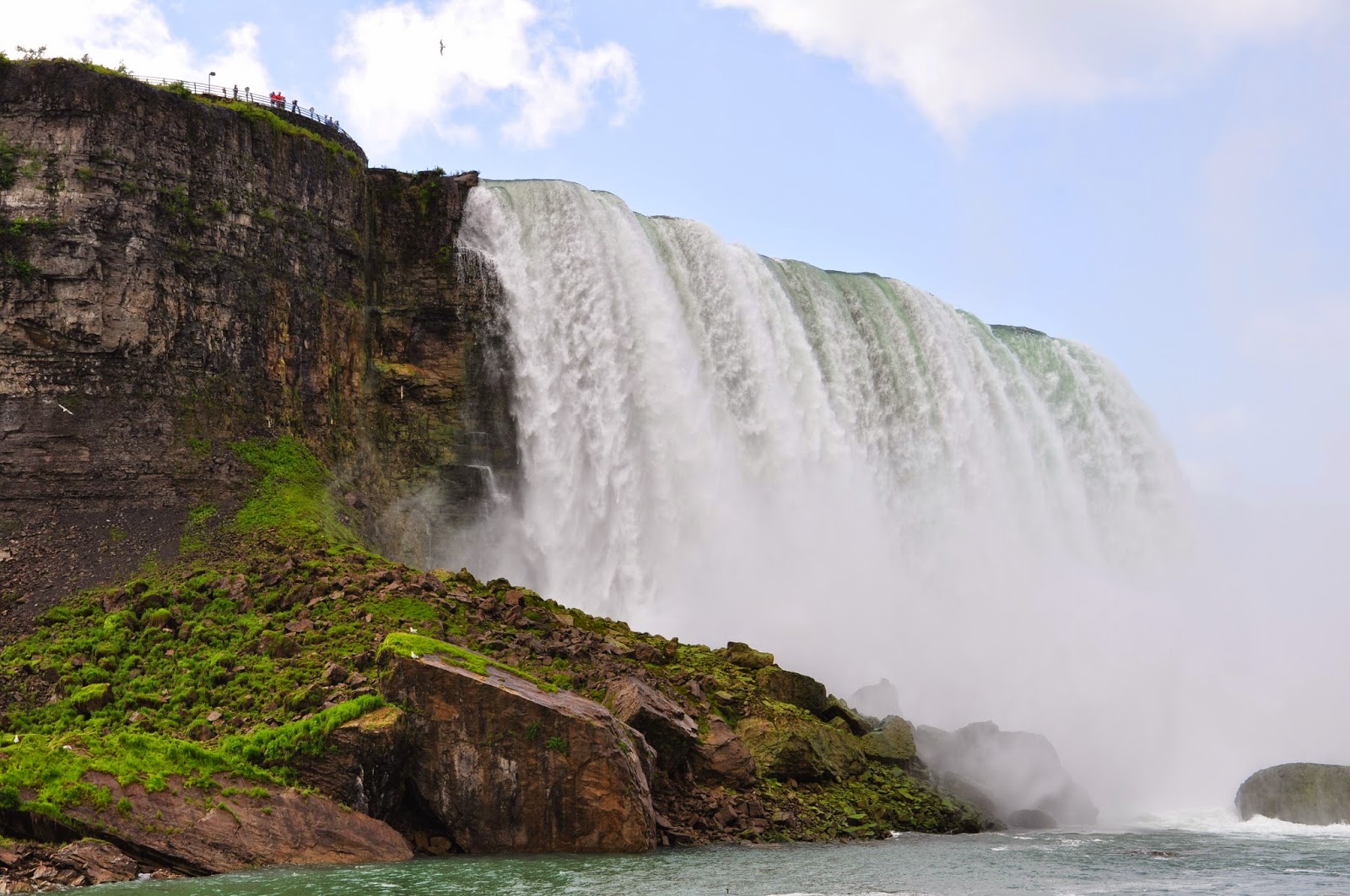 Your best, and closest, complete views of both the American Falls and the Horseshoe Falls are by boat -- either Maid of the Mist on the American side, or Captain Hornblower on the Canadian Side. Both issue flimsy but helpful ponchos to shield you from the drenching spray. While riding on the Captain Hornblower, we truly got to appreciate the huge, almost overwhelming magnificence of the falls. But in fact, it takes all the experiences -- going on the boat, going behind the falls, seeing them from above -- to even begin appreciating this wonder of nature.

We had purchased an Adventure Pass that gained us admission to four attractions: Captain Hornblower, Journey Behind the Falls, Niagara Gorge "White Water Walk," and "Niagara Fury." Although we'd purchased the passes online, we arrived in the morning and scheduled our entry times for all four attractions -- one of the benefits of the passes, as the attendant helped us figure out how long each would take and how long it would take to get from one place to the next. With the scheduling and an early arrival, it's an easy day to see all four in one day, although the ride-on pass is good for two consecutive days. Because we intentionally waited for a week day, the lines weren't too bad, despite it being prime tourist season in the middle of July.

We went early, so had no problems finding parking in a designated parking lot near the main building. Captain Hornblower, Thunder Behind the Falls, and the White Water Walk were all within easy walking distance, as was Elements on the Falls restaurant, where we ate a tasty lunch overlooking the falls. Although we could have used the ride-on pass to take a bus up to the White Water Walk, we decided to just drive it, and then proceed from there back to NoTL. 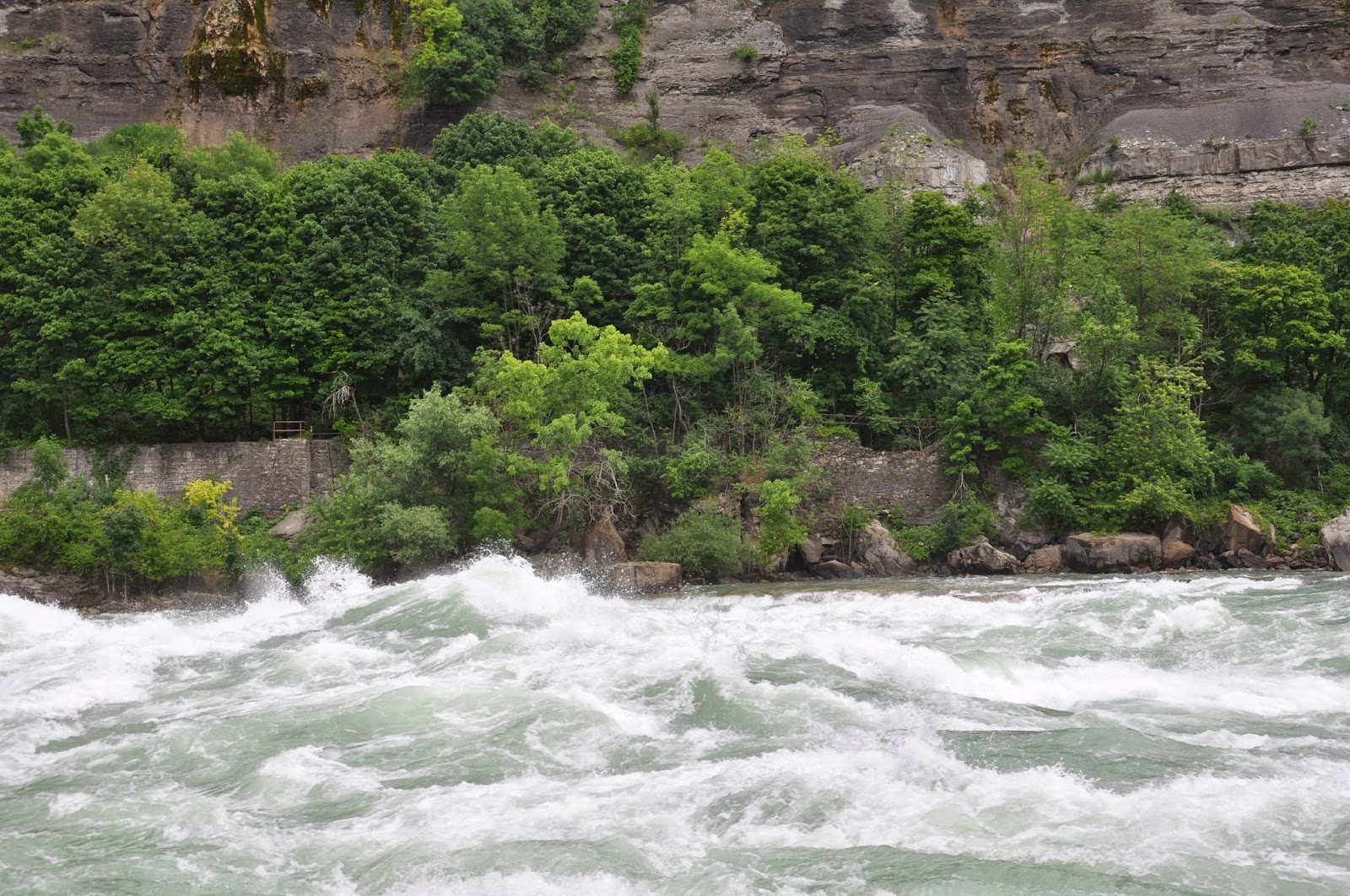 Although we'd expected the White Water Walk to be anti-climatic, we were pleasantly surprised by it -- and were glad we'd not missed it. To see the rapids just a few feet away, from a safe vantage point, was amazing and impressive. What was even more awe-inspiring is that the rapids aren't caused by rocks beneath the water, as with most other river rapids. The rapids are caused by the sheer turbulence of the huge amount of water being squeezed between the two sides of the gorge. These are Class 6 rapids -- impressive and deadly. 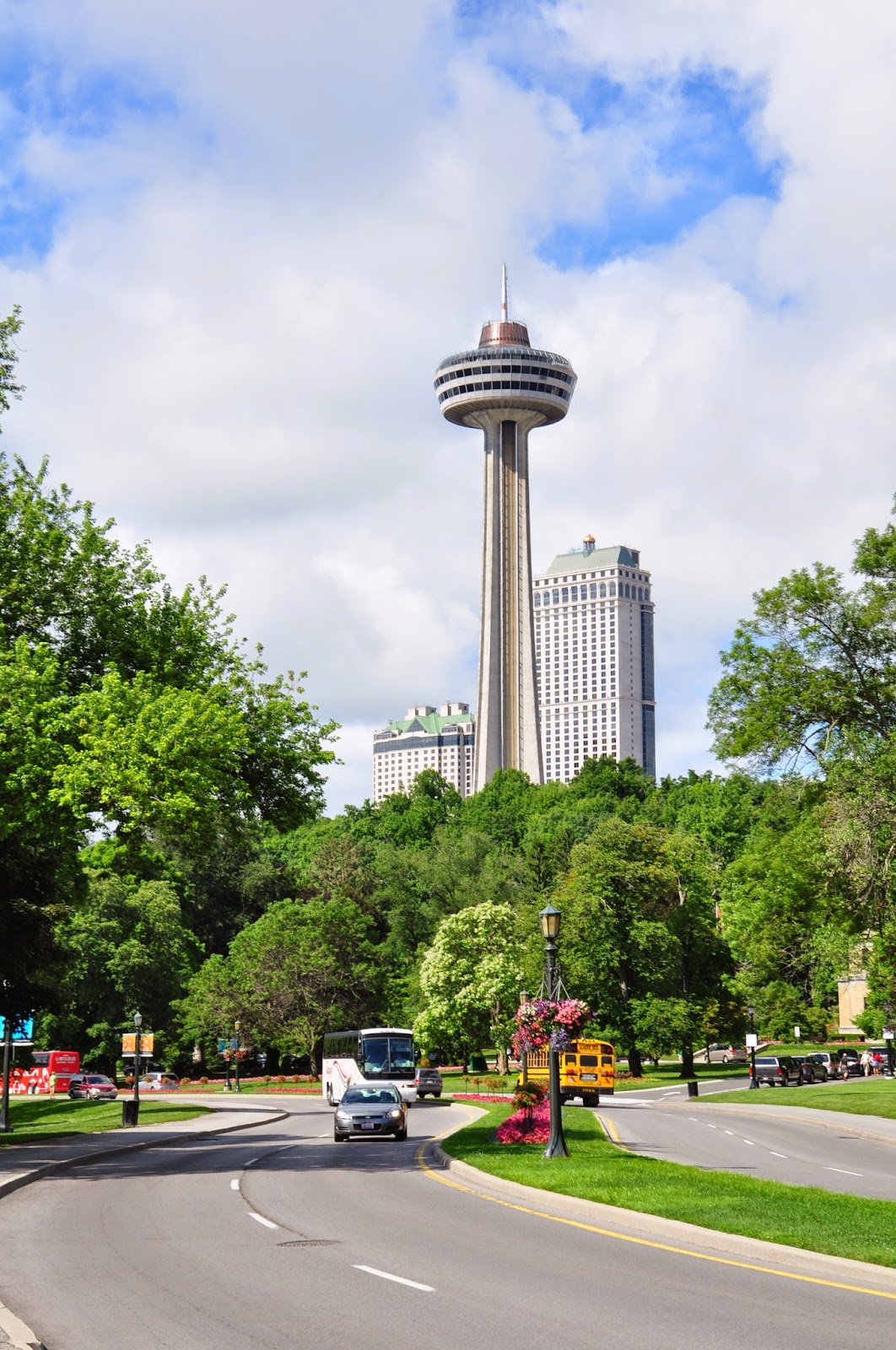 Located on the Niagara River, which drains Lake Erie into Lake Ontario, the combined falls form the highest flow rate of any waterfall in the world, with a vertical drop of more than 165 feet. Horseshoe Falls is the most powerful waterfall in North America, as measured by vertical height and by flow rate.

Niagara Falls were formed when glaciers receded at the end of the Wisconsin glaciation (the last ice age), and water from the newly formed Great Lakes carved a path through the Niagara Escarpment en route to the Atlantic Ocean. While not exceptionally high, the Niagara Falls are very wide. More than six million cubic feet of water falls over the crest line every minute in high flow. 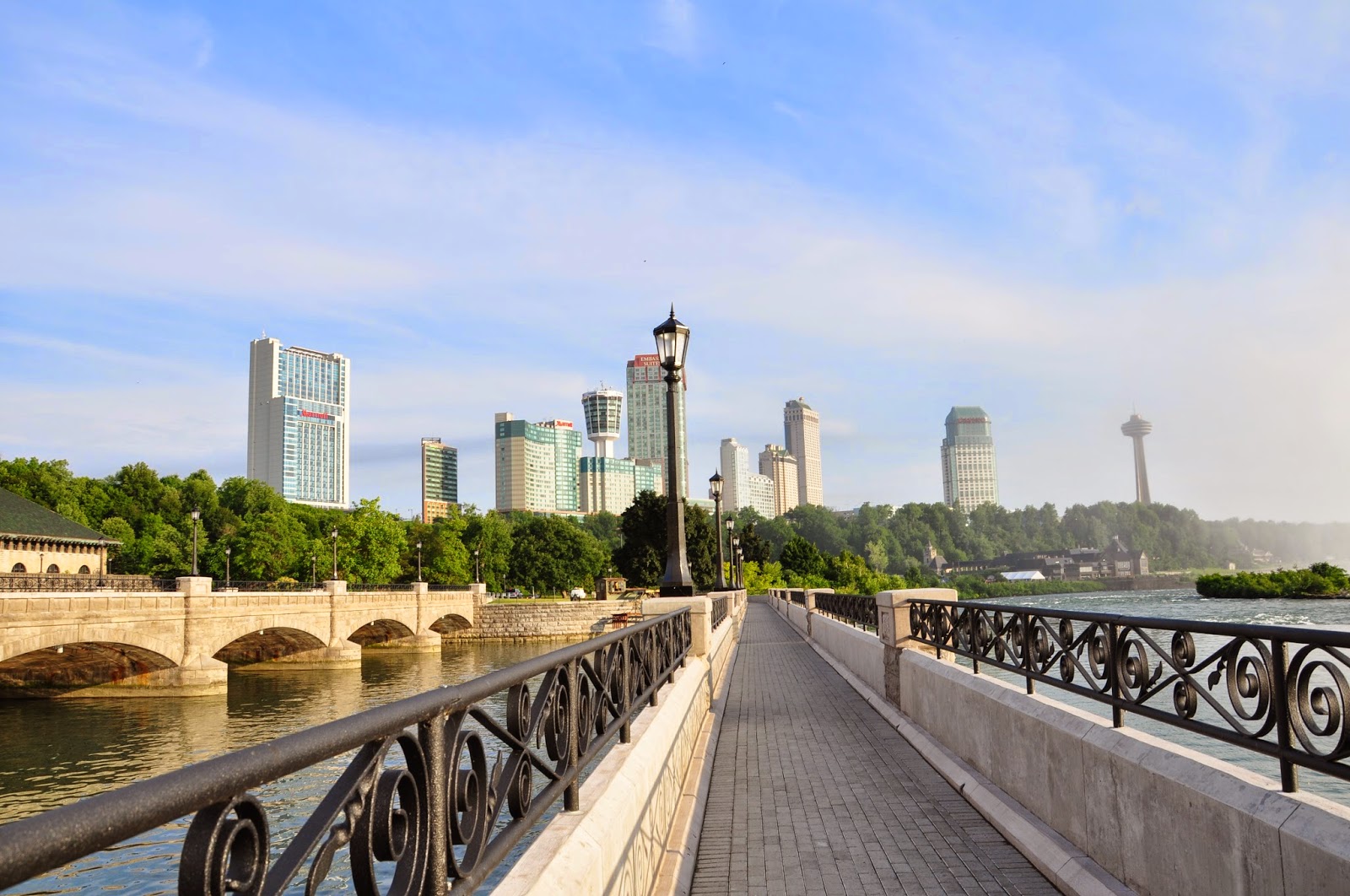 The striking green color of the water flowing over the Niagara Falls is a byproduct of the estimated 60 tons/minute of dissolved salts and "rock flour" (very finely ground rock) generated by the erosive force of the river itself. The current rate of erosion is approximately 1 foot per year, down from a historical average of 3 feet per year -- reduced because of all the water diverted to power the hydroelectric plans on both sides of the river. It is estimated that 50,000 years from now, even at this reduced rate of erosion, the remaining 20 miles to Lake Erie will have been undermined and the Falls will cease to exist.

We weren't disappointed by the Falls. They were "awesome," according to my teenage sons. I checked this off as a successful vacation!

There are differing theories as to the origin of the name of the falls. According to Iroquoian scholar Bruce Trigger, "Niagara" is derived from the name given to a branch of the locally residing native Neutral Confederacy, who are described as being called the "Niagagarega" people on several late 17th century French maps of the area.

On October 24, 1901, 63-year-old Michigan school teacher Annie Edson Taylor was the first person to go over the falls in a barrel as a publicity stunt; she survived, bleeding, but virtually unharmed. Soon after exiting the barrel, she said, "No one ought ever do that again." Well, unfortunately, no one listened to her, and there were multiple additional attempts since then, some sanctioned by local authorities and even more accidental or unsanctioned publicity stunts.

And sadly, the splendor and the fury of the Falls seems to attract those who can't see any way out of their problems. According to local news reports, there are numerous successful and nonsuccessful suicide attempts each year, in addition to folks who simply fall by accident into the river -- almost one a week, according to one of the local vendors -- and unfortunately, the evening we visited the falls at night to see the spectacular colored illumination of the falls was marked by helicopters with search lights and the Captain Hornblower boat searching for the body of someone who gave up the good fight and jumped over the railing, just 100 feet from us. It was sobering, in the face of the beauty of the evening, and what was supposed to be a light-hearted outing.

Know before you go: Purchase the Adventure Pass (for the Canadian side). You'll end up saving money on admission to all the various venues. However, you could easily skip the Niagara's Fury, which, although it explained briefly how the falls were created, didn't add all that much to the itinerary, and seemed to be just an additional excuse to herd tourists into lines, give us ponchos, and get us wet, again (yes, it rains inside the auditorium). 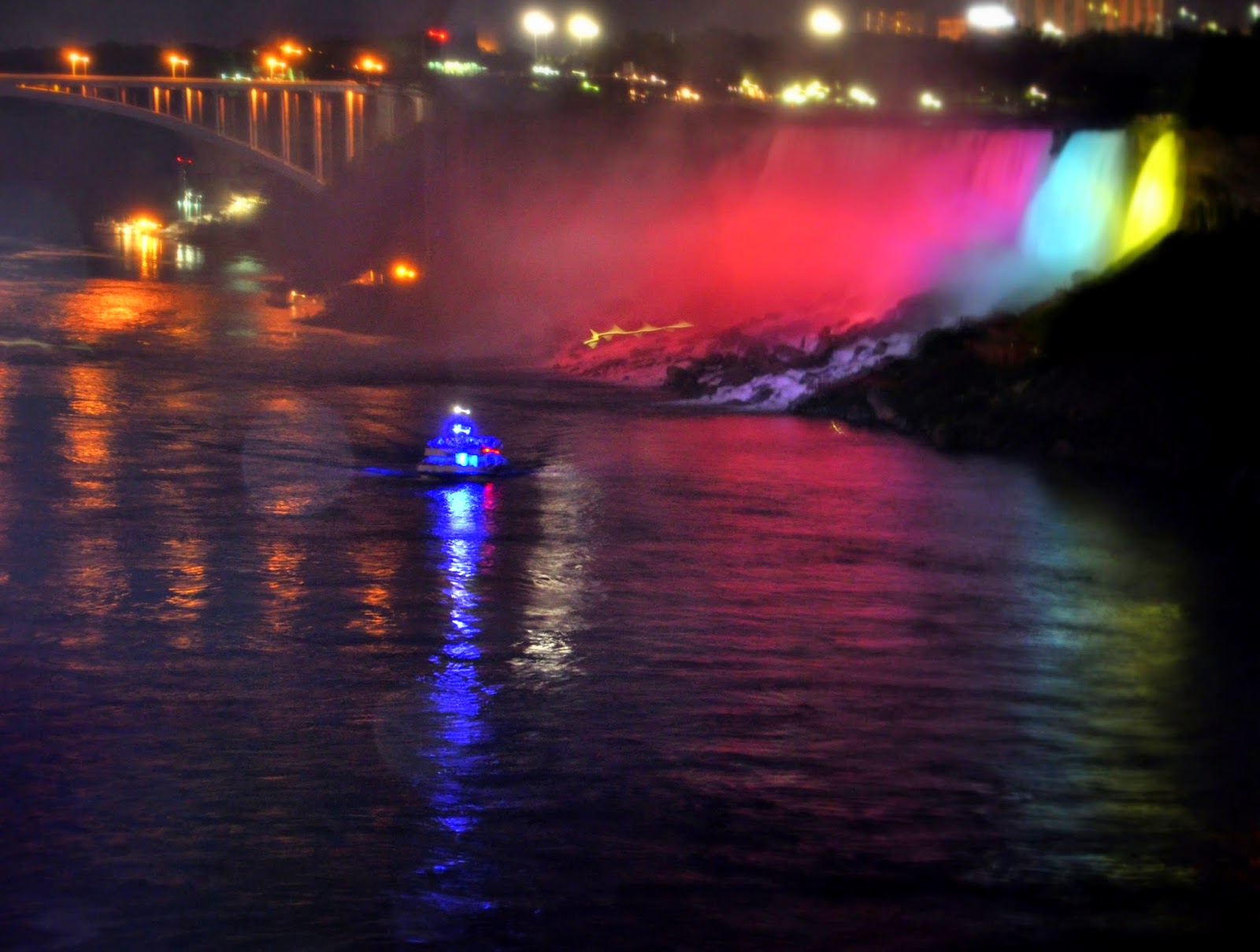 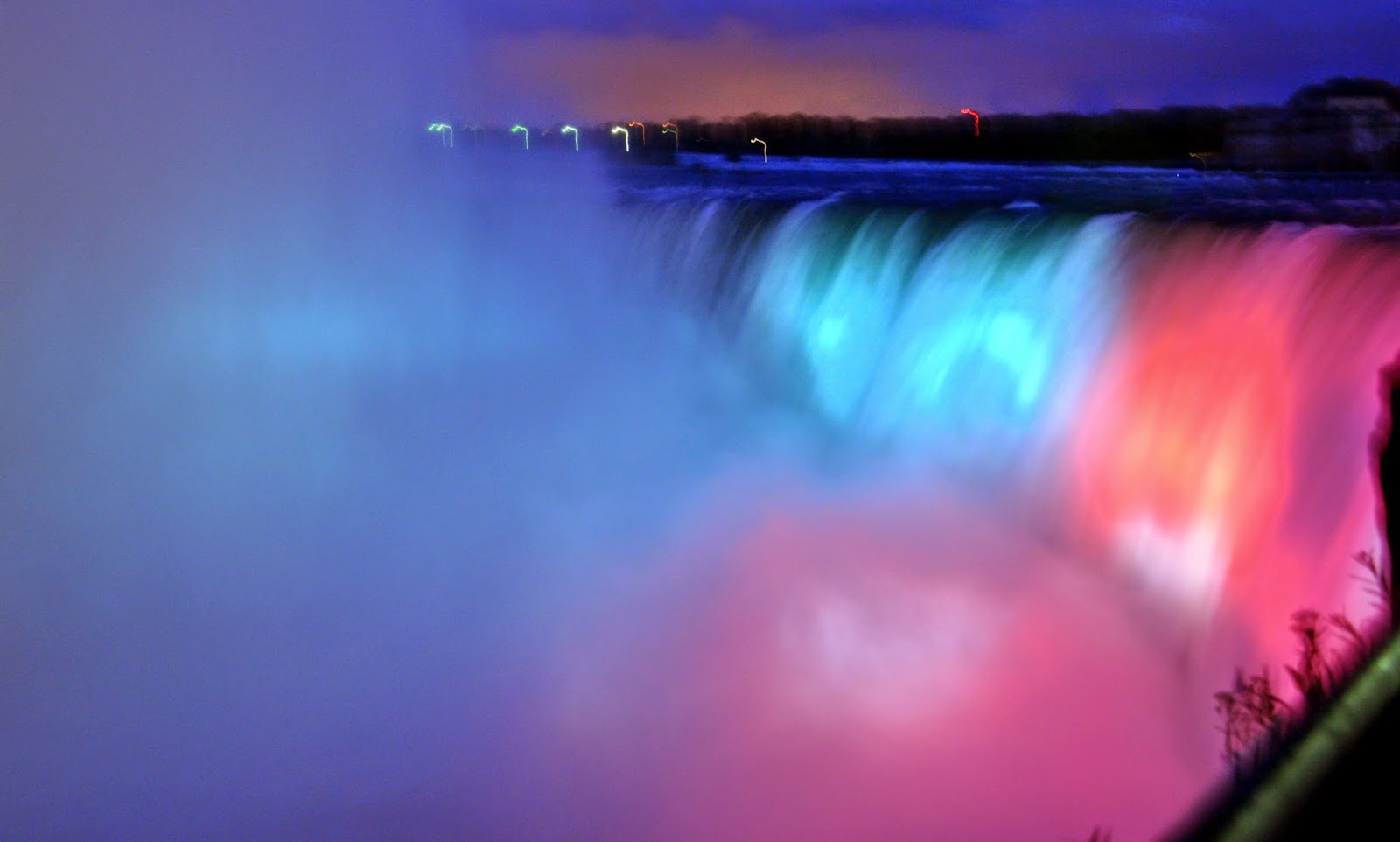