Niagara on the Lake: The Prettiest, Most Haunted Town in Canada 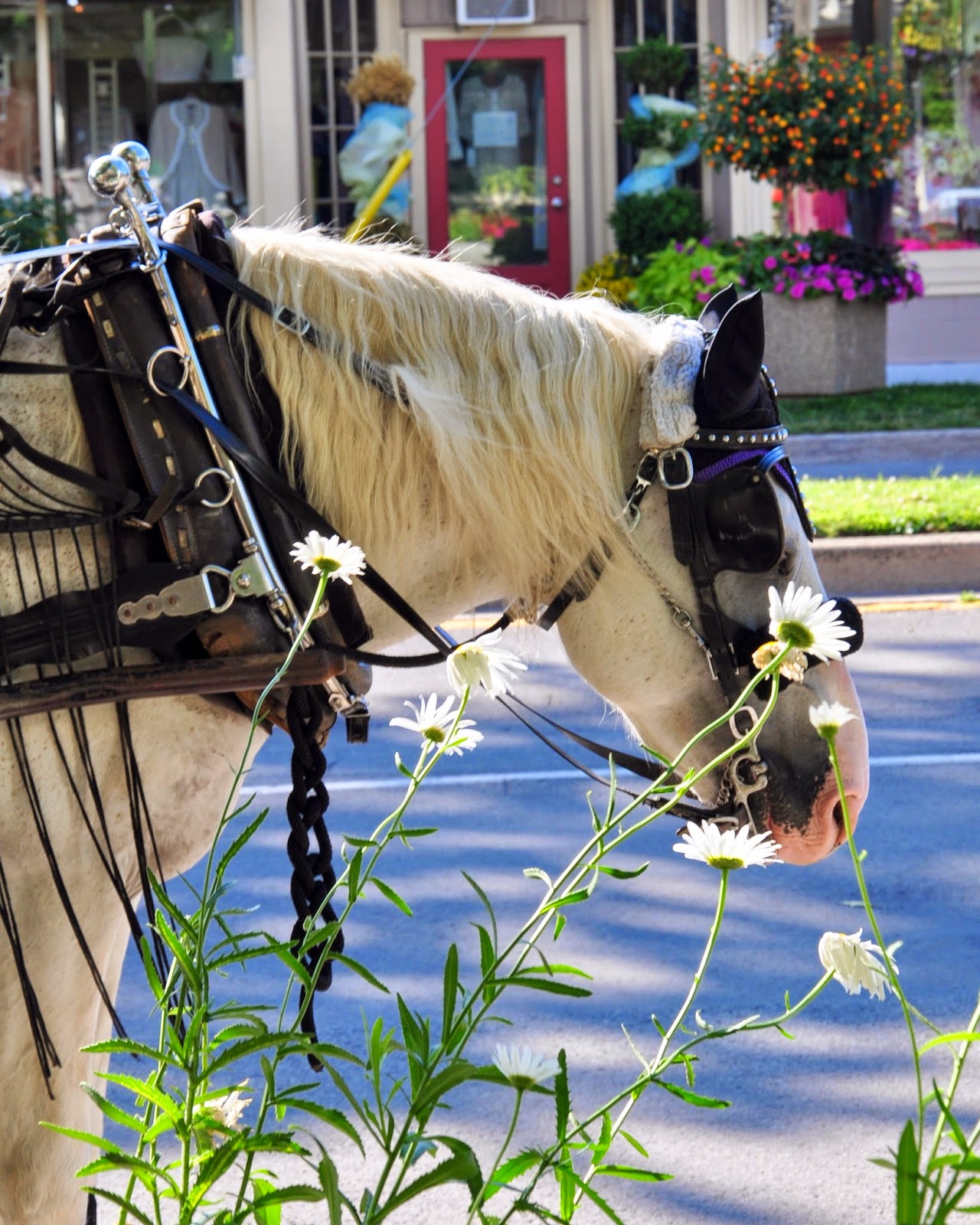 the southern part of the province of Ontario. We'd decided to rent a cottage there for the week we planned to visit, instead of the more touristy Niagara Falls. My sons were excited about spending a week in Canada -- to them Canada sounded exotic and fun. Renting a cottage provided all the comforts and space of home, perfect for a family of four, two dogs, and one friend who joined us for the week. We weren't stuck having to eat out every meal, although NoTL certainly offers a variety of restaurants to choose from if we'd wanted to. I particularly enjoyed sampling local wines when we dined out and I applaud the restaurants for offering local wines.

Although our goal had been to explore the touristy Niagara Falls attractions, just 8 miles (give or take to the south), we discovered that NoTL was a quaint and pleasant little town. Tourism is clearly the mainstay of the town, but it's not obnoxious, and in fact, because the town caters to tourists but not in a gimmicky or tacky way, there was a lot to do and see.

Some history, for what it's worth: In 1781 the British Government purchased land from the Mississaugas; a strip of land 6 miles wide along the western bank of the Niagara River for "300 suits of clothing." By 1782, 16 families had become established and had cleared 236 acres. In 1791 part of the military reserve at the mouth of the river was chosen as the future townsite and just a year later, Newark - as it was named by Governor Simcoe, became the first capital of the newly created colony of Upper Canada. In fact, the legislature met here for five sessions, until Lieutenant-Governor John Graves Simcoe moved the capital to York. By 1796, 70 new homes were built, and the town continued to prosper as the economic, administrative and judicial center for the Niagara Peninsula. The physical appearance of the town, with the exception of the powder magazine at Fort George, was virtually erased by the burning of the town by the Americans during the War of 1812 -- or, with a nod to those whose territory we were staying in, the War of American Aggression. Bad Americans!!! Read more about Fort George in Thursday's blog. 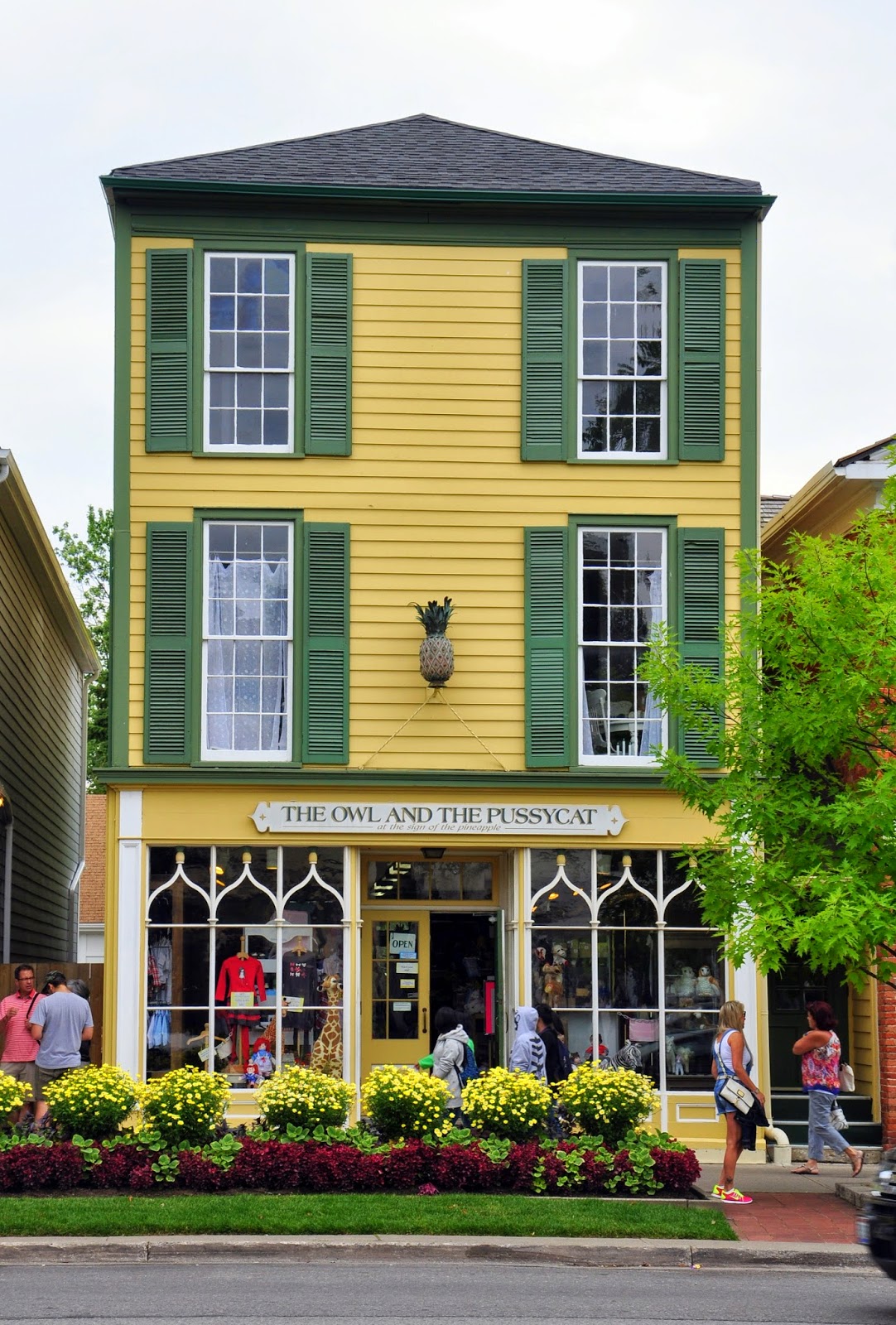 Rebuilt, Niagara became an active commercial center, with a busy shipping
and ship-building industry, as well as many shops and warehouses. The beautiful old homes lining the tree-shaded streets attest to the prosperity of its citizens.

NotL proudly leads with its reputation as the "prettiest town in Canada," with all the town flowerbeds filled with brightly colored blooming annuals, and all the homes (except one, which I'll get to later in this post) carefully and meticulously maintained -- even the homes away from the quaint main street and heart of the town. It really is very pretty!

If you want to enjoy the touristy Niagara Falls during the day, NotL is a great place to come back to in the evening, with plenty of restaurants and a couple of bars, an active theater, lots of wineries to check out (some 40 of them), and Fort George, which played a prominent part in the War of 1812. We were also enticed by the biking opportunities -- and although we'd originally planned on bringing our bikes, we ended up not, and instead rented some for the very reasonable $30/day. More about biking in the area to come in a future post. 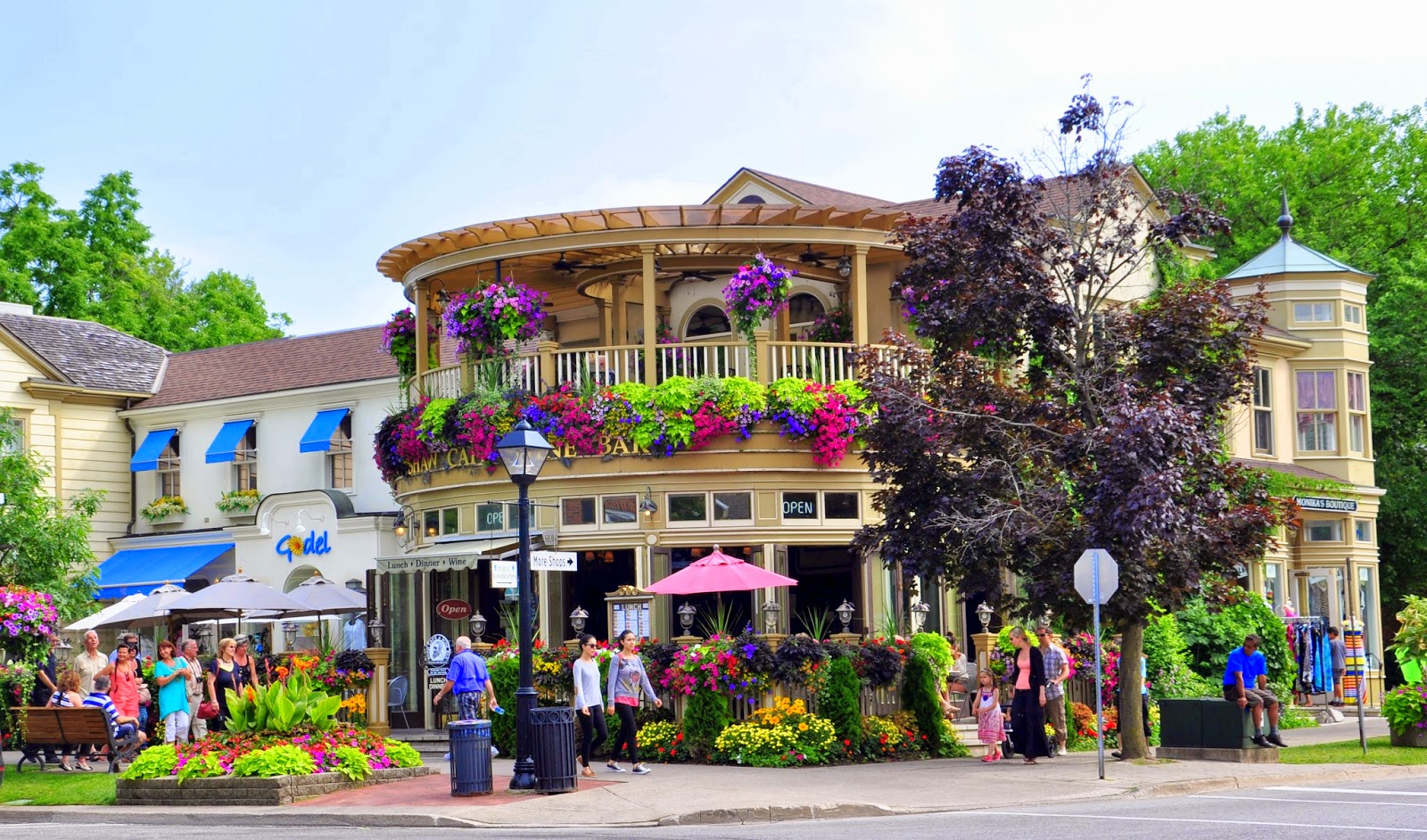 The town also offers the Shaw Festival every summer. In 1962, lawyer and playwright Brian Doherty parlayed his love for the work of Irish playwright Bernard Shaw (as he preferred to be addressed) into a summer theater festival, producing eight performances of Don Juan in Hell and Candida in the Court House auditorium. In this singular act of passion for theater and culture, the Shaw Festival was born. 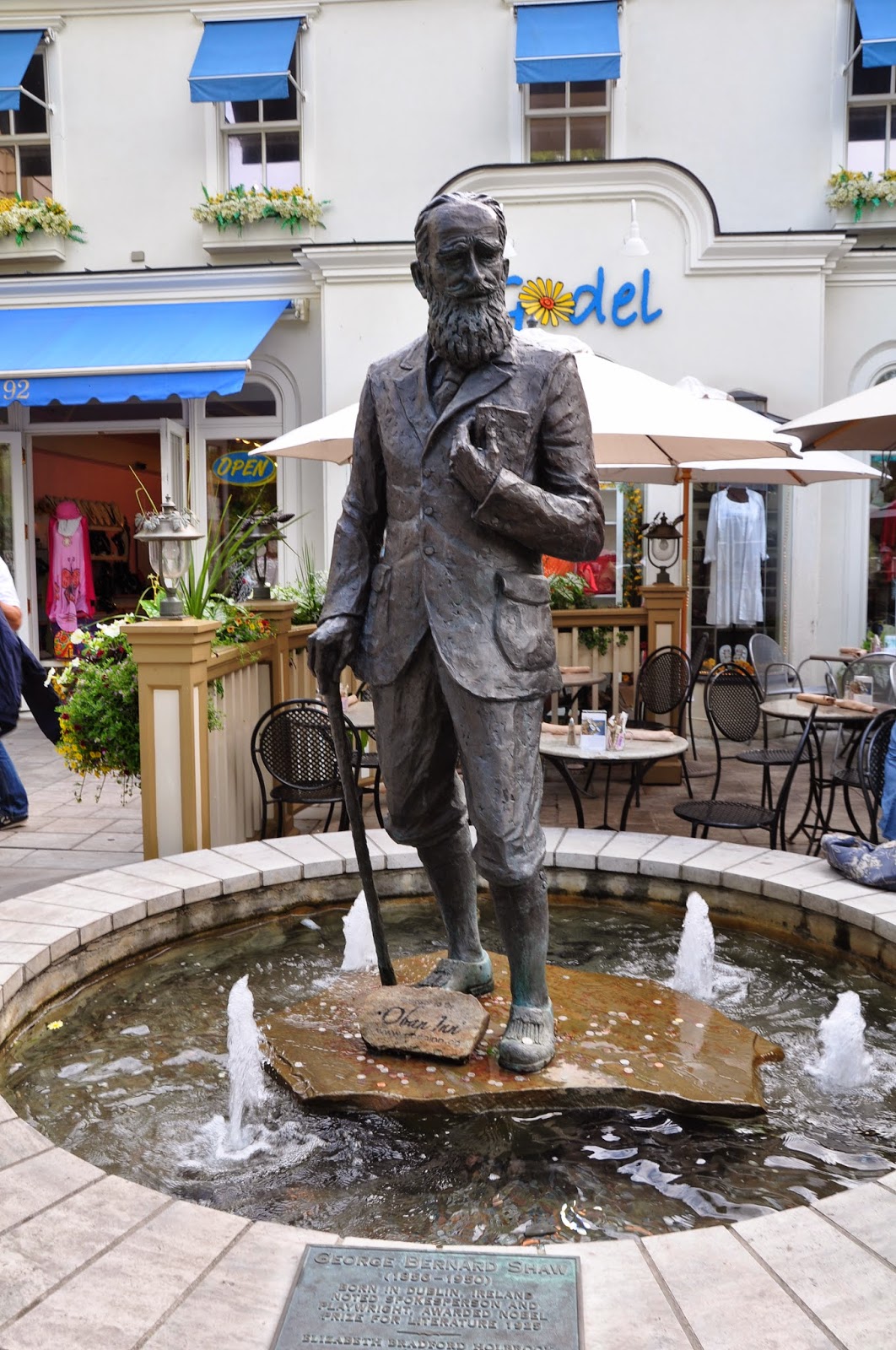 At its inception, the Shaw Festival specialized exclusively in plays by Shaw and his contemporaries and is renowned internationally for both single-handedly revitalizing and re-energizing the works of Shaw and for tackling the vast array of theater pieces in the mandate period — presenting them anew to appreciative theater audiences. Today, the Shaw Festival is a theater company inspired by the work of Shaw; producing plays from and about his era and contemporary plays that share Shaw’s provocative exploration of society and celebration of humanity.


The Shaw Festival presents plays in four distinctive theaters: the Festival Theatre – The Shaw’s flagship theatre, the historic Court House Theatre where The Shaw first began performing, the Royal George Theatre, modeled after an Edwardian opera house and the Studio Theatre. All theaters are within a short walking distance of each other. Unfortunately, I didn't get to go to any plays since I didn't learn about this until toward the end of our week's stay.

So what to do after dinner? What else is there to do in NotL if you're not yet ready to head back to your bed & breakfast or house rental? There are several pubs in town as well as a couple of wine bars. But there are also ghost tours every night of the week during the summer months, fitting for a town also billed as the most haunted town in Canada. 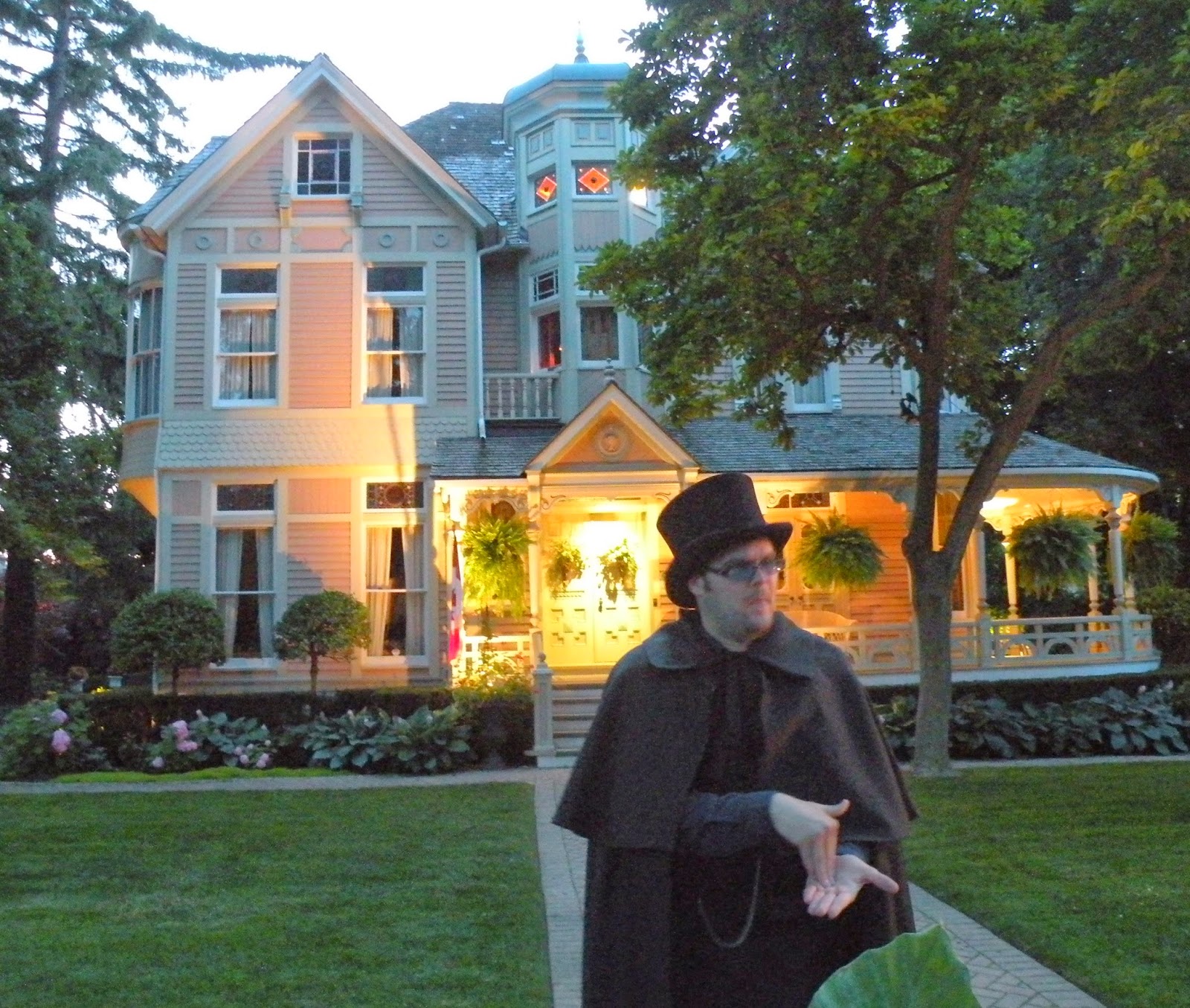 Whether you believe in ghosts, or not, consider going on a ghost tour -- these ghost walks are really just stories about local inhabitants, the human condition, and the town's secrets. NotL offers it all: bored housewives conducting Satanic seances, ancient legends, historic forts, dead British soldiers and their counterparts (evil American soldiers), and mysteriously abandoned old houses. Not surprisingly, the War of 1812 played a big part in the town's haunted history.

The Niagara-on-the-Lake Ghost Walks features the angry ghost of a British officer inside The Angel Inn, a stop on the shores of Lake Ontario for a violent and ancient legend about Fort Niagara, on the opposite side of Niagara River, and the house that makes cameras go crazy (my husband's did, mine didn't). While on the walk, we were passed several times by carriage rides. 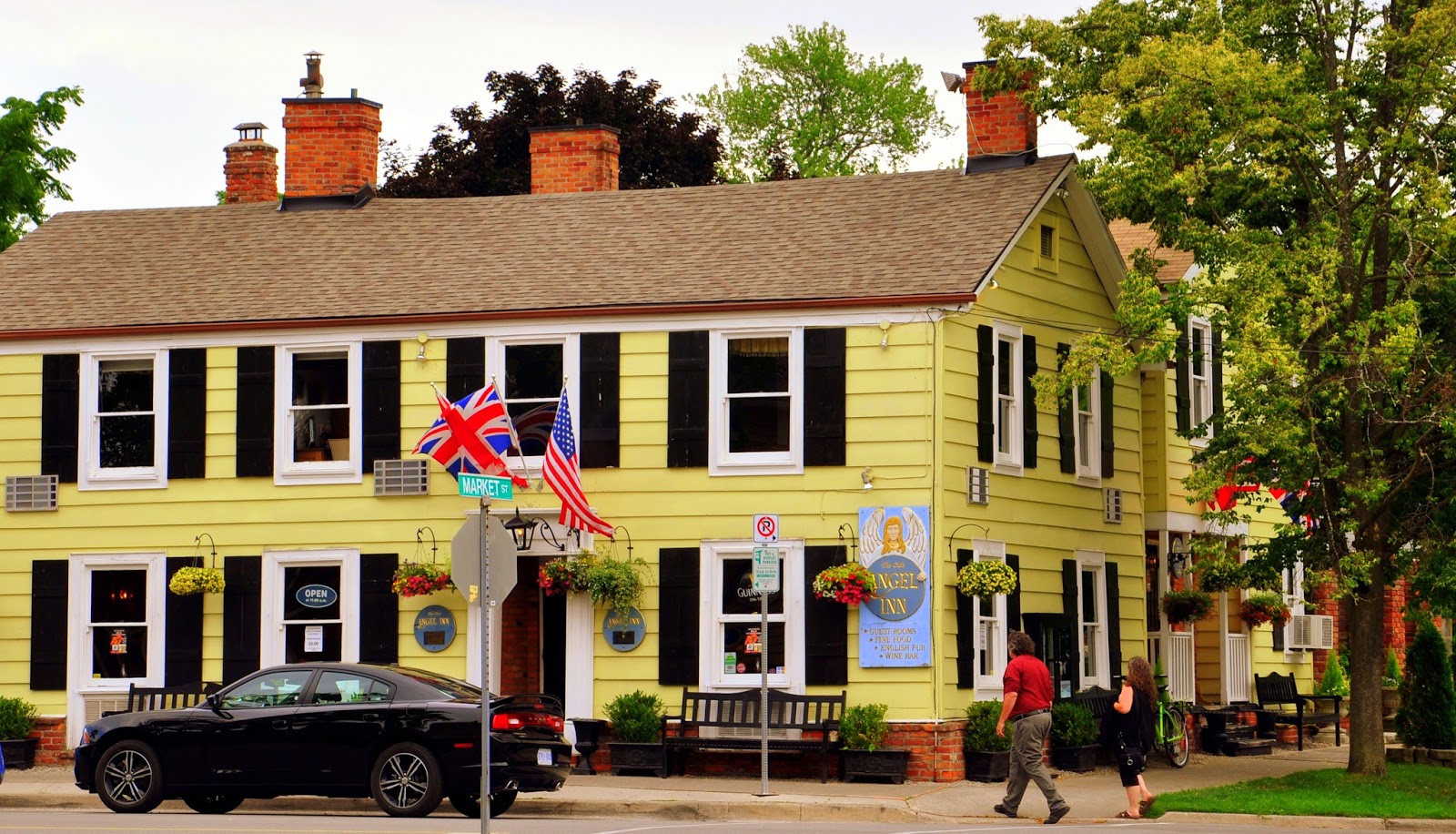 On this ghost walk, you'll also stops outside the NotL Courthouse, the Prince of Wales Hotel, the Apothecary Shop, and the Royal George Theatre, among others.

One of the last stops was in a residential neighborhood near the main street of town, where the guide told us about an historic brick house, a rare survivor of the War of 1812, that had been abandoned by its owners in the 1950s. The family simply up and moved out one day, boarded up the windows and doors when local vandals broke the windows, and the house has stood empty ever since, slowly deteriorating. It is noticeable only in that every other house in the area is meticulously kept and beautifully landscaped and this old house is not. 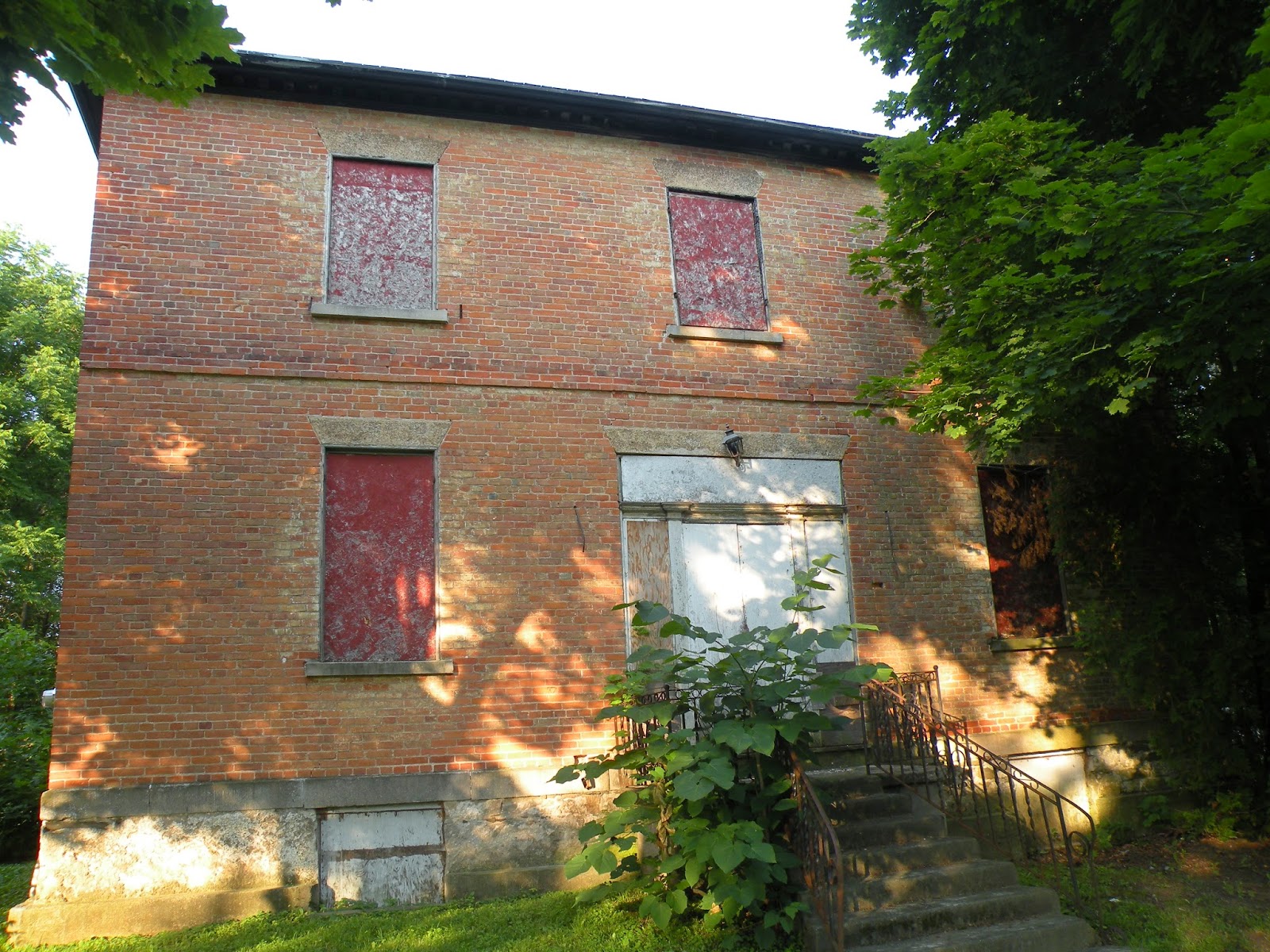 According to our ghost walk tour guide, despite a alleged offer of a million dollars for the house, still the owners refuse to sell, supposedly to prevent another innocent family from having to undergo the horrors they themselves had experienced. What happened in the house is a matter of local supposition, legend, and myth: the family refuses to discuss the house, saying only (according to the story relayed to us): "the house has a life of its own."

The house isn't actually on the ghost walk as it's too far an outlier from the rest of the tour. But the tour guide gave us directions and the next morning we sought out the house. In searching for more information about this house, I found this blog. Very interesting! I was not as brave as that blogger!! In looking at the house in the cold light of morning, you see nothing, you notice nothing, it's just an empty, old house. I walked all around it (feeling both daring and brave) and except for noting that at one point I was completely out of sight of my family waiting (smartly) in the car on the street, it wasn't even creepy. It was an old, abandoned house. Like the other blogger, a phrase from a book came to mind, except for me it was a phrase from Shirley Jackson's novela, The Haunted: "Those who walk here, walk alone."

Dogs: NotL is a very dog friendly town. Most of the shops allowed my two beagles to come in and shop with me and most provided bowls of clean water outside. Our rental cottage also welcomed well-behaved dogs.