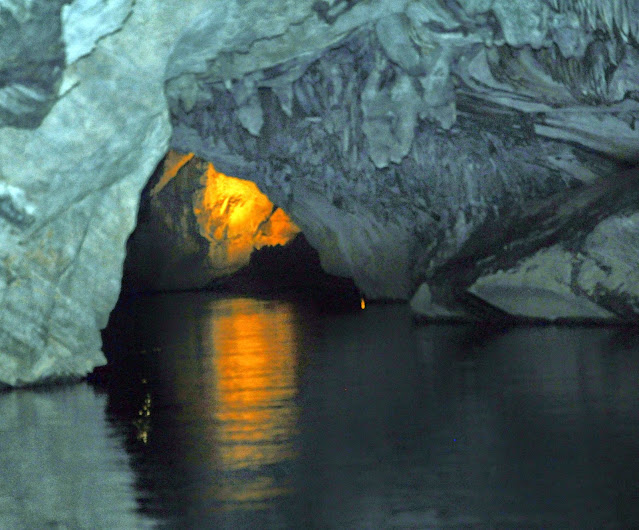 For all the natural wonders above ground, I've always been fascinated by the ones below! But I'm not a spelunker: scary dangerous dark places and heights -- and both exist in caves -- are not for me.

There are some 55 thousand caves in the United States, and most of them have not become tourist attractions or "show caves," with lighting and passageways that allow comfortable exploration for people of all ages and abilities. But a few are show caves -- Luray in Virginia, Mammoth in Kentucky come to mind. Such is Penn's Cave, an all-water cavern -- and one of the few, if not the only cave you travel through entirely on boat -- nestled in scenic Central Pennsylvania.

This is a day trip that you can take any time of the year. And whether there are leaves on the trees or soggy weather -- it just doesn't matter very much because the cave stays the same temperature and climate -- 52 degrees. Two separate guided tours are offered at Penn's Cave: a 50-minute tour of the water cavern by boat and a 90-minute tour of the wildlife park by motor vehicle. We passed on the wildlife park tour, deciding to visit the nearby Penn State campus at State College so I could introduce my sons to my alma mater.

The limestone cavern, rich in geology and history, is a natural landmark that is a stunning example of nature's flawless beauty and color. Glittering stalactites and stalagmites appear in mysteriously familiar shapes, such as the "Statue of Liberty" and  the "Garden of the Gods." It is wonderful how dripping water has sculpted magnificent flowstone, curtains, cascades, and draperies against a background of pillars and gigantic columns. 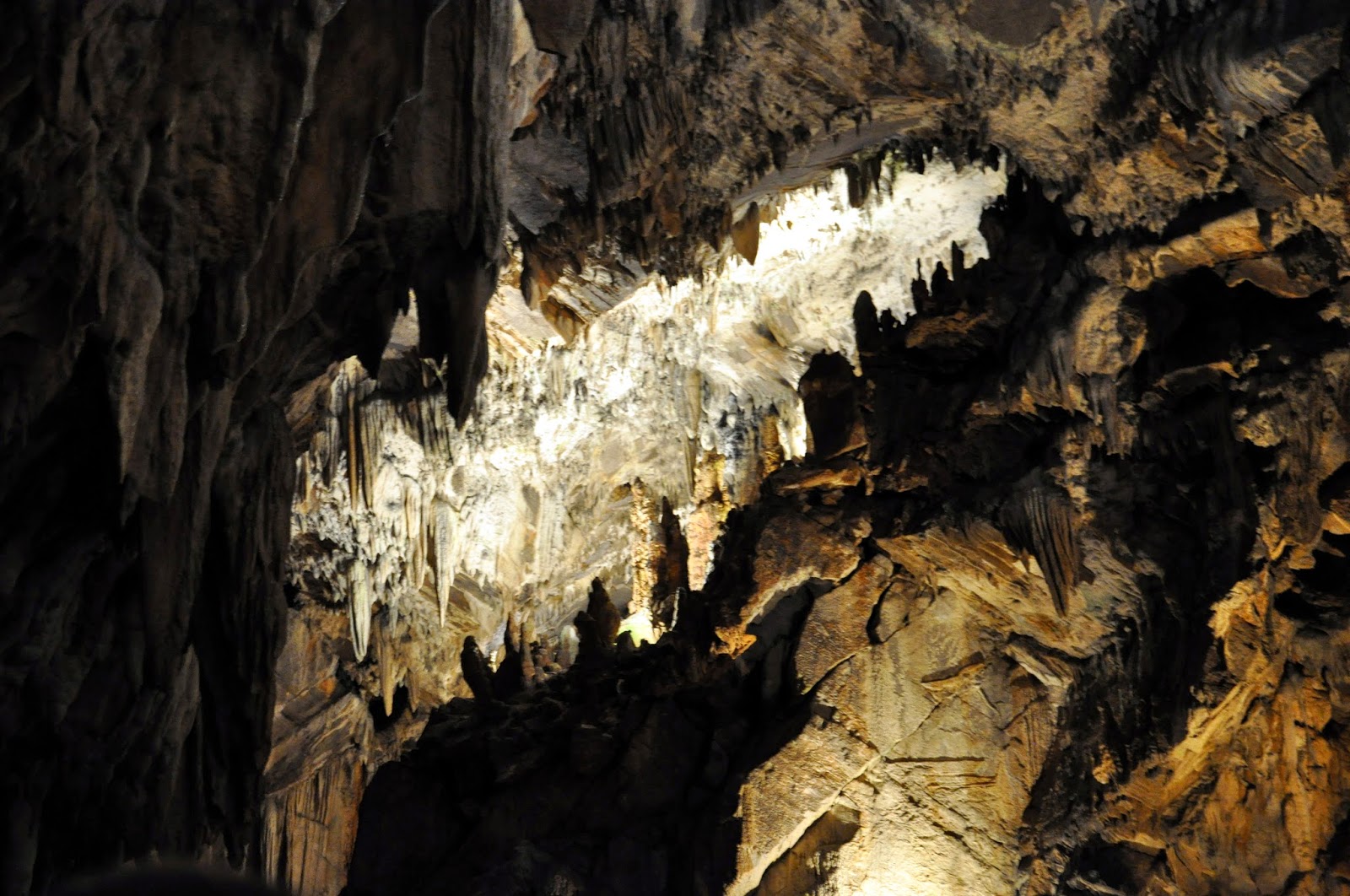 Penn’s Cave has two natural entrances. The water entrance opens from the bottom of a sinkhole several hundred feet in diameter and 75 feet deep -- that's where the tour through the cave starts. The other is at the bottom of a small sink hole in the front yard of the former Penn’s Cave Hotel, a distinctive white building on the property. 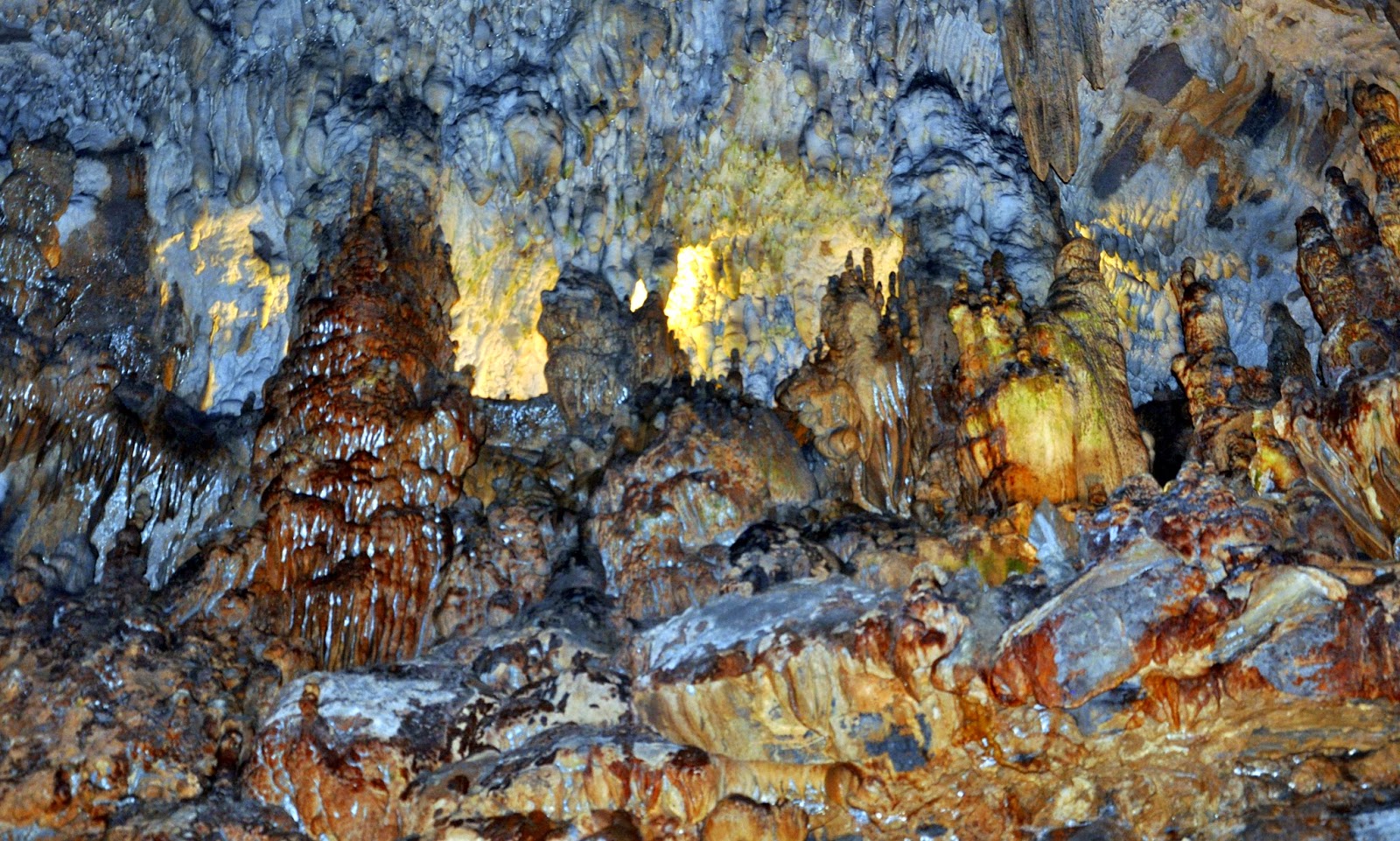 Penn’s Cave, like other limestone caverns, was formed in two cycles: first, the dissolving of the limestone rock by slightly acidic ground water deep below the surface, and second, the lowering of the water table and draining of the cavities. For caves to form in the limestone, which is essentially impermeable to groundwater unless it is fractured, the primary paths for groundwater to flow through are the joints, fractures, and gaps that have resulted from earth movements. Water continues to dissolve the limestone, and the initial path along a joint or fracture becomes enlarged to a cave passage. Caves are living things (not just home to them), and continue to evolve, albeit oh, so unfathomably slowly.

The entrance at the boat dock is a broad, smoothly-arched tunnel 20 feet wide and 10 feet high. Both walls come down to meet at the water. The tunnel opens after 150 feet into a high-arched ceiling room. The tour operator lit up the cave room in pretty colors, eliciting ooohs and ahhhhs from several of the children (and adults) with us in the boat. 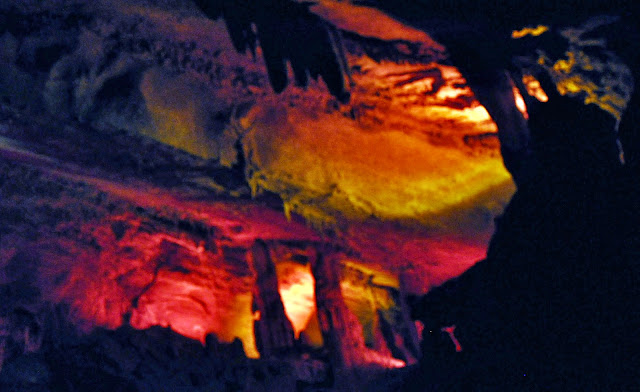 The Seneca Indians discovered this natural landmark in the Valley of Karoondinha (Penn’s Valley). The famous legend of the Indian Maiden, Nitanee, from whom the famous Penn State Nittany Lion is named, and her French trapper lover, Malachi Boyer, has been told around campfires for generations and is learned by every Penn Stater. Unable to marry because of Indian custom, they ran away and were captured, and Malachi was thrown into Penn's Cave to die. Local history also tells of Indians and early explorers using the cave's dry rooms for shelter. In 1885, Penn's Cave was opened as a commercial show cavern, and the Penn's Cave Hotel was built. In 1976, Penn's Cave and the Penn's Cave House were placed on the National Register of Historic Places. 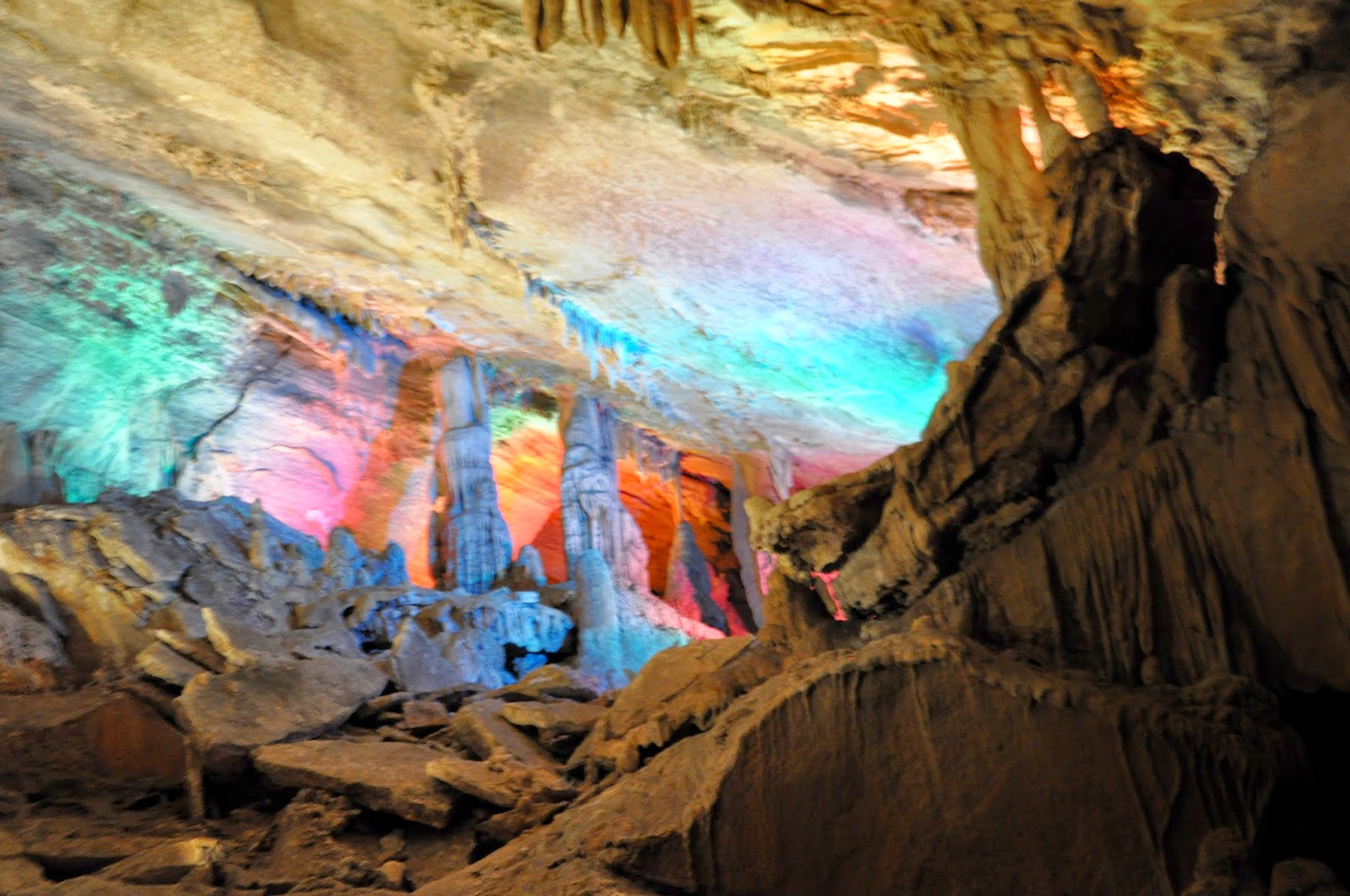 Know before you go: Even on a hot day, a sweater or jacket is recommended because the temperature is 52 degrees inside the caverns. Penn's Cave is located close to State College  -- home to the 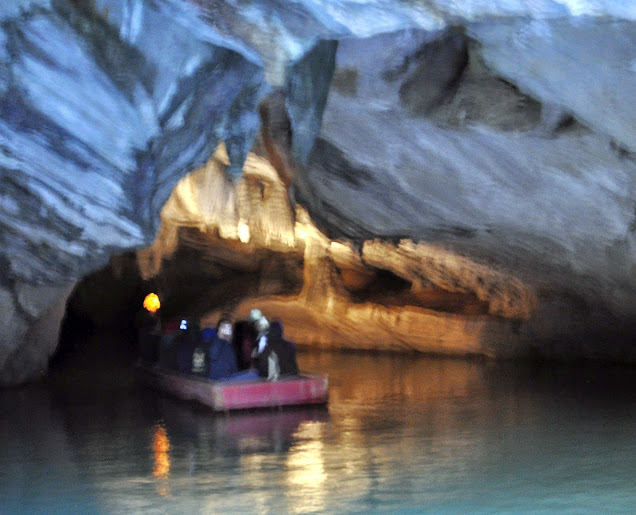 Penn State University Park campus and attracts thousands of visitors each year. Plan a few hours to check out the many craft and antique shops in towns like Boalsburg, Centre Hall, and Lemont, many featuring works by local artists and craftspeople. If you take a drive on Route 192 through Madisonburg and Rebersburg, you can see Amish farms unchanged for nearly two centuries.

The Legend of Penn's Cave

In the early eighteenth century, long before settlements reached beyond Sunbury, PA, a young Frenchman from Lancaster County, Malachi Boyer, set out to explore the wilderness. He roamed into the forests peopled by Native Americans, with whom he was friendly. One beautiful April, Malachi camped at Mammoth Springs, near the camp of Chief O-Ko-Cho, on the shores of Spring Creek near Bellefonte. He made friends with the old chief and sent him small gifts as tokens of friendship.
O-Ko-Cho had seven sons and one beautiful daughter, Nita-nee, whom the sons guarded carefully all the time. One day Malachi caught sight of Nita-nee washing a deer skin in the stream and immediately fell in love with her. Since the Native Americans would not permit their marriage, they decided to run away, and late one night, they departed for the eastern settlements. They were later captured by the seven brothers and were returned to Chief O-Ko-Cho.
O-Ko-Cho commanded his sons to take Malachi into a yawning cavern filled with water and thrust him in. Every day for a week he swam back and forth searching in vain for an entrance other than the large one guarded by the merciless brothers. Then, exhausted from his efforts and vowing that the brothers should not see him die, he crawled into one of the furthermost recesses of the cavern and breathed his last. The brothers did not touch the body except to weight it with stones and drop it in the deepest water in the cavern. After these many years, those who have heard the legend declare that on still summer nights an unaccountable echo rings through the cavern, which sounds like “Nita-nee - Nita-nee.”
--As told by Isaac Steele, an elderly Seneca Indian, to Henry W. Shoemaker, in 1892