Our goal, that cold April Saturday, was to park at Fort Frederick State Park, ride up to Hancock on the C&O Canal towpath, grab lunch, ride back on the Western Maryland Rail Trail (WMRT), and then tour Fort Frederick. Check out last week's post for the narrative about Fort Frederick.

I'd read about the WMRT in my favorite go-to book for places to bike, aptly titled Rail-Trails Mid-Atlantic (2007, Rails to Trails Conservancy). The description of the half of the trail east of Hancock sounded intriguing: ruins, forgotten cemeteries, large rock outcroppings. I completely overlooked the suggestion to look for deer and wild turkey that are not phased by the "loud traffic nearby." 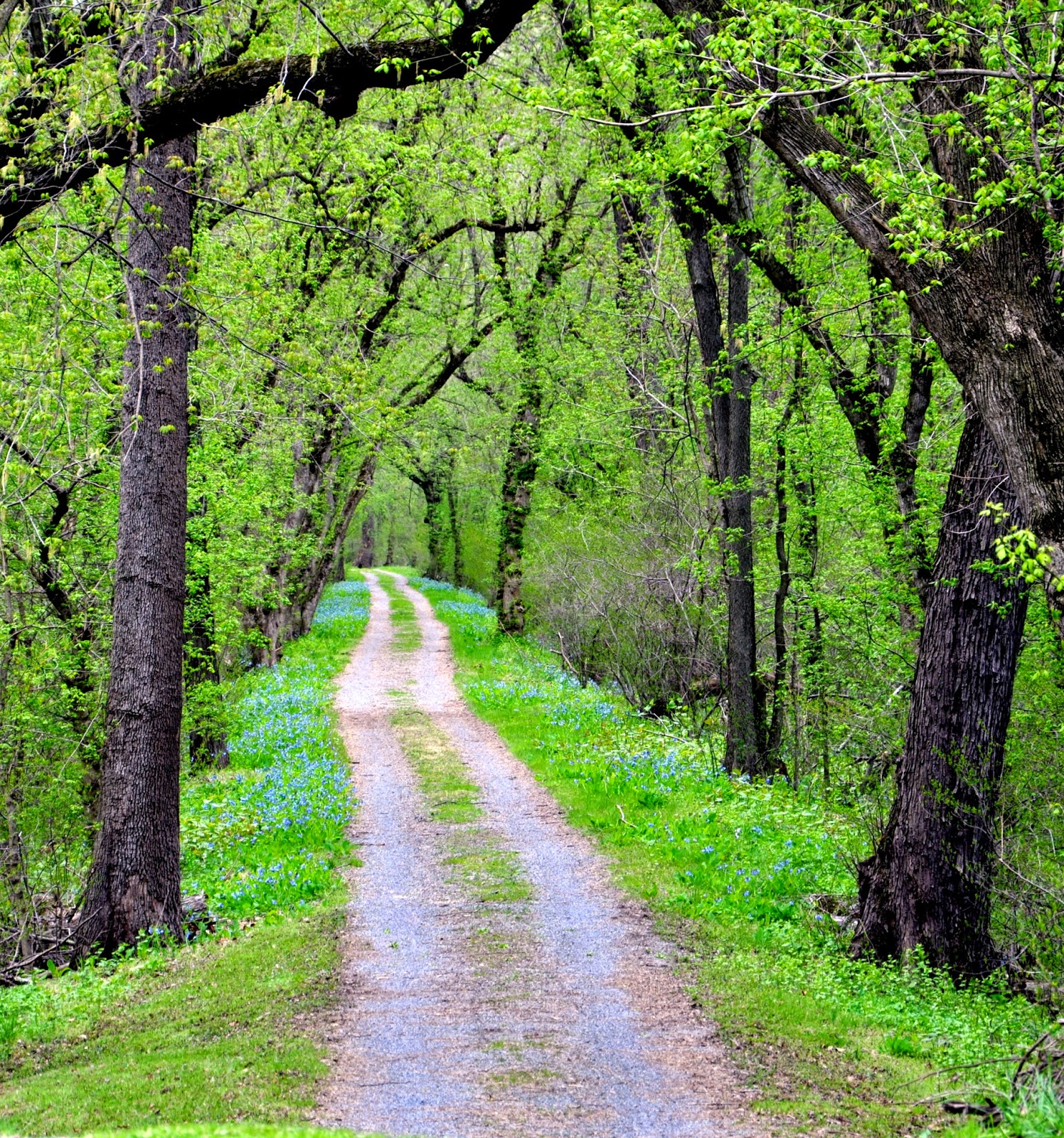 The "loud traffic nearby" would be I-70, near Hancock. For eight miles or so east of Hancock, the WMRT runs alongside of the interstate, sometimes within a few feet of it, always within hearing, and mostly within sight of it. That mars what otherwise could be a delightful trail.

We started off at Fort Frederick State Park, where there's ample parking (unless there's a planned event). Although there's a parking lot specifically for the WMRT directly off of MD Route 56, I wanted to both tour Fort Frederick and ride the first leg on the C&O Canal tow path, which is easily accessible from Fort Frederick. The rail-trails guide suggested "varying the scenery" by traveling in one direction on the WMRT and the other on the tow path. That seemed like good advice, although it implied that the WMRT connects directly to the state park (it doesn't). 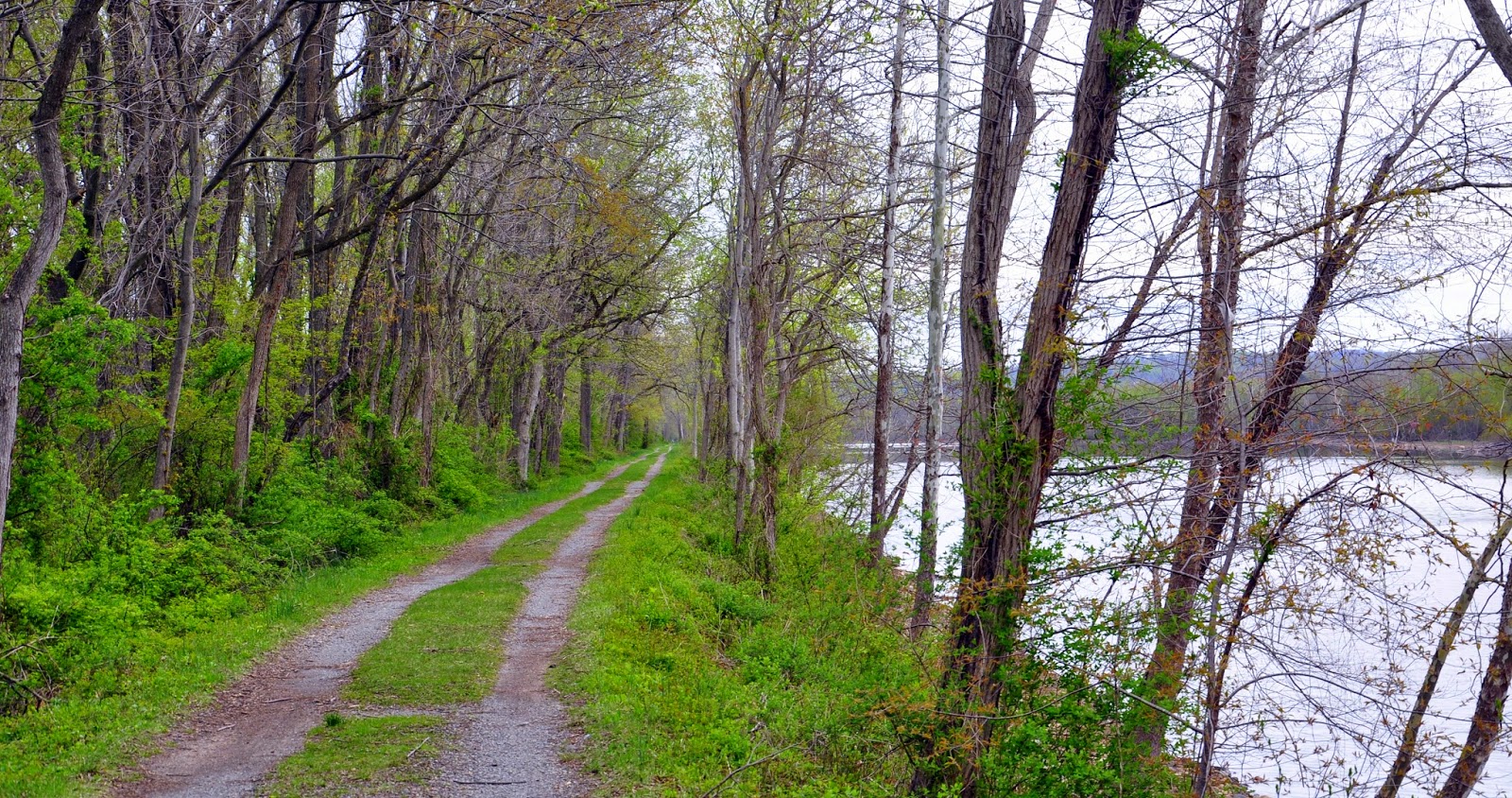 From Fort Frederick, we joined the tow path at mile 112.5, at Big Pool, a large pond through which the canal traveled. This is a man-made lake, created by the canal engineers, taking advantage of a natural ridge to entrap the water. We saw signs of beaver, as well as an aggressive Canada goose couple who guarded the tow path as their own personal property. Soon after leaving Big Pool, we passed below a railroad truss bridge. I kept hoping we'd hear the welcome thunder of a train, but our timing was off. This section of the canal travels fairly far from the Potomac, through farm fields. The birds were the loudest noise in this section, and the tow path itself was graveled in two tire tracks. It was very pleasant riding! 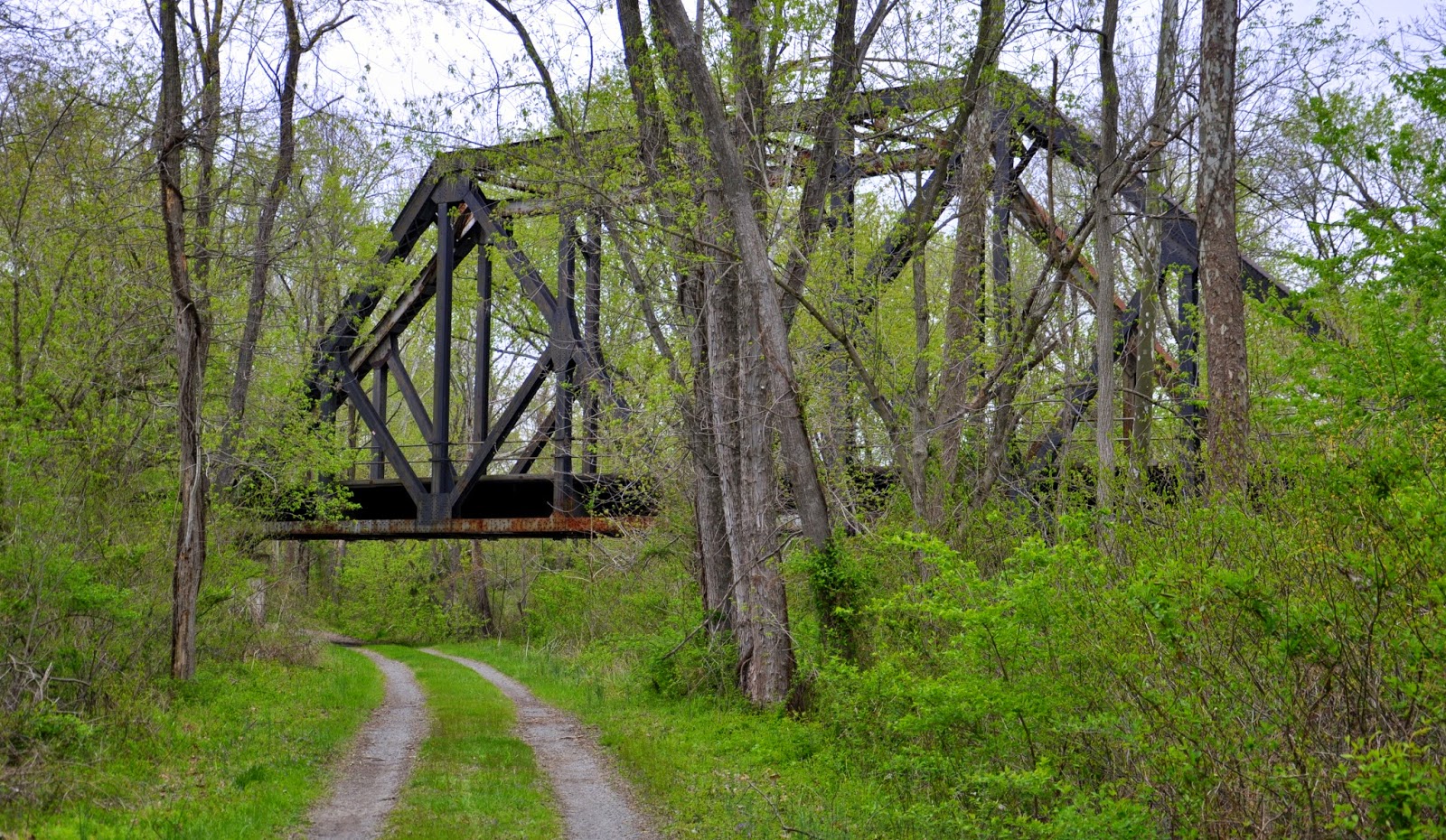 That changed later on -- maybe four miles after leaving Fort Frederick, just after Licking Creek Aquaduct; at this point you can see the bridge carrying the WMRT from the towpath. Then, traffic noise (from I-70) was noticable (although not nearly as loud as on the WMRT). By and large, from this point on, the WMRT and the tow path parallel each other, maybe a hundred yards or so apart.


Although the canal itself is mostly dry, at points it is filled with shallow pools; because of fallen tree limbs, the water is in some places stagnant. There are also what looked like drains -- I mistakenly believed these were modern-day constructions to keep the water in the canal to a minimum (and thus didn't photograph them). It turns out these are waste weirs, original to the canal, built along the canal over culverts to drain excess water out to the river. 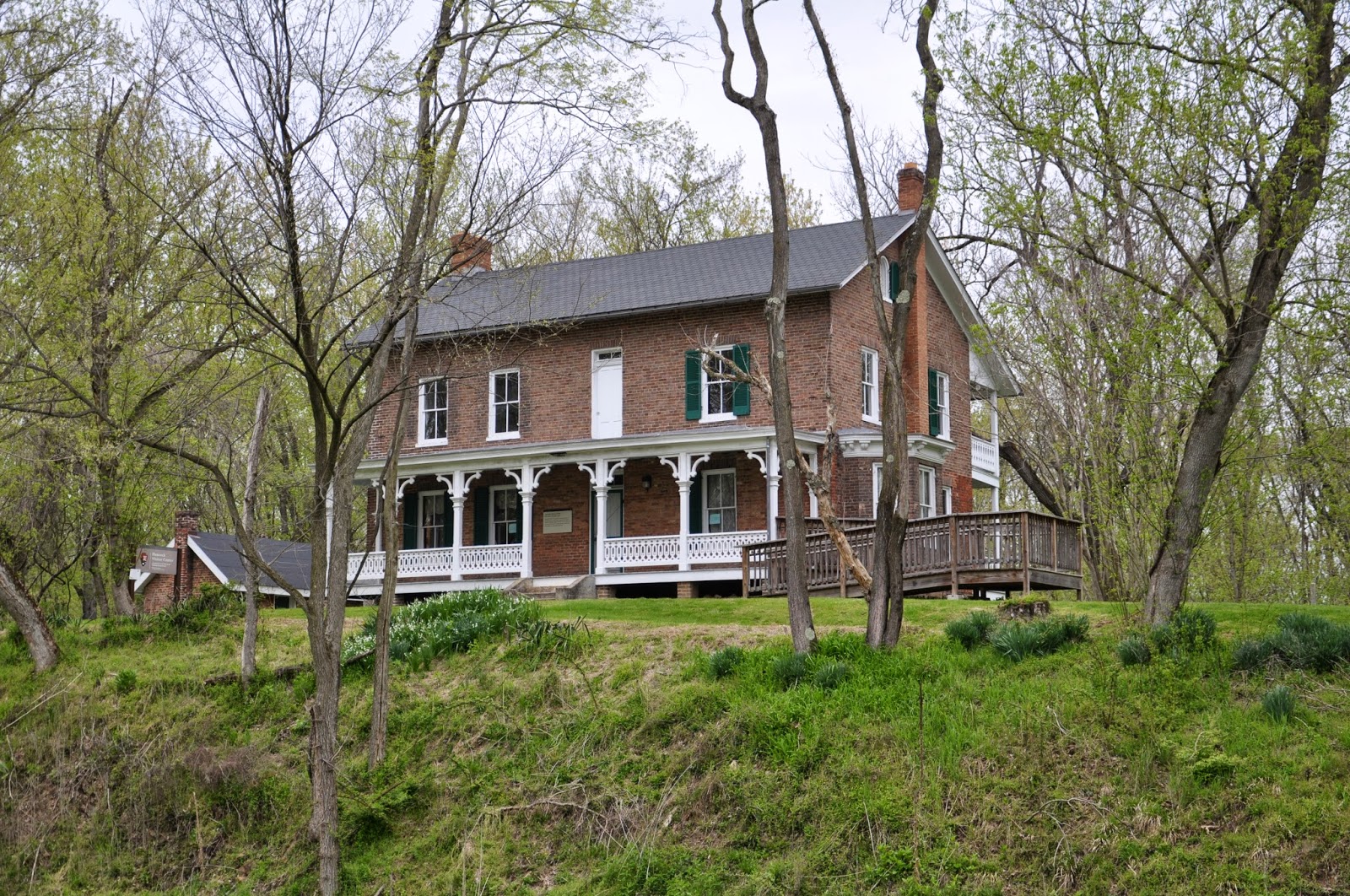 We left the canal at the Hancock Visitors Center, housed in the historic Bowles House, an 1780s-era farmhouse. The residents of this home catered to the canalers, selling them goods and food. A lock was constructed right in front of the home; it's likely they served as lock keepers too. There's a parking lot nearby and direct access from the main road to both the canal towpath and the WMRT. It was lunchtime for us, so we decided to take the WMRT a half mile into Hancock to have lunch at the venerable Park-in-Dine, an almost 70-year-old diner/restaurant. 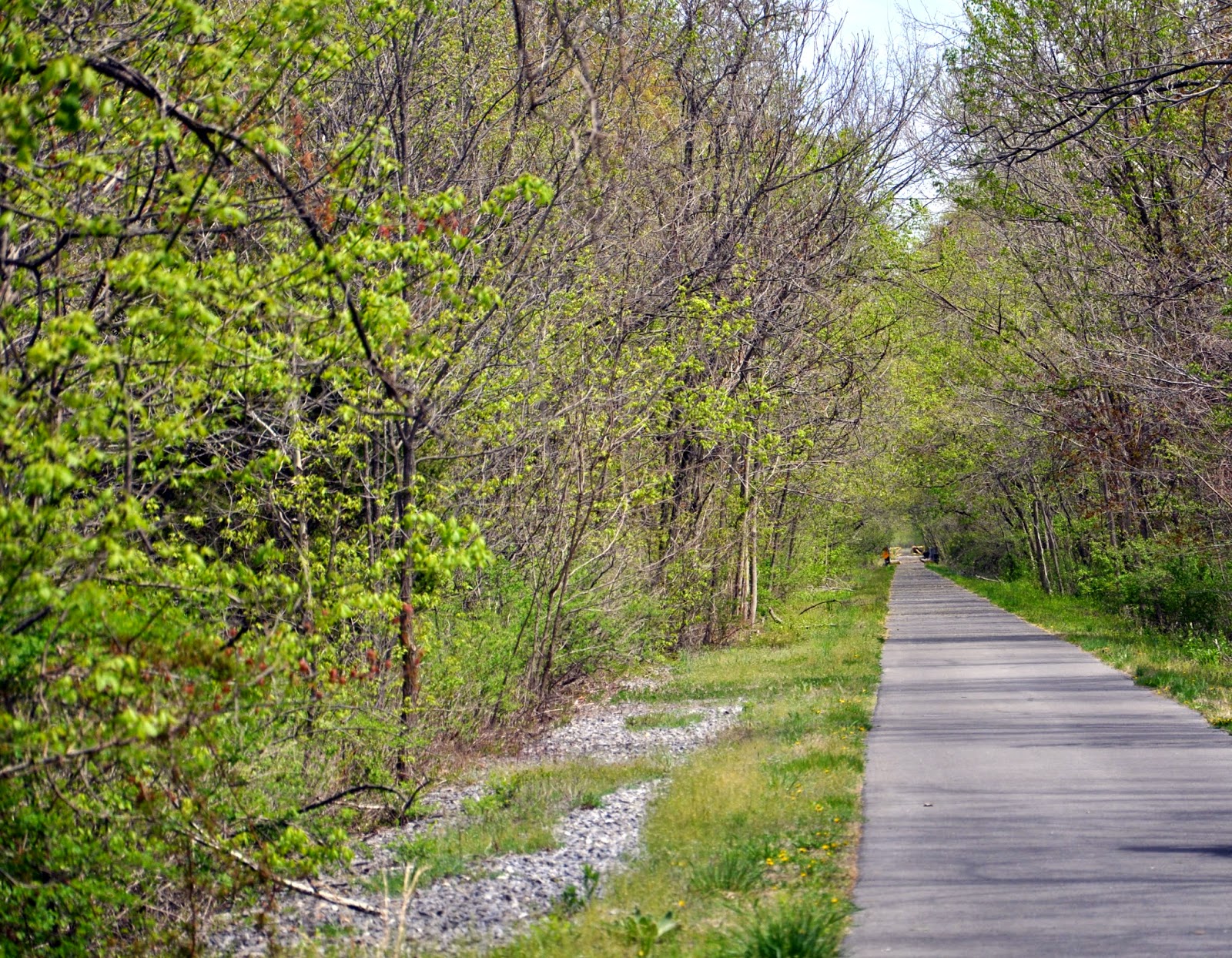 After lunch, we took the WMRT back toward Fort Frederick. The WMRT provides an additional buffer to the fragile canal, towpath, and Potomac River. The National Road, the Chesapeake and Ohio Canal, and the Baltimore and Ohio and Western Maryland Railroads made use of the Potomac River's route through the mountains. Hancock, strategically located at the foot of the Appalachians, has offered hospitality to travelers since colonists first started moving west.

As I mentioned earlier in this post, this stretch of the WMRT headed toward Fort Frederick was notable for the incessant and unpleasant noise of the highway, although it was pretty enough in places. We passed by the old cemetery mentioned in the guidebook. It wasn't very exciting, although I suppose one generally should be grateful for that. 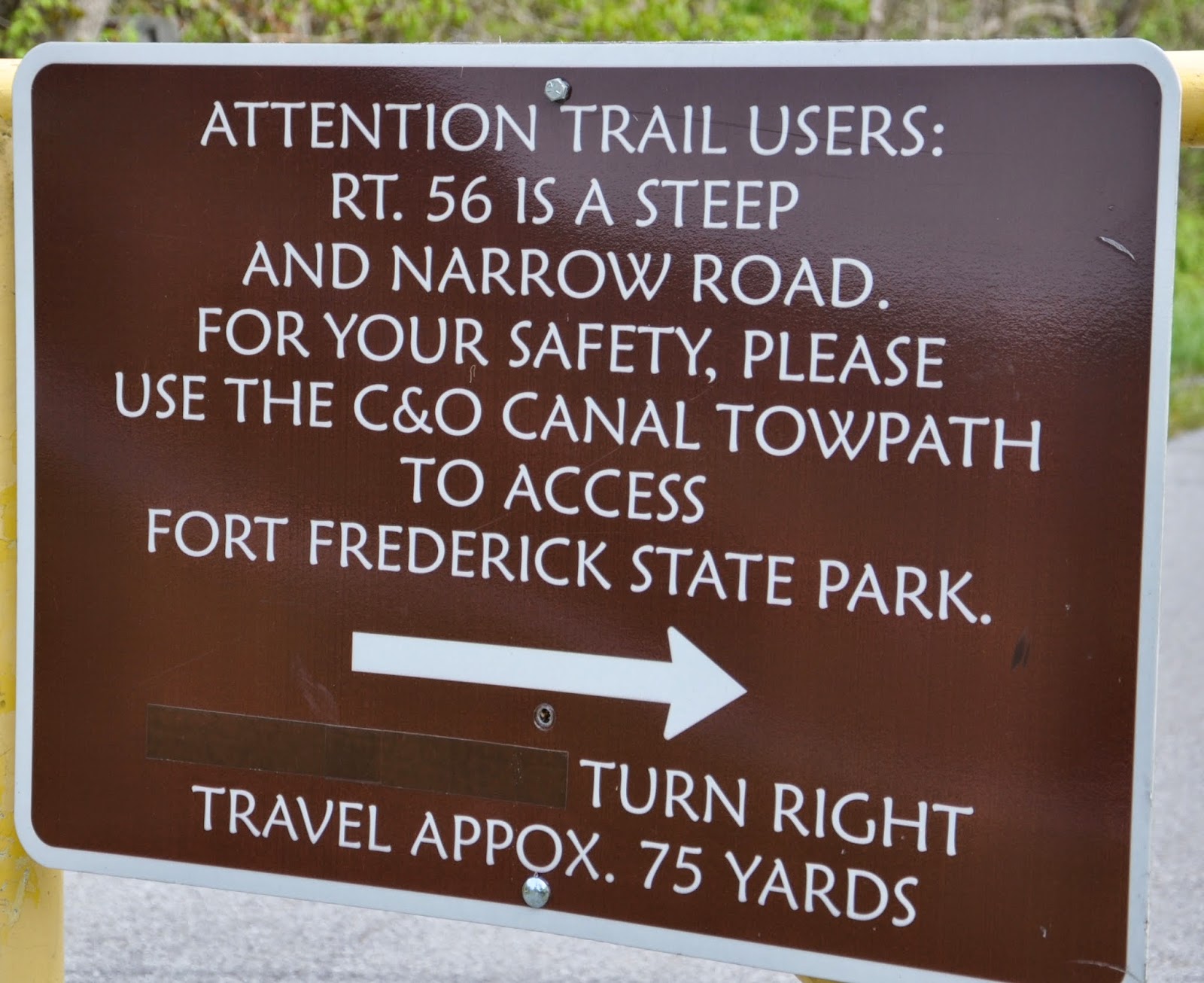 Overall, though, I'd recommend skipping this portion of the WMRT. Photographs I've found online make it look as if the section of the WMRT west of Hancock is more lovely and more interesting: my husband I have decided to give this a try later this summer. Of course, I'll blog about it. Stay tuned!

Although guides mention frequently that the WMRT connects to Fort Frederick, at Ernestville Road we encountered a sign warning us otherwise. We decided to play it safe and heeded the advice and connected back to the towpath for the final couple of miles back to Fort Frederick, where we'd parked.

Have you daytripped somewhere interesting? I'd love to hear what you're doing! Email [email protected] if you're interested in being a guest-blogger!
Posted by Jody Arneson at 5:39 PM