Fellow blogger J. Hammer graciously agreed to guest blog for the Mid-Atlantic Day Trips Blog about hiking along Maryland Heights, near Harpers Ferry. This is part 1 of his two-part series.

Worth a Voyage across the Atlantic 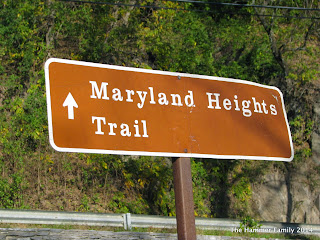 Over 1400 feet high, Maryland Heights offers stunning views of the town of Harpers Ferry, WV, and the Potomac and Shenandoah Rivers. You might learn a little bit of Civil War history along the way.

Maryland Heights is one of the hikes I've been wanting to do from the first time I visited Harpers Ferry. I finally got some spare time to hike it on a chilly, windy, but sunny November afternoon. I parked at the visitor center and took the bus down to the main town with my pack and hiking stick.

Full disclosure: I only hiked the Overlook trail and didn't get to the Stone Fort trail, since I got started a little later than I wanted. 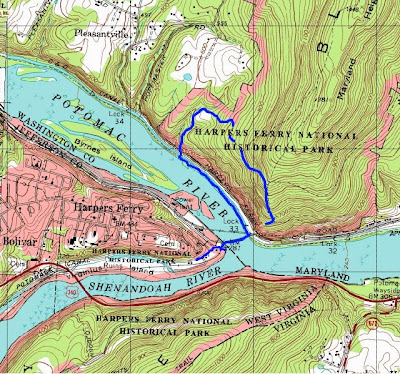 If you can't tell by the photos below, the trail is somewhat steep, in some places more than others. Take your time and bring plenty of water (there are no fountains or water access on the trail at all). Also, make sure you take care of restroom business in town before you cross over the river.

To reach the trailhead, you have to cross the railroad bridge across the Potomac (part of the Appalachian Trail) and then head up the C&O Canal Towpath. The footbridge over the C&O canal leads (once you cross the road beyond) to the trailhead. 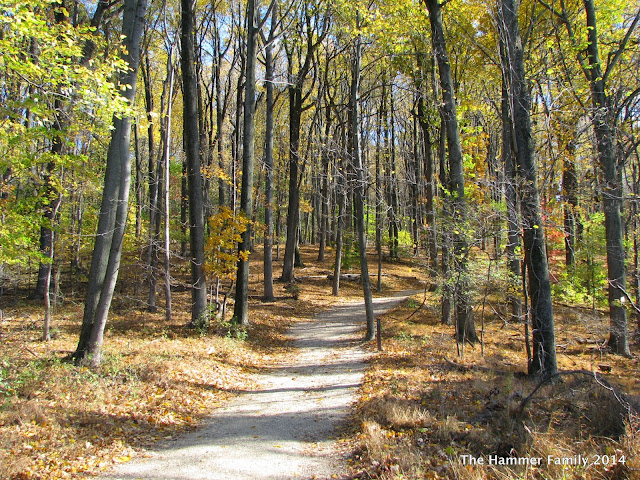 On the way up the combined trail to the overlook trail, you'll encounter some trail markers and points of interest. The first one, 300 feet above the Potomac River, is the Naval Battery, the first Union fortification on Maryland Heights. Hastily built in May 1862, its detachment of 309 sailors and marines were there to protect Harpers Ferry, just opposite the Potomac River, from Confederate attack during General Stonewall Jackson's famous Valley Campaign in the spring of 1862. Although the fortification initially was successful, Jackson returned in September that year, and this time he prevailed, and the battery was abandoned by Union troops. Soon after that, however, Union troops returned again to Maryland Heights, but this time they built fortifications at better locations on the crest and slopes of Maryland Heights. Losing its defensive importance, the Naval Battery became instead an ordnance depot.

THE TRAIL NOT TAKEN

Once past the Naval battery, not far up the combined trail, the Stone Fort trail splits off. The Stone Fort trail goes up to the summit of Maryland Heights, and is a little more than 3-mile circuit hike, which will bring you back around near the Overlook trail.
As I mentioned before, I didn't hike the Stone Fort trail, but I understand it's fairly strenuous but rewarding. Hopefully soon, I'll head back and hike this one.

Thomas Jefferson said of the view that it was "worth a voyage across the Atlantic." Although he was actually referring to the view from Jefferson Rock, I believe he would have said the same about the view from the Maryland Heights Overlook. The Shenandoah River. The bridge over the Shenandoah is part of the Appalachian Trail coming out of Virginia.
The AT then turns up the hill and goes past the church before crossing the Potomac into Maryland.

OTHER PICTURES FROM MY HIKE 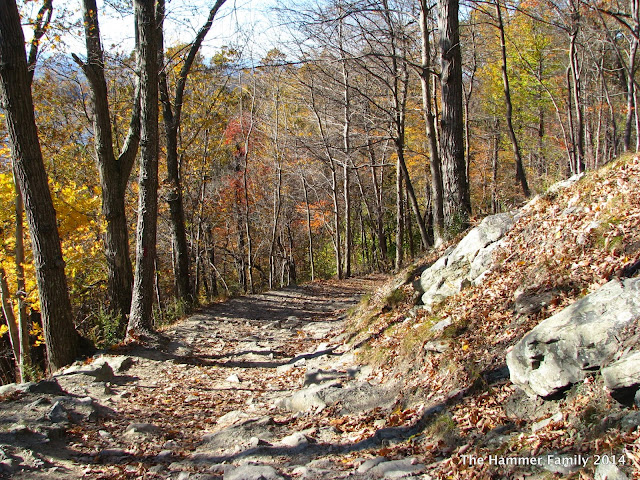 Coming down the mountain. 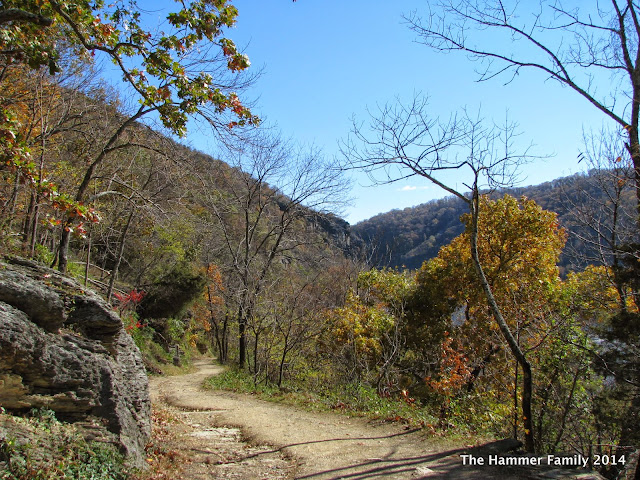 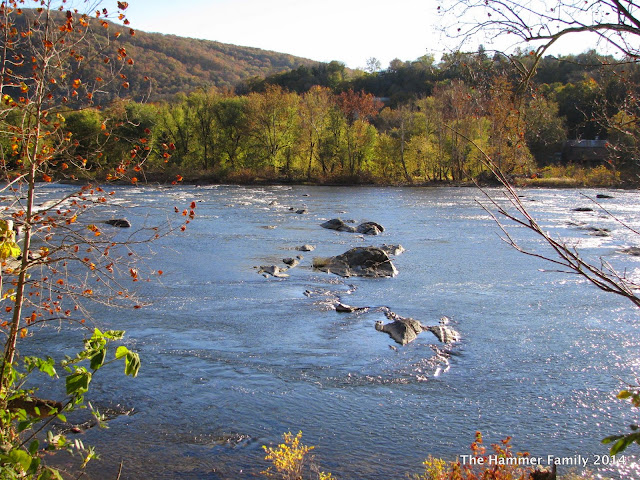 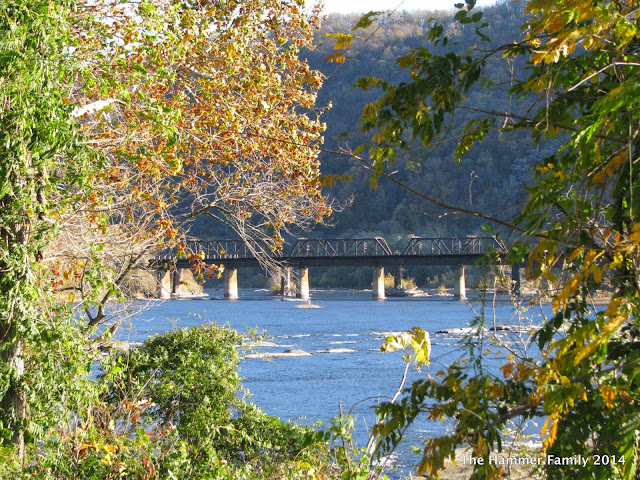 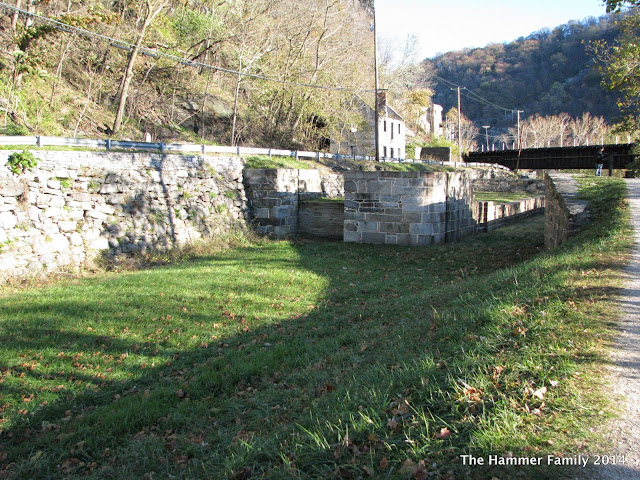 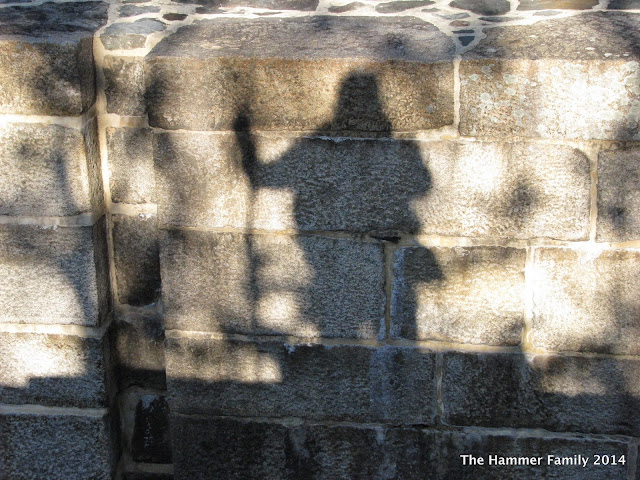 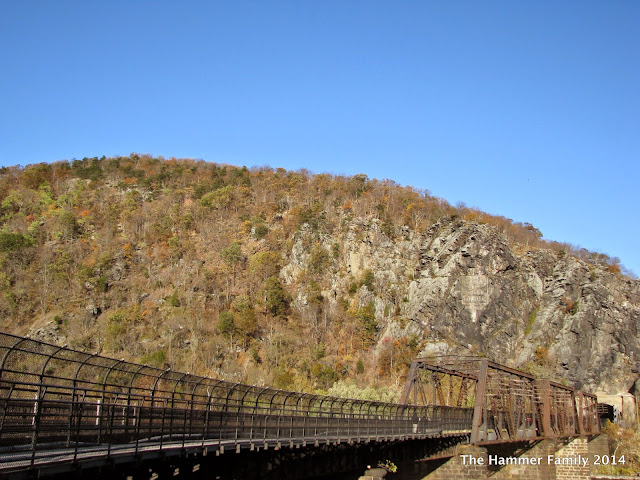 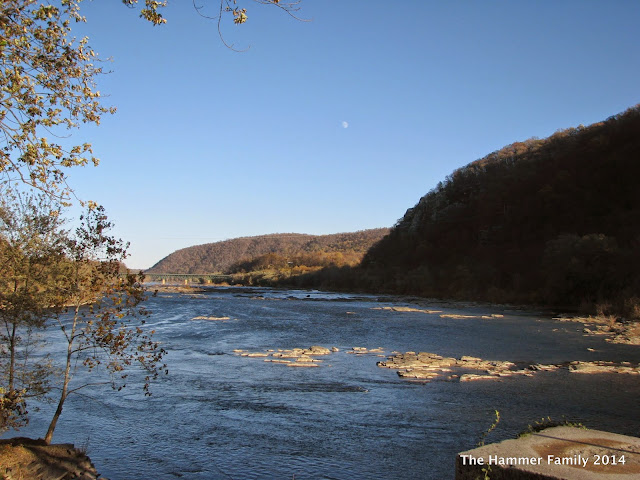 As it was a windy and chilly day, I bundled up with a long sleeve base layer under a t-shirt, and a warm zip up hoodie. I also wore a scarf and hat which I occasionally removed. I brought along an extra fleece pullover and windbreaker jacket as well, but I didn't really need them. I worked up a pretty good sweat hiking up the hill, and in colder weather, I might have been concerned by this. Thankfully, a little time spent relaxing in the sun on the overlook dried me out a bit. This trail is definitely one of the more strenuous trails I've done so far, so if you attempt it, know your limits and take your time. Most of all, enjoy. 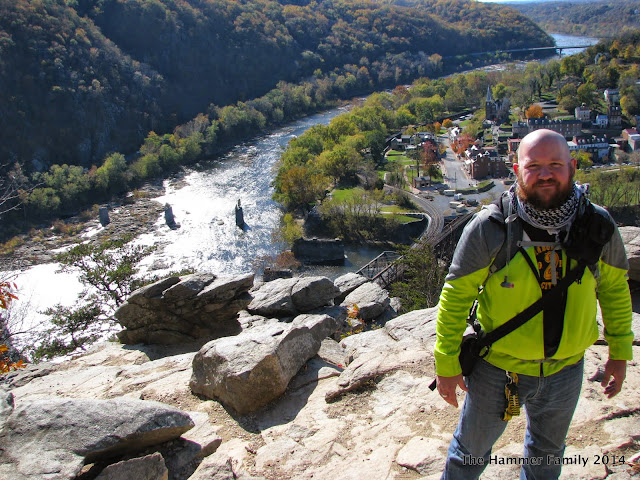 Tip #1: I strongly recommend a hiking stick or trekking poles to help you up the side of the mountain. There's also plenty of loose gravel, rocks, and tree roots on the trail, so mind your steps.


Tip #2: Parking: There are a very small number of spots near the trailhead, so unless you get there early, you probably won't get a spot. I recommend parking at the visitor center, taking the bus into town, and walking the rest of the way.

Tip #3: On a warm day, the overlook would be a nice place for a picnic, so if you're willing and able to haul some food up the mountain, go for it, but please make sure you pack out your trash, as there are no trashcans anywhere on the trails.

Dogs: You can bring dogs along, but please make sure you clean up after them as well. Leave no trace except footprints.

Have you daytripped somewhere interesting? I'd love to hear what you're doing! Email [email protected] if you're interested in being a guest-blogger!
Posted by Jody Arneson at 5:29 PM