Lighthouses stand as solitary sentinels signaling unseen danger -- the peaks and valleys that map the geography under water. Mysterious, silent, and now lonely -- almost all lighthouses are automated, and almost all are slowly deteriorating back into the waters they have protected our sailors and sea-going adventurers from all these years.

Yeah, I'm fascinated by the lighthouses and their stories, of their lightkeepers and their families, their histories and their ghosts.

The coastal lighthouses of New Jersey are famous for a number of reasons, including their roles in the success of major ports like Philadelphia and their strategic value during times of war. All the lighthouses we saw during this tour could only be seen by boat.

The tour brought us to see six light houses:

The first we encountered was the Miah Maull Shoal Lighthouse. I particularly liked the story behind this lighthouse -- named for a man who lost his life on the very shoal the lighthouse now marks. It's a sad story, though. Nehemiah Maull, born in 1737, was employed as a Delaware River pilot, an occupation that he shared with his father John, who had immigrated to Lewes, DE from England in 1725. In 1780, Nehemiah set out on a voyage to England to stake his claim to a portion of the family fortune. As a river pilot, Nehemiah was surely acquainted with the hazards of navigating Delaware Bay, but ironically the captain of the vessel on which Nehemiah was traveling was not, as the ship wrecked on an unnamed shoal in the bay. Nehemiah perished in the accident, but in honor of his years of service on the Delaware Bay, his name was given to the shoal, so that he would live on in the memory of those navigating the bay. Nehemiah must have been considered too long, as the name given the shoal was just Miah Maull.

Miah Maull Lighthouse was one of the later lighthouses built -- it was begun in 1908 but only completed in 1916, but served for decades. The Coast Guard removed the last crew from the station in 1973, after automating the lighthouse.

Between lighthouses there is much to see along the way. Several times we spotted dolphins, including once fully breaching the surface of the water before diving down again, only to emerge again playing in the wake of the boat. We also enjoying the superliners hauling all sorts of goods through the bay, as well as a variety of adorable tug boats!

Twenty-five miles inside the bay, a submerged, three-mile-long ridge known as Cross Ledge, lies near the main shipping channel. With a covering in some places of as little as three feet of water, the ledge poses a serious danger to vessels that might stray slightly off course. First marked by a lightship (called the Upper Middle Lightship) in 1823, winter ice flows soon forced the lightship to weigh anchor. After the successful completion of the Brandywine Shoal Lighthouse (which we also visited), the Lighthouse Board approved the construction of the Cross Ledge Lighthouse. Work started on the new lighthouse in 1856 but winter iceflows destroyed the new construction before it was completed. Lightships continued to mark the dangerous site until 1875, when a new lighthouse was finally completed.

In the end, it wasn’t ice or weather that resulted in the now-vacant pier, but rather, two metal lighthouses, Elbow of Cross Ledge and Miah Maull Shoal, which were built nearby. No longer necessary, Cross Ledge Lighthouse was discontinued in 1910. 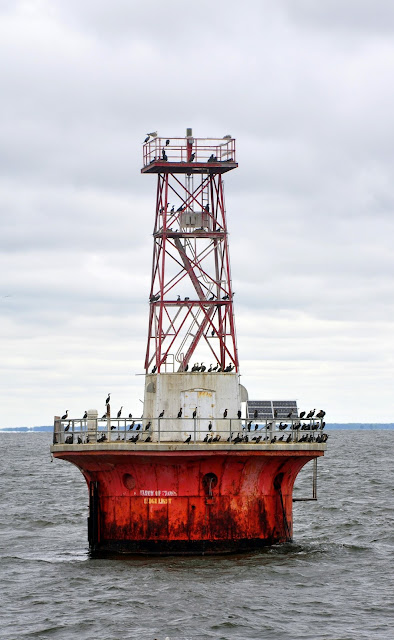 Sadly, nothing remains of this historic lighthouse. It lay abandoned until it became a target for training missions from the Naval Air Station at Wildwood, NJ. During the war, pilots for carrier air groups and fighter-bomber squadrons flew training sorties over Delaware Bay and dropped small practice bombs (reportedly, sacks of flour) on the defenseless lighthouse. Amazingly, the lighthouse was still pretty much intact after the war, but the Coast Guard, for safety reasons, reportedly burned what remained in 1962.

Today, the hexagonal base serves as a perch for numerous seabirds, and quite surprisingly the granite pier has no light to warn mariners of this man-made obstacle. What for years functioned as a navigational aid has now become a hazard.

The next light we went to see was an ugly one -- again, the historic lighthouse itself did not remain. Despite the then existing lighthouse marking the cross ledge shoal, the Lighthouse Board decided at the turn of the century that maritime traffic would be better served with a lighthouse positioned just over two miles northwest of the original Cross Ledge Lighthouse on an “elbow” of the ledge that protruded toward the main shipping channel. Work began in January 1907, but a September storm destroyed the new construction, killing at least one construction worker, and stranding a government inspector for several days on the ruins of the construction until he could be rescued 2 days later.

This lighthouse may not have necessarily served its purpose well, as its crew was known for sleeping in life jackets. When visibility was poor due to the bay's famous fogs, ships often passed so near the lighthouse that the whole building throbbed and shuddered from the vibrations of the ship engines and often suffered glancing blows from ships. The crew slept in life jackets so they could jump into the bay at a moment's notice in case the lighthouse came tumbling down around them. The lighthouse was automated in 1951, a lucky thing, because just 2 years later, the crews' fears were realized when a boat struck and partially destroyed the lighthouse. The Coast Guard contracted to have it fully demolished, leaving only the platform, upon which the current light -- now solar powered -- remains. 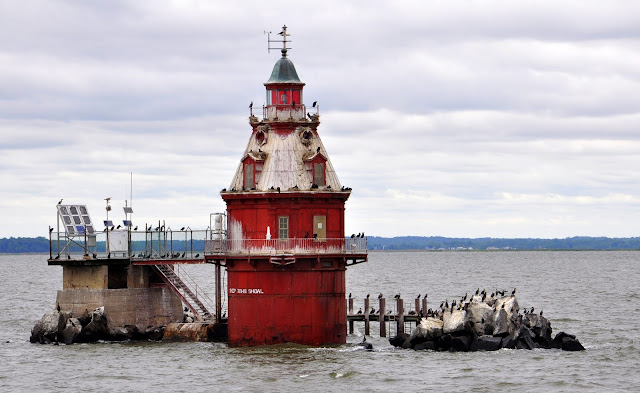 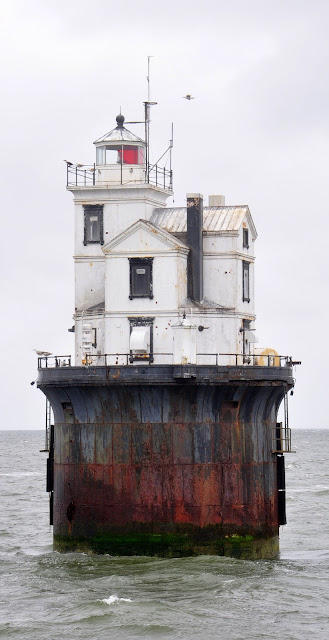 The Ship John Shoal Light marks the north side of the ship channel in Delaware Bay on the east coast of the United States, near the Bombay Hook National Wildlife Refuge. Ship John Shoal took its name from an incident in 1797 in which the John ran aground while on the way from Hamburg, Germany to Philadelphia. Passengers and cargo were unloaded safely, but the vessel was lost. In 1877, the lighthouse was completed and inhabited. In 1973 the light was automated.

After Cross Ledge Lighthouse was completed in late 1875, lightship LV 19 was withdrawn, repaired, and then redeployed the following summer at Fourteen Foot Bank, which is an oval shoal located three-and-a-half miles from the Delaware shore. Fourteen Foot Bank Lighthouse was activated for the first time on April 10, 1887. This lighthouse had several deaths, and I had hopes we'd hear a ghost story about it (no, disappointingly!). One lightkeeper committed suicide at the lighthouse. Another passed away peacefully in his sleep after serving as a lightkeeper for close to two decades. The lighthouse was automated in 1973 and excessed and sold several decades later. Now the current owner has plans to convert it to a micro-brewery. An interesting fate for such a noble structure.

This current Brandywine Shoal Lighthouse -- the second structure at that location -- was completed in 1914, featured a reinforced concrete superstructure on a cast iron and concrete caisson, resting upon wooden and precast concrete piles. The superstructure of the old light was removed, but the platform remained into the 1950s, used by the Navy for various purposes. In support of this, a small artificial harbor was constructed using a partial circle of riprap; it remains in place, though the last traces of the old light have since been removed. The light was automated in 1974, by which time it was the last manned station on Delaware Bay. It continues to serve as an active aid to navigation. Currently, a preservation society is trying to restore the lighthouse and conduct tours of the interior. I'd love to explore inside one of these lighthouses!

Dolphins weren't the only wildlife we spotted during the excursion. On the way back into Cape May Canal, we were lucky enough to see a bald eagle! 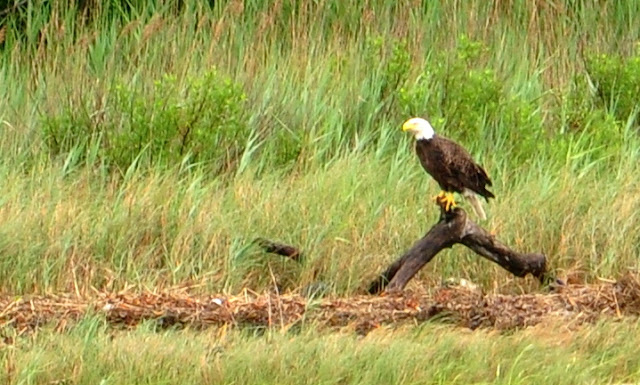 Getting there: The Cape May Whale Watcher Lighthouse Tour leaves from

Dogs: Not on this one. 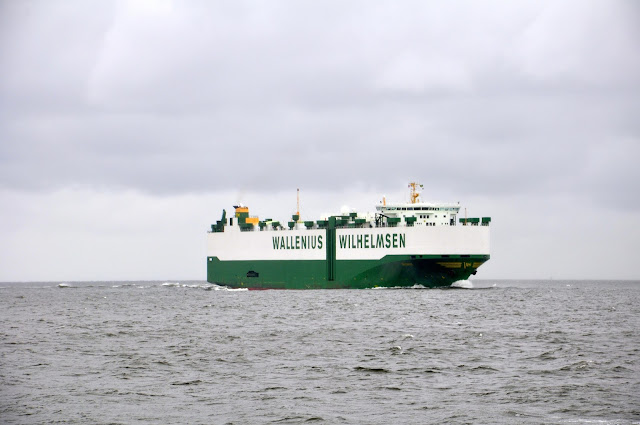