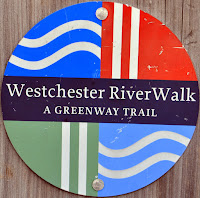 We were actually playing Ingress -- I've blogged about how that game has led us into accidental day trips before -- and I saw a "mission" called Riverwalk. It sounded promising -- we were only a mile or so away from the Hudson River and I was hoping for some lovely views. We were having dinner in Sleepy Hollow, at a cute and quite sufficient bar and grill called Horsefeathers, and discussing what we'd like to do on our only evening in the town. My husband and I decided upon completing several local Ingress missions. And in so doing, we discovered a gem. 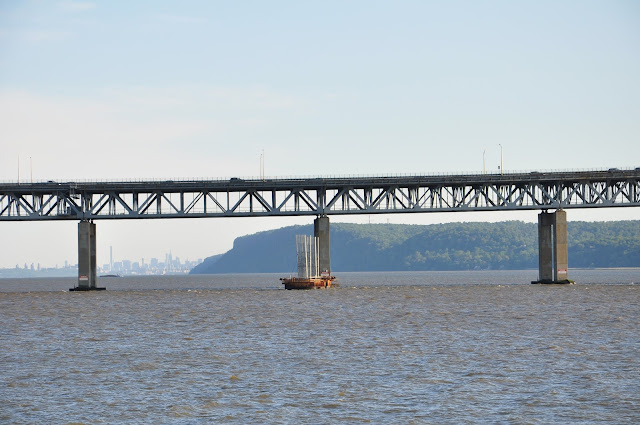 I'm jealous, frankly. Although we Marylanders have the 184 miles of the C&O Canal, I still covet the soon to be completed 51-mile stretch of the Riverwalk! The Riverwalk is one of those cool things that should happen but so seldom do. And when it does, it's wonderful! It came about because an organization by the name of Scenic Hudson partnered with the village, county and developer Natural RE/sources to turn this longtime industrial site into a waterfront park offering magnificent views stretching from the Manhattan skyline to the Tappan Zee Bridge.

While strolling along the walk, we watched jet skiers splash in the water, a boat zoom by, and in the distance, the New York skyline through the old Tappen Zee Bridge. A new bridge is just being built alongside, and signs along the walk explained the various construction support boats and barges. On the walk itself, couples and families with small children laughed and played. I'm happy to report that although the walk is not crowded, it's well used! 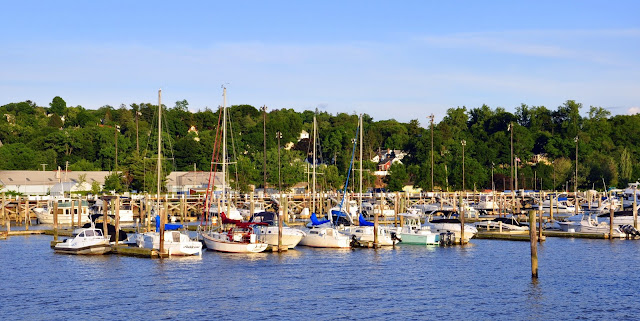 There's a riverside esplanade, a series of grass terraces and lawns, and an "eco-corridor" filled with native plants. Tarrytown can claim only a segment of the planned 51-mile Westchester County RiverWalk. 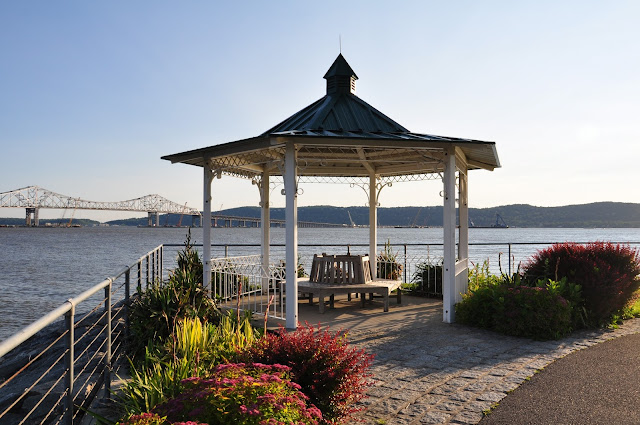 We stopped by the Sleepy Hollow Lighthouse, at the end of the Riverwalk. It was a fitting end to a lovely day in Sleepy Hollow as well! 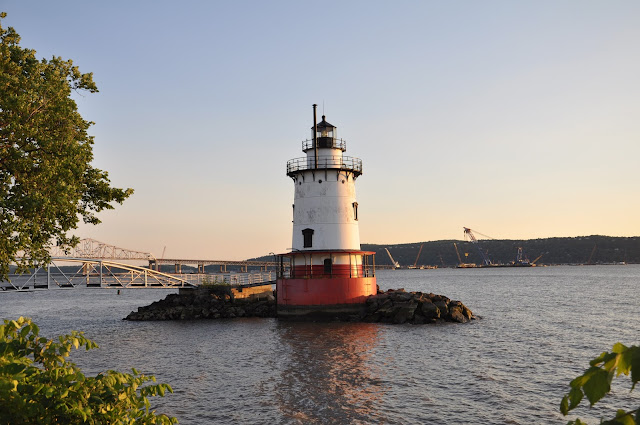 Dogs: No better place for them!! 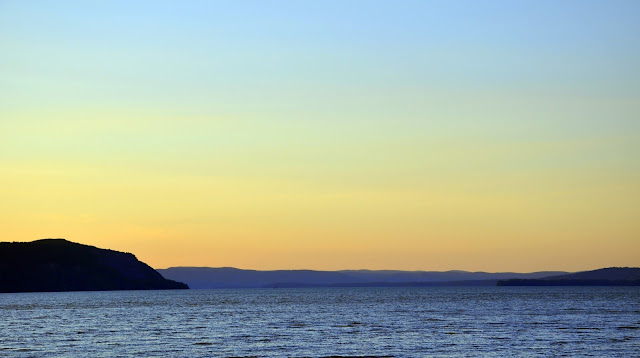 Posted by Jody Arneson at 6:04 PM No comments:

The mention of Sleepy Hollow conjures up creepy images of the Headless Horseman riding at midnight after poor, silly Ichabod Crane. But there's a sunnier side of Sleepy Hollow/Tarrytown, NY!

In American Lit in college we studied, among others, Washington Irving (April 3, 1783 – November 28, 1859), who was an American author, essayist, biographer, historian, and diplomat of the early 19th century. You probably know him for his short story, "The Legend of Sleepy Hollow," which recounts the misadventures of Ichabod Crane, who tangled with the infamous Headless Horseman. Irving is indelibly linked to Sleepy Hollow. 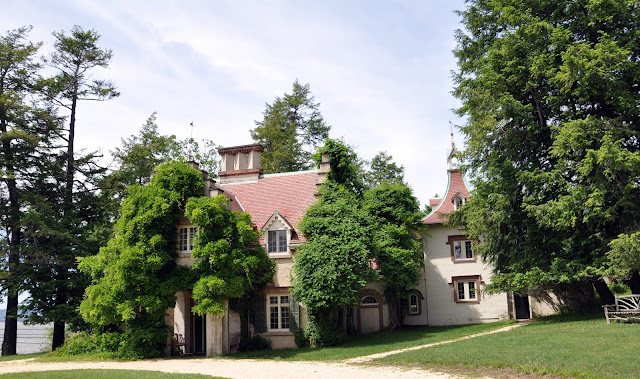 But he got there entirely by chance. In 1798 there was an outbreak of yellow fever in Manhattan, which prompted his family to send him, then a child, to a healthier location upriver. Thus it was that Irving was dispatched to stay with family friend James Kirke Paulding in Tarrytown, NY. He stayed at a farm cottage. It was in Tarrytown that Irving became familiar with the nearby town of Sleepy Hollow, with its quaint Dutch customs and local ghost stories.

He wrote "The Legend of Sleepy Hollow" in 1820, while he was in England. That story, along with his other famous story, "Rip Van Winkle," were published as part of Irving's book, The Sketch Book of Geoffrey Crayon, Gent.

Fifteen years later, Irving returned to Tarry Town and Sleepy Hollow and purchased the neglected farm cottage and its surrounding riverfront property. "It is a beautiful spot," Irving wrote, "capable of being made a little paradise." The house, which he named Sunnyside, required constant repair and renovation over the next 20 years. The grounds reflect Washington Irving's romantic view of art, nature, and history. He arranged garden paths, trees and shrubs, vistas, and water features to appear natural, and planted an exotic wisteria vine (still growing) to envelope the house. I recommend visited Sunnyside when the wisteria is in bloom -- it must be amazing. 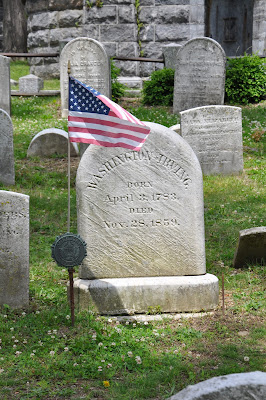 Sunnyside contains a large collection of Irving's original furnishings and accessories. In particular, all furniture and most accessories in his writer's study are original. The study, dining room, parlor, kitchen, as well as most bedrooms, are open to the public and contain much of their original furnishings, or replacements which were owned by the Irving family.

He died there, in his beloved home. On the night of November 28, 1859, at 9 pm, Irving died of a heart attack in his bedroom at the age of 76. He was buried under a simple headstone at Sleepy Hollow Cemetery, overlooking the Old Dutch Church Burial Ground, which is where the headless Hessian soldier is purportedly buried.

Posted by Jody Arneson at 7:19 PM No comments:

The Legend of Sleepy Hollow Cemetery

It was only recently that I learned that Sleepy Hollow, made famous by Washington Irving's story,
"The Legend of Sleepy Hollow," was a real place. So, although it's a little out of day trip range for Marylanders -- I justified the excursion and this blog with the knowledge that the Mid-Atlantic Day Trips Blog's northern mid-Atlantic readers could easily reach Sleepy Hollow in a day trip!

The legend that made Sleepy Hollow so famous is a ghost story, pure and simple: a Hessian soldier was separated from his head .... oh, Irving tells it much better in an excerpt from his short story:

"The dominant spirit, however, that haunts this enchanted region, and seems to be commander-in-chief of all the powers of the air, is the apparition of a figure on horseback, without a head. It is said by some to be the ghost of a Hessian trooper, whose head had been carried away by a cannon-ball, in some nameless battle during the Revolutionary War, and who is ever and anon seen by the country folk hurrying along in the gloom of night, as if on the wings of the wind."

At midnight he rides out in search of his head; threatening all living creatures he encounters while he's out and about. Purportedly, this Hessian soldier is buried at the Old Dutch Church burial ground, adjacent to the Sleepy Hollow Cemetery, which didn't exist during Irving's lifetime.


Sleepy Hollow Cemetery surrounds the Old Dutch Church Burial Ground, and in fact, Irving himself is buried there on a hill overlooking the older cemetery, made famous by his story. Incorporated in 1849 as Tarrytown Cemetery, it posthumously honored Irving's request that it change its name to Sleepy Hollow Cemetery.

Sleepy Hollow Cemetery holds its fair share of the rich and famous. Names like Carnegie, Rockefeller, Chrysler (of both building and car fame); mayors, congressmen, and governors; radio stars, musicians, and famous 19th century stage actors; artists, authors, and journalists (including one of the founders of the New York Times); architects and railroad barons.

This cemetery isn't like the other mid-1800s era cemeteries I've visited in the past year or so. The grave markers are more modest overall. Even the rich and famous folks' mausoleums are richly austere. There were a few ornate markers, such as the Owen Jones monument pictured above. 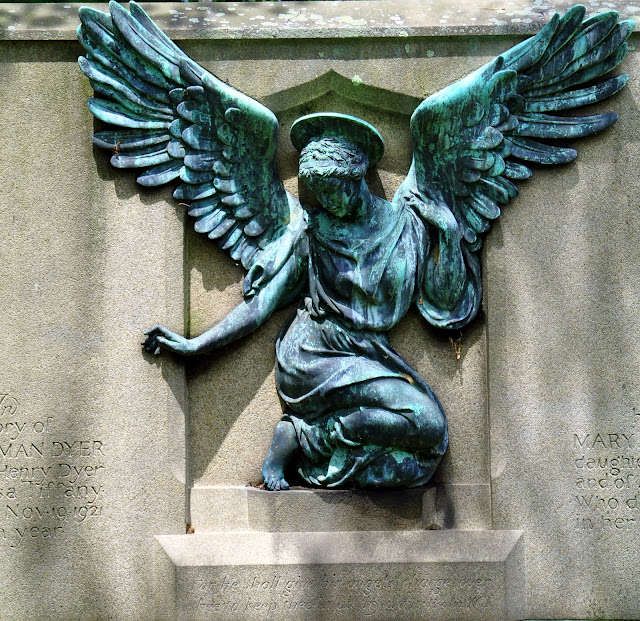 If you're an Irving fan, then you'll be happy to note that Tarrytown/Sleepy Hollow is a quaint little town -- at least the part along US Route 9, alternately referred to as Broadway in the town itself. That's the part that the doomed Ichabod Crane famously rode, although in the story it was called the Albany Post Road. 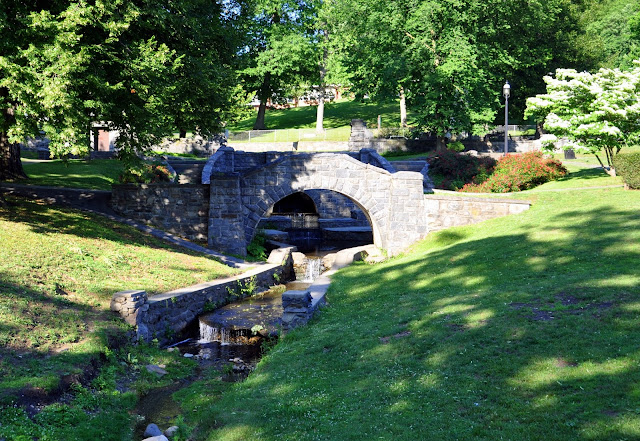 The cool thing about Sleepy Hollow is that you can easily trace Ichabod Crane’s breathless ride: From the site of the Elizabeth Van Tassel house (now the Landmark Condominium, northeast corner of Hamilton Place and North Broadway in Tarrytown), walk north about a third of a mile on US 9/North Broadway to the André captors’ monument in Patriots Park, the spot where Ichabod was met by the headless horseman. Since you're there, stroll around this pleasant little park. Although the landscape has changed since Irving's time -- gone are the wetlands where Ichabod initially encountered the unpleasant haunt -- the stream that created those wetlands still flows through the park. From the park, gallop frantically down the hill and back up again along Broadway until you reach the Old Dutch Church, just over 1/2 mile away.

Irving in his story mentions how Ichabod would stroll with his students (and their fair sisters) along the banks of the old mill pond -- probably Philipsburg Mill Pond, which still exists and is open for tours. 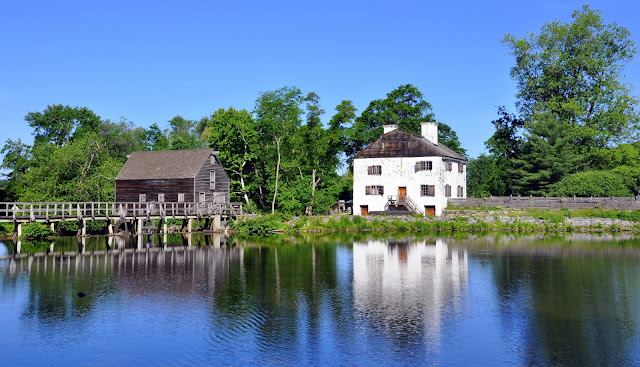 The burying ground in which the unfortunate Ichabod sought refuge is the yard of the Old Dutch Church, not the adjacent Sleepy Hollow Cemetery, which had not been established at the time Irving wrote the Legend. The burying ground is of course the purported haunt of the headless Hessian, but also the resting place of local citizens who likely inspired Irving’s characters of Katrina Van Tassel, Brom Bones, and others in “The Legend of Sleepy Hollow.”

In the cemetery there's a rustic looking bridge that is lovely in its own right, and this is called the "Sleepy Hollow Bridge." Although the actual place where the Albany Post Road actually crossed the small river/large stream is hard or impossible to figure out, it most likely was somewhere in the cemetery -- apparently US 9's current route differs some from the original ancient road. Sadly, the famous bridge where Ichabod was unseated by a pumpkin no longer exists. A local historian has in fact documented five different versions of the bridge, each being replaced by the other, including the latest, the circa 1912 bridge that carries US 9 over the stream. 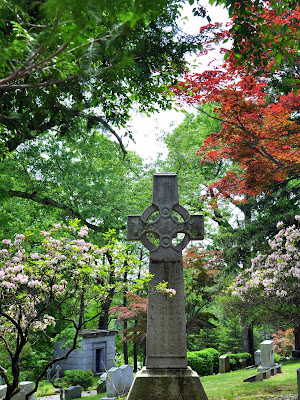 Tip: The cemetery offers free legal-sized maps —perfect for a short, self-guided tour to 8 major figures including Washington Irving, Andrew Carnegie, Walter Chrysler, and Elizabeth Arden. Pick up a copy at the cemetery office at 540 North Broadway or from the literature box at the cemetery’s south gate, adjacent to the Old Dutch Church. For a more detailed experience, the Cemetery also offers for salea full-color, 17” x 20” map to more than 50 special features of the cemetery. Purchase at the Philipsburg Manor museum shop across the street from the cemetery’s south gate or online through SleepyHollowGiftsOnline.com.

Dogs: Yes, but please pick up after them!

Have you daytripped somewhere interesting? I'd love to hear what you're doing! Email [email protected] if you're interested in being a guest-blogger!
Posted by Jody Arneson at 7:39 PM No comments: