I'd heard about Maryland's state dessert for years, but never tried it. And since the 2-day trip on the Southern Lights excursion aboard the MV Sharpes Island with Captain Jack and the afternoon visit to nearby Tangier Island (VA), I've wanted to visit Smith Island.

I was hoping it was as cute and quaint as Tangier Island. But I also hoped it would be better -- because it's Maryland's quaint and cute island.

Once home to 800 residents, Smith Island now has 240 year round residents, spread between the villages of Ewell, Rhodes Point and Tylerton. Smith Island isn't one of the Chesapeake Bay's disappearing islands, yet. But it has been shrinking in size for centuries, due to a combination of its low elevation and storm erosion. In the last 150 years, Smith Island has lost more than 3,300 acres of wetlands due to erosion, although efforts are now underway to prevent the island from being lost; these restoration efforts will last for the next 50 years and will restore 1,900 acres of submerged aquatic vegetation and 240 acres of wetlands.

Catching and marketing soft shell crabs is the island's primary industry. Many of the islanders get jobs on the barges plying the Bay or work on the mainland. 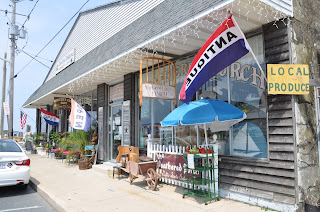 If you want to get there, you'll do so by boat or ferry. Passenger-only ferries connect Smith Island at Ewell to Solomons, MD, on the Western shore of the Chesapeake Bay or from Crisfield, MD on its Eastern Shore, which is where we caught the ferry over. There are several restaurants in Crisfield, but don't waste your time asking for a recommendation from the ferry ticket sales office: they will suggest you wait to eat on Smith Island. When I said we wanted to eat before then, they still didn't offer any names. Oh well. Crisfield isn't huge: go down to the docks following the main drag in and you'll find a couple of restaurants, where you can get a tasty sandwich.

It was a pleasant hour-long ride, during which we passed Janes Island and the remnants of an old packing plant just outside of Crisfield. We'd have about 2 to 2 1/2 hours on the island before the ferry took us back to Crisfield.

When we arrived on the island, we were docked right in front of one of the town's two restaurants (although the second one didn't look open). Many of the other passengers decided to have lunch. Since we'd dined in Crisfield before boarding the ferry, we decided to just have dessert instead. 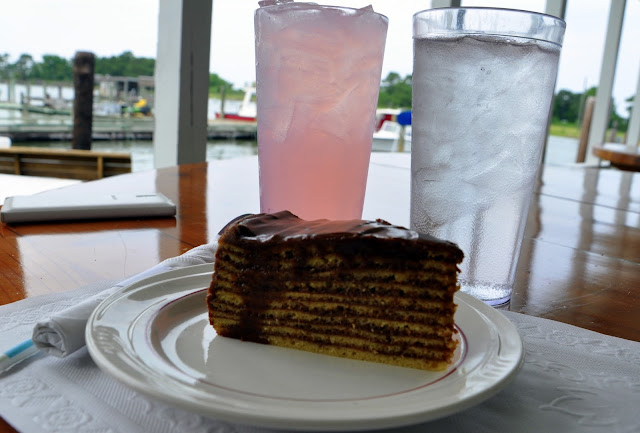 Beginning in the 1800s, Smith Islanders would send these cakes with the watermen on the autumn oyster harvest. Now the cake is often made using a commercial cake mix but with unique additions such as condensed milk, which makes the cake part heavier and more sturdy. It can also be made from scratch using flour. The dessert is baked for any occasion and not reserved only for holidays. Locals told us that girls weren't considered to be marriageable until they could bake a decent Smith Island Cake. Well, I would have been screwed: I still can't bake a cake from scratch.

Interested in trying to make this cake the easy way?

Directions: Place all ingredients in a bow and mix for 10 minutes. Put roughly 3/4 cup batter in greased cake pans (I use a light coating of Pam cooking spray). Use the back of a spoon to gently and evening spread the batter to cover the bottom of each pan. Place in a 350 degree oven and bake for 8 - 10 minutes or until the edge starts to brown. Repeat over and over. Batter should yield 8 layers.

Directions: Put powdered sugar, cocoa, evaporated milk in medium sauce pan and mix together. Add cold butter. Place over high heat, stirring constantly until ingredients are combined and butter is melted. Remove from heat and whip icing a few times before icing cake. Icing should have a glossy appearance.
Putting it together:
Add dollop of icing in the middle of the cake plate or cardboard round and put the first layer in place. Add large spoonful of icing to the top of the layer and, working quickly, spread the icing to the edges of the cake. Place the 2nd layer and repeat, through the 7th layer. Add top layer, spread icing on the sides of the cake first and then finish frosting the top.
On the island you may notice that Smith Islanders have a peculiar accent. Not so much like old English anymore, but it does stand out from the typical southern Maryland accent. Apparently, this accent stems from the island being so isolated throughout the years. It originally was settled in 1686 by English farmers John Evans and John Tyler (hence, Tylerton). Also worth noting: Smith Island became a base of operations during the Revolutionary War for British troops.

You'll notice, too, when you visit, that Smith Island, like Tangier Island, is very Methodist. The Methodist church is the largest, and the island is dry due to its Methodist heritage (traditional Methodists eschewed cards, alcohol, and dancing; modern Methodists have largely made their peace with these sins, but the island retains its conservative heritage).

So what is there to do on Smith Island? Not much, really, and that's the attraction of it. Relax and enjoy the water sights and scenery. Rent a bicycle and ride around the island (that's my top recommendation). Or rent a golf cart -- which is what we did -- and explore the island.

If you stay over night at one of the island's few bed and breakfast inns (2-night minimum stay required), you'll have the opportunity to go kayaking through the island and marshes. The meandering creeks, or "guts," through the island's 8,000 acres of marsh provide extensive opportunities for paddlers and photographers. You could also take a boat over to Tylerton, accessible only by boat, even from Ewell. Or you could take the ferry to one of the other nearby islands, including Tangier. 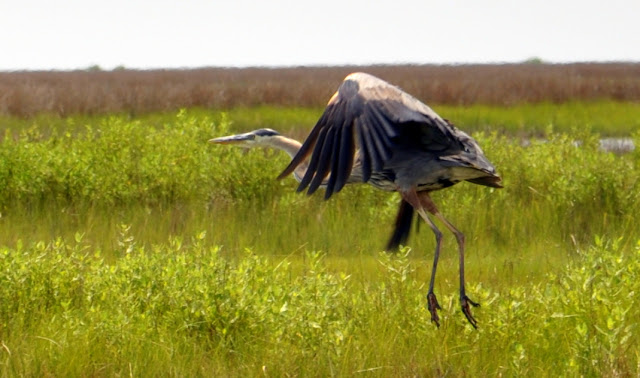 The shallow waters surrounding Smith Island are a fishing haven for herons, egrets, ibis, osprey and pelicans. The northern part of the island is home to the Martin National Wildlife Refuge, making the island a destination for bird watchers in certain seasons. We didn't venture very far out of Ewell, and only saw a great blue heron, a green heron, and an egret -- ubiquitous throughout wetlands in the mid-Atlantic region, but still very cool birds.

Tip #1: If you rent a golf cart, 30 minutes is plenty to explore the WHOLE area around Ewell. We wre greedy so we rented it for a full hour: we rode around the twice, taking some time to explore the lovely and deteriorating old gable houses. I felt sure they must be haunted, if only with the memories of a way of life that is fast disappearing. 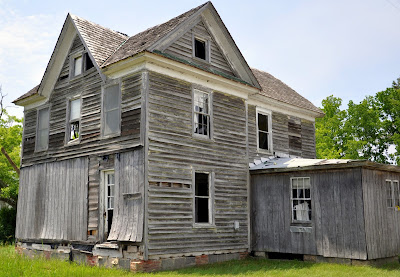 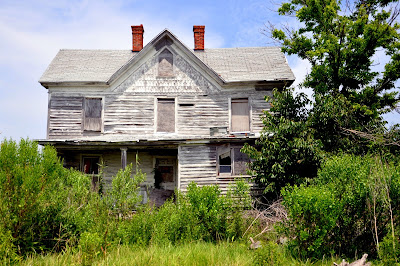 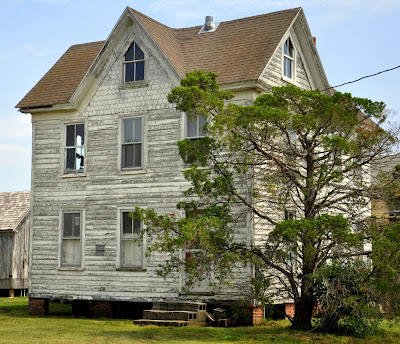 Tip #2: In Ewell, The Bayside Inn and Ruke's (which seemed to be closed on the weekday we were there) are located close to the ferry and the Smith Island Heritage Center. The Bayside Inn also offers hand-scooped ice cream.

Tip #3: Take a half hour to visit the Smith Island Cultural Center and museum. Jam packed with history and interesting information about the island, it's well worth the couple-dollar entry fee. You will learn, among other things, that there are 100 operational cars, trucks, and buses on the island, but that there are over 200 vehicles buried on the island.

Getting there: You can catch ferries to Smith Island from several points. The Capt Jason II passenger ferry, which we took, leaves from Crisfield or from Solomon's Island. The ride from Solomon's Island is longer than from Crisfield, but the drive from Baltimore is longer to Crisfield, so it's six and one half dozen the other which point you catch the ferry; I suppose the longer ferry ride would have been very enjoyable. You can catch ferries, I believe, from other towns as well.

Dogs: Surprisingly, yes! Your pooch, if you go during the summer months, can dine with you on the restaurant's porch and is welcome on the ferry, as long as your pooch leaves the Captain's dog alone. 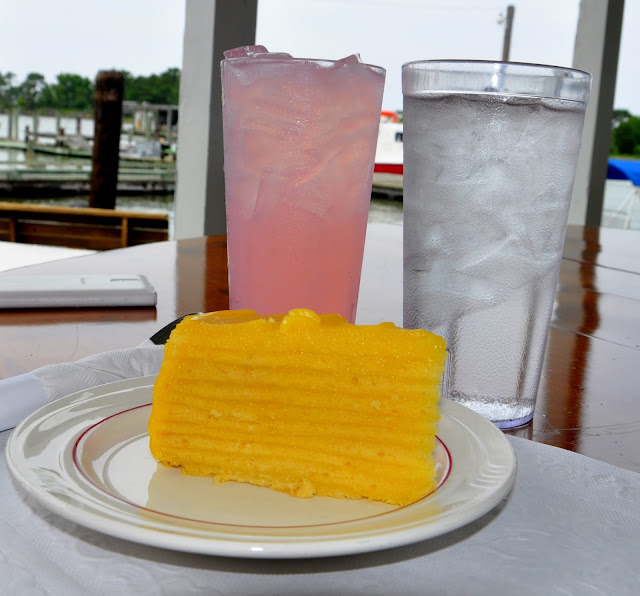