Getting to Know the Town of Gettysburg

This is part one of a five-part series over the next 2 months focusing on Gettysburg, PA as a great day trip destination. There is so much to do there -- from strolling around the quaint town itself and eating at one of the taverns or cafes to touring the battlefields. My friend and I spent a whirlwind day up there recently, making the most of our time.

Just over an hour away from Baltimore or D.C., it's a great day trip destination!


"Suddenly we behold an explosion; it is that of a caisson. We see a man thrown
high in the air and come down in a wheat field close by. He is picked up and
carried into the house. As they pass by I see that his eyes are blown out and
his whole person is one black mass."
--Mrs. Tillie Pierce Alleman

A good friend and I recently spent a Saturday strolling around Gettysburg and getting to know it. We learned some things. There are a lot of antique and boutique shops to browse. There are also a number of wineries in town. So much fun! And plenty of places to eat. 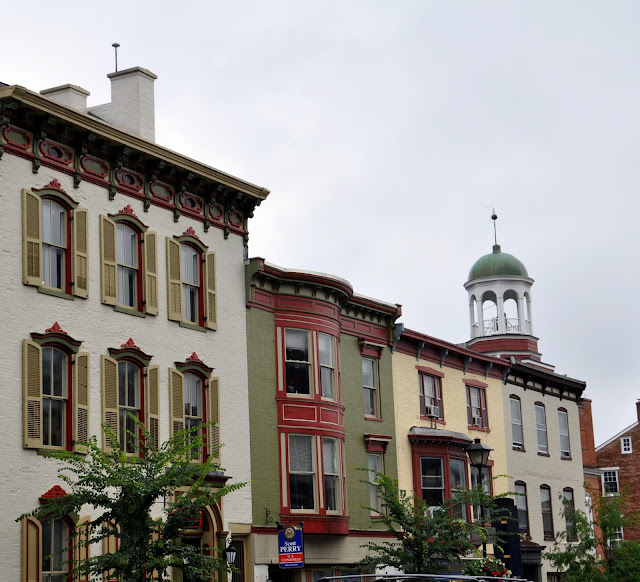 We chose The Blue and the Grey Bar & Grill for lunch, on the main square. The Blue and Grey totally plays on the battle that raged around and through Gettysburg. You can start with Artillery Fire (fresh jalapeno peppers stuffed with cream cheese and wrapped in bacon) or Sharpshooter Cheese Stix (American, cheddar and Pepper Jack cheeses rolled by hand in a wonton then deep fried). Burgers are named for Union and Confederate generals and served with the appropriate flags acting like toothpicks. 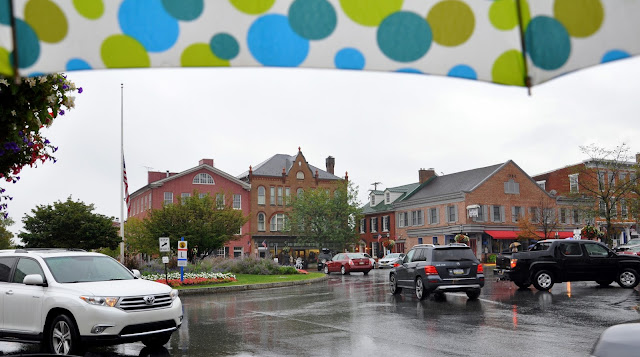 In some ways, Gettysburg -- the city, not the battlefield -- is overlooked. Battlefield tourists drive right through it getting from one battle field to another, anxiously scanning the materials to ensure we're understanding the battle as it unfolded (I've been visiting the battlefields for years and still can't claim to understand the battle entirely, although major moments stand out -- The Devil's Den, Seminary Ridge, The Round Tops. And of course, Picketts Charge, and "High Water Mark of the Confederacy" marking the farthest point reached by Confederate forces during Pickett's Charge on July 3, 1863. What we battlefield tourists forget, or fail to realize, is that the town itself was a battlefield.

And a few names stand out, such as Jennie Wade, the only civilian killed during the battle. But what about John Burns, the 67-year-old man who joined the Union troops to defend Gettysburg? And the brave civilians who sheltered and hid Union soldiers while Gettysburg itself was occupied by the Confederates?

So this visit, I paid more attention to the civilian experience, which was brought to life by the new museum, The Gettysburg Heritage Center, and by the Shriver House Museum (more on both in upcoming posts).

"Officers dashed through the streets ordering everyone to their cellars, as the town
would be shelled; people running hither and thither, not knowing what to do
or where to go for safety. The battle had commenced. The wounded were
being brought in. Here was women's work, and they did it nobly."
-- Fannie J. Buehler

As you walk around you begin to notice things you can't from a car. Bullet holes in the brick store fronts. Plaques announcing which buildings hail from the Civil War era (those are the ones, logically, with the bullet holes). One home has a cannonball embedded.

At the time of the Civil War, Gettysburg had approximately 2500 residents, mostly women and children (since the many of the local men had joined in the Union war effort). During the battle, they either took shelter in their cellars or sought refuge with friends or relatives in farm houses away from the center of town.

As you walk around the main square, take some time to stroll down some of the streets leading off of the square. Eventually, though, you'll want to walk down Baltimore Street. Check out the art galleries and definitely check out the Shriver House Museum to get a better sense of what civilian life was like during and after the battle. 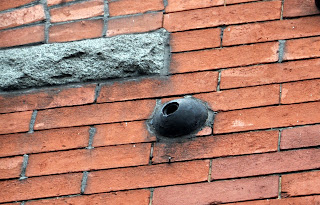 "About 4 o'clock P.M. the storm burst again with terrific violence. It seemed as
though heaven and earth were being rolled together. For better security
we went to the house of a neighbor and occupied the cellar, by far the most
comfortable part of the house. Whilst there a shell struck the house,
but mercifully did not burst, but remained embedded in the wall, one half protruding."
--Sarah M. Broadhead 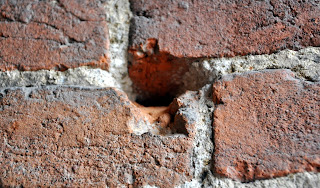 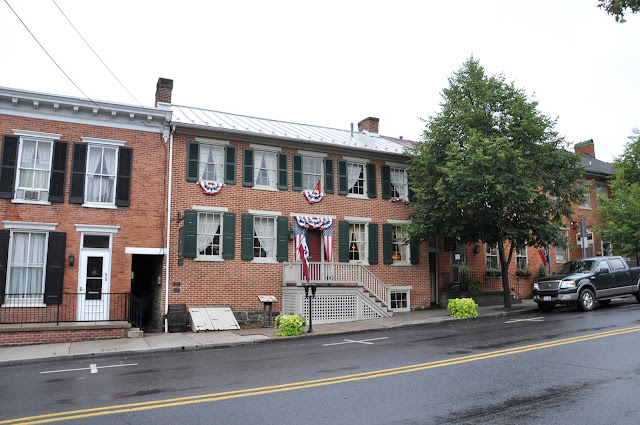 A little further still down Baltimore Street is the Farnsworth House, named after Brigadier General Elon John Farnsworth, who led an ill-fated charge after the failure of Pickett's charge which claimed the lives of Farnsworth and 65 of his men. The house itself dates to 1810, although the brick structure dates to 1833. The house sheltered Confederate sharpshooters during the battle, one of whom is believed to have killed Jennie Wade, the only civilian who died during the battle. 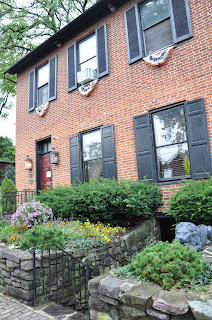 More than 100 bullet holes mark the walls of Farnsworth House. Following the battle, the house, like many others, operated as a hospital. Now operated as a Bed and Breakfast and a restaurant, in the back of the house is Sweney Tavern, a family friendly restaurant with a menu that features Pennsylvania Dutch dishes such as game pie, slippy chicken pot pie, and others. The Saturday evening we were there the place was jam-packed, and we could understand why. The food was excellent. Sweney Tavern is named after Harvey Sweney, who owned the house at the time of the battle. At Sweney Tavern, you can see a display of memorabilia from the movie "Gettysburg,"

Although we didn't have time to do it on this jam-packed day in Gettysburg, I recommend going on the self-guided walking tour of Historic Downtown Gettysburg, offered by Destination Gettysburg. During the tour, you'll learn more about life in Gettysburg before, during, and days after the fateful days of the Civil War.

Free copies of the tour brochure are available at the Destination Gettysburg Information Center or mailed by request. Please call 800-337-5015 or email [email protected]

Know before you go #1: If you're there Monday through Saturday, parking can be a problem. Make sure you bring change to feed the meters. Sundays you park free.

Know before you go #2: There's enough to do to fill several days, so why not stay a night or two? There are a number of Bed and Breakfasts and hotels in the area, but don't overlook The Quality Inn, which provides excellent, comfortable lodgings at a family friendly price! You can request a room with three double beds in it if you're bringing the whole family.

Check out the blog's FB page for updates on places we've visited and blogged about:facebook.com/midatlanticdaytrips!

Have you daytripped somewhere interesting? I'd love to hear what you're doing! Email [email protected] if you're interested in being a guest-blogger!
Posted by Jody Arneson at 6:43 PM