My sister and I are determined to visit all the local presidential mansions: Mount Vernon, Monticello, and Montpelier, among them. Montpelier is the estate of our 4th president, James Madison, and one of America's Founding Fathers. He is known for putting his lawyerly training to work by helping write the U.S. Constitution in the late 1700s (with National Constitution Day coming up on 17 September, it's the right time to make a visit to Montpelier!!). He also created the foundation for the Bill of Rights, acted as President Thomas Jefferson's secretary of state, and served two terms as president himself. He is one of our more cerebral presidents. He also shepherded our young nation through the War of 1812.

Montpelier is a several-hour drive from Baltimore, through some lovely countryside in Virginia. As we drove up, we saw race horses being trained in the track on the estate, which is home for 200 horses, most retired.

Born in 1751, Madison grew up in Orange County, Virginia. He was the oldest of 12 children, seven of whom lived to adulthood. His father, James, was a successful planter and owned more than 3,000 acres of land and dozens of slaves. He was also an influential figure in county affairs.

The learned Madison was more of a writer than a fighter, though. And he put his talents to good use in 1776 at the Virginia Convention, as Orange County's representative. Around that time, he met Thomas Jefferson, and the pair soon began what would become a lifelong friendship. In 1780, he went to Philadelphia to serve as one of Virginia's delegates to the Continental Congress.

In 1787, Madison represented Virginia at the Constitution Convention. He was a federalist at heart, and thus campaigned for a strong central government. In the Virginia Plan, he expressed his ideas about forming a three-part federal government, consisting of executive, legislative and judicial branches. Madison gave serious thought to the problems facing the nation and made specific proposals for devising a new constitution. He worked tirelessly to encourage the states to ratify the new Constitution, writing 29 of the 85 anonymous essays comprising The Federalist.

Madison was elected to Congress under the new Constitution, where he served from 1789 until 1797. During this period, in 1794, Madison met and married the widowed Dolley Payne Todd. She had a son named Payne from her first marriage, who Madison raised as his own. Eventually tiring of the political battles, Madison returned to Virginia in 1797 with his wife Dolley. By 1797, he described himself as “wearied with public life” and eager to “indulge his relish for the intellectual pleasures ... and the pursuits of rural life.” He looked forward to enjoying life at Montpelier. (Madison would officially inherit the estate after his father's death in 1801.)

Early in his term, Jefferson appointed Madison as his secretary of state (1801-09). Responsible for foreign affairs and some domestic duties, Madison oversaw significant changes to the young nation, including the Barbary Wars, a major embargo, the Lewis and Clark expeditions, and the Louisiana Purchase, which enlarged the nation by 828,000 square miles.

Dolley would eventually become famous in her own right for saving our national treasures when the British burned the White House. Prior to that, though she was the charming and diplomatic wife of the fourth president of the United States, one-half of America’s first political power couple. Known for her signature hospitality, Dolley served as both Thomas Jefferson’s and James Madison’s official hostess during their respective presidential terms. For 16 years, Dolley was a staple in the Washington social and political scene and is considered to be America's "first First Lady," because she essentially invented the role.

At the conclusion of Jefferson’s second term, Madison was inaugurated as the fourth president of the United States (1809-17), inheriting the unresolved issues stemming from the war between France and Great Britain -- each nation attempted to prevent its rival from trading with the United States. With England boarding U.S. ships and impressing American sailors to fight on British warships, Madison called on Congress to declare war against Great Britain in 1812.


When we toured Montpelier, we selected a tour that focused on six women who'd lived at Montpelier: Madison's mother and grandmother; Dolley (of course); Catherine Taylor, an enslaved woman; an indentured servant; and Marion du Pont. It was an interesting and informative way to tour the mansion, and provided insights into the lives of the families who lived there.

During the Madison family's ownership of the property, between the early 1700s and 1844, hundreds of African and African-American slaves supported (that seems an inadequet word for slavery) the Montpelier plantation. Five, six, and possibly seven generations of African Americans toiled at Montpelier.

The house was acquired in 1901 by William and Annie Rogers du Pont. A horse enthusiast, William built barns, stables, and other buildings for equestrian use. The Du Ponts were among several wealthy families in the upper South who were influential in the development of thoroughbred horse racing in the United States. William and Annie had a daughter, Marion du Pont, and a son, William du Pont, Jr. Upon William du Pont, Sr.'s death in 1928, William du Pont, Jr. inherited the family's Bellevue estate in Delaware, whereupon he had the estate's mansion converted into a replica of Montpelier (now preserved as a state park), and Marion inherited the Montpelier estate. Marion preserved much of the core of the Madison home, gardens, and grounds as a legacy for all Americans. Marion duPont Scott died in 1983 and bequeathed the property to the National Trust for Historic Preservation, with $10 million as an endowment to maintain it. The du Pont love of horses is preserved: the estate serves as a retirement home for retired race horses that would have had few options otherwise.

On our way to Montpelier, we stopped at the old train station near the entrance to the estate. This train station is a small yellow building, constructed in 1910 by the du Pont family to serve as a train depot and post office. Pursuant to existing laws in Virginia and across the South, this building was designed and initially constructed as a segregated public space. White and black passengers were physically separated into two waiting rooms, one marked "white" and the other marked "colored." Although it seems odd to us today, the building and the estate itself still serves as a reminder of America's past and how African Americans were treated. 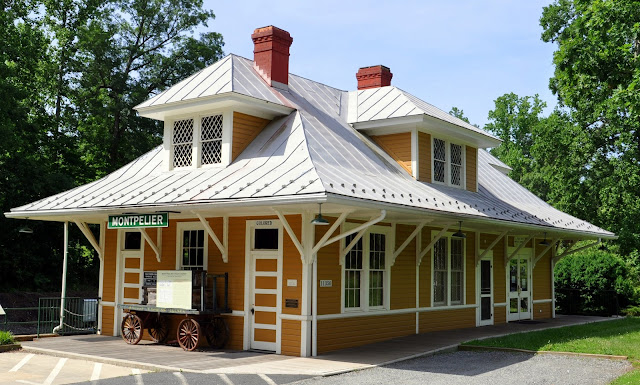 Dogs: Unfortunately, but emphatically, no.

Have you daytripped somewhere interesting? I'd love to hear what you're doing! Email [email protected] if you're interested in being a guest-blogger!
Posted by Jody Arneson at 6:43 PM