Shriver House Museum: The War Through the Eyes of a Family

I'm fascinated by the civilian experience that I learned about at this house museum because I believe my ancestors, who lived on a farm not that far away, may have had similar experiences, although their farm didn't border a battle field. Like the Shrivers, my ancestors were immigrants from Germany. Like the Shrivers, the man of the family went off to the war to fight, leaving his wife and children behind to maintain the farm. 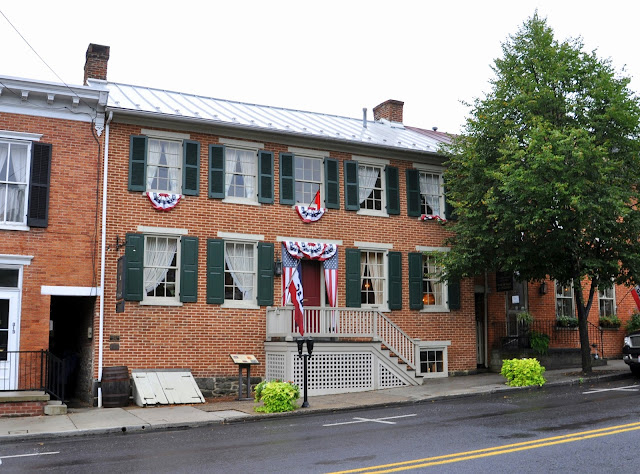 Okay, and back on a personal note, it was cool when I learned his name. My ancestor, George Washington Spertzel, was born just 3 years before on a farm a few miles away, but to the north of Gettysburg. It must have been the fashion of the time to name boys after the country's first president. Anyway, like the Shrivers, my ancestor was the first generation born in this country (making them, I guess, anchor babies).

But back to the Shrivers. It was quite a prosperous farmstead with a sizable farmhouse, bank barn and various smaller outbuildings. George's father was in the business of manufacturing liquor and when he died suddenly in September, 1852, George inherited not only a 200+ acre farm, barn and distillery, but close to 3000 gallons of liquor.

Just a few miles away from the Shriver farmstead lay another prosperous farm which belonged to Jacob and Sarah Weikert. Hettie was the sixth of their thirteen children, born on March 7, 1836.

On January 23, 1855, when they were both eighteen years old, George and Hettie married and immediately started a family of their own. They soon had two children: Sadie and Mollie. 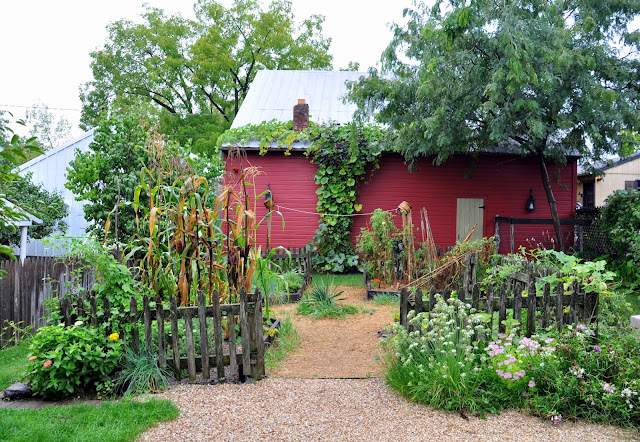 In 1860, they sold part of the farm and purchased a lot on what was then called South Baltimore Hill and built a home that would also provide space for a business for George. Their farming days were over. In the back yard was the Ten Pin Alley and in the basement was a rather pleasant space that served as Shriver's Saloon. Patrons of the saloon walked through a side yard to the saloon's entrance in the rear cellar. There was a a yard to the left of the house, which allowed space for a garden and orchard. There were no houses immediately adjacent to the Shriver House -- those came later, after the Civil War.

George volunteered for service on August 27, 1861 and mustered into Cole's Cavalry, Co. C in Frederick, MD. Not only was the general consensus that the war would be a short one, but George and Hettie believed it would be over by the end of the year. Sadly, that wasn't the way it worked out. 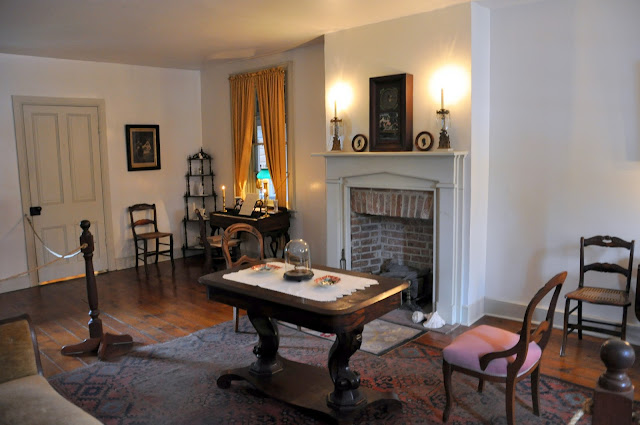 The Battle of Gettysburg began early in the morning on July 1, 1863. At first, residents on the south side of town were not aware of the conflict. Even though Hettie was concerned she went about her daily chores as usual so as not to upset Sadie and Mollie. By 9 am everything changed. The roar of the cannons could be heard and as the noise grew closer Hettie decided it would be best for them to leave and seek safety at her parents' farm about three miles south of town. Before leaving, Hettie called on her next-door neighbors, the Pierces. She suggested their youngest child, Tillie, might accompany her to the safety of the countryside. James and Margaret Pierce agreed. Tillie Pierce wrote down her memories of the Battle of Gettysburg, and recounted her and Hettie's journey to Hettie's parents' farm, just a couple miles away (but through a battle ground). 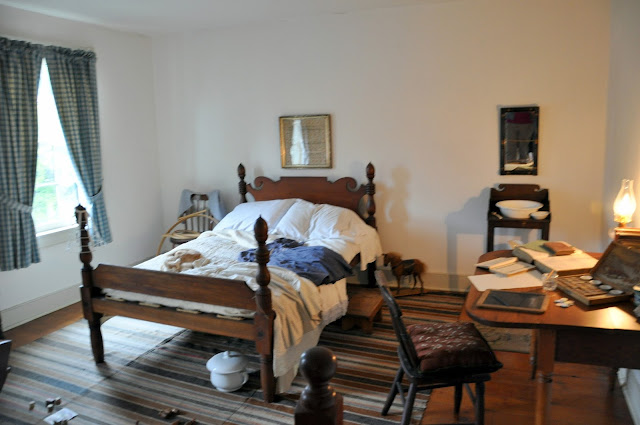 Hettie could not have known they were jumping from the frying pan into the fire. Her family's farm sits between Big Round Top and Little Round Top where some of the worst fighting took place during the Battle of Gettysburg. The noise of the battle over the next 3 days was so loud they had to shout to talk to each other inside the Weikert farmhouse, which shook from the cannons firing all around them. 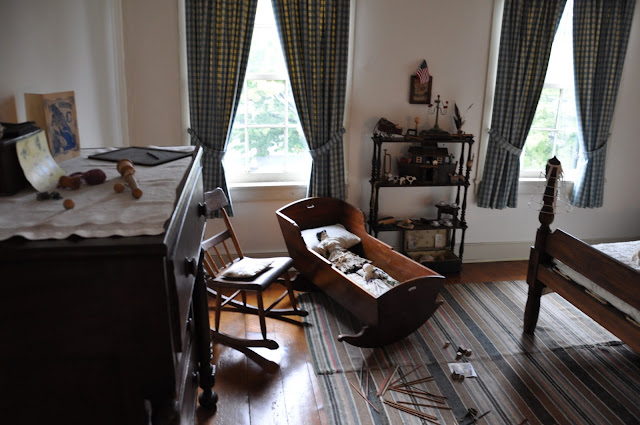 Eventually, though, Hettie decided to return to her home on Baltimore Street. She encountered a mess -- pretty typical for homes abandoned by their owners. Confederate troops had ransacked and destroyed most of the furniture and food stores. Confederate sharp shooters had holed up in the attic, where several had died. By the time Hettie had returned, though, the home was being used as a pseudo hospital. Blood and bloody clothes and rags were strewn throughout the house. Some accounts of other hospitals said that in some homes, there was so much blood that holes would be drilled through the floor to allow the blood to drain, to ensure the surgeons wouldn't slip in the flood of blood. 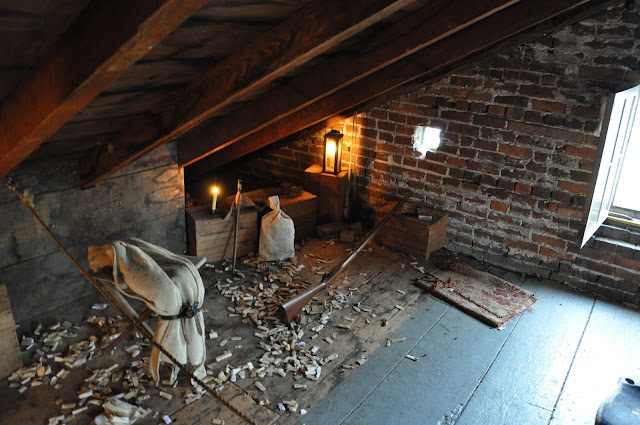 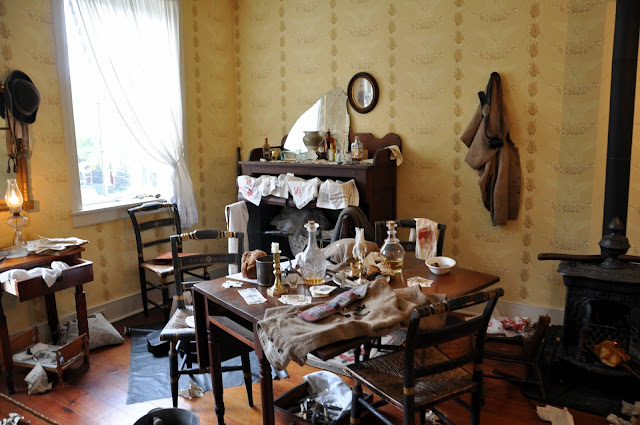 ​Five months after the Battle of Gettysburg, George Shriver was granted a 4-day furlough, giving him the opportunity to spend Christmas with Hettie, Sadie and Mollie. That was the last Hettie would see him. He returned to duty on 29 December, and his unit engaged in off and on fighting with the dreaded Mosby's Rangers near Brandy Station, VA. On New Year's Day, 1864, George was captured by Confederates during a battle and was sent to Andersonville, where he later died. (My ancestor's story ended more happily: he returned home after the Civil War, during which he had enlisted twice, and lived until 1902. He's now buried in a small church cemetery, along Route 34, in Idaville.) 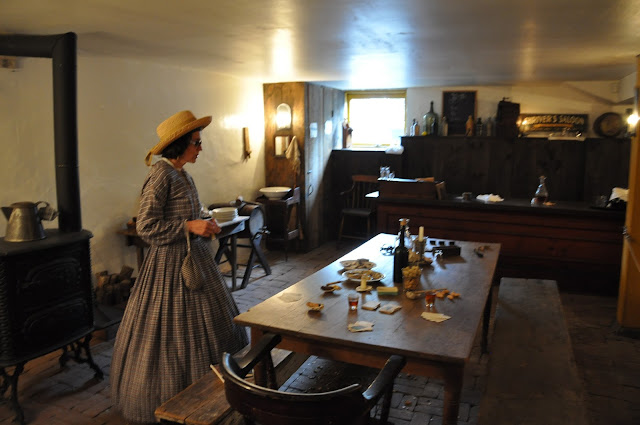 Shriver House Museum is restored to what it looked like during the Civil War, thanks to detailed records kept by Hettie Shriver; although her original furnishings are long gone, furniture closely resembling her descriptions are back in place. The tour takes you throughout the house: you go from the basement to the attics, seeing the saloon and cellar kitchen, the parlors on the first floor, bedrooms on the second floor, and the sniper hideout in the attic, learning the history of the family and how the battle impacted them throughout the tour. The last rooms you see show the house as Hettie might have found it, all her lovely furniture and linens bloody and destroyed.

During our tour, interestingly, a door slammed, and our tour guide winced. No one was there, and the house was locked up and air conditioned -- the door wasn't slamming because of a stray breeze. It was eerie. For the record, Shriver House is #5 in a list of top 10 most haunted spots in Gettysburg. Just saying.

Have you daytripped somewhere interesting? I'd love to hear what you're doing! Email [email protected] if you're interested in being a guest-blogger!
Posted by Jody Arneson at 7:04 PM