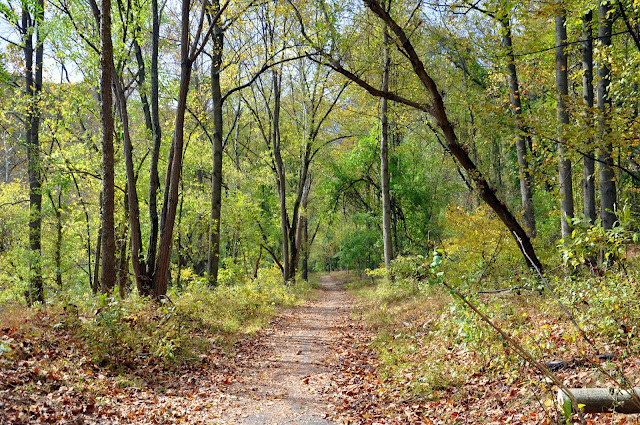 Good friends of ours offered to take us to some "local ruins" that were "only a short hike." They had me at "ruins." I lept at the chance, and so a windy, blustery late October Sunday found us hiking off of Hollifield Road, following what's left of old Alberton Road into the ghost town of Daniels, now part of the Patapsco River Valley State Park (PRVSP). Daniels used to be a mill town with churches, homes, a school, and people. 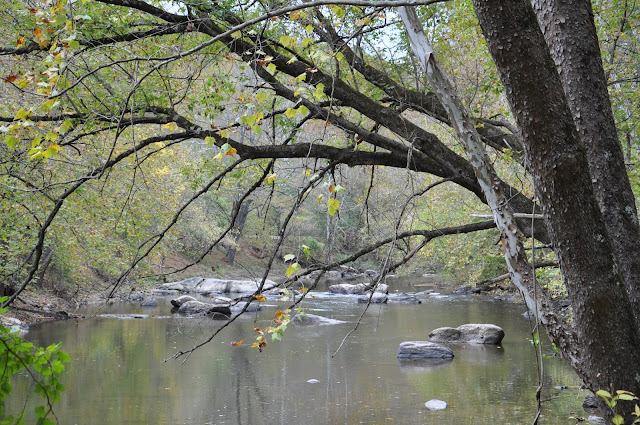 What's left now is a pleasant walk along what's left of the old Alberton Road; ruins of homes and other buildings, including two churches; a forgotten old cemetery (there are rumors of another cemetery lurking behind the Pentecostal church but we couldn't find it); and lovely views of the Patapsco River.

Daniels, originally called Elysville, was a cotton mill town, founded in the 1820s. Lured by the mills, the B&O Railroad came through in 1831. In 1853, the Alberton Manufacturing Company bought the town, renaming it Alberton (hence the name of the road) and held it until the 1870s; the mill was then acquired by James S. Gary, who created still another firm which operated the mill until the 1940s. Eventually the C.R. Daniels Company bought the mill and the town -- 500 acres for $65,000 -- in the 1940s, and the town was renamed again.

It's a lovely walk along the river, not nearly as crowded as the section of the PRVSP near my home and the Grist Mill Trail that I've written about again and again. From Alberton Road into Daniels, just below the Daniels Dam, then up for a quick spur trip to see the mysterious ruins of St. Stanislaus Kostkas Roman Catholic Church and back to the car is an unstrenuous 5 miles. 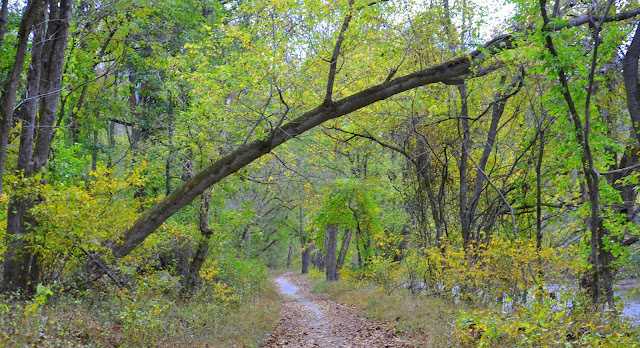 As we walked down old Alberton Road -- much of the path is still the old chipseal road -- you could see some remains of buildings, now mostly just foundation walls a few feet high at most. And the remains of old cars, deposited carelessly around by the floods that destroyed the town in 1972. Our friend, whose great grandfather, grandfather, and father had all lived in Elysville/Alberton/Daniels told us about the town.

Daniels was once a thriving mill town straddling the Patapsco River east of Woodstock and north of Old Ellicott City in Baltimore County and Howard County.


Daniels was never a large town, but it did have two churches -- St. Stanislaus Koska Roman Catholic Church and the Pentecostal Holiness Church -- a general store, a bowling alley, a post office, a library, a pool hall, a ball field, and a restaurant, all but the churches were owned by the mill companies. Eventually, the mill ran into financial difficulties, and in the mid-1960s, the town's decline into a ghost town began as housing for employees was phased out and the large majority of the town's structures were demolished. Flooding from Hurricane Agnes finished what the mill company had begun, and finally Daniels was completely abandoned. Maryland's Department of Natural Resources later acquired the property and it became part of the PRVSP. 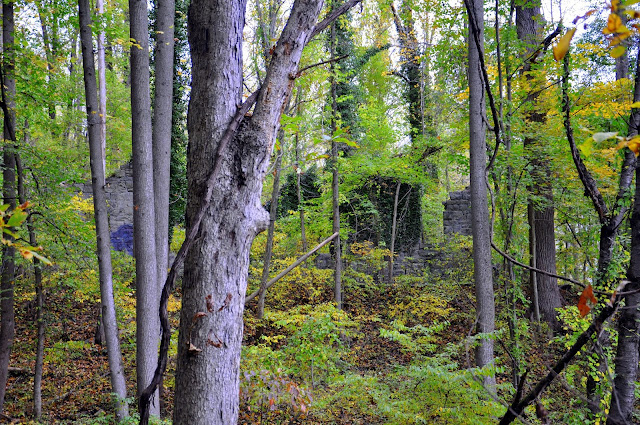 About a third of the way along Alberton Road toward Daniels, there's a fire road that leads away from the river that runs up the hill, taking you to the ruins of St. Stanislaus Kostka Roman Catholic Church, which had been built in 1879. The fire road follows the hillside and curves around until suddenly, across a gulch strewn by old cars, the ruins of the old church loom up, silent and mysterious and partially hidden in the leaves and trees. 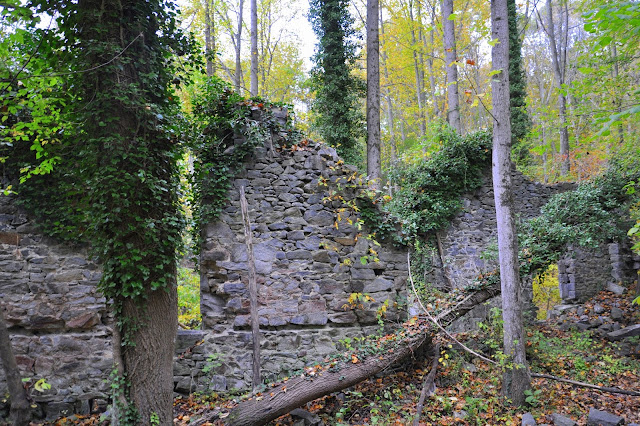 The stone gothic church stood until it was struck by fire and burned in September 1926. The church had no priest (rather, one visited once or twice a month) and thus the church was abandoned after the fire. Behind the church is the old graveyard; now most of the stones have been knocked over or partially destroyed, but a few stand, reminders of a past era. 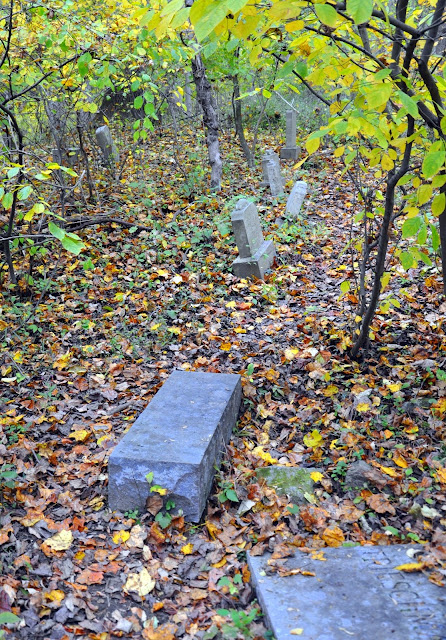 Another blogger found some interesting old photographs of Daniels, which are well worth checking out, at http://dynamicsymmetry.livejournal.com/1375397.html


Daniels is a testament to the power of nature to reclaim its own; a humbling reminder that our lives and the world we take for granted are not permanent. We wondered about the lives of those who'd lived in Daniels as we walked the old road. I wondered about their hopes and dreams, and I wondered whether their ghosts still lived in this forgotten ghost town.

To get a trail map of the Daniels area of PVSP, click here.

Getting there: The Daniels Area can be accessed off of Daniels Avenue, and also from Alberton Road (trail access only in this area). Take Route 40 West to the second light, which is Rogers Avenue. Turn Right. Follow Rogers Avenue to Old Frederick Road. Turn right. Then turn left onto Daniels Road.

To get to the Alberton Road trail into the ghost town, take US 29 north to the end, turn right onto Rogers Avenue. Follow Rogers to the roundabout, then turn left onto Old Frederick Road. Follow Old Frederick Road; eventually it turns into Holifield Road after it crosses the Patapsco River. Hollifield Road Ts at Dogwood Road. Turn left onto Dogwood, then almost immediately left on Alberton Road and the trail's parking lot. The trailhead for the Alberton Road Trail into Daniels is hard to find, but click here for Google Maps directions.

Dogs: But of course!! 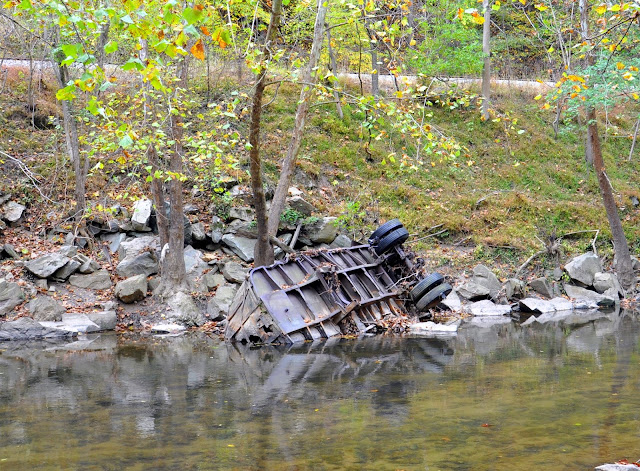