Rivers, Bridges, and Views, Oh My! 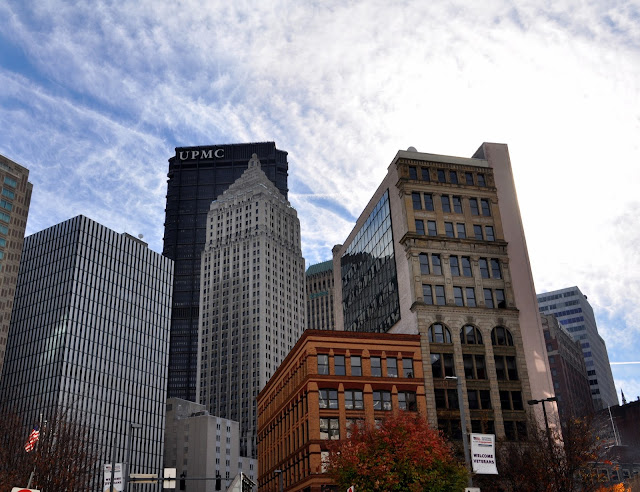 I'd never thought highly of Pittsburgh. The city and its inhabitants were the butt of jokes when I attended Penn State, and as an adult, I'd never had the opportunity to go there. My sense of Pittsburgh was of a city clouded with coal-induced smog (don't ask, but I guess I watched one of those weather shows), so I was pleasantly surprised by a weekend stay there recently.

It really is a pleasant city. A local I chatted with called it a "small town with big buildings."

My husband attended a Magic the Gathering tournament while I explored the city, which meant our "base of operations" was a hotel near the convention center. I left the day to chance and didn't do a lot of research ahead of time. I knew vaguely that Fort Pitt should be on the itinerary, as well as Fort Duquesne, and as I headed out of the hotel room that Saturday a.m., I was on my way to those two places. 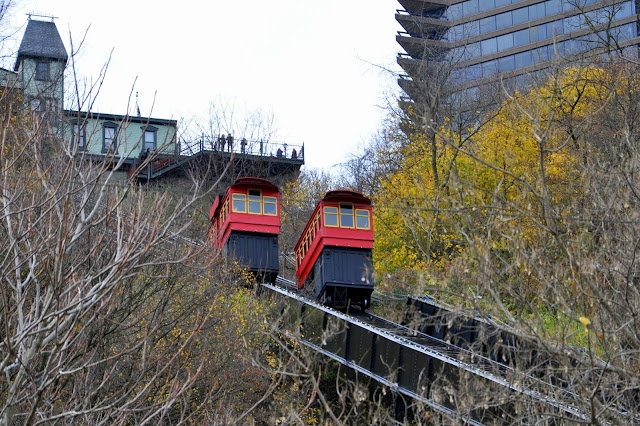 But I asked for directions from the hotel concierge, and he suggested I take an incline to Mount Washington for sweeping views of the city below, and offered the services of the hotel's shuttle to take me there. I thought that was a grand idea, and away we went. 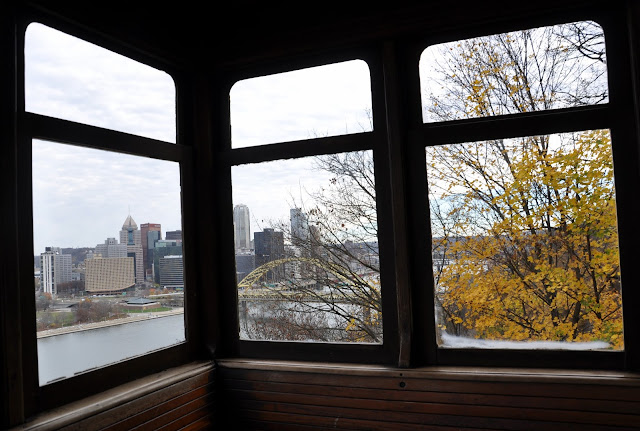 He brought me to the Duquesne Incline, which was built in 1877 to take folks who worked in the mills and factories in the flats along the south bank of the Monongahela River up and down the 400-foot bluff. Before it was built, they had to climb the "Indian Steps." At the time of its public opening, it was one of four inclines serving the summit of Coal Hill, which later came to be known as Mount Washington. 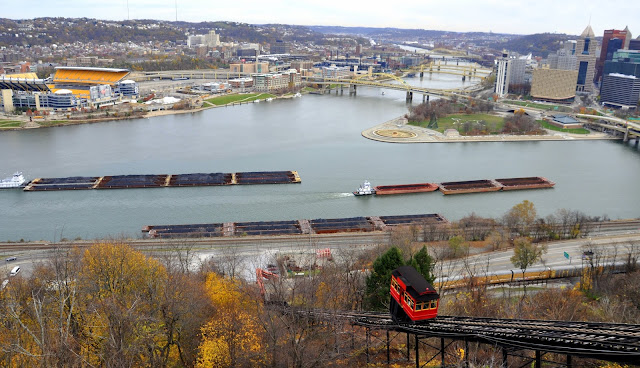 Like many old things, the Incline went into a decline, but was rescued and restored by a group of local residents in 1963. Interestingly, you can visit the interior of the incline and watch the machinery while it operates. The Duquesne Incline's upper station houses a museum of Pittsburgh history, including photos and a storehouse of information on inclines from around the world. The view from the Duquesne Incline's viewing platform has been voted one of the top 10 in the world by USA Today; you can see where the three rivers come together, as well as Heinz Field. It was cool to see three barges slowly pushing their load of coal, moving from the Ohio River into the Monongahela River. 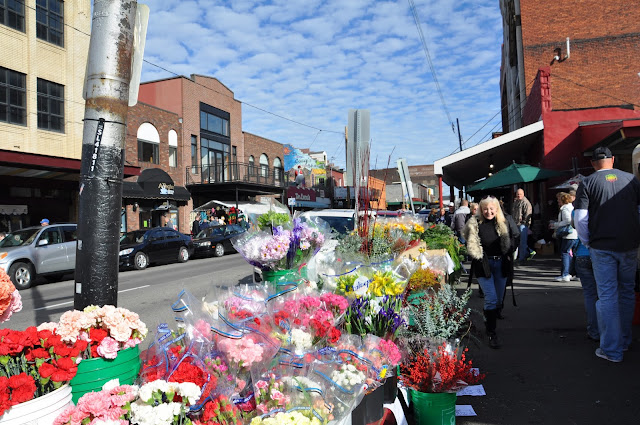 When the shuttle driver picked me up, he asked where I wanted to go next, but he suggested that I should check out a place every Pittsburgher goes to at least once: the Strip Market, an indoor/outdoor market with food, coffee, and cool things to browse and buy. I decided to go where the day takes me, so he dropped me off at the Saint Stanislaus Kostka Roman Catholic Church, in the heart of the market. I found the name of the church interesting, as I had just encountered another Saint Stanislaus Kostka Roman Catholic Church, in Daniels, MD., while writing the blog about Maryland's ghost town. 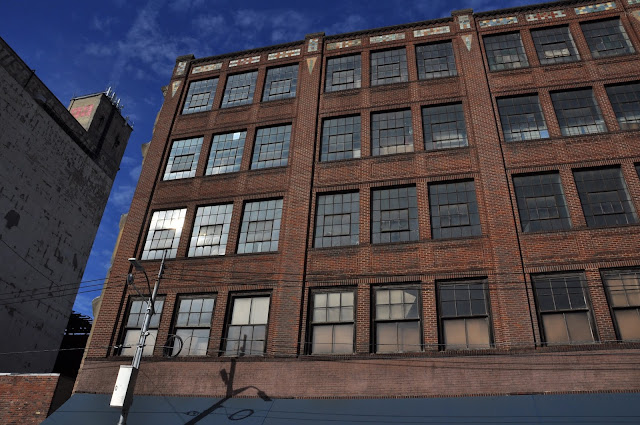 The Strip Market was interesting and fun -- a good place to grab a bite to eat and get an early start on Christmas shopping. Several street musicians regalled shoppers with their tunes, not unpleasant. Since its founding, Pittsburgh’s Strip District has been a distinctive and vital part of the community. I spent an hour or more browsing and shopping, and taking photos. With the holiday season around the corner, I noticed there were Christmas tree ornaments aplenty. But there also were vendors hawking Steelers, Pirates, and Penguins regalia, and trinkets of every sort. A variety of ethnic food choices also were available.

This parcel of land was first owned by noted Pittsburgh residents James O’Hara and George A. Bayard. In 1814, the pair established the area naming it “Northern Liberties of Pittsburgh.” It was more commonly known as Bayardstown. In 1837, the area joined the city, becoming Pittsburgh’s fifth ward. With its location adjacent the Allegheny River and subsequent convenient access to shipping lanes and raw materials, the area soon became a thriving industrial center. Foundries, mills, and factories moved in. Remnants of The Strip’s past are evident everywhere from the old Produce Terminal buildings to the idiosyncratic widths of streets and alleys. 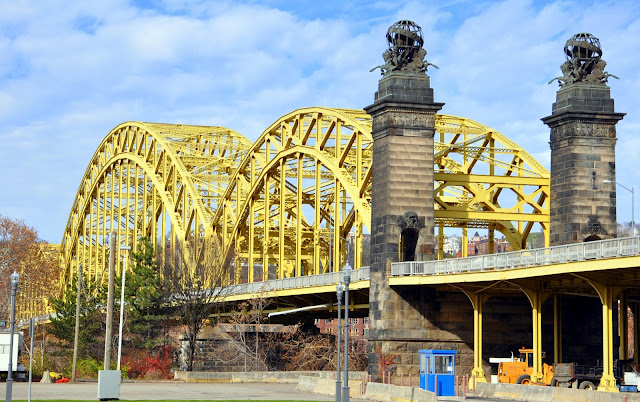 From the Strip Market, I walked along the Allegheny Riverfront. It was neat to see the bridges up close, and I appreciated the detail of the bridges, especially Veteran's Bridge. As I was walking along the riverfront, a long train curled along the tracks and over the train bridge, the cars clanking and brakes squealing as it slid to a halt -- quite exciting to be almost exactly beneath it! The river itself was empty -- it is November, after all. But I imagined that in the summer it would be much more active, with recreational users as well as barges and other river traffic.

After dinner my husband and I walked around downtown Pittsburgh some more (okay, I admit it -- we were playing Ingress and hacking portals and completing missions). We saw the city begin putting on its holiday finery -- trees were starting to be lit, and the wonderful pantheon of colored lights brightened up the streets. We enjoyed the walk. 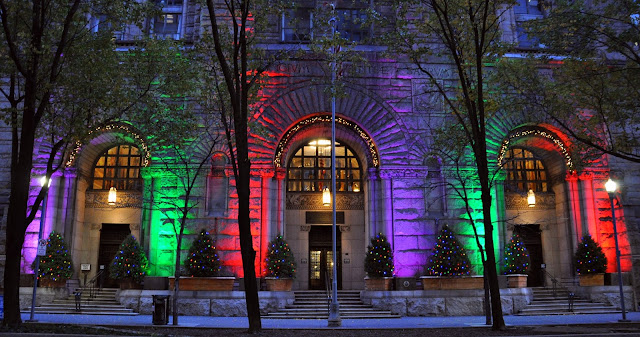 We ended the evening by driving up to the Mount Washington overlook platforms to see the city at night, and were impressed by the beauty of Pittsburgh. Yeah, didn't expect to write that phrase. 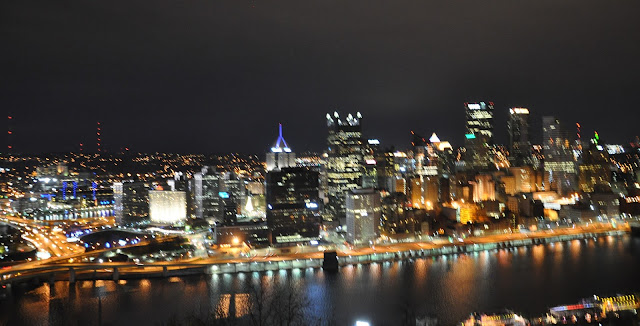 Getting there: The Duquesne Incline is located at 1197 West Carson Street, Pittsburgh. The Strip Market runs from 11th Street, across from the David L. Lawrence Convention Center, to 33rd Street. The Mount Washington Overlook Platforms are located at 438 Grandview Avenue, Pittsburgh. 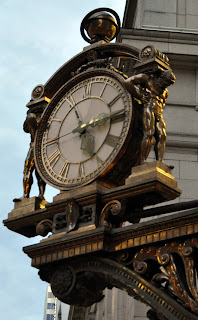 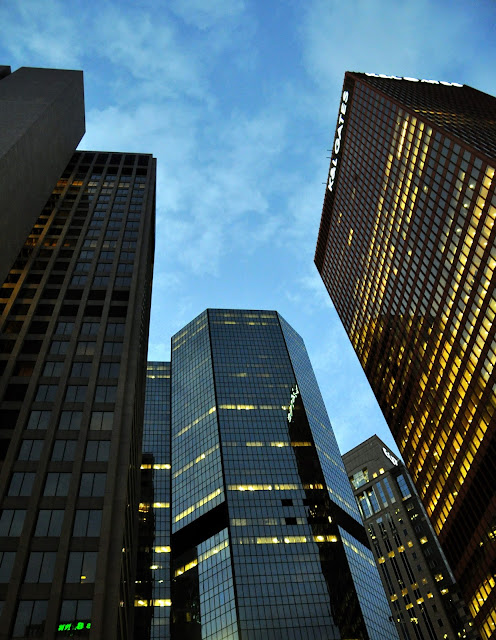