On a hilltop overlooking the Patapsco River Valley, stabilized ruins sit serenely in a park just above Ellicott City. I've known vaguely that these are the former Patapsco Female Institute, which was founded in 1837 as an elegant finishing school for young women. Despite living in Ellicott City for almost two decades now, only recently did I finally explore the ruins. 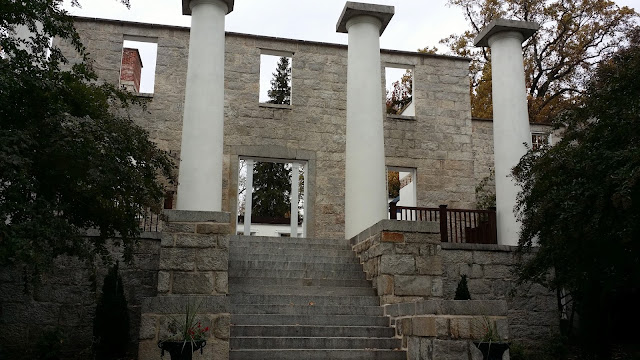 The school operated until 1891. Since then, the buildings served as a private residence twice, as well as a hotel and theater. Since 1966 the building has been under the care of the 'Friends of the Patapsco Institute.' Now, the Patapsco Female Institute (PFI) most often serves as a popular wedding venue and an annual haunted house. Supposedly it's haunted, but the sense when I toured the site was of peace and beauty. 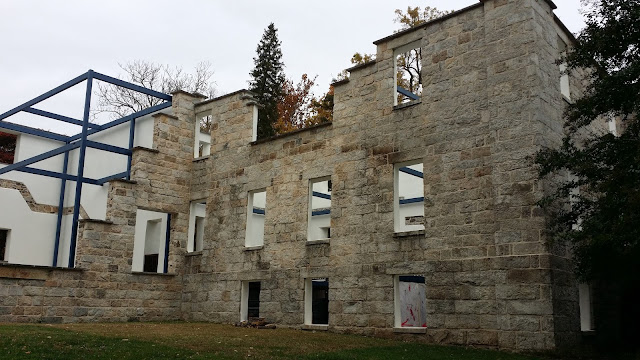 Regular readers of the blog know I love me a good ruin. A trip to Ireland last April only wet my appetite! (And yes, that trip is likely to show up in this blog!) I've known about the PFI for years, but it was in pursuit of an Ingress mission (Ingress is a game played on mobile phones, which imposes a virtual world of portals in a scenario of benevolent (or is it?) alien invasion on real world landmarks) that brought us to the park on an October Saturday. It's a good time to go -- the trees are gorgeous!

A steel frame inside the ruins stabilizes it from further deterioration; deck-like flooring on the "first floor" allows you to walk around inside on the first level; the basement is paved with brick. A skin of concrete on the inside protects the walls as well as shows where stairs climbed between the levels.

The granite faced, Greek revival structure housing 100 students was built on 12 acres of land in what was then called Ellicott's Mills (it didn't get renamed Ellicott City until much later). Its proximity to the B&O Railroad and the National Pike made it an attractive location. A waterworks, greenhouse, servant's quarters, and facilities for male teachers were built on the grounds. Classes consisted of Latin, mathematics, music, religion, and philosophy. 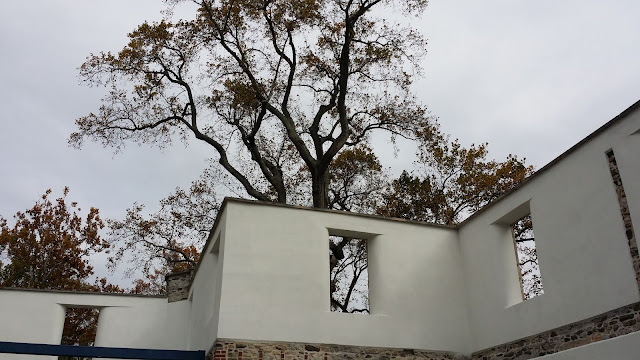 Between 1841 and 1855, the school was operated by Almira Hart Lincoln Phelps, an interesting figure in her own right. Phelps, a slaveowner but yet still a Union supporter, accepted students from both the North and the South to encourage friendship between the two sections of the country. During her tenure, the school expanded from six teachers with forty one students to eight teachers and nine staff with seventy students. Phelps, while raising two families, teaching, and leading seminaries for young ladies at various places, also wrote extensively, authoring 14 books, including Familiar Lectures on Botany (1829) and Lectures for Young Ladies (1830). 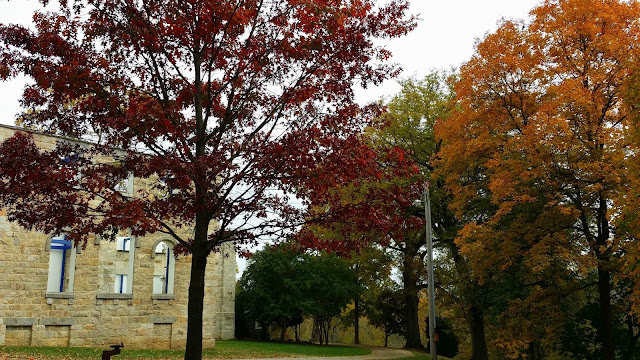 During the Civil War, the 12th New Jersey Infantry Regiment camped near the Institute's grounds in 1862 while guarding the B & O Railroad against the Confederacy's advance.

In 1917, during the First World War, the building was called into service as a hospital. It was fitted with 50 beds to accommodate wounded veterans returning to the States. 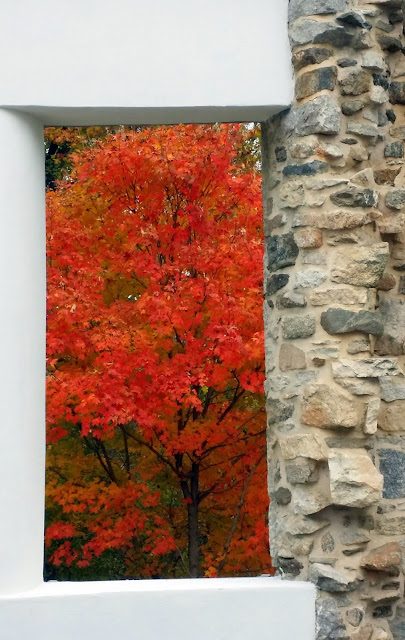 Know before you go: Signs indicate the park is open from 11 a.m. to 4 p.m. on Saturdays and Sundays April through October (except when closed due to a private event). However, we fortuitously showed up at 1:30 p.m., at the same time as the docent, who that day was splitting her time between the PFI and a log cabin down in Ellicott City. So if you go, go at 1:30 p.m. and wait a few minutes for a docent to show up. Chances are, you'll receive a private tour!

Hours: Tours are on Saturday and Sunday at 1:30 p.m., April through October. Private and group tours are available year-round, weather permitting. For more information and scheduling special events and rentals, call 410-313-0420.