I call this the lost post because I had this article almost completely written -- I was just feeding in the photos, when my beagle, Meeko, sat his big fat hairy butt on my little laptop and butt-erased most of the post.

I was more sad and discouraged than angry -- I'd just spent a couple hours researching and writing it, but it was my own fault for not being more careful with my laptop. I closed my laptop and tried to forget about it.

A year later, I wish I'd not shoved this lost post away! So here it is, just over a year later. Re-researched and rewritten, and ultimately, resurrected! 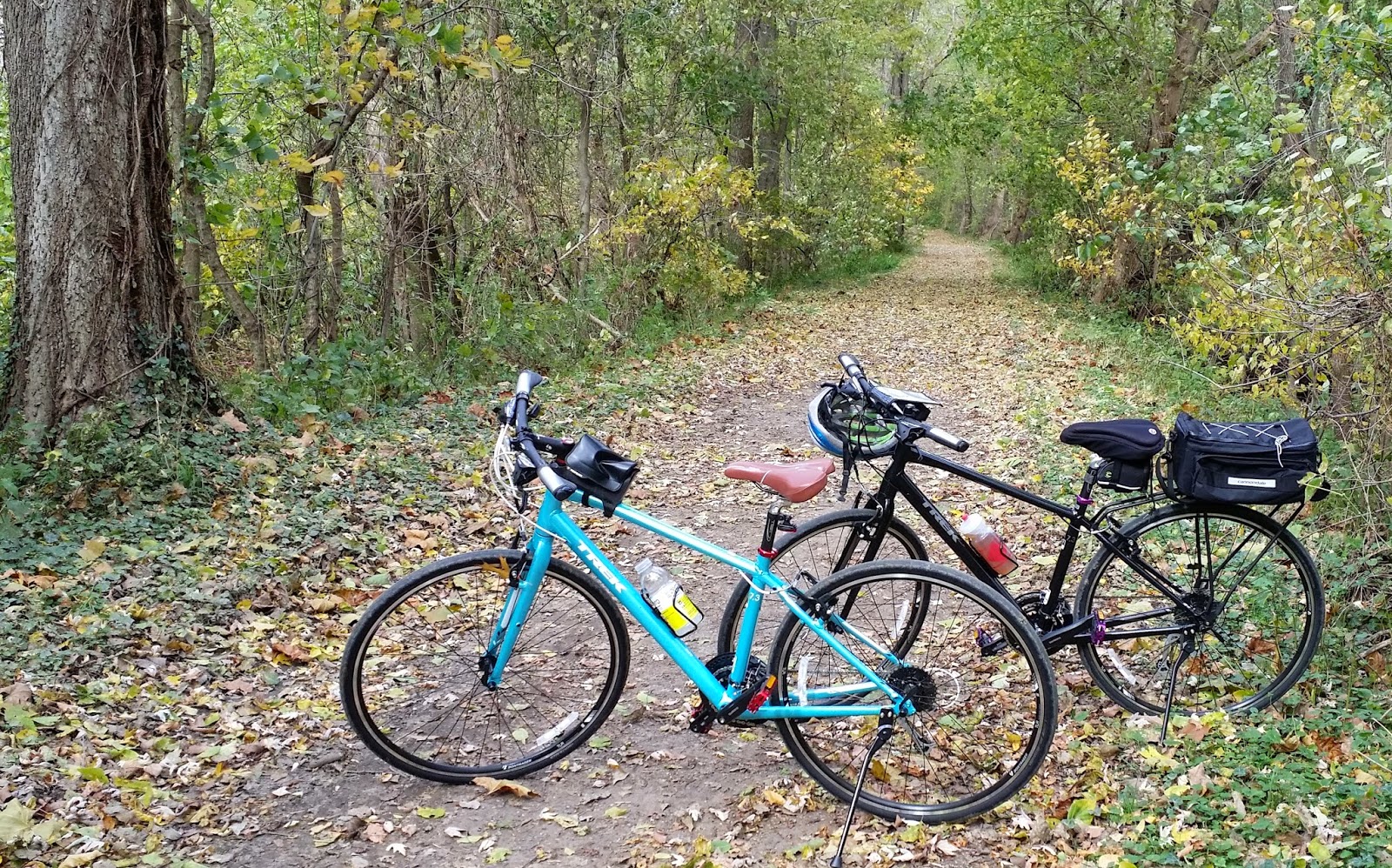 Until there's snow on the ground, I plan on continuing biking. With that in mind, my friend and I braved 44 degree weather in early November (2014) and headed out to one of my favorite destinations: the C&O Canal towpath, to test out our new bikes. Despite the occasional wind gusts and chilly weather, the leaves were still on the tree and the trail still pretty, and the forecast promised a sunny afternoon. 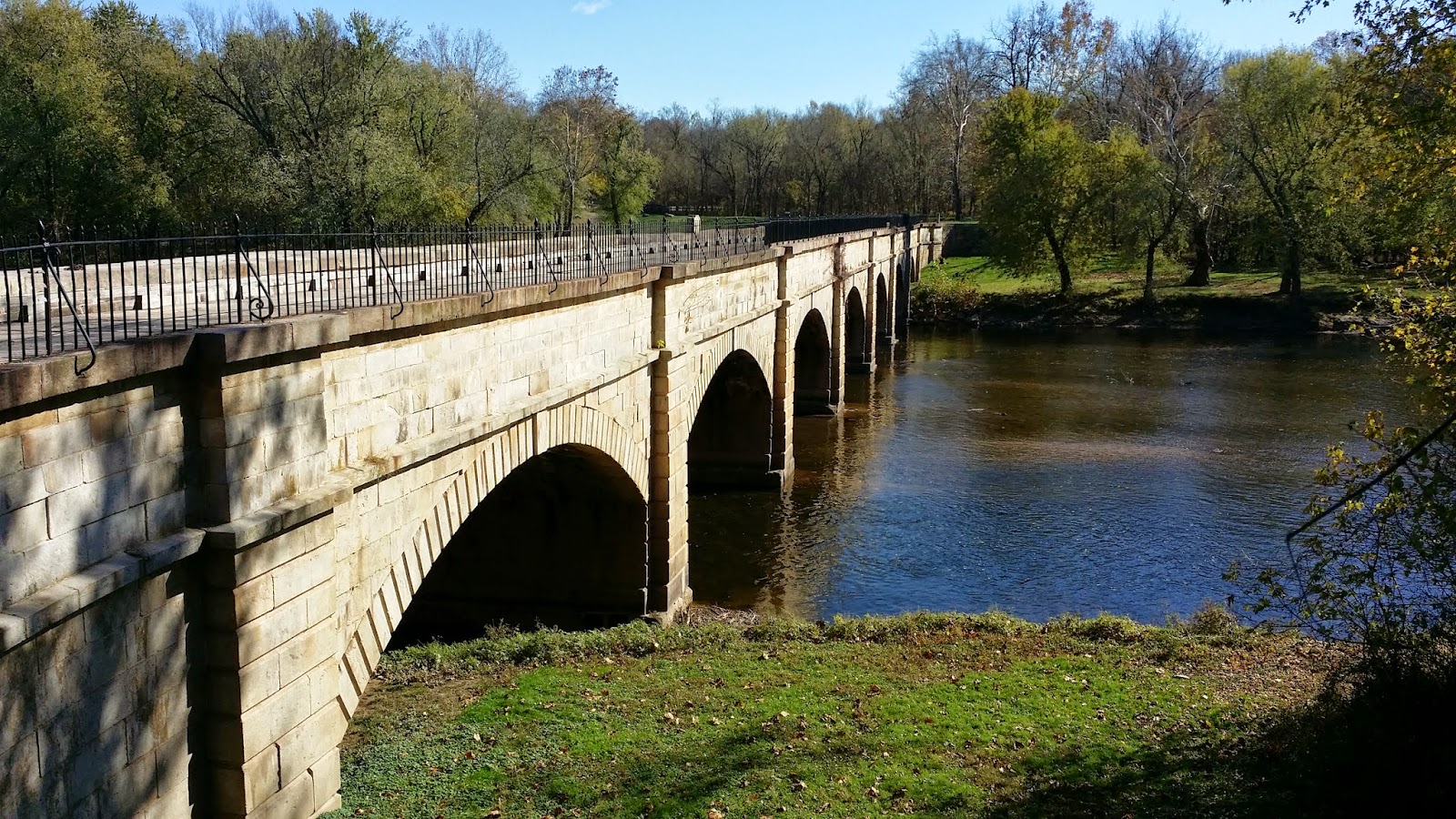 It seems like only a few weeks ago I had been writing with a great deal of excitement about purchasing my Electra Townie! But in fact, it was last January, and over the past 10 months, I've logged close to 300 miles on the bike, riding the B&A Rail Trail, the NCR Rail Trail, the Heritage Rail Trail, and the Indian Head Trail. But the recent Pedal Through History bike ride proved to me I needed to upgrade to do the type of riding I want to do. So I'd been looking for a comfortable hybrid that was both sturdy and capable of handling unpaved (but groomed) trails, but could more easily climb hills than my comfortable but way too heavy cruiser. So recently, my friend traded in her under-used mountain bike and I traded in the Townie for the sleeker, more agile Trek FX 7.3 hybrids.

The stretch between the two aqueducts came recommended by my sister, who frequently runs that stretch with her running club. We found the parking lot off of Mouth of Monocacy Road (near Rt 28 in Dickerson). Conveniently, there are bathrooms on the site (okay, glorified portopotties, but still convenient). We'd been assured that the Trek FX hybrids could handle the C&O Trail, but now we would test it out.

The Monocacy Aqueduct is the largest aqueduct on the Chesapeake and Ohio Canal, crossing the Monocacy River just before it empties into the Potomac River in Frederick County, MD. Sitting in the shadows of Sugarloaf Mountain, the 438-foot aqueduct was built between 1829 and 1833, with stone quarried from the base of Sugarloaf. From 1833 to 1924, the aqueduct carried the canal waters over the Monocacy River. Thousands of boats, boatmen, and mules, and millions of tons of coal and other cargo passed over the aqueducts. And for the most part, it's withstood the test of time: multiple floods rushing down the Monocacy River washed tons of debris against the aqueduct over the years; Confederate troops tried twice to blow it up, but it endured until finally, Hurricane Agnes in the early 1970s weakened it, almost to the point of no return.

In fact, the Monocacy Aqueduct survived to our times, even though it was on the endangered list for about 30 years, steadied by an outer skeleton, a steel banding system intended to stabilize the structure and a steel rod reinforcing system. to steady it, until it was restored in the spring of 2005 to its former glory. 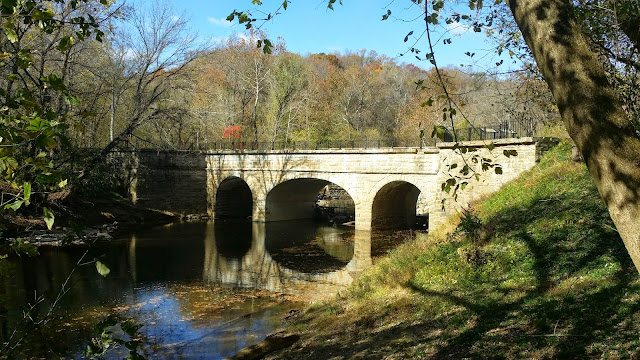 The C&O Canal used 11 aqueducts to carry the canal over rivers and streams that were too wide for a typical culvert. We rode to another of the aqueducts: the Catoctin Aqueduct, which crosses Catoctin Creek in Frederick County.

This aqueduct, completed in 1834, was also called the "Crooked Aqueduct" because of the sharp turns before and after it on the canal. Recklessness among boatmen (usually because of speeding) resulted in accidents, damaging the sides of the aqueduct, causing the nation's first speed trap to be set up -- no, I'm joking. I just made that up. However, in March 1870, the Canal's board of directors ordered that all boats should slow down 50 yards from the aqueduct, and stationed a watchman to ensure that they did, indeed, slow down! 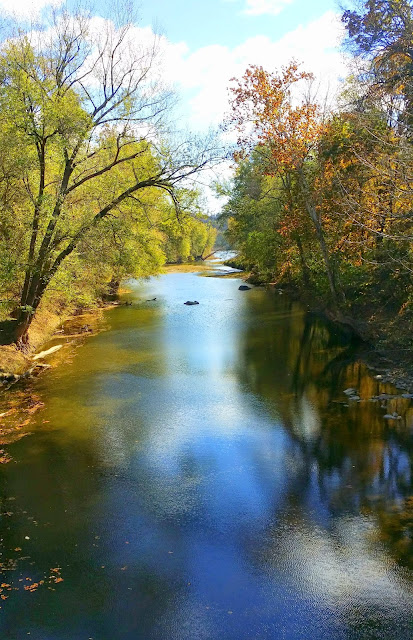 The cool thing about the Catoctin Aqueduct is that it was made of granite from Ellicott Mills, Maryland -- yeah, that's where I live. The uncool thing is that this aqueduct was cited as the "worst built" aqueduct on the canal, and it had serious leaks throughout its life as an active aqueduct. Oh well! The cause of its instability was the two arches used in its construction: elliptical in the center, and Roman on the side, the two stresses do not balance each other, and are prone to failure. Finally, it sagged badly in 1926, eventually collapsing in October 31, 1973.

If you hike or ride this stretch, you'll notice that this is a really pretty stretch of the canal! Of note in this stretch is Lockhouse 28, which was built in 1837. 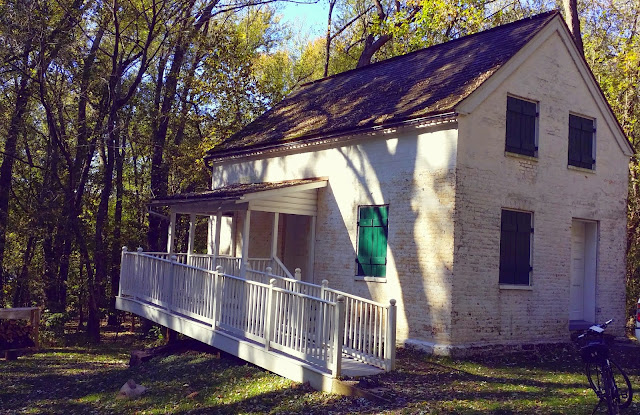 This lockhouse stands as a reminder of the fierce competition between the Chesapeake & Ohio Canal and the Baltimore & Ohio Railroad in the race to reach the Ohio River Valley. At Point of Rocks the land between the Potomac River and the rocky outcropping becomes precariously narrow. Both companies knew ownership of this strip of land was imperative to winning the race to the Ohio. Adversaries in the courts for four years, both canal and railroad were given rights-of-way, with the C&O Canal allowed to build next to the river, and the B&O Railroad forced to carve its way through the hillside just above the canal.

Today, Lockhouse 28 is a rustic retreat, situated between the scenic Potomac and the still-active railroad tracks. 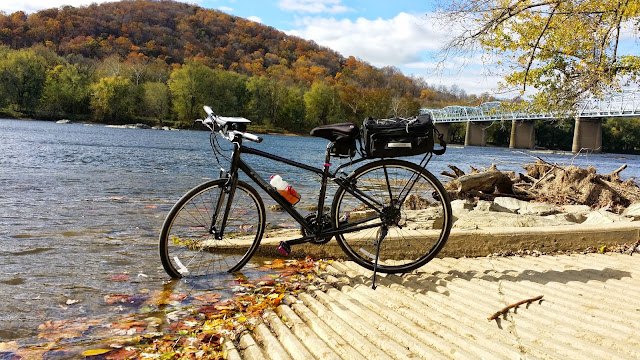