This is the last of five posts about our late summer trip to Mackinaw City and Michigan's upper peninsula; we visited the area after bringing my son up to college in Michigan. 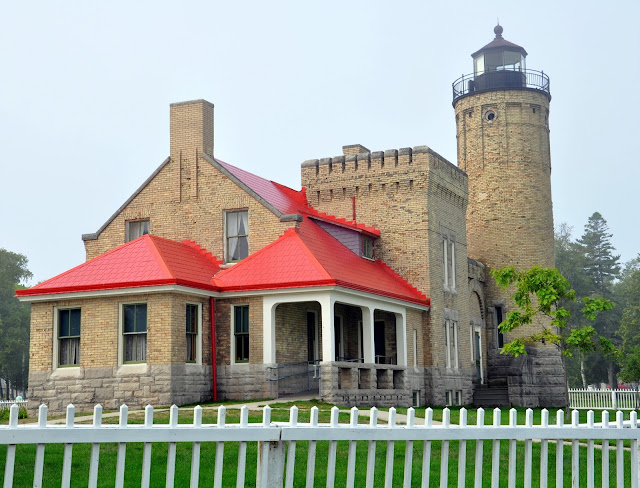 McGulpin Point Light was constructed as a navigational aid through the Straits of Mackinac. The light began operation in 1869, making it one of the oldest surviving lighthouses in the Straits. The light is located on McGulpin Point, approximately 3 miles west of Fort Michilimackinac.

The McGulpin Point Light, a true lighthouse with a light tower and attached lighthouse keeper's living quarters, was completed by the U.S. Lighthouse Board in 1869. The living quarters were built as a vernacular 11⁄2-story brick structure. The lighthouse operated during the Great Lakes navigation seasons from 1869 until 1906. 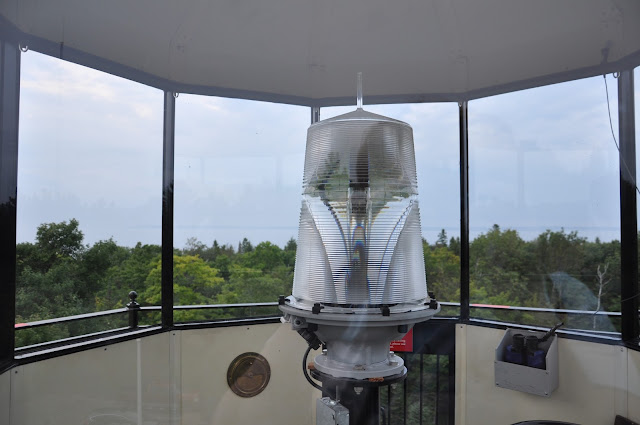 The design was so successful that the Lighthouse Board chose to use the Norman Gothic design in for several other lighthouses, including the Eagle Harbor Light, the White River Light, and the Sand Island Light.

On our way back to Maryland, we decided to take U.S. 23 and drive south down the coast of Lake Huron, visiting some of the lighthouses as we went; we figured it would take us an extra day or two, counting in the time it would take to go to the various lighthouses.

We went to Cheboygan Crib Light (pictured above) and drove by the Cheboygan River Front Range lighthouse, which was closed at the time.

The Cheboygan Crib Light was originally located offshore on a concrete platform and marked the water intake pipe for the city of Cheboygan. It is a quaint little light, however, and picturesque.

But it was at the Cheboygan River Front Range lighthouse, which was closed the day we were there, that I learned that Michigan seems to take care of its lighthouses, which explains the restoration and period-furnished lighthouses I'd been seeing. Hooray for Michigan! The Michigan Lighthouse Assistance Program provides matching grants for the preservation and restoration of lighthouses and is funded through the purchase of Michigan lighthouse license plates.

One of my favorite lighthouses is Forty Mile Point Lighthouse. It was established in 1896. The house part of the lighthouse is being restored -- at least, half of it. The other half will house the park staff. 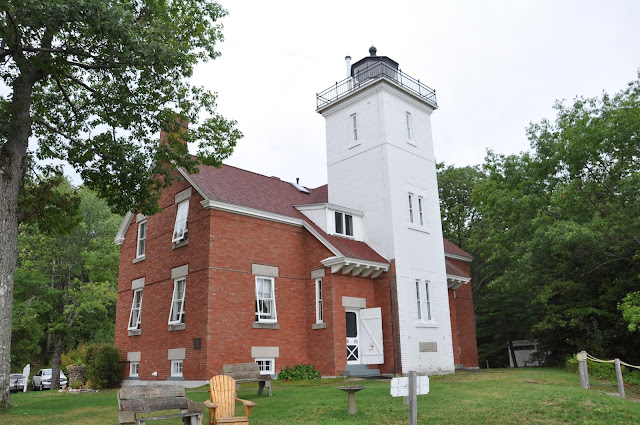 Originally, the lighhouse was divided into a duplex, with the head lightkeeper and his family in one, and his deputy and his family in the other. This, of all the lighthouses, really captured my imagine. I loved how the furniture reflected the early 1900s and the decade after 1910 (one of my favorite eras thanks to a school report I wrote in 6th grade). A lady's beautiful black dress was laid out on the bed and I noticed a photo on the wall above the bed showed one of the lightkeeper's daughters dressed in that outfit. It was a cool moment. How fun she must have been! 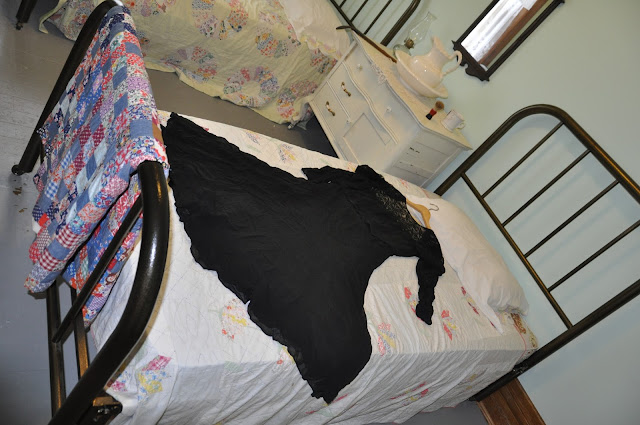 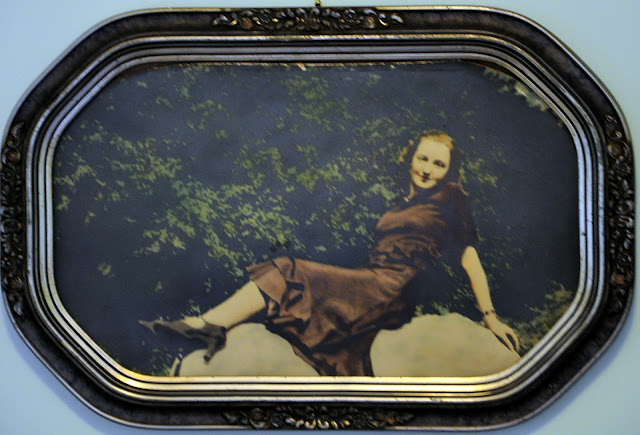 Like most of the other lighthouses, we were able to go to the top. I ooohed and awwed appropriately, but -- and I hope the various lighthouse societies all forgive me -- a lens is a lens to me. The really exciting aspect of this lighthouse is the shipwreck just down the beach from it. This is the wreck of the S.S. Joseph S. Fay, a wooden steamer built in 1871. The Fay was among the first of the Great Lakes freighters built for the iron ore trade. A 130-foot section of her starboard is still visible on the beach, although it's "just" some rotting planks and metal spikes and rods left (so step carefully so you don't impale your foot OR damage the remains further). The Joseph S. Fay ran aground in October 1905, in heavy seas. We walked along it silently, thinking of this ship and those who served on it. 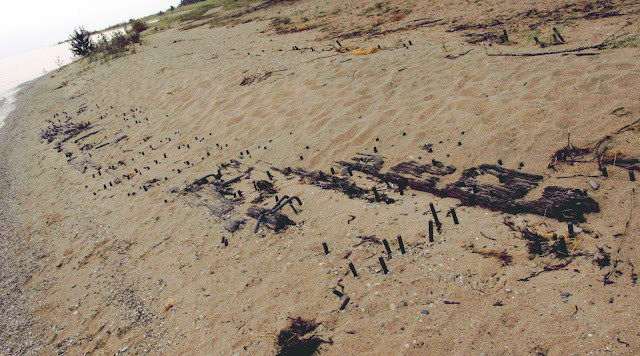 The last two Lake Huron lighthouses we visited on our drive down the coast were the Old and New Presque Isle Lighthouses. I enjoy lighthouses but I'm not endlessly fascinated by them... in other words, I got a bit lighthoused out. And with the fog and rain, at that point I really wanted to head to our hotel for the night and just watch a movie on tv and relax. Yes, right now I'm kicking myself, but that seemed the right decision at the time. 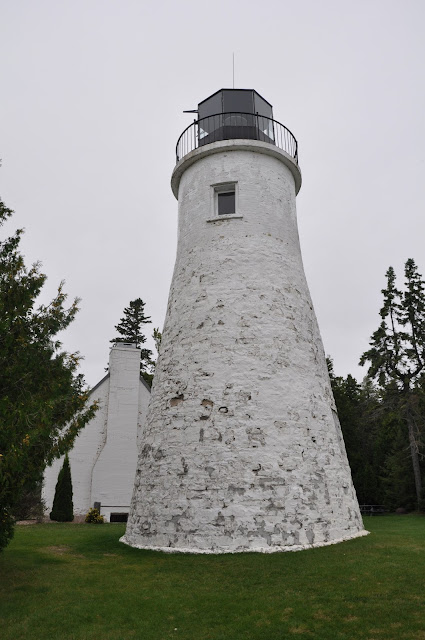 The Old Presque Isle light is interesting, because the bottom half is conical in shape, while the top half is round. It sits away from the lightkeeper's house. Both look primitive compared with the more recently built lighthouses, but that's because it was constructed in 1840. However, the shore of Lake Huron was splendid there -- the fall colors and the mist and fog on the water combined to create a lovely, mysterious effect.

The new Presque Isle Lighthouse was built in 1870 to replace the old lighthouse, which wasn't tall enough to reach far enough out to help the ships who needed it. This was where I chose not to climb to the top, mostly because to me, most of the tops look the same -- I really don't know the differences in the lenses and the machinery. I was polite in declining to pay for the fee to climb to the top, but the gal at the desk visibly sneered. I felt somehow, ridiculously, inadequate! Funny in retrospect, but at the time, it briefly bothered me. 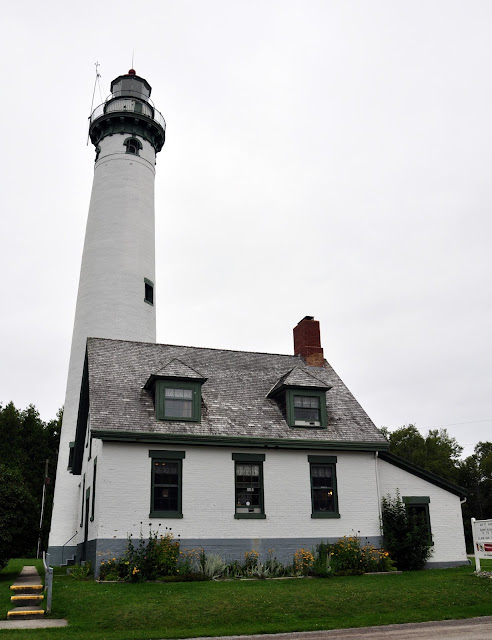 The next day was as sunny as the previous day gloomy and rainy, so we decided to fit in one last lighthouse: the Old Marblehead Lighthouse on Lake Eerie. This lighthouse, like Old Presque Isle, was also built in the early 1800s, of stone, in 1821. Maybe because it was a sunny day, but it seemed so much prettier. It is perched on the stone shore, near Sandusky, OH. It is worth noting that this light is still active and is the oldest operating light on the Great Lakes! It was the perfect lighthouse to end our trip with. 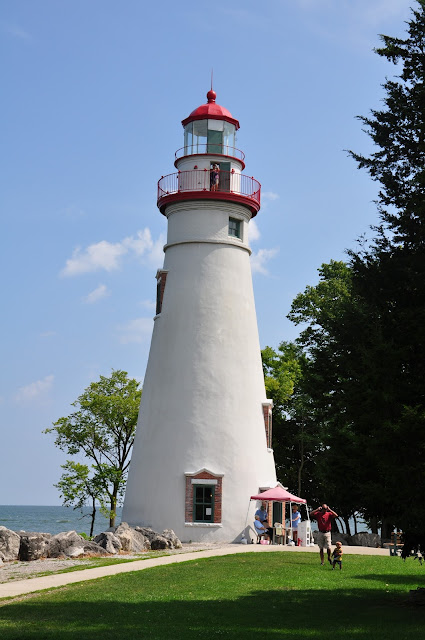 Have you daytripped somewhere interesting? I'd love to hear what you're doing! Email [email protected] if you're interested in being a guest-blogger!
Posted by Jody Arneson at 10:14 AM